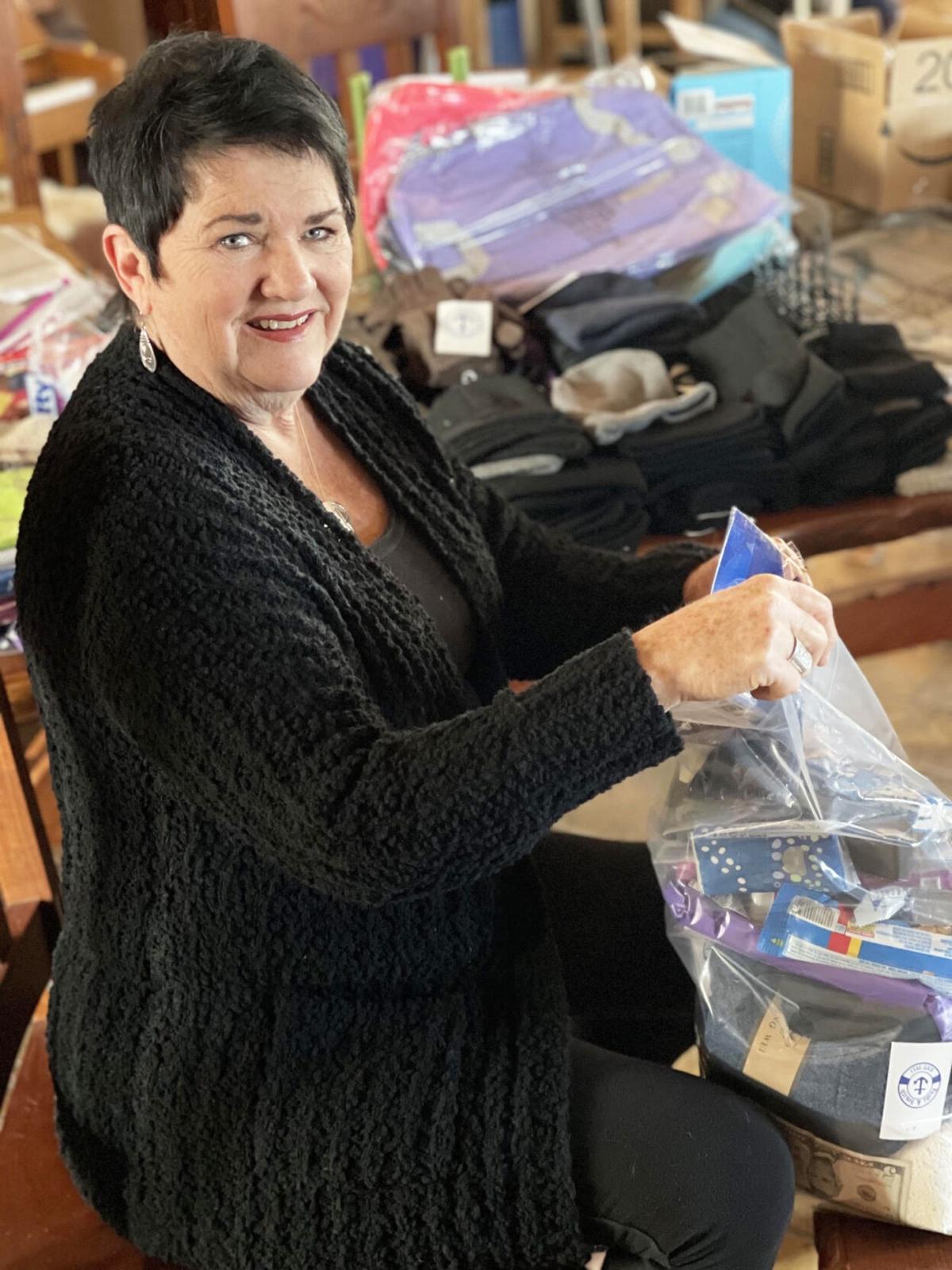 Mary Visco of Elgin fills a see-through bag with essentials in preparation for donating it to a homeless person. 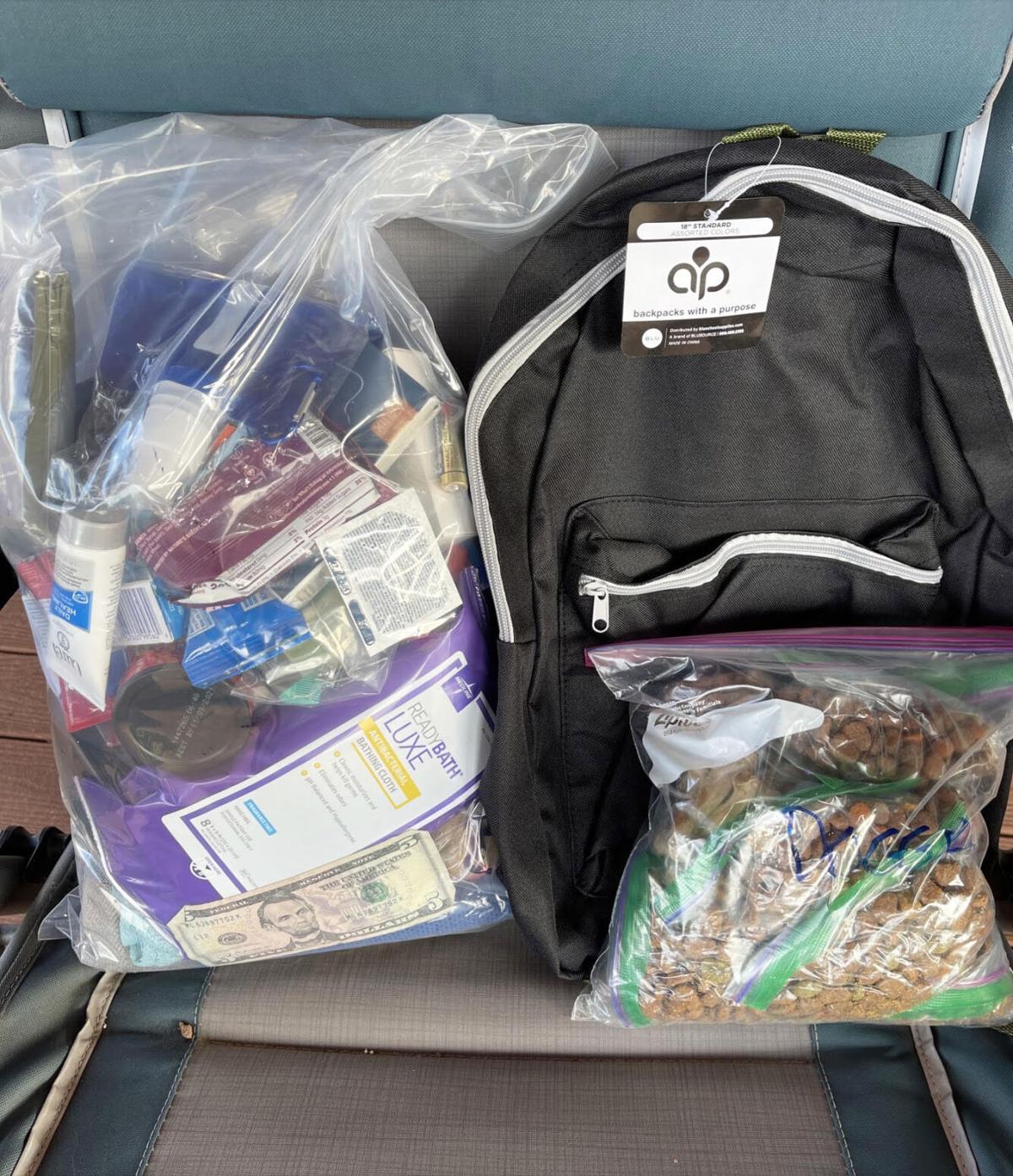 Visco also rovides a knapsack to make the heavy bag easier to carry. If the recipient has a pet, she also gives them a week’s supply of dog food.

Mary Visco of Elgin fills a see-through bag with essentials in preparation for donating it to a homeless person.

Visco also rovides a knapsack to make the heavy bag easier to carry. If the recipient has a pet, she also gives them a week’s supply of dog food.

Mary Visco has a special knack for looking into the eyes of someone in dire straits and not only feeling empathy for the person, but also instinctively seeming to know what the person needs to survive and better cope with their situation.

This talent came to the forefront one day soon after the COVID-19 pandemic started.

Visco was running some errands in Tucson when she came to a traffic light and saw a forlorn-looking woman, with her dog by her side. She was dressed in ragged and dirty clothes, begging on the median. A few hours later, as Visco entered the underpass to downtown, there was a man huddled on the sidewalk, shivering, who looked up at her with sad eyes. He also had a dog as his companion.

As she drove back home to Elgin, she pondered what she had seen, wondering how this could happen in America and why there isn’t enough done about it. That led her to wonder what she could do – probably not much, she thought, but maybe something that might make a small difference to a few people.

As she continued thinking through a myriad of possibilities, she realized that the main priority for her, if she were ever unfortunate enough to end up homeless, would be to keep warm, and have something to eat as well as a few personal hygiene items. That started her on a quest to find specific, durable items that she could pack in large, see-through bags to hand out.

Her Amazon Prime research led her to a hooded parka called an energy poncho, made with a heated blanket. She ordered a number of them on the spot, along with a space blanket. Soon she was adding wool socks, stocking hats, gloves and even a hand-warmer. For hot days, she purchased cooling towels which can be dipped in cold water, wrung out and wrapped around the neck to help keep the heat out.

At the rate she was collecting items, her living room, den and even the bedroom had tables piled high with things to be loaded into the two-and-a-half gallon see-through bags.

It wasn’t long before she had to switch to three-gallon bags to contain all the items. That made the bags very heavy, so she ordered knapsacks.

When she drives ups to a prospective recipient, she rolls down the passenger window and asks the person to reach in and take out the bag. Then she tells them to take the knapsack so they won’t have to carry the cumbersome bag around by hand.

Visco said she doesn’t offer her bags to homeless shelters because she feels that they receive donations and are able to offer those staying with them food, clothing and the chance at a hot shower. She concentrates her efforts on those people who, for whatever reason – mental health issues, substance abuse problems, or overcrowded shelters – end up living in the desert or under a railroad trestle or a freeway overpass.

One of the more unusual items Mary donates is a harmonica. “I thought, when they are sitting there in the cold and the dark they could have something to play with and entertain themselves,” she explained.

Thinking of the dark, she also decided to include firestarter and box matches. Then came vitamins, health bars, mixed nuts, beef jerky and candy bars. Many small personal items are also included, such as soap, shampoo, nail clippers, combs, moisturizer, Kleenex, toothbrush and paste, hand sanitizer and a sewing kit.

When her friend Elen Kentnor saw what Visco was doing, she made up a supply of dog food packs, which sparked the idea to continue providing them to people accompanied by a pet.

Once Kentnor and Mimi Henley finished up their own project of making thousands of face masks for donation, they donated their leftover masks to Visco’s project. Kentnor volunteered to deliver to people in need whenever she was in town, and her husband Charlie Kentnor donated $100 worth of $5 bills to include in the bags.

The idea was that when the person reaches into the car and sees the $5 front and center, instead of the $1 most people give, their eyes light up. Visco has continued supplying $5 ever since.

Other friends who have helped with the deliveries include Sandy Cowan and Leanné Whitewolf Charlton. As Charlton was driving away from one of her drop-offs, she looked in the rearview mirror and saw that a man who received the bag was hugging the wool socks to his chest.

When Visco sees someone on a street corner, there is usually no place to pull over, so it has to be a quick transaction. Many times she or her husband Ray drive on side streets and behind shopping centers to make sure they are getting to the people who have no other resources.

Since she started the effort, Visco has probably passed out more than 60 bags full of necessities in Tucson, Nogales, Sierra Vista and Naco.

Her project is starting to wind down now, but she has enough supplies left to pass out about 100 more bags before she runs out. The main problem is delivery, and anyone interested in helping in that regard can contact her at mary@maryvisco.com.