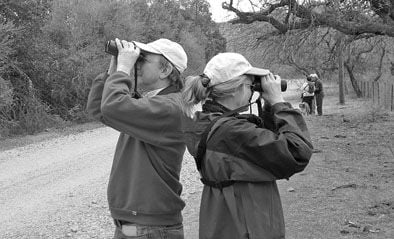 Dan Anzia and Jill Anderson of Chicago, Ill., scan the sky for birds on Santa Gertrudis Lane. The two extended a business trip hoping to add birds to their "Life List' of species. Below, Armed with a powerful lens, Karen Ford of Tucson got into serious birding last year when her husband retired from IBM. Photos / Mary Donnelly 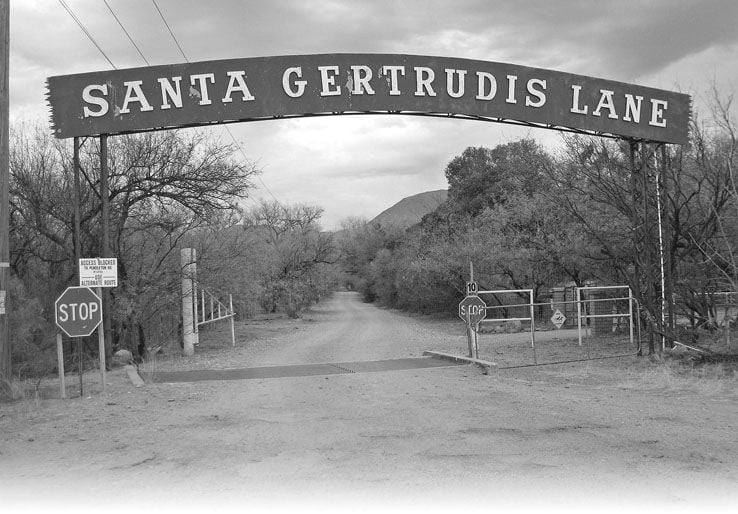 Birders park at the entrance to Santa Gertrudis Lane and walk down the private road to the river hoping to see some of the hundreds of species that live and migrate along the Santa Cruz River.

Dan Anzia and Jill Anderson of Chicago, Ill., scan the sky for birds on Santa Gertrudis Lane. The two extended a business trip hoping to add birds to their "Life List' of species. Below, Armed with a powerful lens, Karen Ford of Tucson got into serious birding last year when her husband retired from IBM. Photos / Mary Donnelly

Birders park at the entrance to Santa Gertrudis Lane and walk down the private road to the river hoping to see some of the hundreds of species that live and migrate along the Santa Cruz River.

Santa Gertrudis Lane, just south of the historic Tumacacori Mission on the east Frontage Road near Tubac, is for the birds – literally. On any given day you may see from two to 20 cars parked at the road’s overhead sign. Down the tree-lined, privately owned dirt lane that ends at the Santa Cruz River visitors stroll, binoculars in hand, waiting to spot birds, birds, birds.

“This is one of the best bird-watching places in Southern Arizona right now,” said Jill Anderson, a Chicago native who was taking an extra day of vacation with her partner, Dan Anzia, ending a business trip to Tucson. “We read about this place online and, luckily, ran into it when we were looking for the Anza Trail. It’s been terrific.”

The lane, once a major crossing of the Santa Cruz River, was closed to public traffic two years ago when Burlington Northern Railroad deemed the rail crossing on the east side of the river to be unsafe. The closing was a hardship for folks living in the hills above the river, but the lack of traffic created a peaceful sanctuary for birds and wildlife residing and migrating along the river.

The river corridor from Tubac to Tumacacori includes the Anza Trail that is a popular destination for birding and hiking. The lane is posted as private property and visitors park on the frontage road and stroll the ¼ mile to the river.

Anderson and Anzia said they were seeing birds that aren’t native to their Chicago skies, mentally checking them off their personal “Life List.” A “Life List” is the ongoing list of birds seen in a person’s life, explained Anderson. Her list is long. She began bird-watching at her grandmother’s feeders when she was 10. Anzia is a newcomer to the hobby with only a few years under his belt.

“Hey, I got someone here,” interrupted Anderson as her binoculars swept the pyracantha tree, alive with hundreds of birds after the drooping bright red berries. “Is it a Sage Thrasher? There’s a Spotted Toey on the ground there. too.”

As she pointed, several other bird watcherss scurried over to catch a glimpse of the birds. Cameras with powerful lenses clicked and smiles filled faces.

“We all sort of help each other out,” explained Ronna Laager, who winters with her partner, Art Herman, in Green Valley. “You get to meet people and everyone is so nice.”

“Birding is the top hobby in the world right now,” said Herman. ”It’s a big business – a $2 billion to $4 billion business – but the beauty of it is that anyone can do it without much equipment, really. It’s a great way to get outdoors.”

Laager said she has 640 birds on her “Life List.” Herman, a seven-year enthusiast of bird-watching is trying to catch up, he said. They have been to Santa Gertrudis Lane at least 12 times and are never disappointed by the variety of birds they spot. A few such as the Varied Thrush, native to the Pacific Northwest, and the Ruffis-back Robin, a Mexican bird not usually found around Arizona, are the “treasures” that bird watcherss seek out, they explained.

Birders post their findings on the Internet. Each of the birders seemed to have a favorite Web site, but the prize was always the same. Seeing an uncommon bird makes all the hours of looking up worthwhile, they said.  Laager and Herman once traveled to Georgia when they read online that a South Polar Skua, an Antarctic species, was on a lake there. There was only one, and they saw it.

Fairly new to birding, Rich and Karen Ford of Tucson started birding as an excuse to get outdoors. After Rich retired from IBM last year they “started getting serious” and now go birding several times a week. In the field, they snap photos on their Canon D-40 camera with a 100-400mm lens. At home they research their subjects on the Internet.

Fluttering waves of Western Bluebirds and Cedar Waxwings streaked across the sky at the Santa Gertrudis site as Karen Ford tried to catch the cloud of birds in mid-flight. In the trees, dozens of different species pecked at the berries, unconcerned with the other birds or the strangers with binoculars and cameras.

“I think that this is a year that is kind of scarce for food because of the lack of water,” said Laurie James of Tucson, who with her dog, Lily, and some human friends was making her first visit to Santa Gertrudis Lane. “I have only been doing this a couple years. This is fantastic.”

“It’s a desert and where there is water, there are birds,” said Peter Collins, an avid Tucson bird watcher who was checking off his “Life List.”  The click, click, click of his camera filled the air as he alternated between his binoculars and snapping photos. “You might call it catch-and-release hunting,” he said.

Collins said that although the Anza Trail, especially the area behind the Tubac Presidio State Historic Park, is much better known Santa Gertrudis Lane is gaining in popularity, especially this time of year when the berries are ripe.

Bird-watching is one of the most popular activities for “snowbirds” coming to Arizona. Birders from around the Tubac area meet each Tuesday to go to different locations around the area. In addition to Santa Gertrudis Lane, birders visiting Santa Cruz County and Southern Arizona might add some checks on their lists at:

Madera Canyon – By far the most famous location in Arizona for birds who come from all over the world to view the more than 130 species of birds including the rare Elegant Trogon, Painted Redstart and Whiskered Screech Owl found here.

Patagonia Sonoita Creek Preserve – Internationally known as a premier bird-watching destination, this site is owned and managed  by the Nature Conservancy. Nearly 300 species of birds have been sighted in the cottonwood/willow riparian forest. Don’t miss the roadside rest area on the way to Patagonia for what birders call “the best of the best.”

Kino Springs/Estancia Yerba – On the northern edge of Nogales these spring-fed ponds attract many water-loving birds such as the Black-bellied Whistling Duck in spite of the drought that has killed many of the large cottonwoods and willows in the area.

Buenos Aires National Wildlife Refuge – Just outside of Arivaca, this refuge was first established to provide habitat for the recovery of the nearly extinct Masked Bobcat. This wetland oasis is an example of the lush grasslands that once covered southeast Arizona.