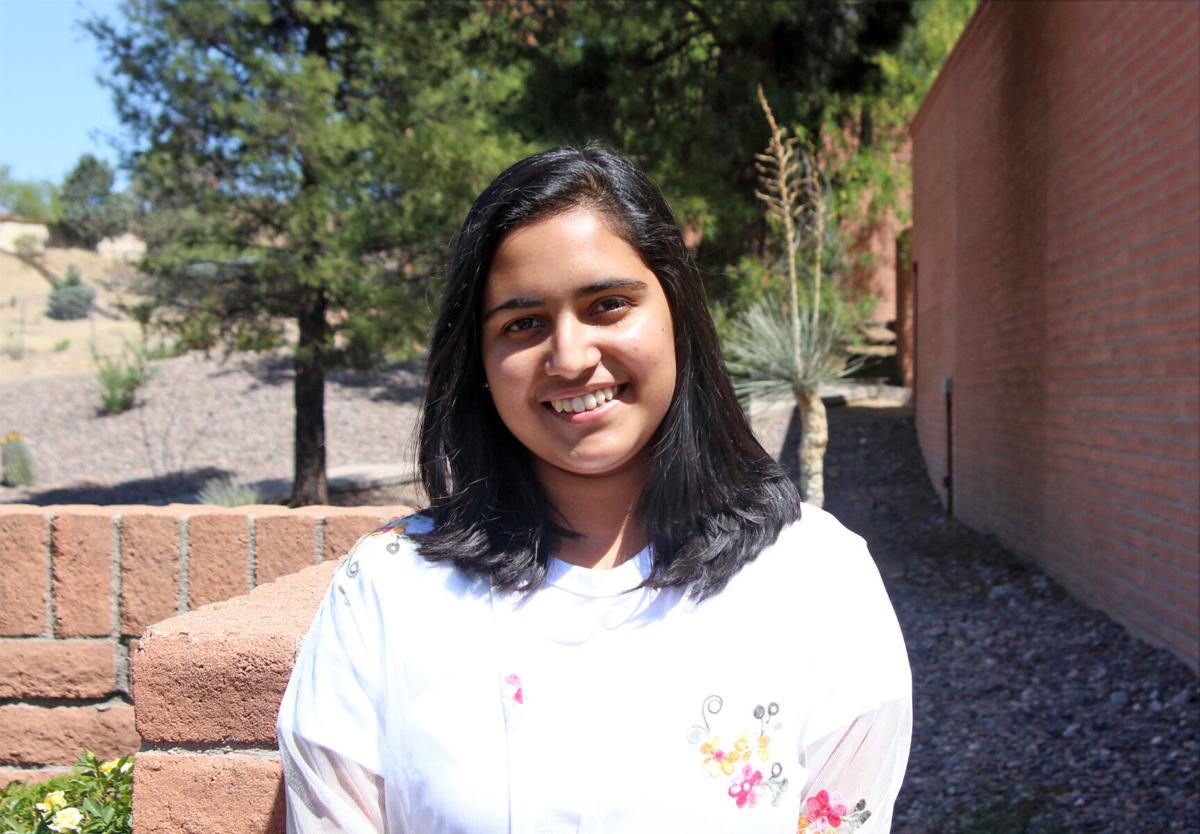 Srishti Mitra is the valedictorian of the Class of 2021 at Nogales High School. 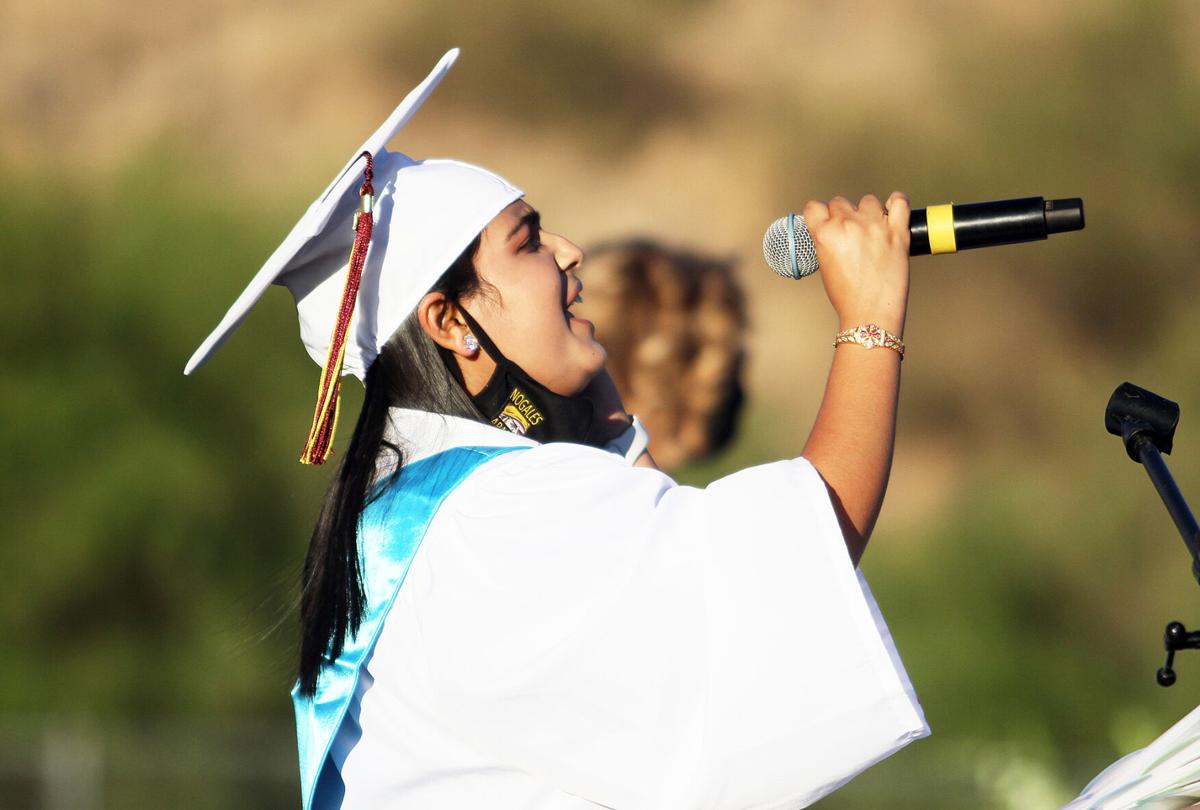 Srishti Mitra sings the national anthem at the start of the NHS Class of 2021 graduation ceremony on May 21.

As a musician, Srishti Mitra sang the national anthem at local ROTC events and her high school graduation ceremony, and also performed Indian classical music at cultural events in Tucson and Phoenix. As a writer, she’s won an award for an essay about Queen Laxmibai, a leader of India’s rebellion against British rule, and won a VFW contest with an essay on why voting matters. As a student, she’s at the top of Nogales High School’s Class of 2021 and headed for a career in medicine.

This year’s NHS valedictorian plans to study biomedical engineering in college and go to medical school, and hopes to one day work with the United Nations. But she said that doesn’t mean forgetting the town where she has grown up since she was 6 years old.

“I want to also carry the name of Nogales, because this community has given me so much and I want to give back to it,” Mitra said.

From a young age, Mitra has had her sights on becoming a professional scientist. In elementary school, she thought about a career in marine biology and later in volcanology. By the time she was in middle school, she’d settled on medicine.

In part, that interest is due to research she conducted over the course of several years. Mitra’s father is the former CEO of Lifespring hospitals, an Indian hospital chain that provides maternity care to low-income women. In regular visits to India and other South Asian countries, Mitra learned about the business, talking with doctors, nurses and hospital staff, and eventually wrote a research paper on what low-cost maternity care could look like in the future.

“When I saw the hospital atmosphere and everything, it made me want to pursue medicine,” she said. She’s particularly interested in gynecology and cardiology.

Mitra was born in Kalyani, in the state of West Bengal, but her family traces their roots to Kolkata, the state capital a few miles away. When she was 6, Mitra and her mother Dipanjana Mitra moved to Nogales, when her mom took a job as a math teacher at Nogales High School. Her father initially stayed in India, but later joined the family in Arizona when Mitra was in eighth grade.

In sophomore year, Mitra found herself in an unusual situation for a high schooler – she was a student in a trigonometry class taught by her mother. “It was very awkward in the beginning,” Mitra laughed, “but I got used to it.”

She credits several teachers for being particularly supportive on her academic journey.

She said Lupita Lillywhite, her fifth-grade teacher, was “one of the most wonderful people I’ve met.” A middle school teacher, Alison Smith, helped her think about math in new and fun ways.

In high school, Mitra said she was inspired by history teacher Luke Brannen, as well as her mom. “She’s just a teacher in every single way,” Mitra said.

During her freshman and sophomore years, Mitra participated in the Air Force Junior ROTC program at NHS. Though she’s not headed for the military, she said JROTC taught her some important lessons.

“I think being part of that program taught me the importance of discipline and integrity, honesty, sincerity,” she said.

And she wanted to give a shoutout to some of her ROTC instructors: Donald Belch, Ronald Thielke and Frederick Harvey.

Mitra said another inspirational figure for her and her family is Rabindranath Tagore, an Indian writer and artist who was a leading figure in Bengali culture in the 19th and 20th centuries, as well as being the country’s first Nobel laureate and an advocate for women’s rights. In addition to singing Carnatic classical music, Mitra sings Rabindra Sangeet – songs composed by Tagore.

“He is someone that we truly respect,” she said, adding that she sees him as a guru.

Switching to online learning for senior year of high school left Mitra feeling like something was missing, but she says the experience also helped her understand what she likes about learning in school, alongside a teacher and classmates.

“It’s not the same,” she said of remote learning. “I think I missed that atmosphere the most.”

Mitra found out that she was the top-ranked student in her class earlier in senior year, when she received her mid-year transcript, which noted her placement among her peers.

“I felt very very grateful and thankful, and a little proud, too,” she said. “It’s been a very long journey.”

Earlier this month, she finished up exams for her International Baccalaureate program. Next up is a summer program conducting lab research at Arizona State University. Then she’s planning to head to college in the fall. Mitra was admitted to both Harvard and ASU, but said on Thursday that she still hadn’t made a final decision about which school she will attend next year.

Nogales High School graduated its Class of 2021 during a ceremony at Apache Stadium on May 21.