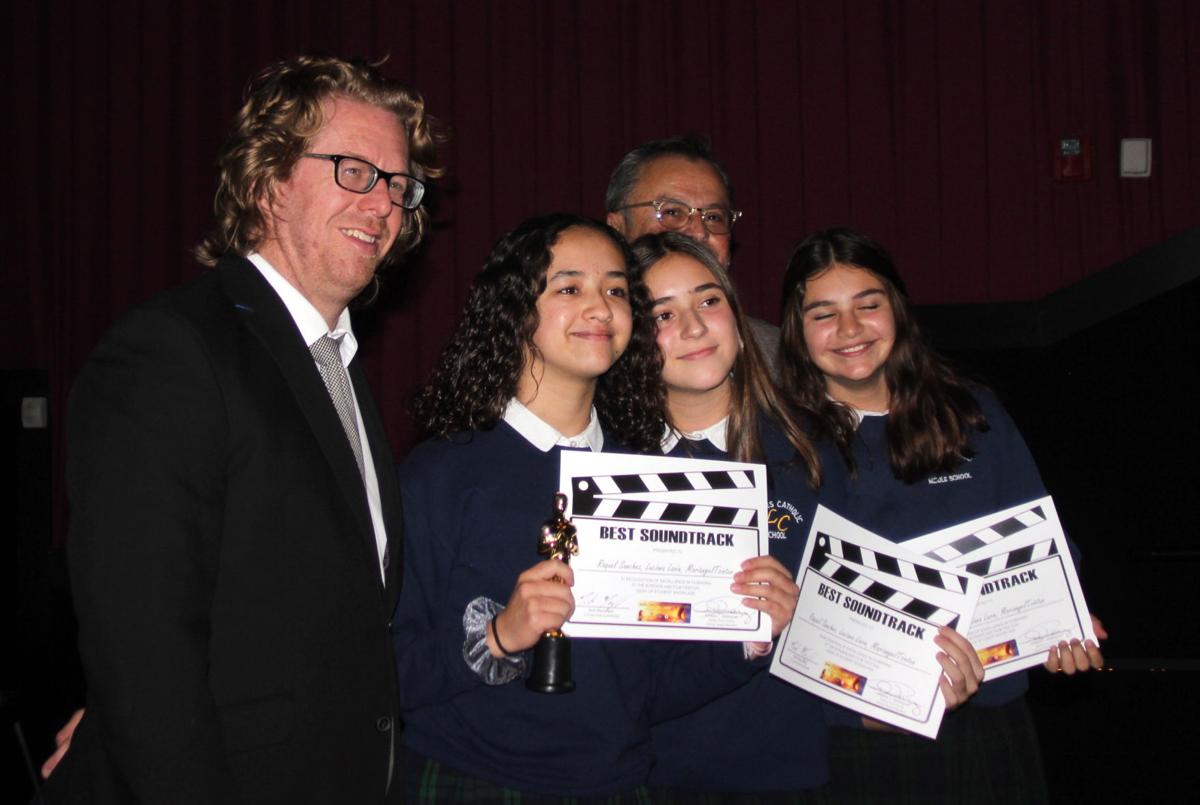 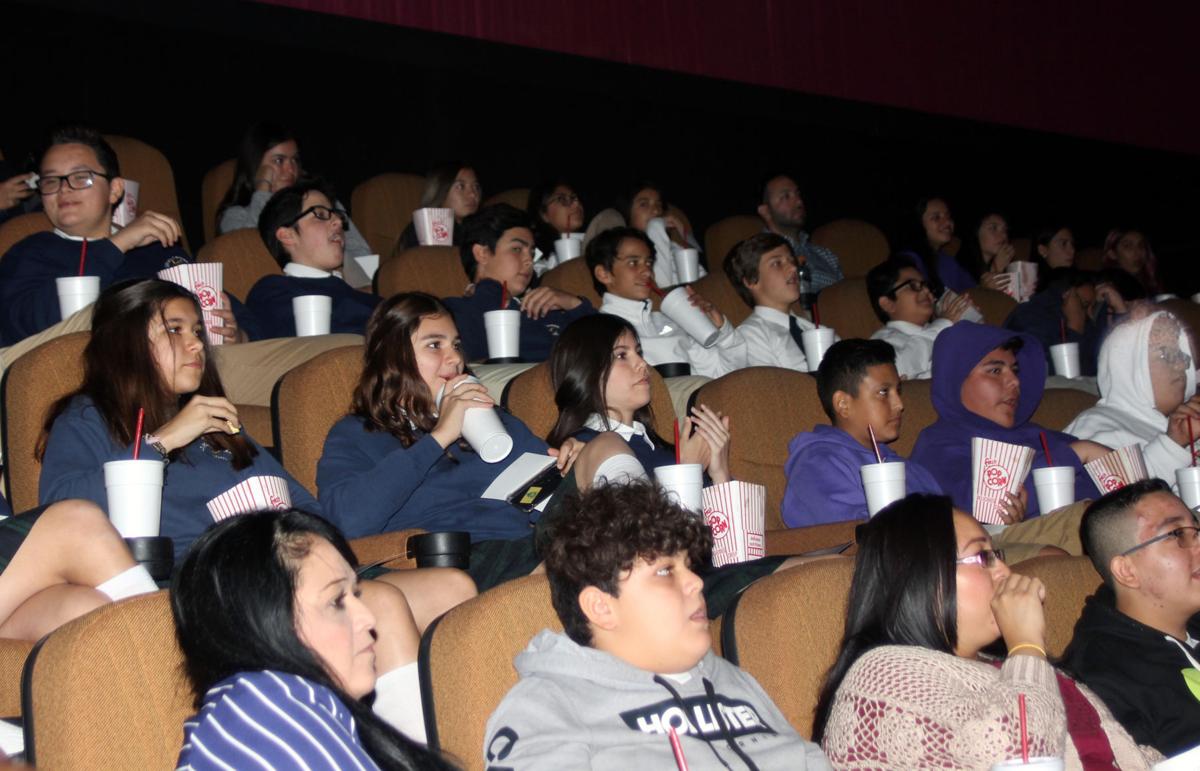 About 75 students, teachers and parents attended the Friday morning event. 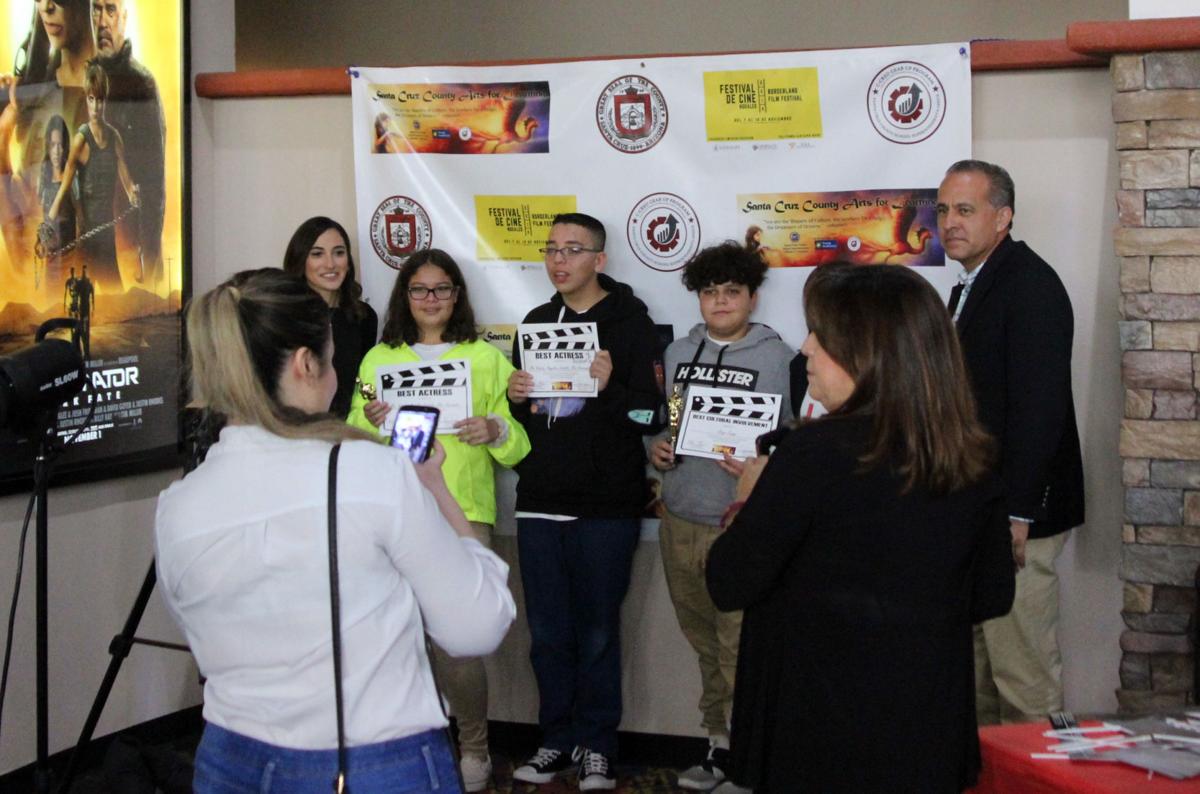 Student filmmakers pose for a photo at the Oasis Theater.

A boy walked along a dusty road beside the U.S.-Mexico border fence, talking about the good and the bad of living in a border town.

A Spanish guitar played in the background as the camera smoothly followed his steps.

After about a minute, the camera zoomed out and lifted up, above the border fence and the buildings, revealing an aerial drone shot of Ambos Nogales that framed the 10-story Fray Marcos Hotel and the hills of Nogales, Sonora.

The movie, created by Wade Carpenter Middle School student Diego Zuniga, was one of 15 short films screened last Friday morning at the Oasis Cinema in Nogales.

The roughly one-minute films were made by eighth-grade students from around Santa Cruz County and addressed the theme of “life on the border.”

“It’s about how we can have two cultures in one spot… different foods, cultures and traditions that we can share,” Zuniga said. “That wall doesn’t separate us from doing much.”

The goal was to give the students “an opportunity to voice their experiences, voice their perception, and to do so in a creative manner,” he said.

Some of the movies touched on lighter aspects of life in Nogales, highlighting the bilingual and bicultural nature of the community.

Another featured two boys trying to buy a piece of Mexican candy. After a moment of confusion, one of the boys translated between the Spanish-speaking shopkeeper and his English-speaking friend in order to explain the different options.

In another, an exasperated woman sat behind the wheel of a car, waiting in line to cross into the United States.

“We’ve been waiting here for an eternity!” she complained.

That drew laughs from the audience of about 75 students, teachers and parents.

Savannah Alvarez, who worked on her film with fellow Desert Shadows Middle School students Michelle Peña, Fernanda Pliega and Valeria Plaza, added clips of a speech by President Trump to their film.

She said the movie aimed to show the disparity between the president’s rhetoric about the border and the reality of her life in Nogales.

In his movie, Kemp talked about getting cheap movie tickets at the theater in Nogales, Sonora, but joked that it wasn’t such a big deal to him, since his parents were paying.

Kemp wasn’t on hand for Friday’s showing, so his mom picked up the award.

The Nov. 8 event was a part of the Borderland Film Festival, a four-day program that started last Thursday and included movie screenings in Nogales, Ariz. and Nogales, Sonora.

Mansfield said that he hopes the one-minute movie project inspired the kids to develop an interest in filmmaking and content creation.

He told the NI that he wanted to keep making movies.