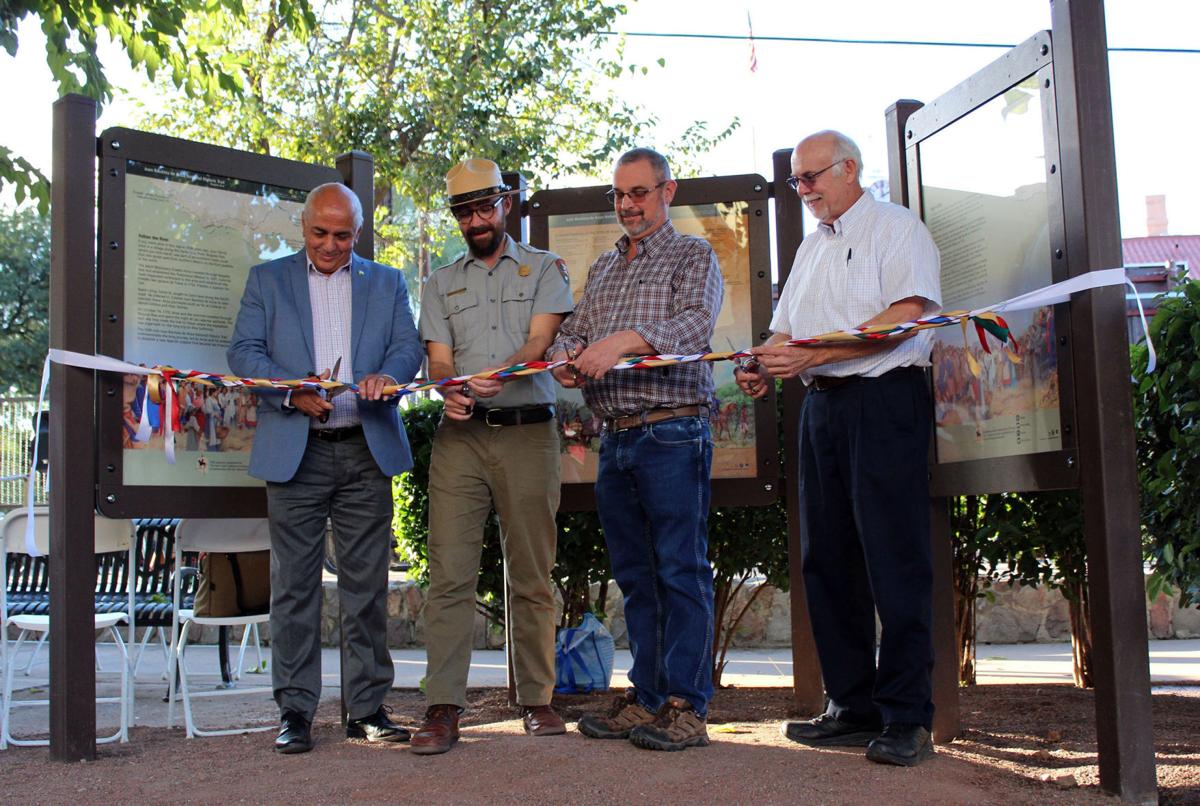 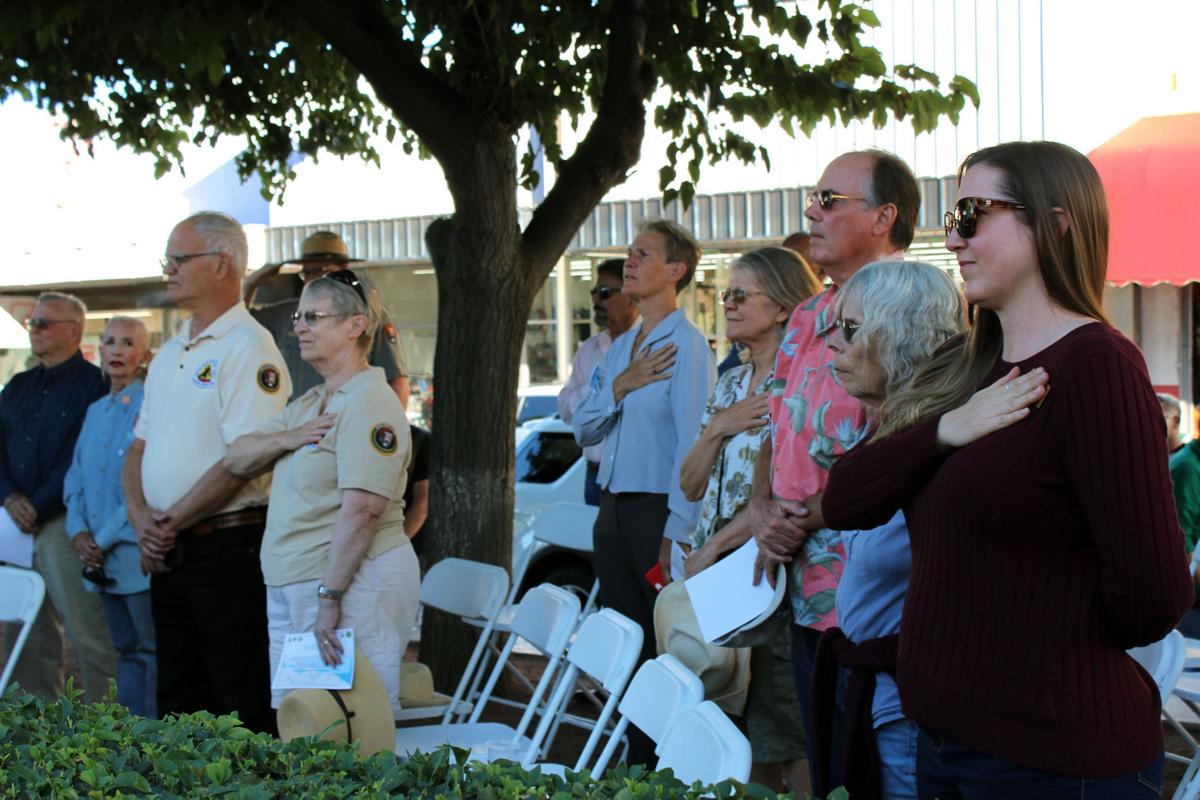 Guests at the ribbon-cutting ceremony stand for the pledge of allegiance. 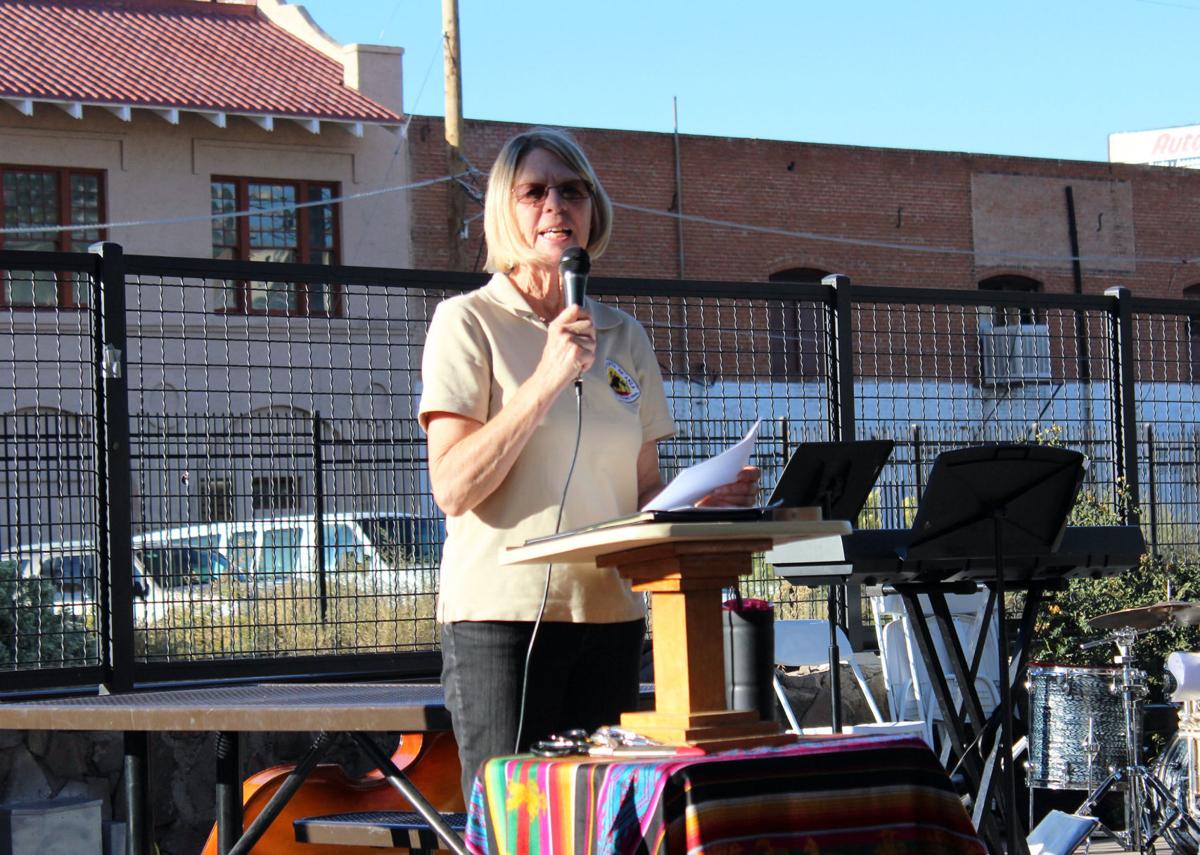 Connie Williams, member of the Anza Trail Coalition of Arizona, introduces the wayfinding project during the ribbon-cutting ceremony on Friday, Nov. 1.

Three large interpretive panels now stand tall near the center of Karam Park, each detailing a part of the history behind the Juan Bautista de Anza National Historic Trail, which extends from Nogales to San Francisco.

The panels, one of which includes a list of the families that took part in the 1775-1776 Anza expedition to establish a Spanish colony at San Francisco Bay in California, represent one part of a larger way-finding project by local and national entities meant to promote and preserve the local sections of the Anza Trail.

“What we’ve been doing for this project has been to get signs on the freeway exits and through town, and put interpretive panels – just things to help people find (the trail),” Connie Williams, secretary of the Anza Trail Coalition of Arizona, told the NI. “The piece that involves Nogales was just finished, and so that involved making this the Nogales trailhead.”

The trail coalition, along with the National Park Service, Santa Cruz County, City of Nogales and Arizona Department of Transportation, began the way-finding project in 2014 and held the ribbon-cutting ceremony last Friday afternoon to celebrate the near completion of the project in the Nogales area.

The larger project consists of setting up road signs on Interstate 19, the frontage roads between Amado and Nogales, and along city streets including Grand Avenue, Mariposa Road and Hohokam Drive, to make it easier for people to track down the trail. Other interpretive panels, like the one now at Karam Park, were set up throughout Tubac, and one more is to be installed at the 1904 Historic Courthouse.

Christopher Bentley, interpretive specialist with the National Park Service in San Francisco, emphasized that such projects serve to connect previous generations with the present and future ones.

“Now, on the trails, are cities like Nogales, like Tucson and all the way to San Francisco. But there are places where you can go and you can walk the trail, and you can imagine that you’re there,” Bentley said, about using one’s imagination to relive a moment of history. “This section that the way-finding project helped to sign is one of those places where you can really experience it and be transported, but also learn about your community.”

Bill Islas, dressed as Lt. Colonel Juan Bautista de Anza, provided a short summary of the expedition during the ceremony. He noted that Bautista de Anza traveled south to Culiacan, Sinaloa in Mexico, where he recruited soldiers and families to help with his mission.

“We, here, form a link with the future – with people not yet born who will visit Karam Park, sit under the shade of these big trees and read the story of the expedition,” Williams said during the ribbon-cutting ceremony. “We connect with these people to come, but we hope that they will connect to this place and the people, including us, who left their legacy.”

In addition to the urban section of the Anza Trail through Nogales, additional sections follow the Santa Cruz River north through the county and are popular with day-hikers. Trailheads are located near Exits 17 and 22 of Interstate 19 in Rio Rico, just north of Tumacácori National Historical Park and next to Tubac Presidio State Historic Park.