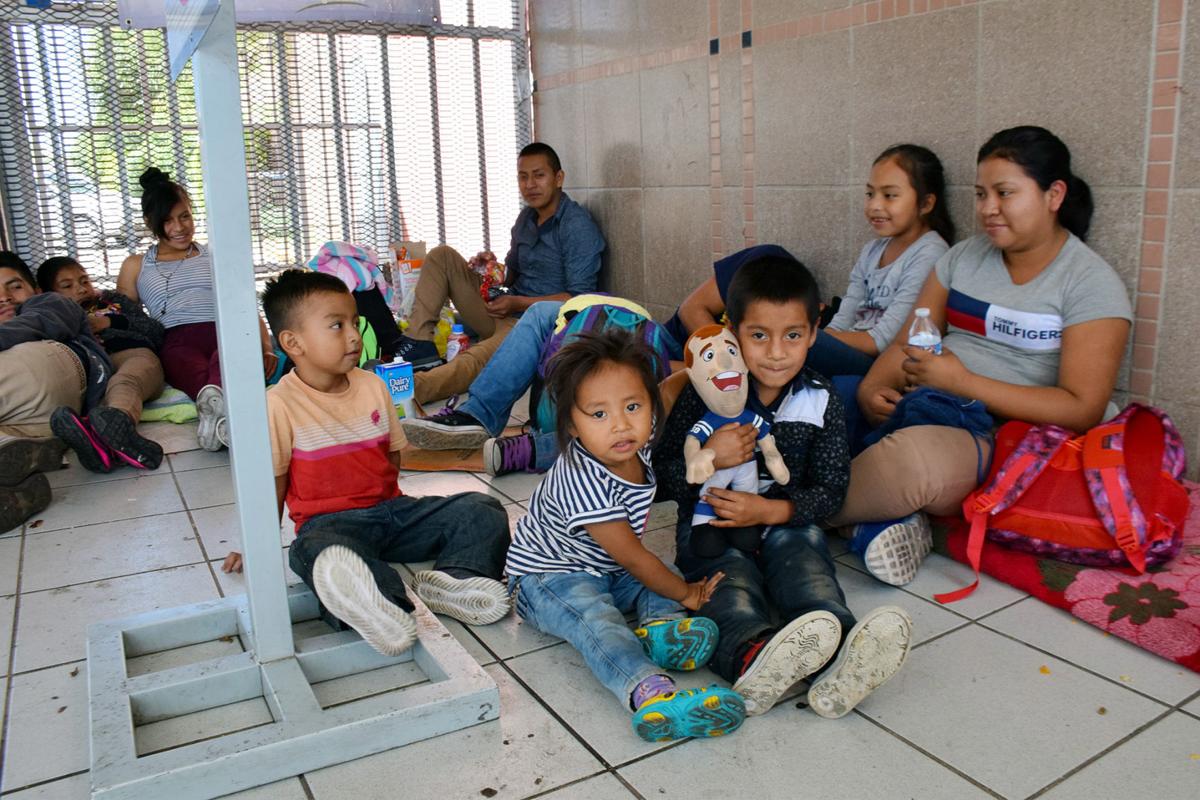 Guatemalan migrants wait in the hallway outside the Dennis DeConcini Port of Entry on Monday morning, where they arrived Saturday to ask for asylum in the United States. 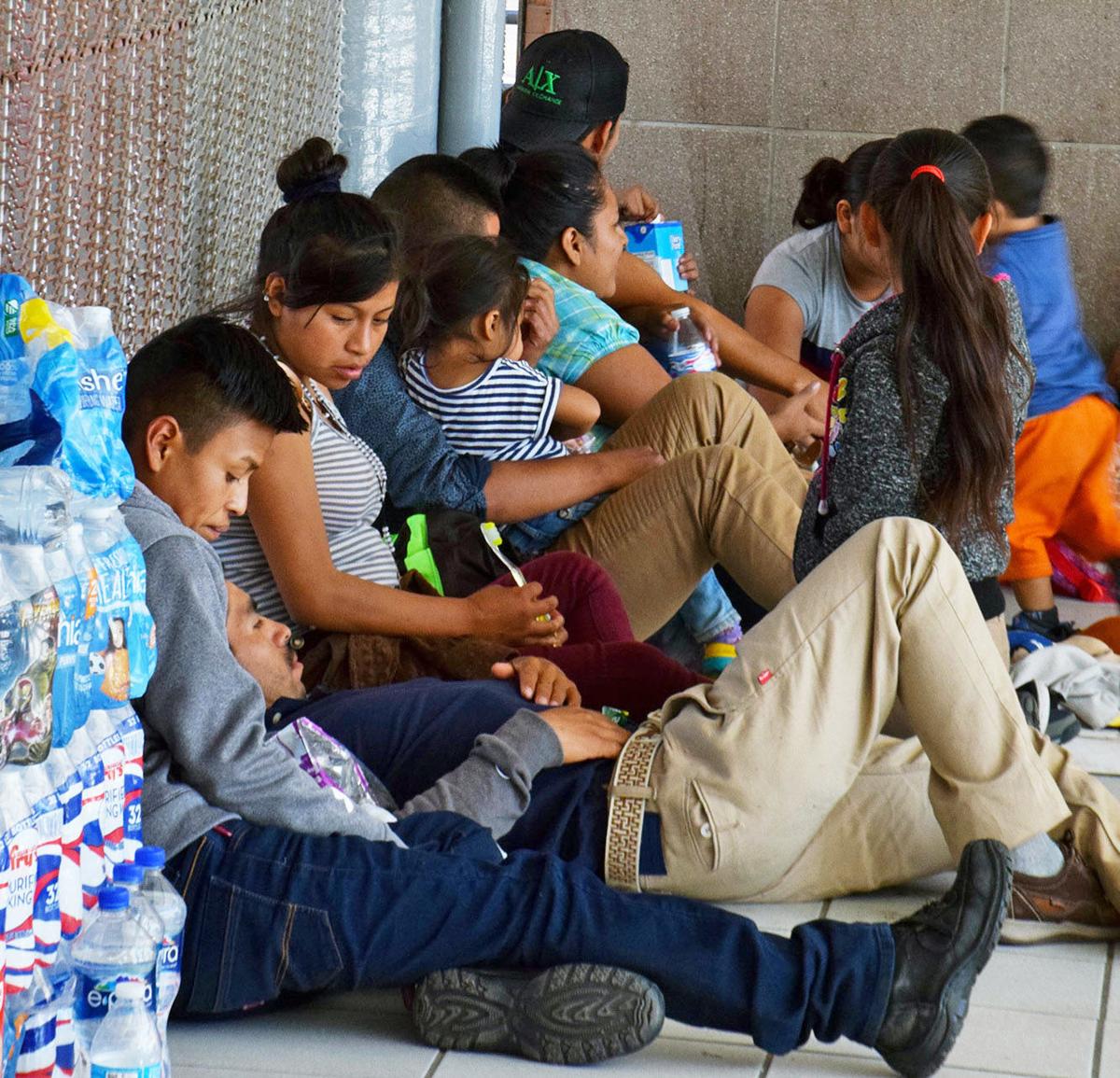 Guatemalan migrants sit in the tiled hallway south the Dennis DeConcini Port of Entry on Monday morning, waiting to ask for asylum in the United States. 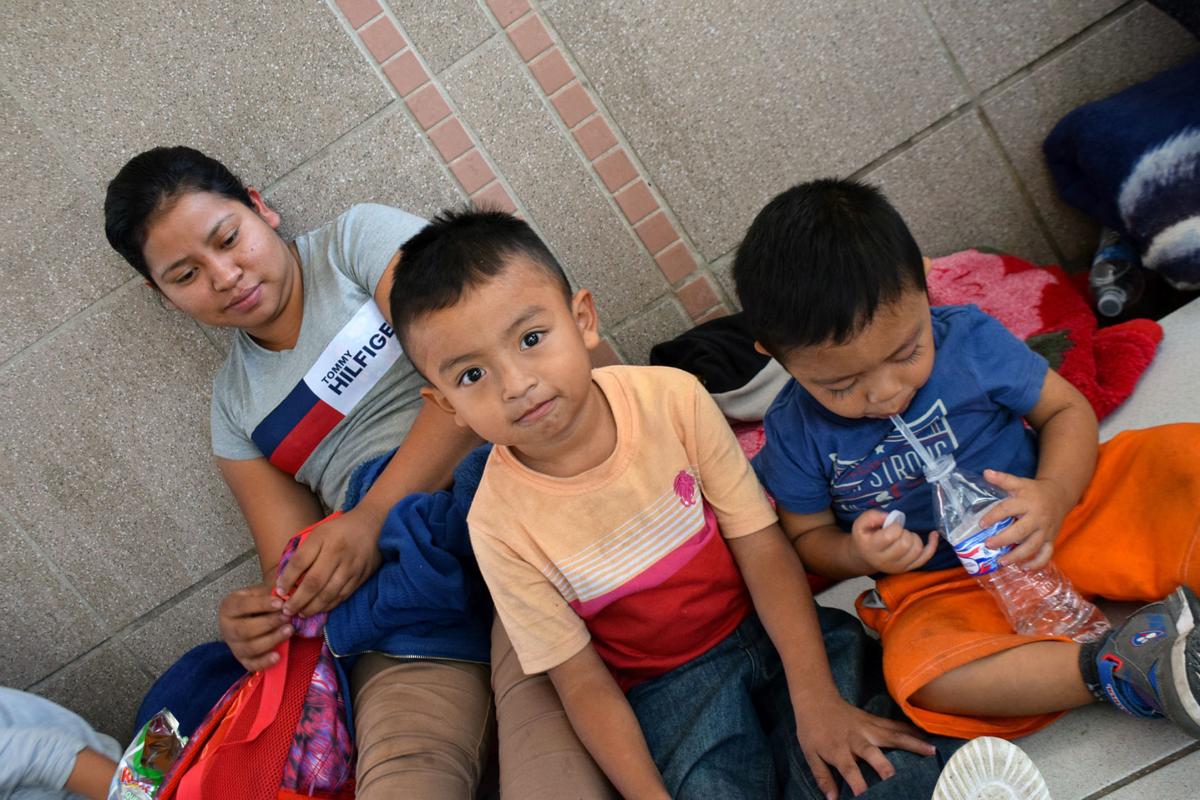 Mayo, 4, smiles as he sits with other families waiting outside the Dennis DeConcini Port of Entry in Nogales, Sonora for the third day Monday.

Guatemalan migrants wait in the hallway outside the Dennis DeConcini Port of Entry on Monday morning, where they arrived Saturday to ask for asylum in the United States.

Guatemalan migrants sit in the tiled hallway south the Dennis DeConcini Port of Entry on Monday morning, waiting to ask for asylum in the United States.

Mayo, 4, smiles as he sits with other families waiting outside the Dennis DeConcini Port of Entry in Nogales, Sonora for the third day Monday.

Sitting on grease-stained cardboard pizza boxes and folded blankets, many with young children resting in their arms, a group of Guatemalan migrants waited on the Sonoran side of the turnstiles at the Dennis DeConcini Port of Entry on Monday, hoping to ask for asylum in the Untied States.

The group, originally comprised of about 100 people, mostly women and children from Central America, arrived in Nogales, Sonora over the weekend. Those remaining Monday morning said U.S. authorities had been allowing a few at a time to cross and request asylum, but the slow pace had led about half their numbers to seek alternatives elsewhere.

The migrants said they were not part of the now-famous caravan that attracted President Donald Trump’s attention and ire last month as it headed north through Mexico. Instead, they left Guatemala on their own, some operating under a belief that the United States was granting mothers with children asylum until the end of May.

“At the embassy in Guatemala, they said mothers and children can get refuge in the United States, but it’s going to end in May,” said Rosa Hernandez, 23, who was traveling with her 2-year-old son Estuardo.

However, the mothers and fathers camped out in Nogales, Sonora with hopes of escaping poverty and violence at home are waiting to enter the United States at a time when the Trump administration is expressing little sympathy for the plight of migrant families. A week ago Monday, Attorney General Jeff Sessions delivered speeches in San Diego, Calif. and Scottsdale, Ariz. calling for a “zero tolerance” policy that would see all undocumented immigrants prosecuted in federal court, and vowing that parents “smuggling a child” would be separated from their children.

“If you don’t like that, then don’t smuggle children over the border,” he said in Scottsdale.

He also warned that filing a “fraudulent asylum claim” would be considered a felony.

Sessions has pointed to an increase in the number of border-crossers apprehended by the U.S. Border Patrol in recent months, up 200 percent from this time last year, as the reason for pushing harsher deterrence measures. However, the number of apprehensions is still lower than it was in Fiscal Years 2013 and 2014, and similar to apprehensions in summer 2016.

Asked Monday how Sessions’ policy applies to people seeking asylum at ports of entry, U.S. Customs and Border Protection provided a statement from Homeland Security Press Secretary Tyler Q. Houlton saying that his department “does not currently have a policy of separating families at the border for deterrence purposes.” However, the statement continued, children are sometimes taken from adults if officers cannot determine a “parental relationship or if we think the child is otherwise in danger.”

CBP did not respond directly to questions about the status of asylum-seeking migrants who had been admitted at the Nogales port in recent days.

Estela Arias, 47, who reached the U.S. border after traveling for more than two weeks from her home in central Guatemala with her two youngest sons – ages 7 and 16 – said she hadn’t heard anything about children possibly being taken from parents crossing the border. Breaking down in tears, Arias said she had already left her 18-year-old son behind at home because he didn’t think he would qualify for asylum like his younger brothers.

“They won’t let older kids pass,” she sobbed. “It’s breaking my heart to leave him. I don’t know what will happen to him.”

Arias’ son Oscar Ronaldo, 7, sat quietly by her side, fishing marshmallows out of an almost empty bag of Lucky Charms, smiling shyly as he held up a blue-and-white, moon-shaped marshmallow for his mom to see.

“I want to do the best for my kids. I want them to study, because I don’t even have enough to feed them,” Arias said.

She was one of about two dozen people still waiting in Nogales, Sonora around noon Monday. Of the nearly 100 people who had arrived Saturday morning, she said probably 15-20 people had been admitted into the United States, with about five people being allowed through the metal turnstile by CBP officers every four hours Monday.

During the weekend, almost no one had been permitted to pass, Hernandez added, and at least 50 people had left early Monday morning either to ask for refuge at another port of entry or to cross through the desert, discouraged by the long wait.

“I didn’t want to do that because of my son,” she said of crossing the desert. Though the children waiting outside the port of entry were hungry, dirty and cold, she said, at least they wouldn’t be victim to wild animals or get lost in the wilderness.

“The hardest part of all of this has been seeing your child suffer,” she said. “Adults, we can get through it, but the kids don’t understand.”

‘All I have left’

Most of the women and men who leaned against the metal mesh that lines the entrance, their children napping or playing with dirt-stained toys nearby, said they left Guatemala because it was impossible to raise children in such desperate poverty.

Arias and Juan Mas, 42, who was attempting to cross the border with his 16-year-old son, said they had lived off subsistence agriculture in Guatemala, but couldn’t make enough money to feed their families anymore.

“People have started robbing, assaulting because there is no work, there’s no money,” Arias said. “We’ve come out of necessity. If we didn’t have to, why would we leave our little homes behind?”

Mas said he had decided to leave Guatemala after his son was the target of violence. They came, he said, even though he was afraid to travel to the United States because he speaks the Quiché indigenous language and doesn’t know much Spanish or any English.

“But there’s no work, there’s no security,” he said in Spanish, speaking slowly and deliberately. “I had to leave to protect my son.”

Armando Ramirez, 21, who was traveling with his 2-year-old daughter, said he left his wife and 2-month-old son at home in order to travel to the United States, hoping it would mean he could give his children a better life.

“Things are bad in Guatemala. This is for my children, for their future,” he said, wiping tears from his eyes as he described the 25-day journey he made with his small daughter in tow.

As he spoke, a CBP officer came to the turnstile, saying that five people would be allowed through. Everyone jumped to their feet, grabbed their children and rushed forward.

As a handful of people passed the gates and everyone else moved back to their places in line, Hernandez, the woman traveling with her 2-year-old son Estuardo, said the journey had been difficult and dangerous, but she felt confident that after everything they had been through, she and her son would be able to make a new life in the United States.

“I have faith that we’ll make it. Thank God we’re alive. And if God hasn’t allowed us to die after all we’ve been through, it’s because there’s something waiting for us,” she said. “Right now I have to fight for my baby and do everything for him because he’s all I have left.”

Collection: Asylum-seekers at the border

Families continue to arrive at port in hopes of asylum

Sonoran media reported an uptick Thursday in the number of migrants camped out south of the Dennis DeConcini Port of Entry, waiting to ask for…