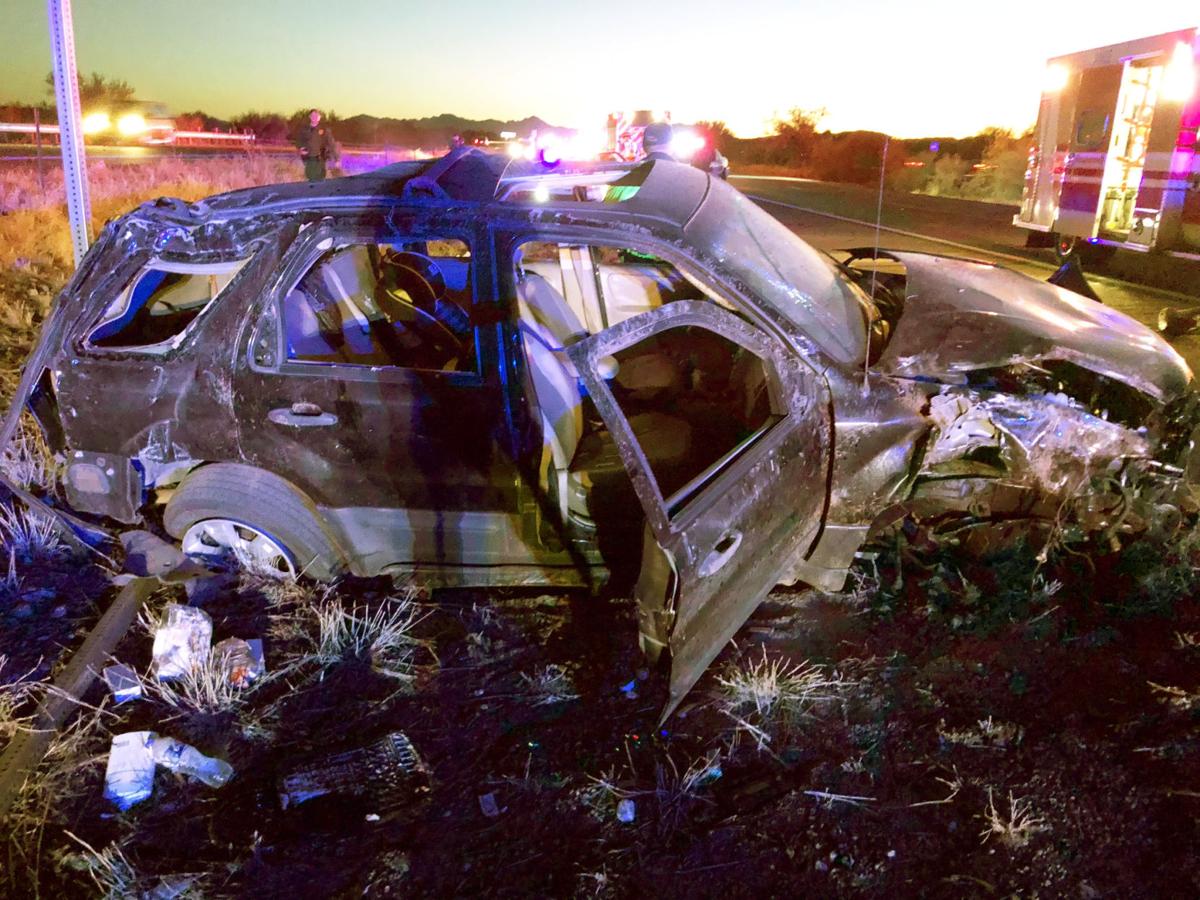 The Ford Escape wrecked near Kilometer 56 on Interstate 19 in Green Valley. 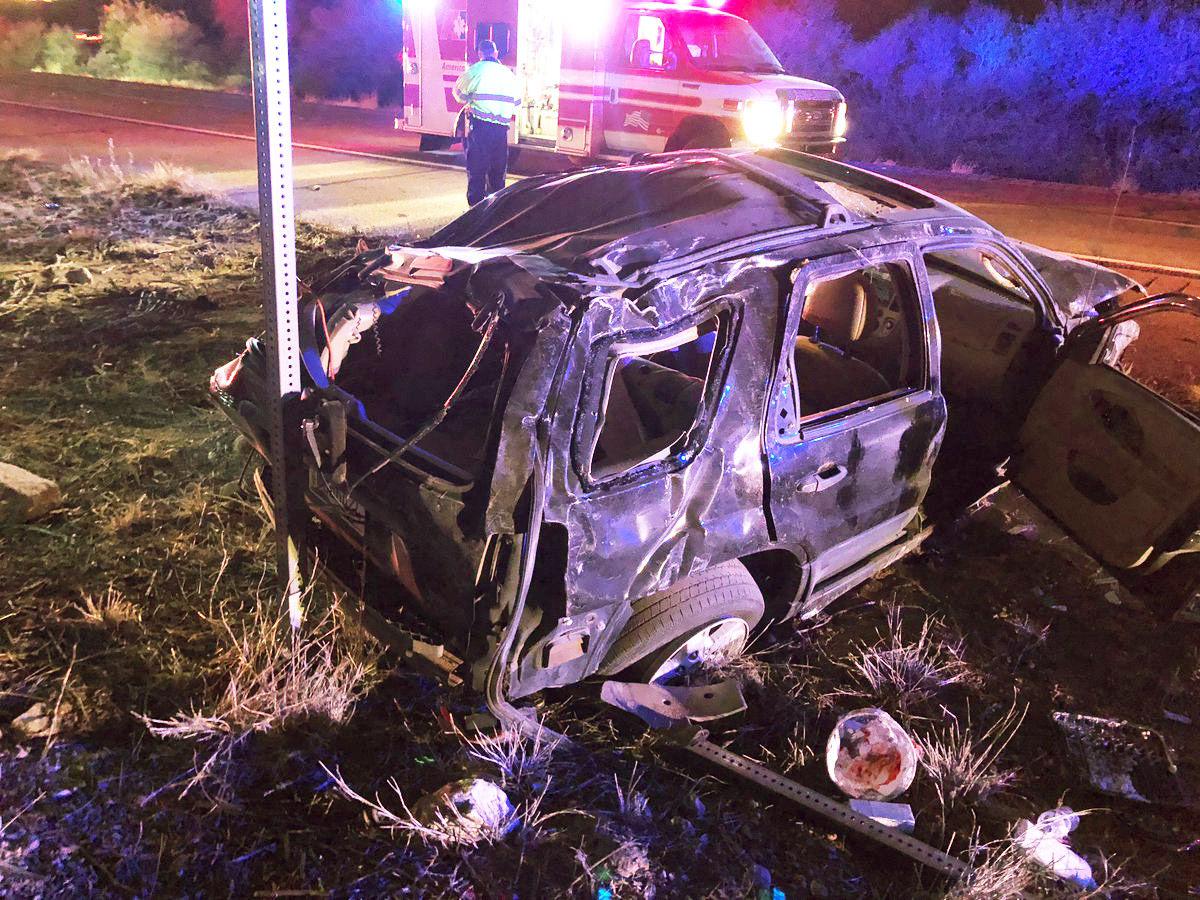 The Ford Escape driven by Roberto Ramirez wrecked near Kilometer 56 on Interstate 19 in Green Valley.

The Ford Escape wrecked near Kilometer 56 on Interstate 19 in Green Valley.

The Ford Escape driven by Roberto Ramirez wrecked near Kilometer 56 on Interstate 19 in Green Valley.

A Tucson man is accused of fleeing the Interstate 19 checkpoint on Christmas Eve with two undocumented immigrants in his SUV, then firing at Border Patrol agents before wrecking the vehicle.

According to a criminal complaint filed at U.S. District Court in Tucson, the incident began when a 2005 black Ford Escape with Arizona license plates approached the checkpoint on Dec. 24.

A Border Patrol agent conducting vehicle inspections “noticed the driver's hands were shaking tremendously as he was holding a cigarette,” the complaint says. The driver, later identified as 21-year-old Roberto Ramirez, also avoided making eye contact with the agent while his two passengers, later identified as German Vasquez Luna and Eduardo Villegas Ocochota, looked straight ahead.

After Ramirez said he was going to Tucson and identified the passengers as his friends, the agent asked the rear passenger, Villegas, if he was a U.S. citizen. Ramirez reportedly interrupted and answered for him.

Ramirez handed the agent his Arizona driver's license, and the agent referred him to the secondary area for further inspection, holding onto the license. Ramirez reportedly stopped briefly, then “accelerated abruptly through the secondary inspection area and back onto Interstate 19 at a high rate of speed,” the complaint says.

“Ramirez was driving erratically and continued at high rates of speed,” the document says.

One of the agents then pulled up alongside the Escape and reportedly saw Ramirez holding a gun and pointing it in his direction.

“(The agent) abruptly hit the brakes and saw Ramirez shoot in his direction multiple times,” the complaint says.

The second agent also pulled up next to the Escape and his passenger, a fellow agent, reportedly saw Ramirez fire the gun multiple times in their direction.

“Shortly thereafter, agents saw the Ford Escape jerk suddenly and flipped multiple times on the east side shoulder of Interstate 19,” the complaint says.

In a news release, the Border Patrol said the crash occurred near Kilometer 56, at the southern end of Green Valley.

Villegas was ejected from the vehicle and landed approximately 20 yards from where it came to rest, suffering “serious bodily injuries to include a broken collarbone and shoulder,” according to the complaint.

He, Ramirez and Vasquez were all arrested and transported to a local hospital for treatment of their injuries, the Border Patrol said in its news release.

Agents recovered the firearm at the crash scene and later identified it as a .38 caliber Charter Arms Bulldog revolver that had been reported stolen by Tucson Police Department. They also found multiple rounds of .38-caliber ammunition on Ramirez, according to the complaint.

During an interview subsequent to the crash, Vasquez reportedly told investigators that as he fled the checkpoint, Ramirez said, "This time they are not going to catch me.”

Vasquez said Ramirez drove erratically at a high rate of speed and kept slamming on his brakes in an attempt to block the pursuing Border Patrol agents.

Ramirez took out a pistol and fired one shot out the window in the air, then three or four shots toward a pursuing Border Patrol vehicle, Vasquez said, adding that Ramirez was attempting to reload the pistol when he lost control of the vehicle and crashed.

Villegas, the other passenger, also told investigators that Ramirez was trying to reload the gun when he crashed. He said he and Vasquez had been telling Ramirez to stop.

Both passengers said they had arranged in Mexico to be smuggled into the United States and transported to Kalamazoo, Mich., where they planned to work. Vasquez said he had agreed to pay $7,000 for the trip; Villegas said he had made a down payment of 15,000 Mexican pesos ($860) and owed another approximately 143,000 pesos ($7,250).

Villegas said he crossed the border illegally earlier in the day on Dec. 24, was picked up by someone driving a pickup, and eventually transferred to the Ford Escape. Vasquez said he had been picked up by the Ford Escape earlier that day somewhere near Nogales, Ariz., and had never met the driver, Ramirez, before then.

Ramirez reportedly waived his Miranda rights and initially claimed that the front seat passenger, Vasquez, gave him the gun and told him to shoot at Border Patrol agents. However, he later said he took the gun from under the seat and fired five times out the window. He allegedly told investigators he had bought the gun two days earlier to kill his father.

At one point, he said he got paid $500 for each undocumented immigrant he transported to Phoenix, but also claimed he was working off a debt his father owed to a cartel.

And while the passengers said he crashed while trying to reload his gun, Ramirez claimed he lost control after the vehicle was bumped.

In the initial complaint, Ramirez was charged with 10 criminal counts, including transportation of illegal aliens resulting in serious bodily injury, high-speed flight from a Border Patrol checkpoint, assault on a federal officer and use of a firearm in furtherance of a violent crime. On Wednesday, a federal judge ordered him held without bond.

The judge also signed an affidavit from the lead federal investigator in the case requesting that Vasquez and Villegas be held as material witnesses in the case against Ramirez. The Border Patrol said in its news release that the two would be processed for immigration violations.