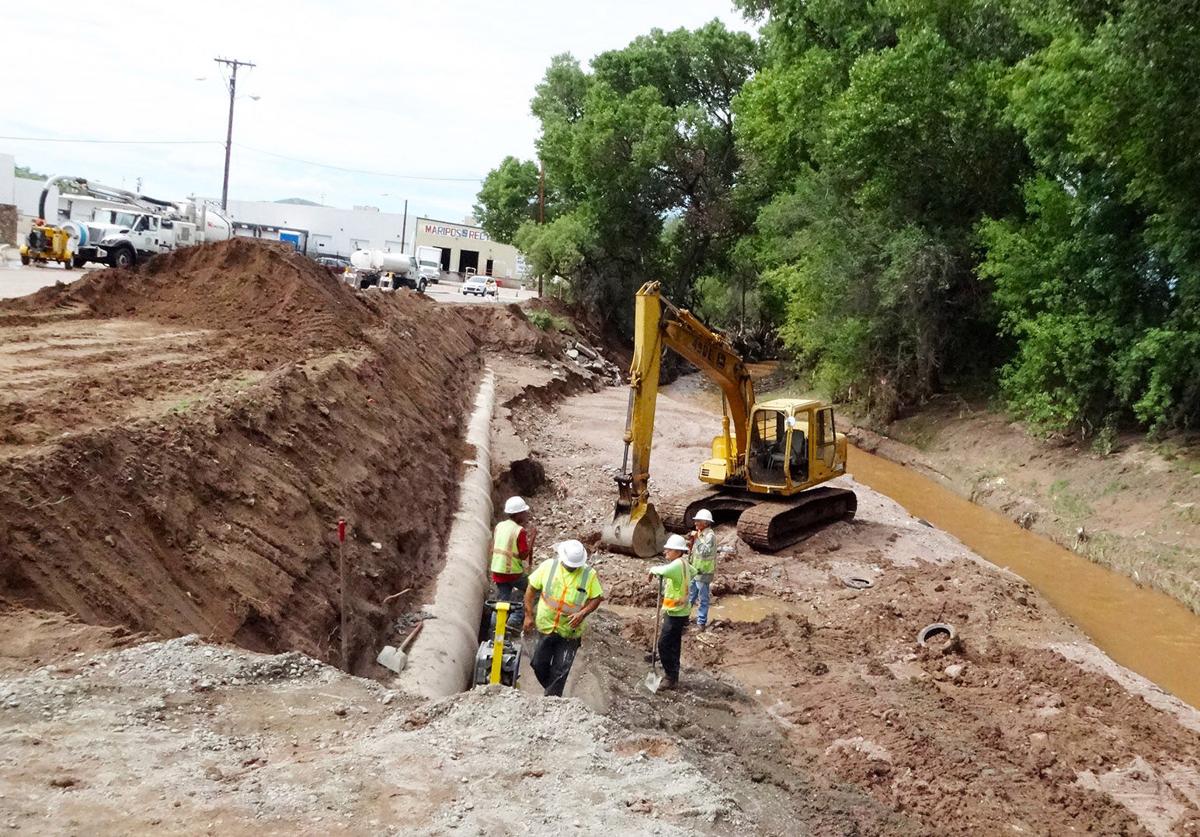 In Nogales, the aging IOI sewer line runs under and along the Nogales Wash, including this section near Hohokam Drive that became exposed during heavy rains in July 2017. The part of the line seen here is set to be repaired under a contract awarded this week. 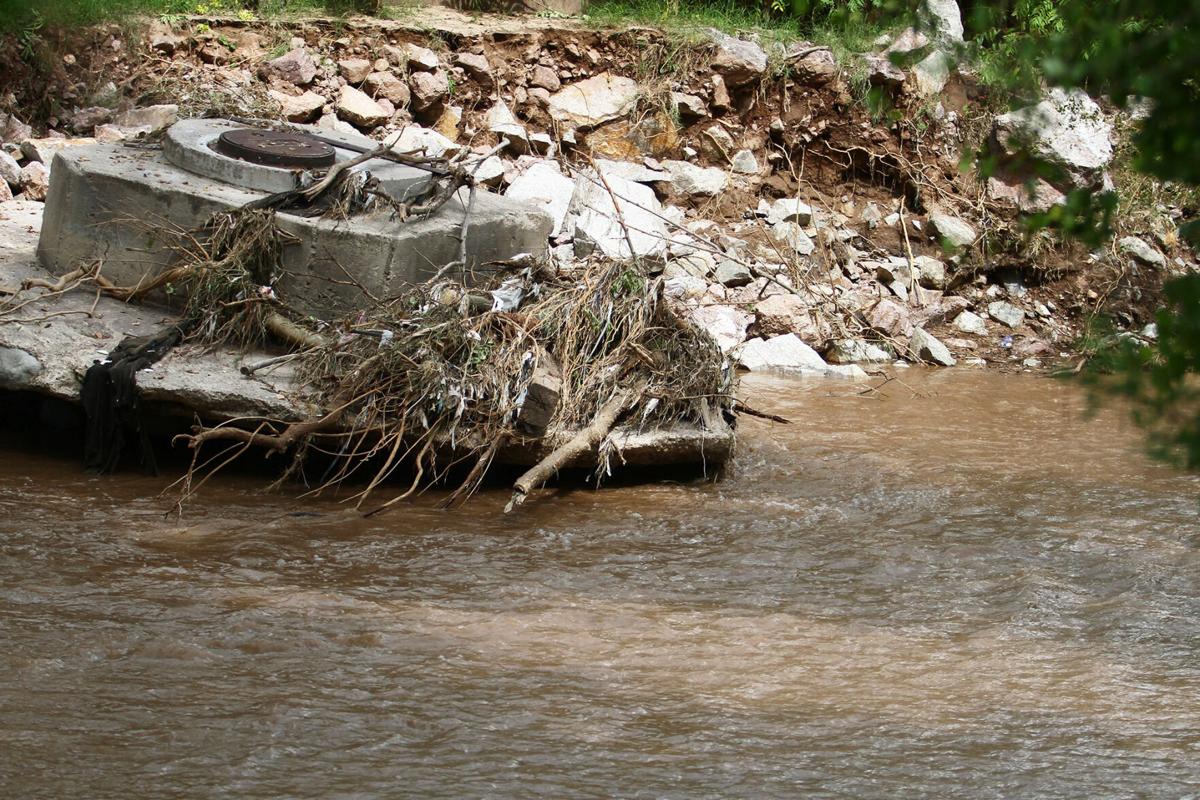 Th collapsing Manhole 89 of the International Outfal Interceptor sewer line is seen here in late July 2017, when a break at the site sent untreated sewage pouring into Potrero Creek directly east of the U.S. Forest Service building near Exit 12. 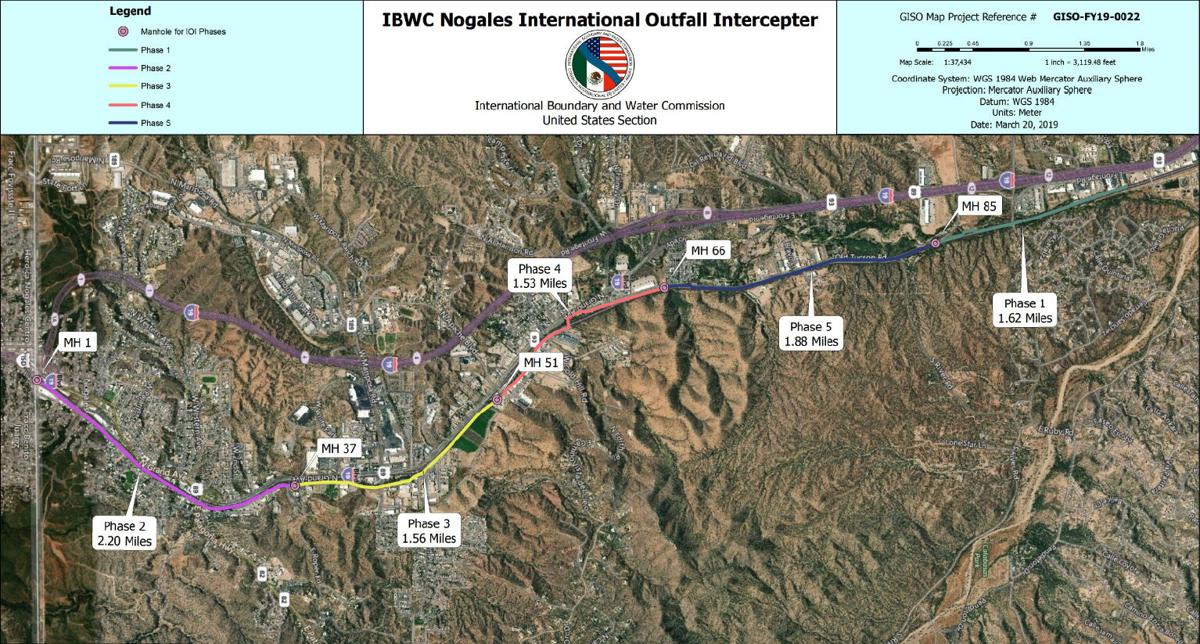 This east-west oriented map shows the path of the IOI sewer line, from the U.S.-Mexico border (left) to the treatment plant in Rio Rico (right), along with the five repair phases.

The U.S. International Boundary and Water Commission has awarded a contract for the repair of more than 5 miles of the crumbling pipeline that transports sewage from the U.S.-Mexico border in Nogales to a treatment plant in Rio Rico.

The $13.8-million contract was awarded Tuesday to Missouri-based SAK Construction, the USIBWC said in a news release.

The rehabilitation of the pipeline known as the International Outfall Interceptor (IOI) was divided into five phases, and the work now under contract includes Phases 1, 2 and 3, which together comprise 5.3 miles of pipeline and 56 manholes.

• Phase 1 includes the 1.6 miles of the IOI nearest to the Nogales International Wastewater Treatment Plant in Rio Rico. This section includes the most deteriorated part of the pipeline, the USIBWC said.

• Phase 2 covers the first 2.1 miles of the IOI, from the U.S.-Mexico border north through downtown and central Nogales.

• Phase 3 starts at the terminus of Phase 2 and extends another 1.6 miles north, to an area near West Produce Row at the north end of the city.

SAK Construction will fix the IOI using cured-in-place-pipe (CIPP) technology, in which a liner is inserted in the existing pipeline, then cured to form a solid pipeline inside the old one, the USIBWC said.

“Because this technology doesn’t require excavation of the pipeline, construction will cause less traffic disruption,” the commission said in the news release.

But Nogales Mayor Arturo Garino said the current plans don’t go far enough, calling it a “band-aid” solution. Garino said that hard objects like rocks get into the pipe in Nogales, Sonora and would likely cause damage to the pipe liner.

“It’s good to see that they’re putting the slip-liner… but it’s not a cure-all,” the mayor said.

He added that a better long-term solution would be to replace the pipe with a new line running under Morley Avenue.

SAK’s contract also calls for protective measures for the upgraded IOI in key locations vulnerable to damage from stormwater and debris, the release said.

Phases 1-3 are expected to be completed in 2023, and while there’s no firm start date yet, USIBWC public affairs officer Lori Kuczmanski said the hope is that work will begin by the end of the year.

“This is a critical project, and we’re excited for the work to begin,” Acting USIBWC Commissioner Daniel Avila said. “The pipeline has reached its useful life and, once it’s rehabilitated, this critical infrastructure will be able to continue serving the community.”

Phases 4 and 5 of the rehab plan involve approximately 3.4 miles of pipeline and 34 manholes between West Produce Way in Nogales and an area just north of the intersection of Old Tucson and South River roads. In its news release, the USIBWC said it expects to award a contract for the final two phases in 2022, “subject to the availability of appropriations.”

In 2020, the USIBWC settled a lawsuit brought against it by the Arizona Department of Environmental Quality that alleged Clean Water Act violations resulting from the leak-prone sewer line. A joint statement at the time from ADEQ and the USIBWC said the settlement called for $38.8 million in upgrades and protective measures for the IOI, and that the USIBWC had identified $34.2 million of existing funds to immediately begin the upgrades.

Asked about the statement that the contract for Phases 4 and 5 is subject to the availability of appropriations, given the post-settlement statement about available funding, Kuczmanski said the USIBWC is prohibited by law from authorizing an expenditure if it exceeds what’s already been appropriated. “We are confident we will be able to move forward with the project next fiscal year,” she said.

In its news release this week, the USIBWC said the IOI repair “is being undertaken with funding participation from the USIBWC, and supplemental funds from the Mexican Section of the International Boundary and Water Commission, the State of Arizona and Freeport McMoRan Foundation.”

The 50-year-old IOI carries sewage from both sides of Ambos Nogales to the treatment plant via reinforced and unreinforced concrete pipe that ranges in size between 24 inches and 42 inches in diameter, according to the USIBWC. Much of the pipeline lies underneath the Nogales Wash and Potrero Creek.

In one recent example of the hazards caused by the deteriorating IOI, the pipeline ruptured just north of city limits in July 2017 when one of its manholes collapsed after a powerful rainstorm. The line break sent untreated waste pouring into Potrero Creek and triggered an emergency declaration from Gov. Doug Ducey after elevated levels of the E.Coli bacteria were found in the water.

Manhole 89, where the break occurred, is part of Phase 1 of the repairs, for which the contract was awarded this week.

“The current state of the IOI is a public health nightmare for the people of Santa Cruz County who live under the threat of water contamination when the IOI overflows,” U.S. Rep. Grijalva said in a statement in response to this week’s contract award. “I have fought for years to clarify responsibility of the IOI and secure federal funding for the needed repairs to keep my constituents safe. While this took entirely too long to come about, I’m pleased to see the needed repairs finally moving forward and hope the rest of the funding allocated to the IBWC for repairs is quickly dispersed.”

With much-needed repairs on the way, another crucial issue still remains: responsibility for its upkeep.

Maintenance of the pipeline is the shared responsibility of the City of Nogales and the USIBWC as the result of a deal struck back in 1953. In recent years, the city has balked at its 23-percent share, saying Nogales contributes only about 8 percent of the sewage treated in Rio Rico, with the rest coming from Nogales, Sonora. And it has fought the USIBWC in court over the issue.