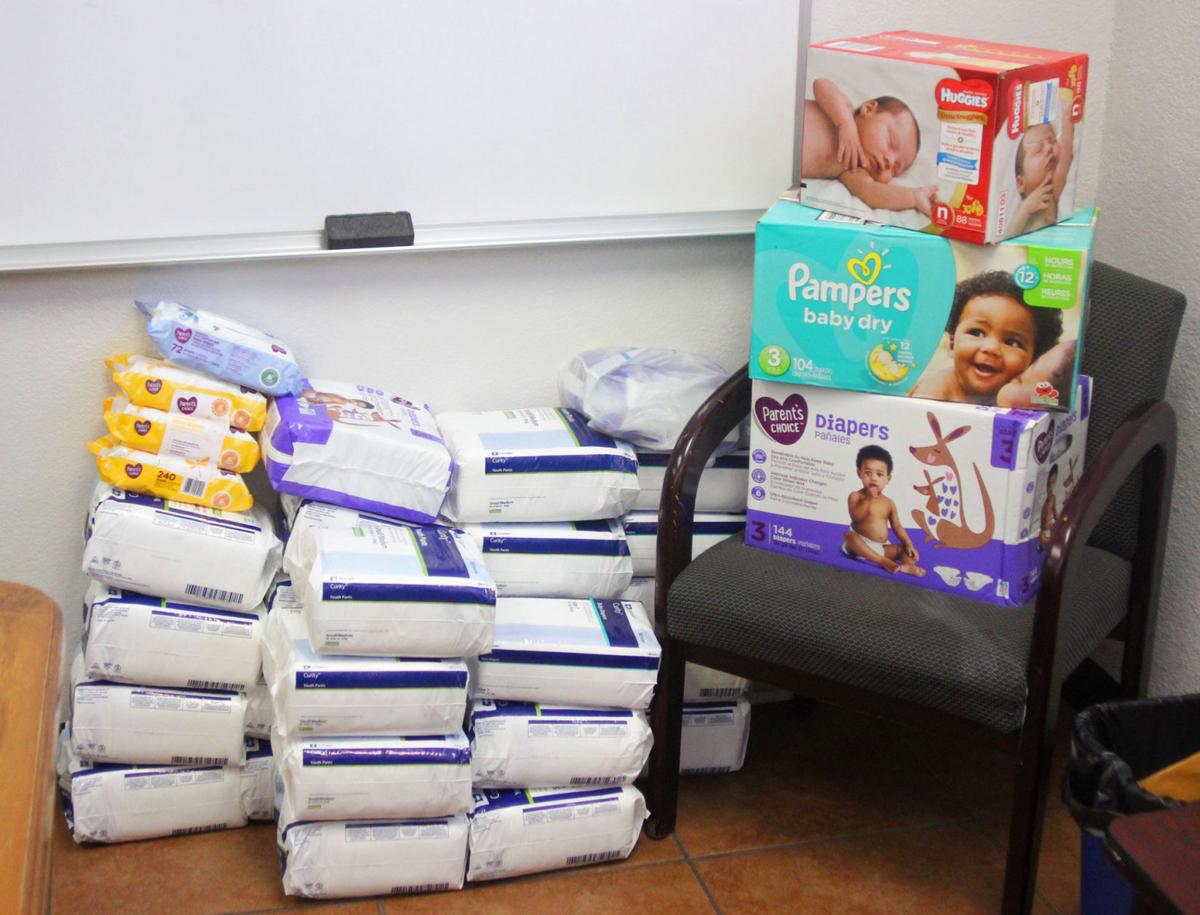 Community members donated these diapers and baby wipes at the Nogales Fire Department Station No. 1 after a community member organized a diaper drive for Alyssa Cordova, the wife of slain Nogales Police Officer Jesus Cordova. Alyssa Cordova has three children and one on the way. 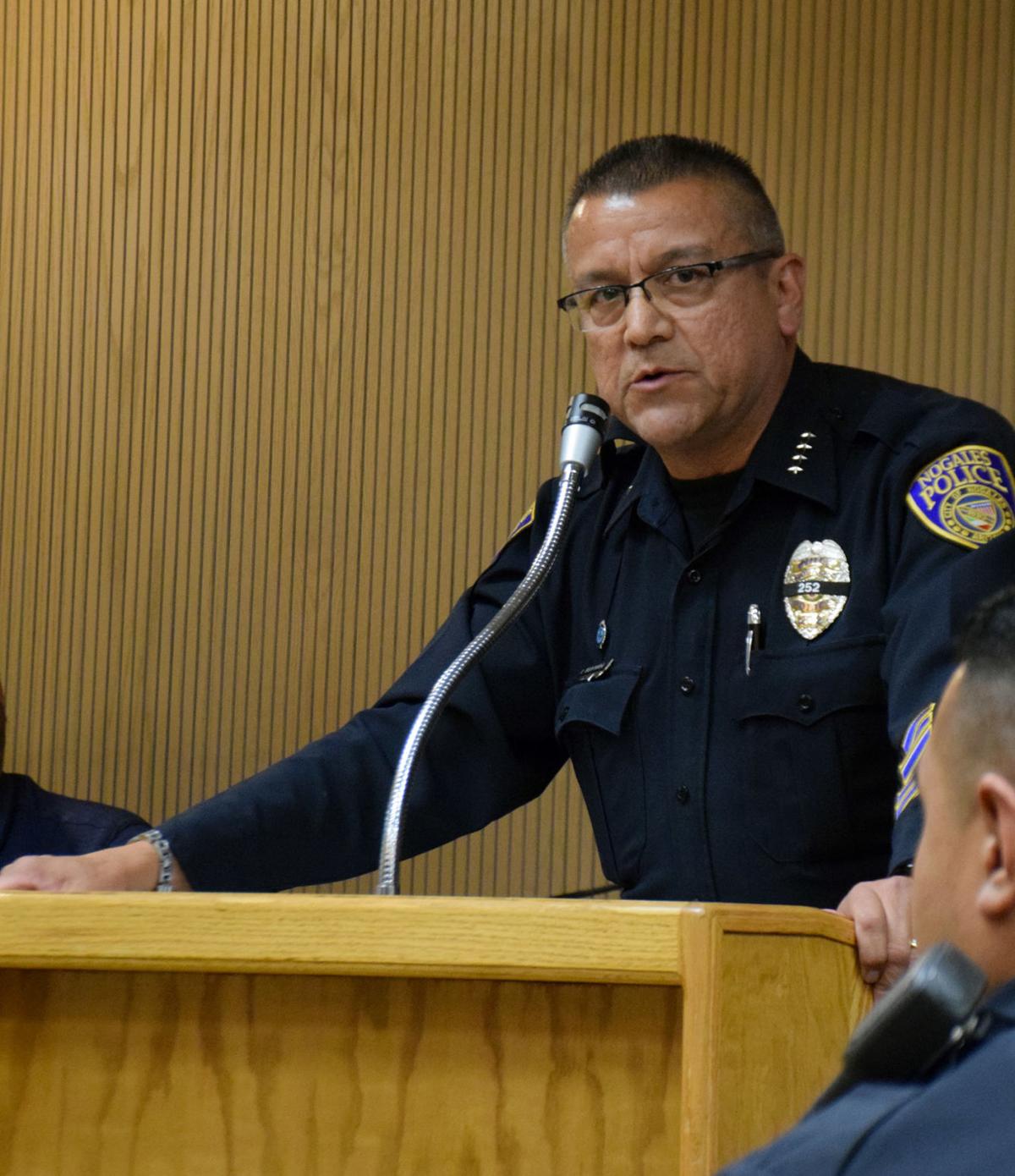 Nogales Police Chief Roy Bermudez thanks the Nogales commuity for the support he’s seen since the death of Officer Jesus Cordova last Friday. 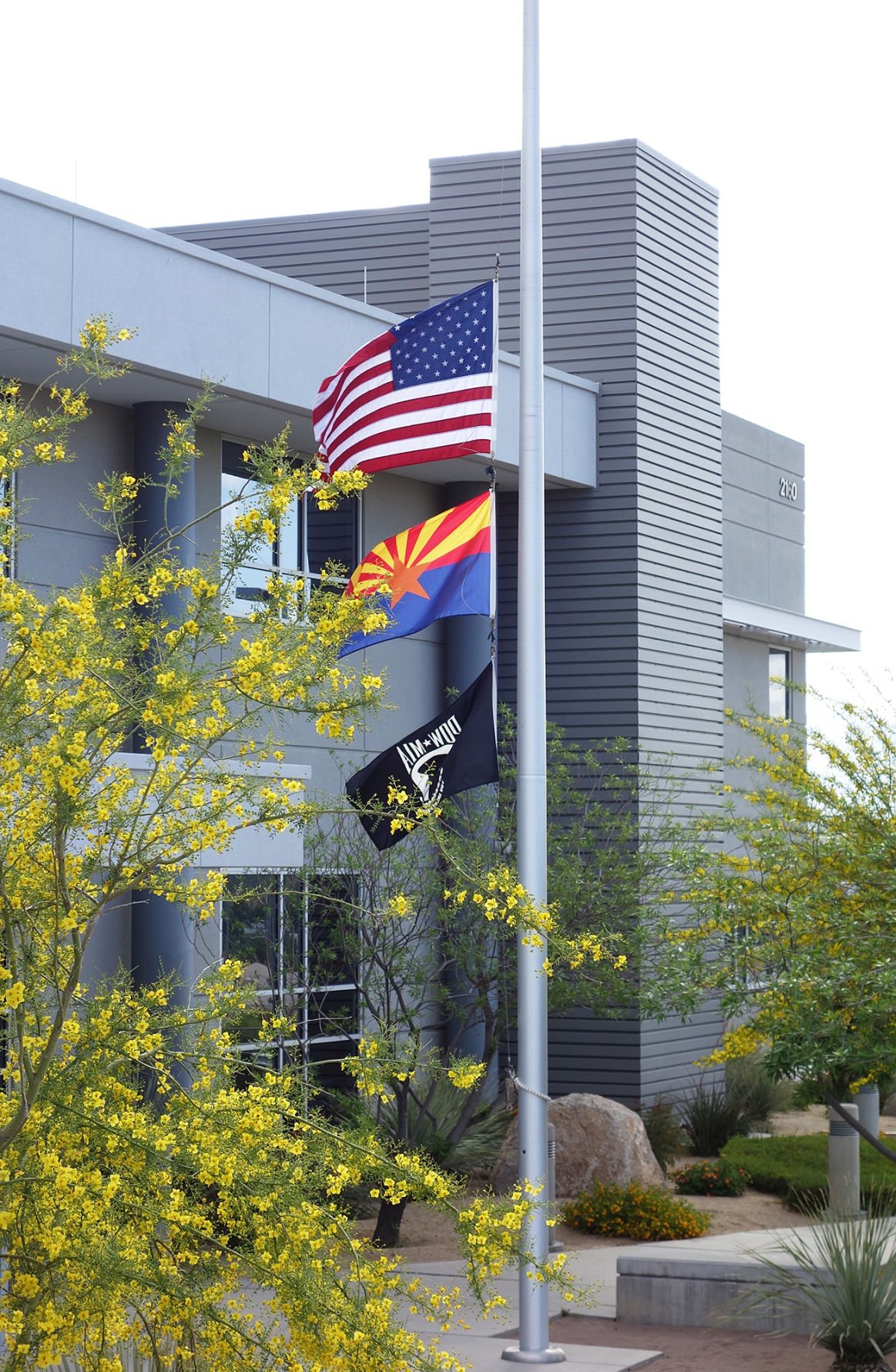 Flags fly at half-mast at the county courthouse on Wednesday in honor of NPD Officer Jesus Cordova.

Community members donated these diapers and baby wipes at the Nogales Fire Department Station No. 1 after a community member organized a diaper drive for Alyssa Cordova, the wife of slain Nogales Police Officer Jesus Cordova. Alyssa Cordova has three children and one on the way.

Nogales Police Chief Roy Bermudez thanks the Nogales commuity for the support he’s seen since the death of Officer Jesus Cordova last Friday.

Flags fly at half-mast at the county courthouse on Wednesday in honor of NPD Officer Jesus Cordova.

Speaking during a meeting Wednesday at which the Nogales City Council agreed to provide health insurance for Police Officer Jesus Cordova’s widow Alyssa Cordova and the couple’s three children and unborn son, Nogales Police Chief Roy Bermudez said he’s been overwhelmed by the support the community has offered since Cordova’s death last Friday.

“We’ve seen this community come together as it never has before. In the 34 years that I’ve been working for the Nogales Police Department, I’ve never seen the community together as it has been this last week,” he said. “And I just hope that we continue with this unity, with this teamwork, and calling ourselves and coming together as one and showing the rest of the nation what Nogales is made of.”

Bermudez said support has streamed in from across the city, Santa Cruz County and the nation after Cordova was killed.

“I can guarantee you that we’re going to come out stronger than we came in,” he said, adding that Nogales would pick up the pieces and “prove to Officer Cordova that laying his life on the line for the community, for his community that he so adored, was not in vain.”

Cordova, 44, was shot and killed in front of Villa’s Market on Mesa Verde Drive on the afternoon of April 27 after responding to a report of a car theft. The suspect was later taken into custody after a pursuit and is currently charged with 39 felony offenses.

After holding a moment of silence in Cordova’s honor on Wednesday, the city council showed its support for his family by unanimously voting to provide continuing health insurance coverage for Alyssa Cordova and her four children for the maximum allowable 18 months at $1,402 per month under a program known as Cobra. The council also asked the city manager and attorney to come up with a plan to provide lifetime health insurance for Alyssa and cover the children until they’re 27 years old.

The solemn council members said little during the discussion, but pushed to get as much coverage as possible for the family.

A day after a vigil at which a coalition of motorcycle groups presented Alyssa Cordova with funds they had raised at a car wash, local business owners Jesus “Chuy” Lopez and Ricky Maytorena presented the family with funds raised from more than two dozen local companies during an on-field recognition prior to a Nogales High School baseball game.

Elsewhere in the community, local resident Dora Urias organized a diaper drive for Alyssa Cordova, who is five months pregnant. Size two-six diapers, as well as gift cards, are being collected at the Tubac, Rio Rico, Nogales and Nogales Suburban fire stations. Donations can also be dropped off at United Way (855 W. Bell Road, Suite 140 in Nogales) or Thomas Produce (80 Old Tucson Road). The drive runs through May.

Local teachers called off a work-stoppage rally Monday out of respect for the fallen officer, and have been wearing blue-and-black ribbons in his honor. They’ve also raised money for the Cordova family, asking teachers riding buses to #RedForEd protests in Phoenix to make contributions to the family, and turning a rally on Thursday evening into an opportunity to collect more donations.

A GoFundMe campaign created by one of Officer Cordova’s cousins had also raised more than $29,000 for the Cordova family as of Thursday.

“This is just a way to show unity,” he said, adding that the funeral home has a policy of paying services for first responders killed in the line of duty.

Martinez added that law enforcement officers have honored and paid tribute to Cordova by watching over his body 24/7 at the funeral home.

“I have a soft spot for law enforcement, of course, and children,” said Thysell, a former police officer and Border Patrol agent who raised four children and fostered 20 more.

In addition to the Nogales City Council, other officials at the local and state levels have honored Cordova’s life with speeches, moments of silence and flags flown at half-mast at government buildings. Gov. Doug Ducey ordered that flags be flown at half-mast on Monday at all state buildings, and some in the local community have kept them lowered throughout the week.

A tearful Supervisor Rudy Molera gave his condolences at a Santa Cruz County Board of Supervisors meeting Wednesday, saying that NPD “suffered a great tragedy which broke the hearts of our entire community.”

Molera called the outpouring of community support for Cordova and his family “incredible,” and said the officer will be missed.

“We are a small community and we will get through this by pulling together,” Supervisor Bruce Bracker said.

Supervisor Manuel Ruiz said people learn about police being killed on the news and wonder how communities cope.

“And then it happens here and it’s such a tragedy,” Ruiz said, saying he feels especially sad for Cordova’s children.

Molera added that the unity the community has shown since Cordova’s death “says a lot about this officer, he was a great individual.”

Arizona state senators also held a moment of silence for Cordova on Wednesday in Phoenix, according to a Facebook post by State Sen. Andrea Dalessandro, who represents Legislative District 2, which includes all of Santa Cruz County.

Speaking to the hundreds of people who gathered Sunday evening at a vigil for Nogales Police Officer Jesus Cordova, many wearing blue in suppo…