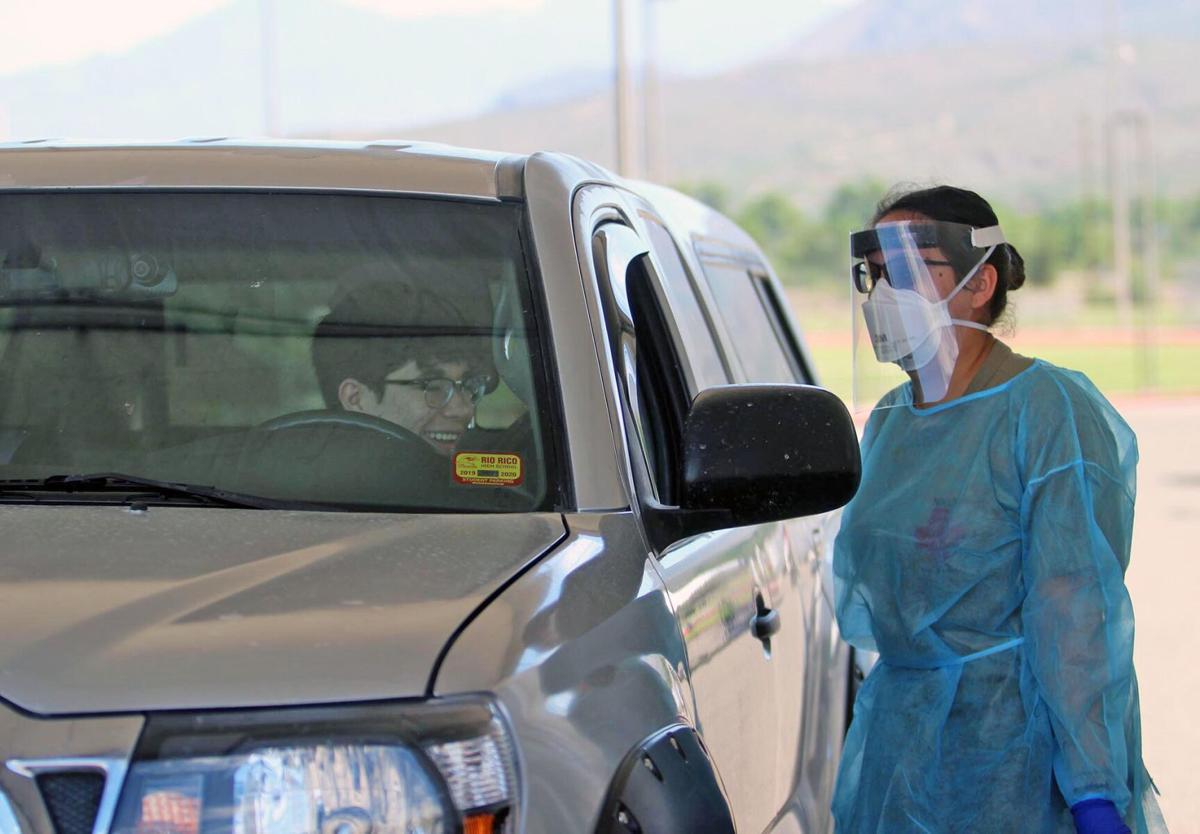 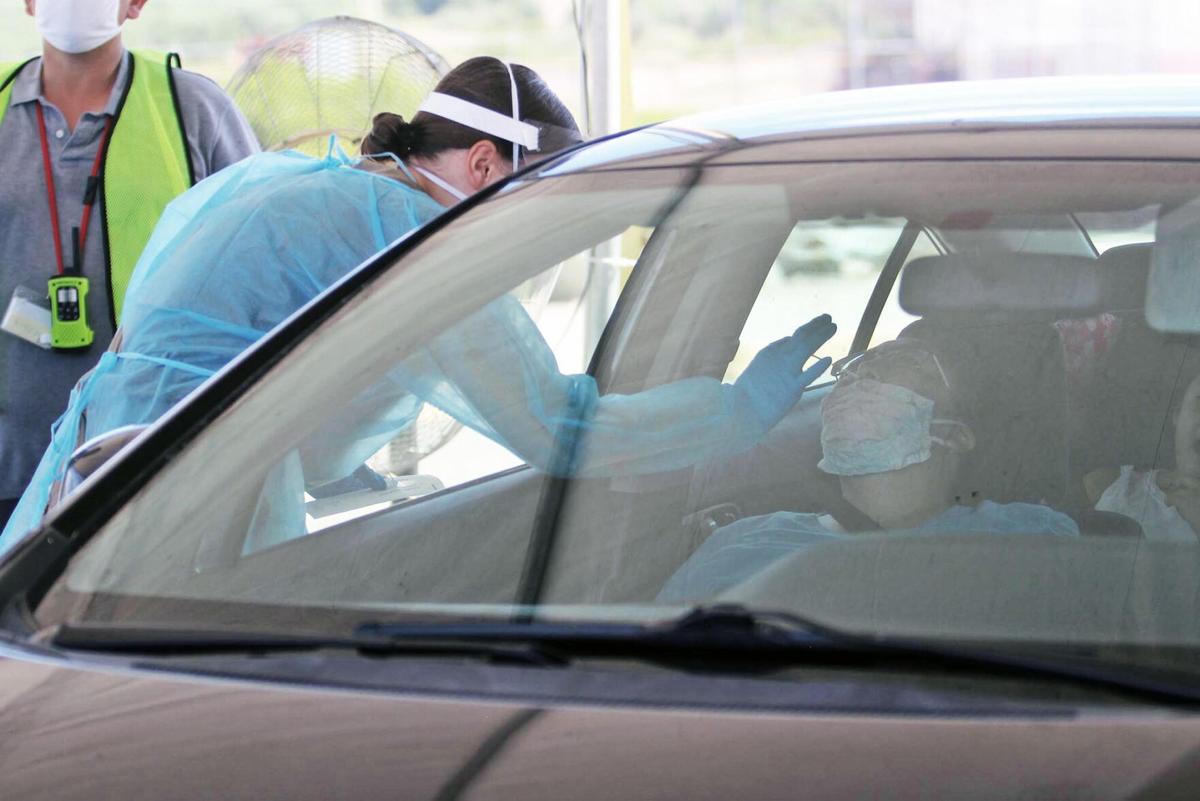 Marisela Alegria, 44, gets tested for coronavirus at the testing blitz at Rio Rico High School on Friday morning, July 31. 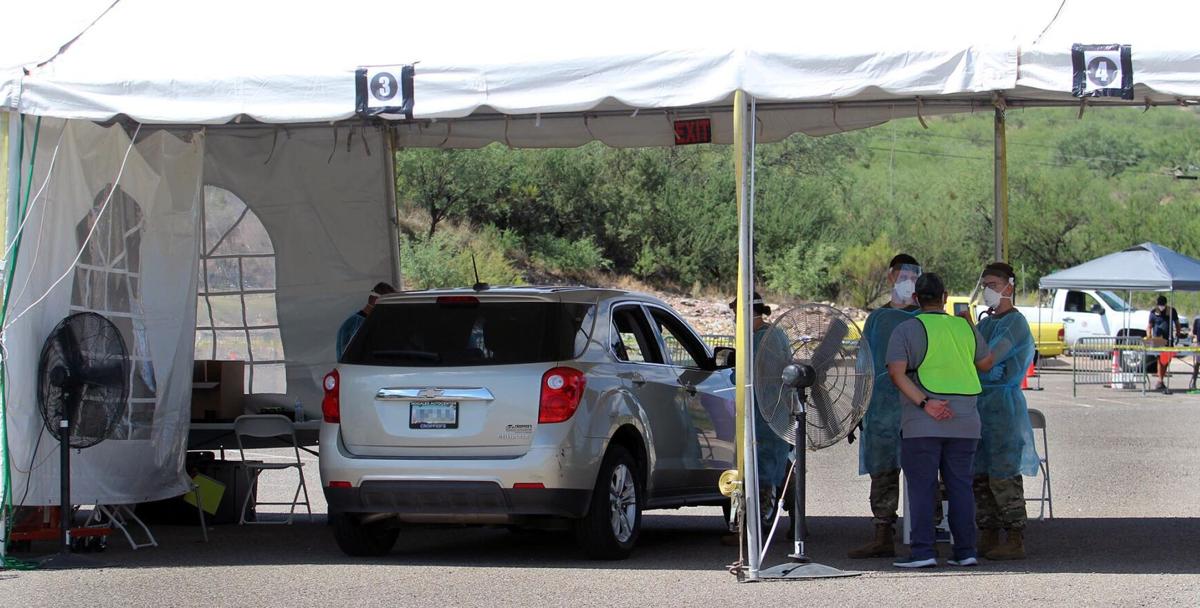 Two National Guard medics approach a car in one of the drive-through spaces at the COVID-19 testing blitz at Rio Rico High School on Friday, July 31.

A second round of free COVID-19 testing that began last Friday was so eagerly anticipated, county officials opened one site a half-hour earlier than scheduled to accommodate the long stream of cars that had lined up for the service.

The peak lasted for about an hour after the testing site at Rio Rico High School opened for business. But by 9:30 a.m., cars drove sporadically through the stations that were set up to organize the flow during the two-day event held on Friday and Saturday mornings.

Another testing blitz simultaneously ran both mornings at Patagonia Union High School for residents in the eastern side of county.

“Actually, it went really well. We had a good flow,” Terrell said, noting that combined with the first blitz events held July 25 and 26, the county tested approximately 1,900 people.

As of Monday morning, he said, county officials couldn’t determine the positive rate from the overall testing efforts considering they were still waiting to receive most of the results from the Rio Rico and Patagonia blitzes.

However, the Nogales blitz wrapped up with roughly less than 5 percent of participants testing positive, he said.

That’s far lower than the 27-percent positivity rate that the Arizona Department of Health Services was still reporting for Santa Cruz County on Monday on the so-called PCR test that detects active infections. The statewide rate was 14.4 percent.

The county and state COVID-19 data has not yet reflected the numbers from the blitzes, Terrell said, explaining that there have been some issues in the lab’s reports to the state.

He added that only the positive results from the blitzes have already been entered in the state’s database because county officials insert those numbers manually.

“The fact that we haven’t got the negatives in, that’s why it’s showing a higher rate than what it really is,” Terrell said. “If our negatives go in there, it’s going to drop that positivity rate.”

As a result of that reporting lag, the ADHS was reporting 7,782 total PCR tests for active coronavirus infections given to Santa Cruz County residents – an increase of barely more than 700 since the start of the local blitz.

According to the county’s data, 2,607 local residents had tested positive for COVID-19 as of Monday, an increase of 85 from the previous week.

While most testing in Santa Cruz County prior to July 25 was performed on symptomatic people, the blitz has opened up that possibility for everyone, with the expectation that broadening the testing pool would bring down the positivity rate and provide a better idea of the extent of the virus in the community.

Marisela Algeria, 44, of Rio Rico, for example, said she hadn’t shown any symptoms for COVID-19, but wanted to get tested as a precaution after recently coming in contact with a person who tested positive for the virus.

Similarly, 18-year-old Trevor Riling, a recent RRHS graduate, said he wanted to get tested before moving forward with his college plans.

Speaking after having his nose swabbed last Friday in Rio Rico, he said: “It didn’t really hurt, but it definitely felt uncomfortable.”

With the county’s six planned blitz events now in the books, Terrell said his department will review the results to determine what action to take in the future.

“We’ll take a look at the data we do have, and then we’re going to determine whether we put on any more blitzes, or we supplement Mariposa, Holy Cross and NextCare to do the testing from this point on,” he said.