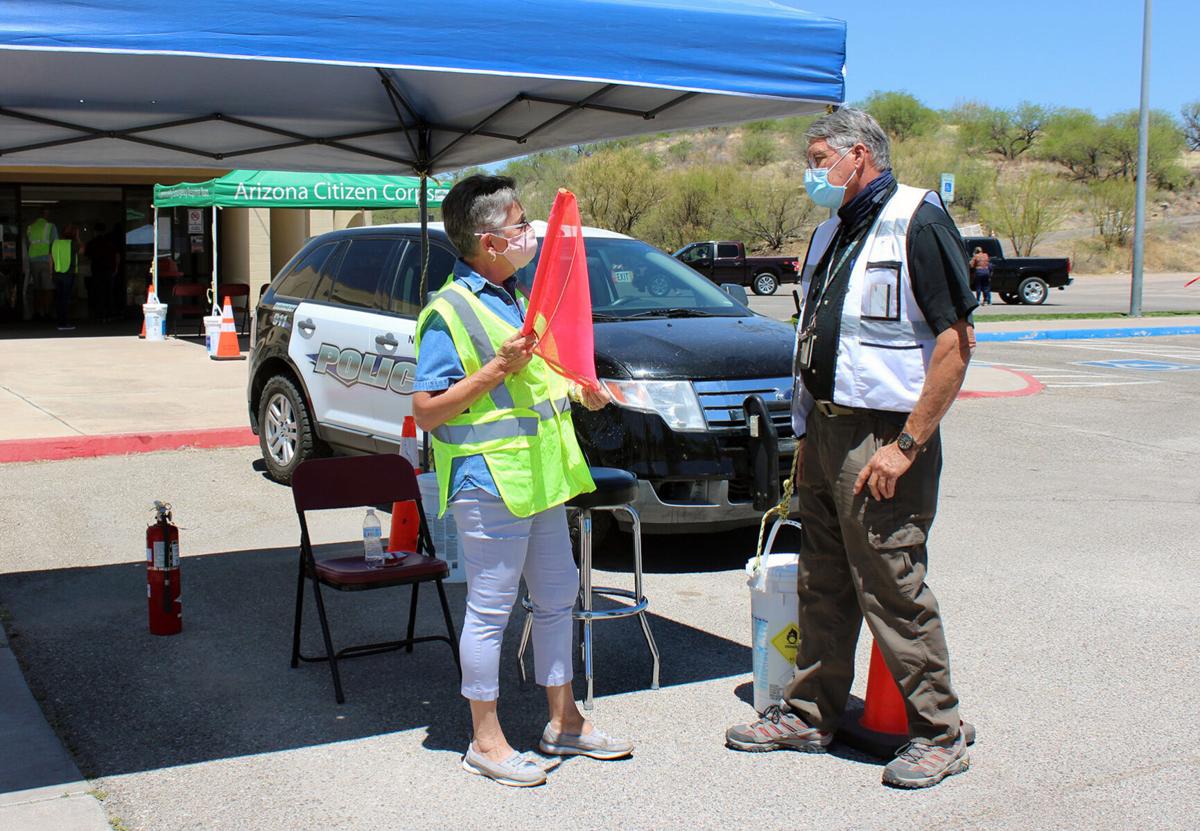 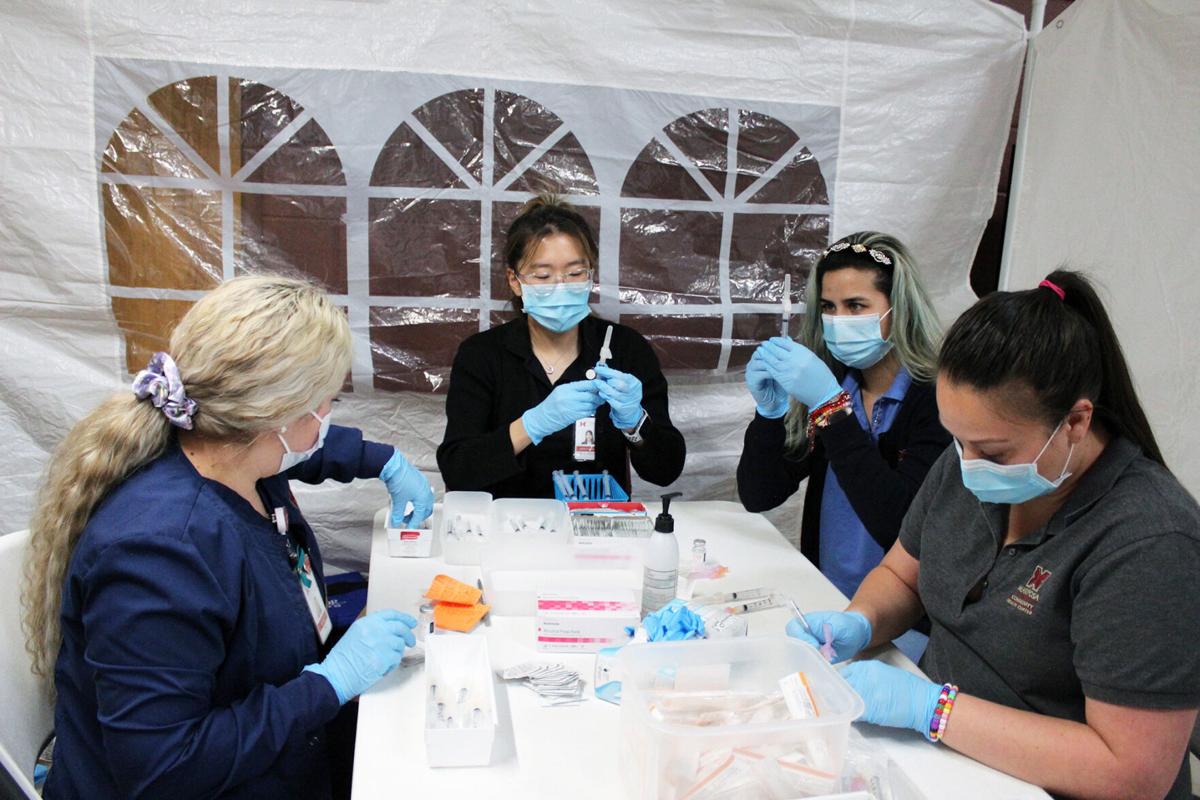 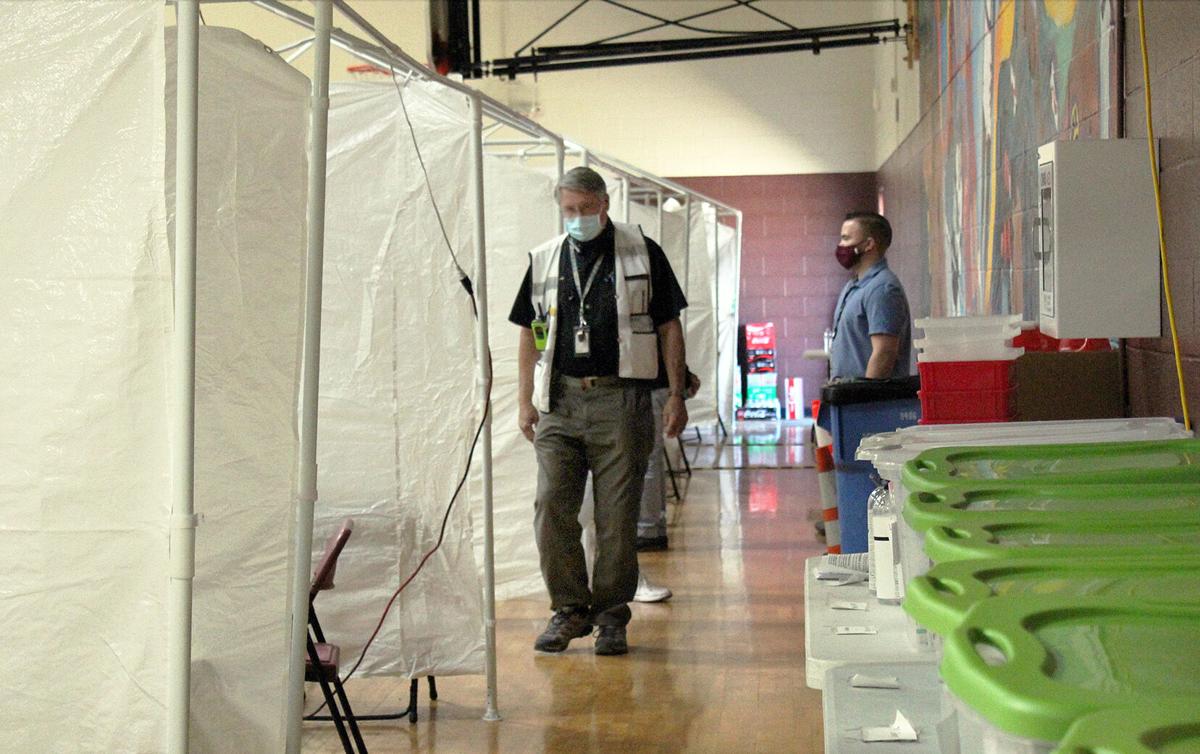 Ray Sayre walks through the hallway leading to the vaccination stalls at the Nogales Recreation Center, while a worker stands by ready to help. 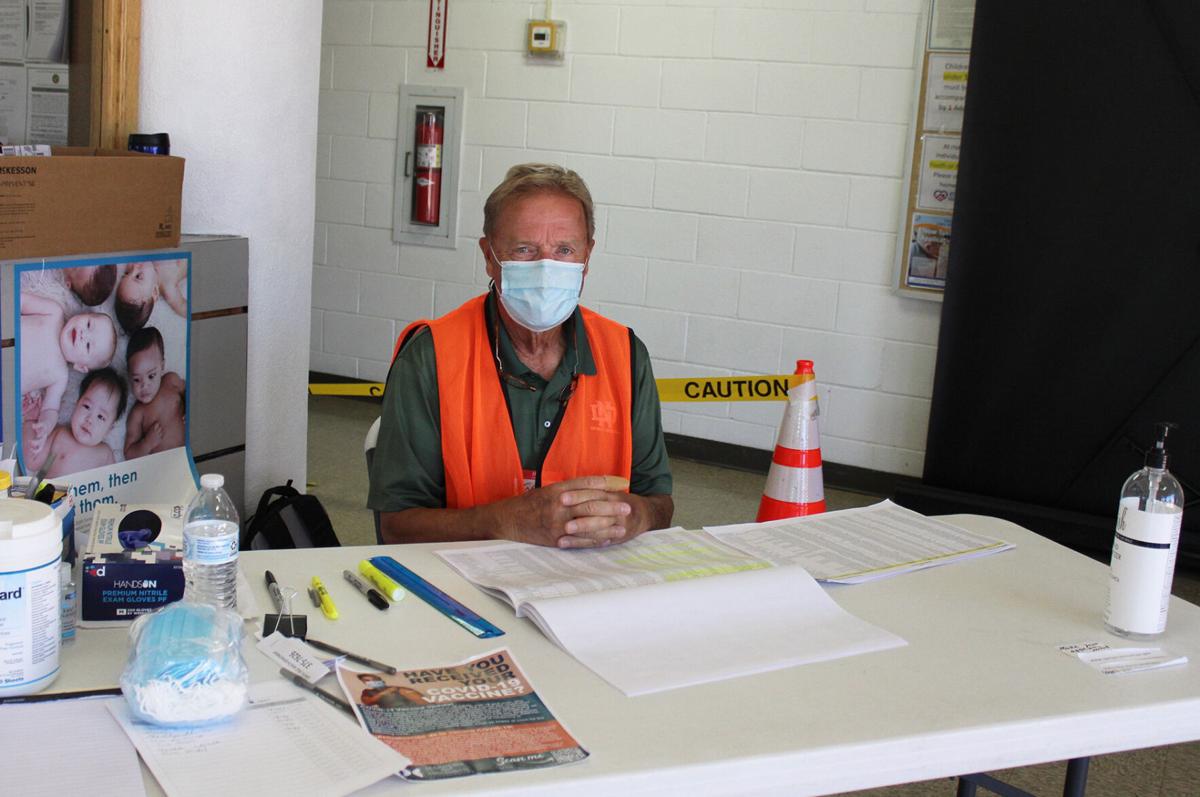 John Sagsveen, a volunteer at the Nogales Recreation Center vaccination POD, sits with a long list of people who had scheduled appointments to receive their COVID-19 vaccine on April 20. 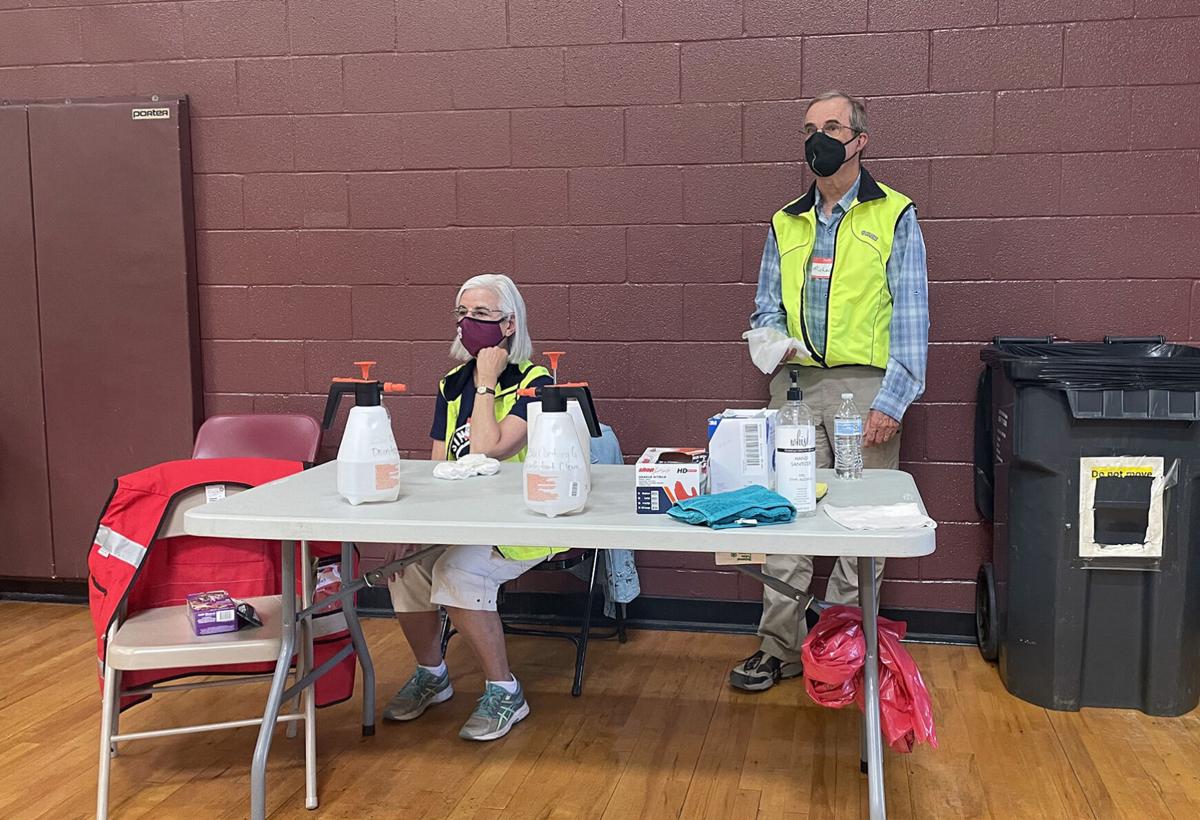 Volunteers Lorraine Backman and Michael Gaudreau wait patiently to disinfect the chairs as vaccinated folks finish their waiting period for any reactions to the Moderna vaccine. 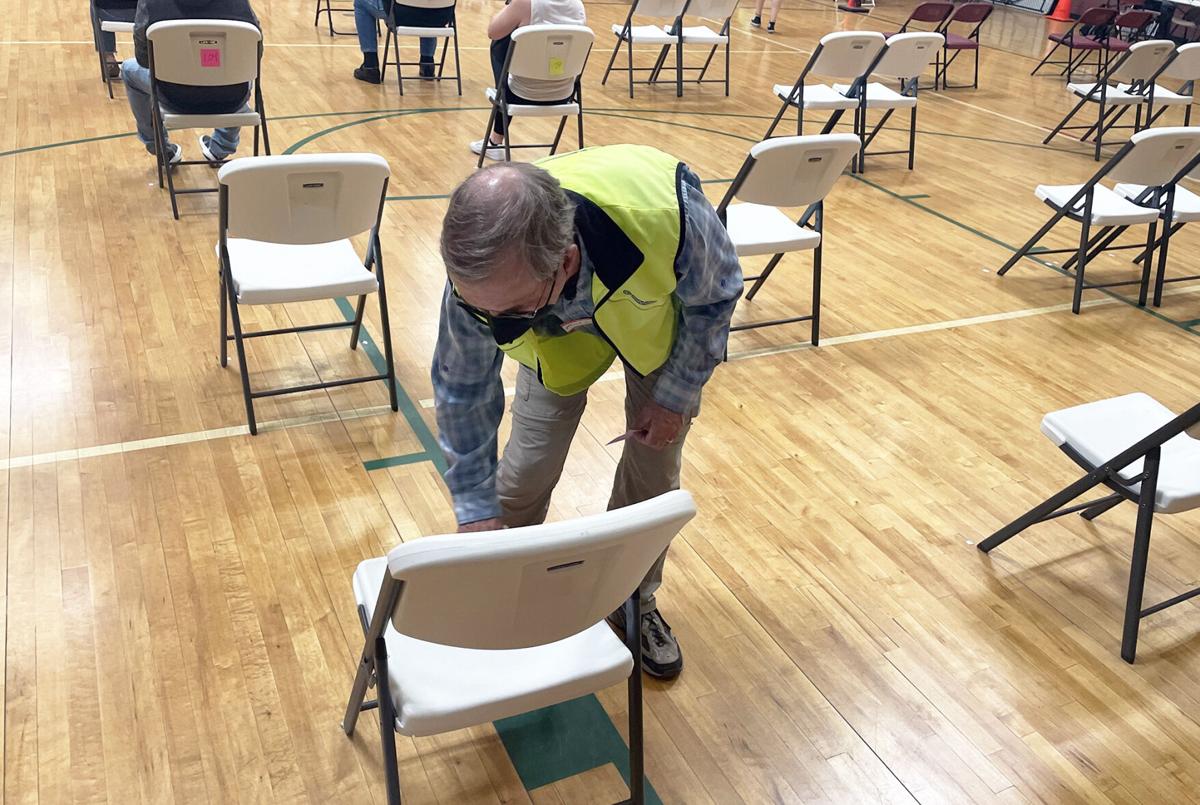 Michael Gaudreau, a volunteer at the Nogales Recreation Center vaccination POD, disinfects one of the chairs after a vaccinated folk finished their waiting period for any reaction to the Moderna vaccine. 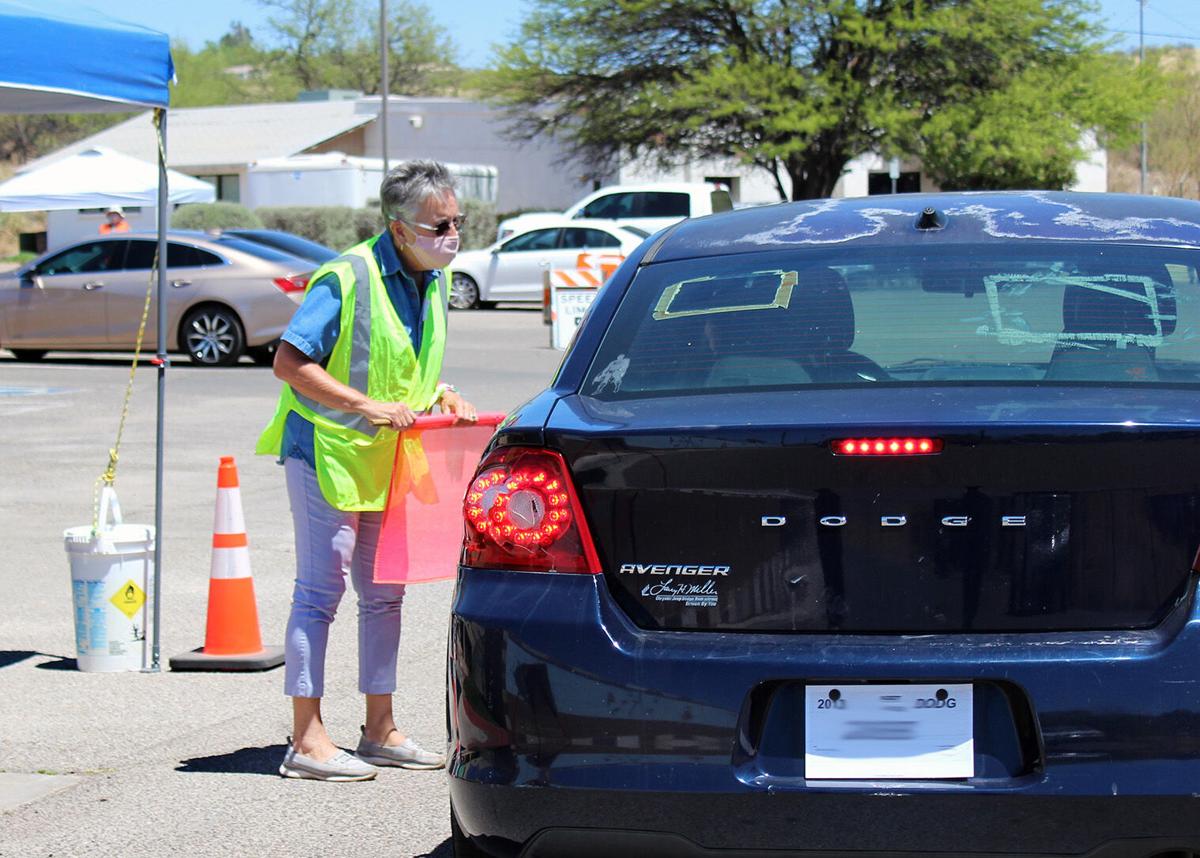 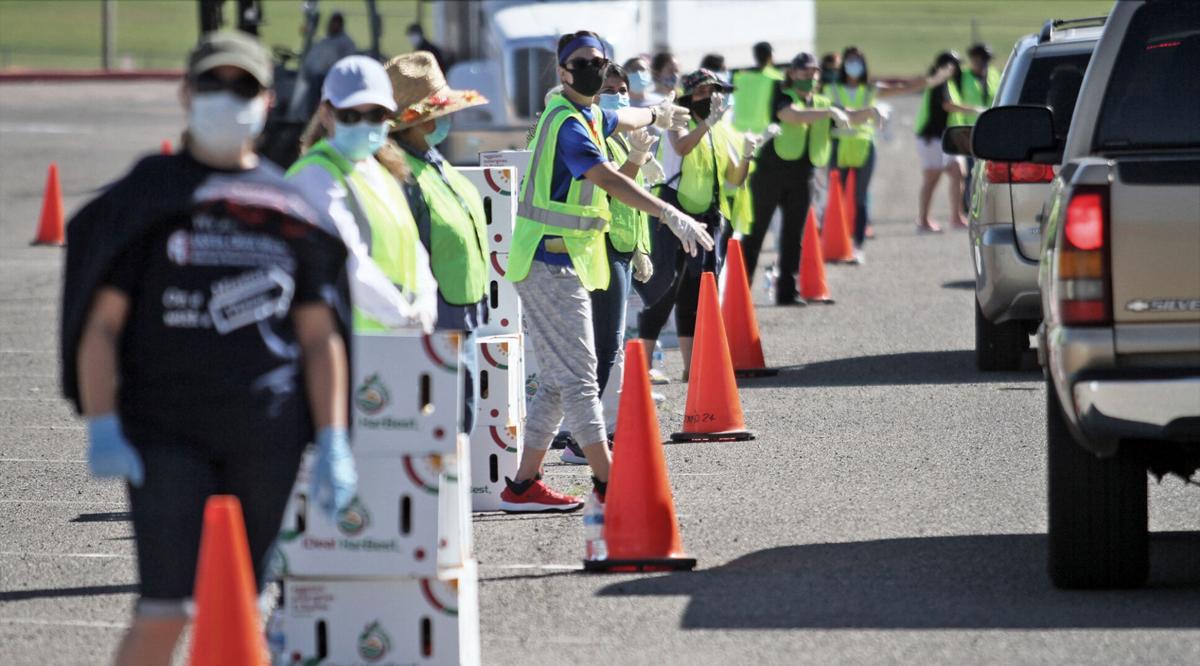 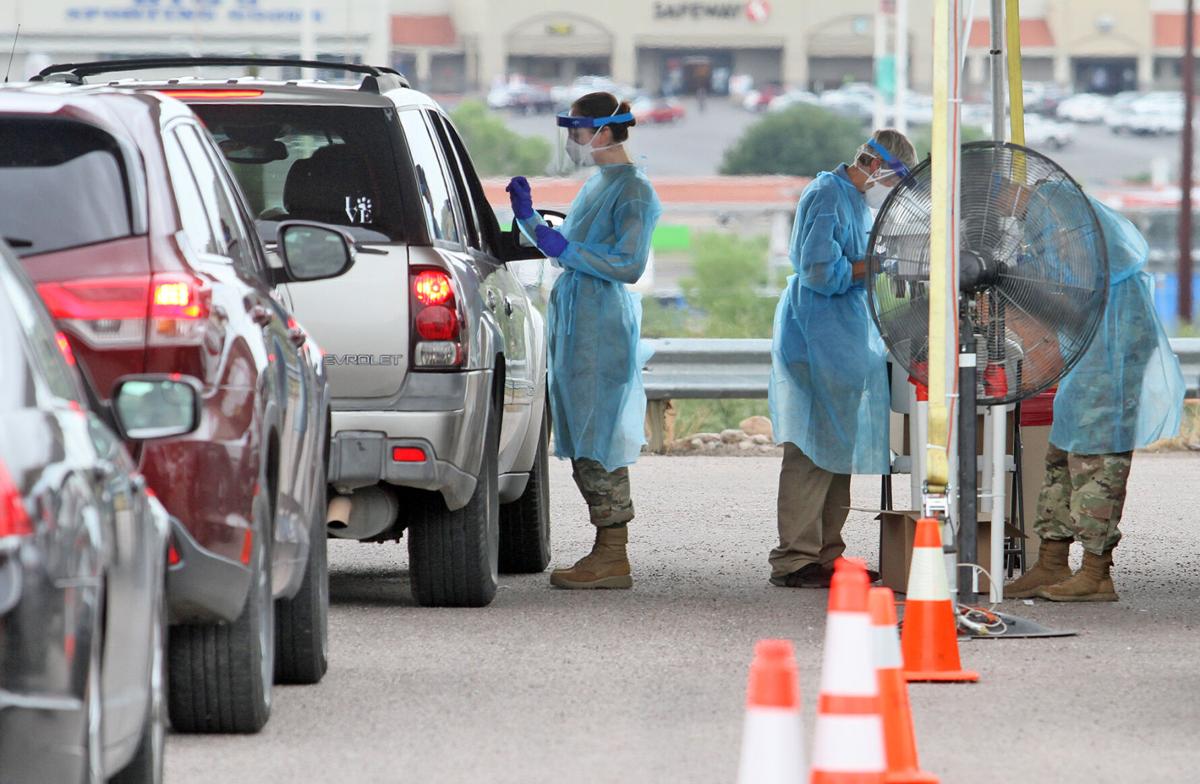 Cars line up for free COVID-19 testing in July 2020 at the County Complex in Nogales.

We have lifted the paywall on this story. To support essential reporting, please consider becoming a subscriber.
1 of 5

Ray Sayre walks through the hallway leading to the vaccination stalls at the Nogales Recreation Center, while a worker stands by ready to help.

John Sagsveen, a volunteer at the Nogales Recreation Center vaccination POD, sits with a long list of people who had scheduled appointments to receive their COVID-19 vaccine on April 20.

Volunteers Lorraine Backman and Michael Gaudreau wait patiently to disinfect the chairs as vaccinated folks finish their waiting period for any reactions to the Moderna vaccine.

As cars rolled into the Nogales Recreation Center on a recent Tuesday afternoon, a volunteer wearing a neon vest confirmed that the person had a scheduled vaccination appointment and then motioned for other volunteers to lead the vehicle to an available parking spot.

Once inside the building, which had been converted earlier this year to a COVID-19 vaccination clinic, the patient was guided through each station in the inoculation process: confirming the appointment, filling out paperwork about their health, taking the needle to the arm, and waiting out a 15- to-20-minute period in case of an allergic reaction.

The procedure has been successfully executed again and again with the collaboration of various public and private entities. But the process itself was developed by the County Office of Emergency Management (EM), a department that has worked behind the scenes since the start of the pandemic to organize several community events that have won praise for their efficiency.

“We had an existing plan, which was good,” Ray Sayre, EM director, said in reference to the flu pandemic plan that his department had developed alongside the County Health Services Department.

“Then when the pandemic actually occurred, some of the base elements of those plans were utilized, but you always have to adapt significantly to what you have in hand,” he said.

In terms of human resources, the department’s staffing is limited and includes only two other members: Sobeira Castro, the EM specialist, and Frank Granados, a part-time planner.

Still, by taking on extra work and hours, the team was able to plan and implement a series of events to safely provide services for Santa Cruz County residents during crucial times, including produce distributions, testing blitzes and, most recently, the vaccination clinics.

County Manager Jennifer St. John noted that the EM team works hard all year long to organize and coordinate events ranging from funeral processions to big community festivals. But they have been a “tremendous support” particularly during the pandemic.

“These professionals are trained to handle stressful and unplanned events,” St. John said. “They practice and train all year long for numerous types of emergencies so when something happens, they’re prepared.”

The produce giveaways, which were among the first events that Sayre and his team brought to fruition following the pandemic’s arrival to Santa Cruz County, came about when stay-at-home orders led to a decrease in demand for local produce companies.

Rather than throwing away the excess fresh fruits and vegetables, the business owners worked alongside county officials to hand out the food at no cost to community members during mass drive-through events.

But with little planning done in time for the first produce giveaway, high demand overwhelmed the event at Nogales High School and a long line of cars backed up along Frank Reed and Mariposa roads as people waited to receive their free boxes of fresh produce.

“There were some inherent problems with that in terms of planning. We started having some back-up of traffic and some other issues,” Sayre recounted last month. “So emergency management became involved in that.”

The emergency management personnel quickly developed an Incident Action Plan (IAP) in time for the next produce giveaway, in which they analyzed and detailed the objectives, communication, safety, weather, flow dynamics, and other factors.

The subsequent distributions were held at the parking lots of Rio Rico High School and Oasis Cinema in Nogales, where the team was able to cater to a large crowd while mitigating the impact of traffic. They also brought additional people on board to help facilitate and carry out the events.

Law enforcement agencies helped manage traffic, the County Public Works Department created signage to direct people to the appropriate areas, and dozens of volunteers – including members of the school communities and Knights of Columbus – helped load the boxes of food into vehicle trunks.

With local warehouses still facing a surplus of fresh produce, Sayre said he then requested National Guard troops to repackage and haul additional loads of food to other counties in Arizona.

The relationship with the National Guard also came in handy when it was time to plan the next big pandemic-related event: the COVID-19 testing blitzes starting in late July.

“They (National Guard troops) were the primary testers. They would handle the testing, handle the documentation, the logging of the samples and storage of the samples,” Sayre said, adding that the rest of the support came from county employees, volunteers and the Santa Cruz Valley Unified School District.

While the troops swabbed people’s nostrils to collect testing samples, the rest of the workers and volunteers helped patients fill out paperwork, took temperature checks, directed traffic and other organizational details.

“We had a good number of volunteers… Thanks to the community, everyone did a good job,” Sayre said, noting that building strong relationships has been a key factor.

During the first two blitzes in Nogales, nearly 1,000 people had their noses swabbed at one of the testing bays set up at the County Complex parking lot in Nogales. Despite the demand, the orderly system allowed people to complete the process in less than 30 minutes during peak periods, and less than 10 minutes later on.

First Lt. Nish Patel, a public health officer with the Arizona National Guard, told the NI at the time that he was impressed with the county’s set-up. “They are well-prepared,” he said.

Looking back on the plans that his team – with the help of community partners and volunteers – carried out at the different events, Sayre said he wouldn’t change a thing.

“At the end of each day, we had what we call a hotwash, where all the players get together and we evaluate our performance,” he said. “We hotwash what we can change for tomorrow, what we can do different and how we can make this a better experience for everyone.”

Those changes were implemented at the start of each day, he said, and included feedback from the people who were doing the work.

At the produce distributions, those changes meant opening vehicle trunks in one station, then moving the cars along to be loaded at the next station. It also meant adding more tables, so the volunteers didn’t have to lift the heavy boxes too high.

When the time arrived to begin vaccinating, Sayre said his team had prepared plans to turn several locations into vaccination clinics if the county were to receive large allocations of vaccines.

County and Mariposa Community Health Center personnel even tried out a full-on drive-through vaccination effort for a day, but Sayre said he shut down that possibility over safety concerns that involved moving car traffic, exposed electrical chords and having to bring in generators.

“I just wasn’t willing to sacrifice the safety of our volunteers to maintain a drive through,” he said.

Instead, they opted for a hybrid model at the Nogales Rec Center, where most vaccinations take place indoors, but patients may also get their shots in their vehicles if they have mobility issues.

Earlier this month, Sayre proudly said that the hotwash had helped all personnel at the vaccination center be more time efficient throughout the process.

Their initial time from greeting people inside the building to actually getting shots in arms, he said, was 26 minutes. After working alongside MCHC on quality improvements, the time improved to 12.5 minutes.

“Then last week we did a timing run and we were at 8 minutes flat from greeter to shot in the arm,” he said.

That smooth and efficient system has not gone unnoticed by members of the community who have been vaccinated at the Nogales Rec Center.

In a letter to the editor published in the NI on April 2, Tumacacori resident Daniel Coogan said he was “incredibly impressed” by the process.

“Both times, I was in and out within 35 minutes,” Coogan said of his two vaccination appointments.

Nicholas J. Bleser of Tubac also applauded everyone involved in the effort in a Jan. 15 letter to the editor, writing: “We were processed quickly with friendly courtesy and a minimum of paperwork.”

Dr. Eladio Pereria, MCHC’s chief medical officer who has worked directly with the emergency management team to coordinate the vaccination process, said planning and communication had made all the difference.

“I think the operations at the Rec have been a result of the effort that they have played from setting up the tables, the communication, the tents, the traffic monitoring, all of that,” Pereira said. “I think that’s made a huge difference compared to other counties where that collaboration has not been as productive.”

St. John added that those involved in the operation took comfort in knowing that the EM team was always on scene, ready to take care of issues and make improvements along the way.

Looking forward, Sayre said the next IAP his team has to develop involves finding the best way to scale down the mass vaccination operation at the Nogales Rec Center.

He pondered the idea of reducing the frequency of the clinics to three or two days of inoculations per week, or transitioning the effort to community partners.

At the same time, Sayre and his team have to think about what comes next with the pandemic, and how they might plan for it.

“I think we need to keep an eye on the science and, if indeed it comes to pass that a booster is going to be required…then how do we best accomplish that as a community?” he said.