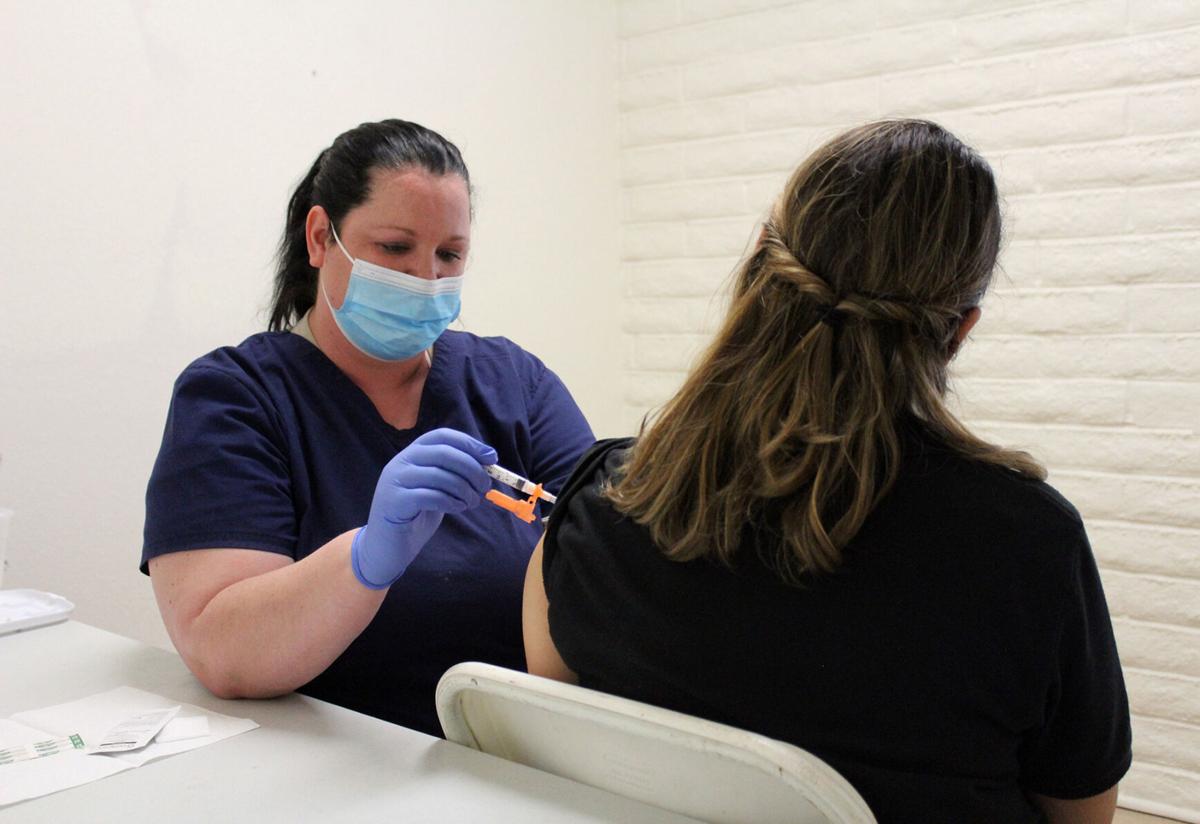 Cherisha Nichole Henderson, a paramedic with Remote Medical, shows the steps she takes in administering a vaccine against COVID-19 at the temporary vaccination center in Rio Rico last Friday, April 16. 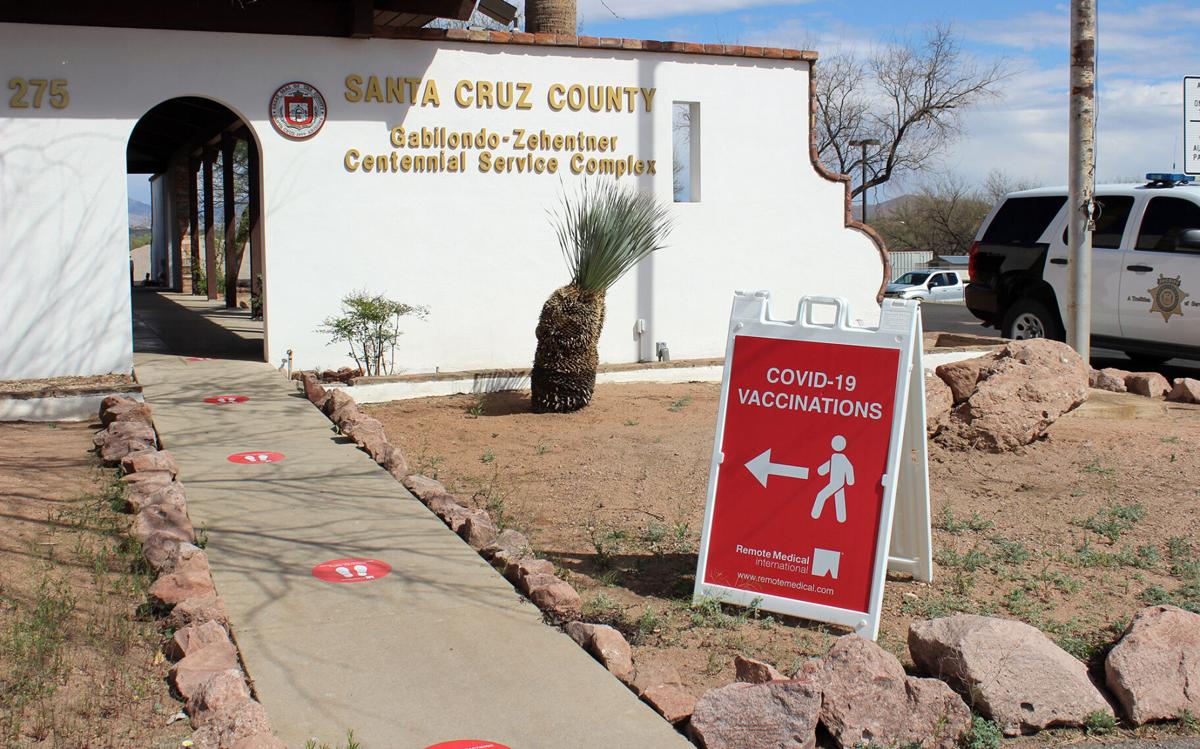 COVID-19 vaccinations at the point of distribution in Rio Rico are administered by Remote Medical healthcare workers.

Nogales resident Sandra Santacruz said she got her first vaccine against COVID-19 at the end of last month. This week, she was preparing to receive her second dose and achieve full inoculation within the following days.

And while she said she was very excited when she booked her first appointment, Santacruz was feeling a bit nervous for the second.

“I’ve heard a lot of things that the second dose hits a bit harder,” she said in reference to the side effects of the Moderna vaccine as she shopped at the Mariposa Mall in Nogales on Monday. “But whatever it is, I’m still going to get it.”

Santacruz represents one of 24,093 local residents and workers who had received at least one dose of a vaccine against COVID-19 as of Monday morning. Of those, 15,242 had been fully inoculated by the start of this week.

The numbers gave Santa Cruz County the highest vaccination rate in Arizona – 45.3 percent, according to the Arizona Department of Health Services coronavirus dashboard. Of the state’s 15 counties, Santa Cruz was ahead of the next-highest performers, Coconino and Greenlee counties, which had inoculation rates of 44.1 and 42.5 percent, respectively. The statewide rate was 38.1 percent as of Monday.

Dr. Eladio Pereira of the Mariposa Community Health Center – which has handled the majority of local inoculations – touted the collaborative effort that he said was key to putting Santa Cruz County at the top of the list.

“I think the success is related to a good working relationship,” Pereira told the NI last Friday. “It’s a monumental task to vaccinate so many people within the relatively short amount of time, so…we decided we needed the collaboration from everybody – the county, the city, (MCHC), private companies, the volunteers.”

The state’s vaccination rates for counties are based on the number of people who have received at least one dose, divided by the population of the county. The figures aren’t precise – they are based on state-generated population estimates that don’t separate out the segment of each population that isn’t eligible for a vaccine (i.e. children), and at least in Santa Cruz County, they include out-of-county workers who were able to get their vaccine doses locally.

Still, Santa Cruz County’s relatively strong performance in vaccine distribution represents a sharp turnaround from earlier in the pandemic, when the county stood out for having one of the state’s highest or the highest COVID-19 infection and test positivity rates, and ranked at the bottom of the list in coronavirus testing.

Pereira speculated that the high infection rate last year might have played a role in local residents being more receptive to getting the vaccine. And, that acceptance has also helped county health officials lobby for more vaccine doses to be allotted to the local area.

“I think, from the beginning, we had a good process to vaccinate people and the county and health department advocated on our behalf,” he said, adding: “We were vaccinating a significant amount of people, and so they allocated more vaccines for us.”

A report published last weekend in the New York Times, which examined data for nearly every county in the United States, found that both willingness to receive a vaccine and actual vaccination rates to date were lower in counties where a majority of residents voted in 2020 for former President Donald Trump. In Santa Cruz County, President Joe Biden received an overwhelming 67.1 percent of the presidential election votes cast.

Asked if he thought politics might also play a role in local vaccination rates, Pereira said: “It’s possible that people make decisions based on other things that are not healthcare, but at least we promoted (vaccination) based on the benefits of the vaccine more than anything else.”

Santa Cruz is also the smallest county in the state geographically, which has made it relatively easier for residents to travel to the county-run vaccination site in Nogales.

As of Monday, Santa Cruz County had administered more than 37,850 doses of the 43,200 it had been allocated since the state began its vaccine distribution. That brought the county’s dose distribution rate to just under 88 percent. And some of the unused vaccines are single-dose Johnson & Johnson shots, which MCHC is keeping in storage until a temporary pause on their use is lifted.

After hearing that so many local people have been receptive to getting the vaccine, Santacruz, the Nogales resident preparing for her second dose, said she felt optimistic about the community’s health.

County Manager Jennifer St. John noted that there has been a decrease in demand for vaccines within the past two weeks.

What does she attribute that to? The people who most want to get their vaccines have already gotten them, St. John said.

She noted that county officials had initially estimated that roughly 25,000 people ages 18 and older in Santa Cruz County would want to get the vaccine, and the state’s numbers showed that the county is already approaching that mark.

In that context, the county is expanding its vaccination efforts to reach the segments of the population that have a more difficult time traveling to the vaccination clinic at the Nogales Recreation Center.

Santa Cruz County officials partnered with mining company South32 to open a new point of distribution (POD) of vaccines last week at the Gabilondo-Zehentner Centennial Service Complex in Rio Rico. The effort will be extended to Patagonia for only one day on Friday, April 23.

“We started these discussions with South32 back in February… when the demand was great and when we were hearing that the vaccines would be significantly increased by the end of March,” St. John told the NI. “So all of this was put into place prior to the demand going down.”

She added that South32 is funding the additional PODs by covering healthcare services from Remote Medical, while the county provides the vaccines.

County officials allocated 800 Moderna and 100 J&J doses to the Rio Rico POD for the week starting April 12, with the J&J doses meant to be administered that Monday. However, after the CDC recommended a pause on distribution of the J&J vaccine, the POD was put on hold until the next day when they continued with Moderna doses.

Just over 260 people were vaccinated between Tuesday and Thursday of last week at the Rio Rico POD, St. John said. Most of those were first doses, though personnel on scene also provided second doses for a few individuals who walked in and asked for them.

This week, St. John said, the Rio Rico site was allocated a total of 1,000 doses.

The South32 contract for the vaccination PODs ends on April 30, but St. John said that vaccine allocations for the week of April 26 will depend on the demand seen this week.

“They can vaccinate that third week with the amount that they have already been allocated, more than likely,” St. John said, noting that the county could still provide more doses for a third week if the need is there.

She added that the Nogales and Rio Rico/Patagonia efforts are being booked through separate means to avoid confusion.

The Santa Cruz County Health Services Department on Monday reported 7,844 confirmed COVID-19 in the community, along with 173 deaths and 549 hospitalizations, since the start of the pandemic. That’s a one-week increase of 22 cases; the number of deaths and hospitalizations was unchanged from a week earlier.

In Nogales, Sonora, there had been a pandemic total of 4,500 COVID-19 cases and and 496 deaths as of Sunday night, according to the Sonora state government. That represented an increase of 14 cases and two deaths compared to a week before.