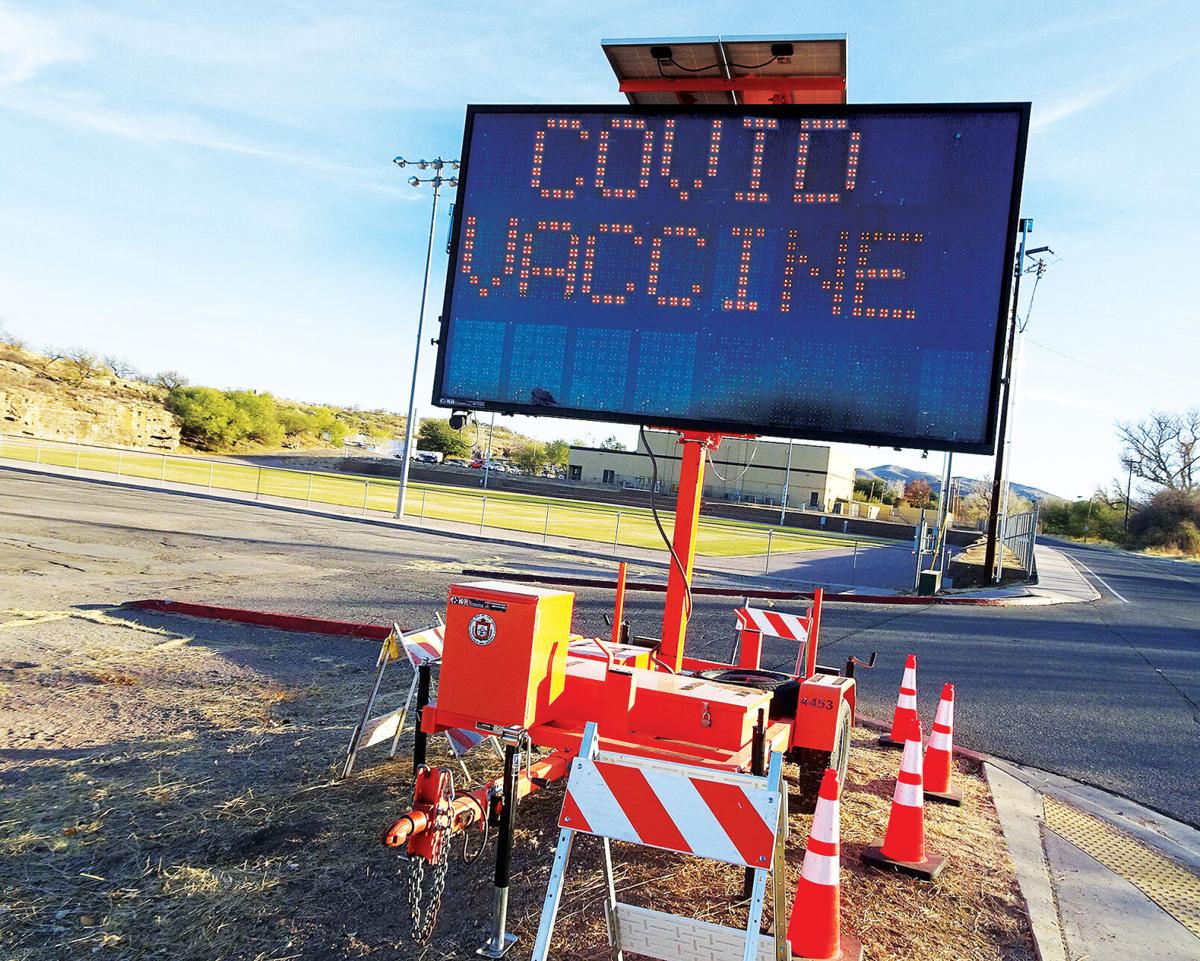 A sign on Hohokam Drive in Nogales advises of the COVID-19 vaccine clinic being held Wednesday at the city’s Recreation Department gym, seen in the background. 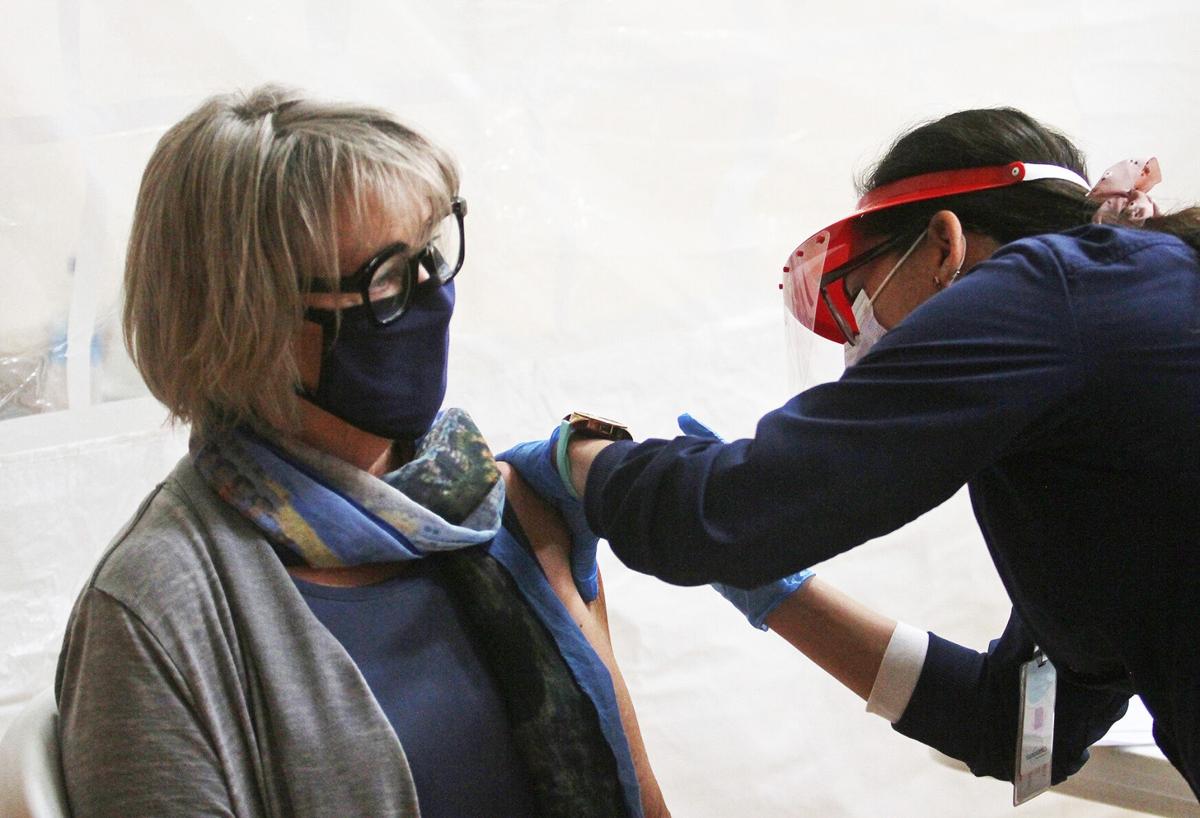 Karen Rumsey of Rio Rico receives a COVID-19 vaccine on Wednesday at the City of Nogales Recreation Department. Rumsey, a 69-year-old retired nurse from Kansas, recently contacted the county and offered her skills as a volunteer to help vaccinate others in the community. She was given the vaccine in advance of undertaking that duty. 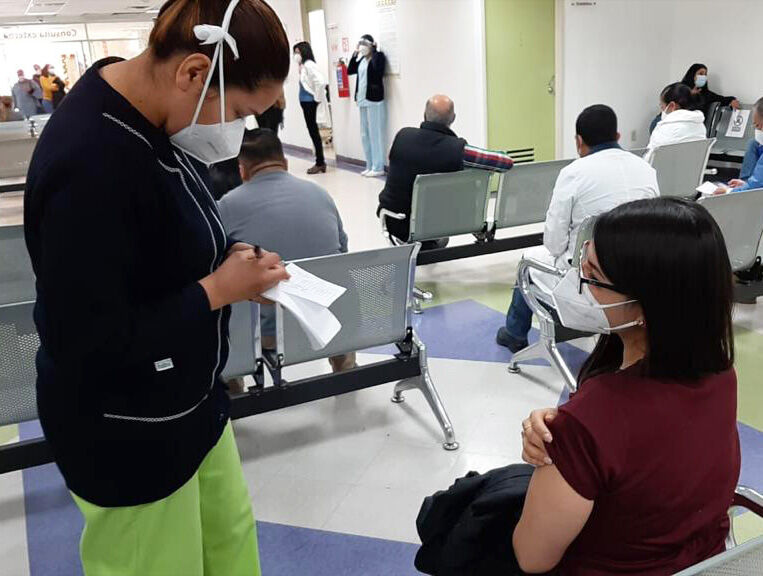 People wait their turn for a COVID-19 vaccination in Nogales, Sonora on Wednesday.

+2
We have lifted the paywall on this story. To support essential reporting, please consider becoming a subscriber.

The basketball court at the City of Nogales Recreation Center on Hohokam Drive, long closed due to the COVID-19 pandemic, was back in action on Wednesday as a makeshift vaccination clinic.

Patients signed in and went through a medical screening at the door. Next, they filled in paperwork at a row of desks near one end of the basketball court, then entered one of six tents set up on the sidelines to have a dose of the Moderna COVID-19 vaccine injected in their arm.

Following the procedure, the recipients sat in a waiting area at the opposite end of the court for 15 minutes as a precaution in case they had an adverse reaction to the shot.

The basketball-court clinic was part of an effort that saw vaccinations ramp up in Santa Cruz County this week, putting more doses in more arms and expanding the pool of eligible recipients to include anyone age 75 or older.

On Monday, the county had administered 771 vaccine doses, according to information published by the Arizona Department of Health Services. That was a rate of a little less than 40 inoculations per day since local vaccinations began on Dec. 22.

By Thursday, ADHS reported 1,445 doses administered in Santa Cruz County, where vaccine eligibility now includes people in Priority Group 1A (healthcare and emergency medical workers) and some members of Group 1B (law enforcement and people 75 and older).

“I think things are going really well,” said Dr. Eladio Pereira, the chief medical officer for Mariposa Community Health Center, which has been leading the vaccination effort in the county.

At a rate of 200 new vaccines per week, it would take years to vaccinate everyone in Santa Cruz County, which has a population of approximately 46,500.

There isn’t a shortage of local people willing to roll up their sleeves, according to Pereira: “Clearly, the demand for the vaccine is a lot higher than the supply at the moment and that’s a problem.”

“If we had more vaccine (doses),” Terrell said, “we could probably push more people through.”

As Pereira noted, the lack of supply is hardly limited to Santa Cruz County.

A challenge more specific to the local area is that federal law enforcement agents – including the scores of U.S. Customs and Border Protection officers and U.S. Border Patrol agents who work in Santa Cruz County – have been getting vaccinated here, but weren’t included in the numbers that Arizona used to calculate the county’s share of vaccines.

“We’ve reached out and they’re going to reevaluate that for the border counties down here. Cochise, Santa Cruz, as well as Yuma County,” Terrell said, referring to state authorities who determine vaccine allotments.

Still, it wasn’t clear if or when any additional vaccines would reach Nogales.

Among Arizona’s 15 counties, Santa Cruz is in the middle of the pack in terms of vaccines received per capita. ADHS data showed 1,900 vaccines had been allotted to the county through this week – roughly one for every 24 people. Maricopa and Pima counties had received nearly twice as many per capita, with Maricopa getting one dose per 12 people and Pima receiving one per 13 residents, based on the state’s vaccine numbers and U.S. Census Bureau population estimates.

Still, Pereira said that medical professionals and law enforcement officials who live in Pima County but work in Santa Cruz County are welcome to get their shot here.

“It’s in everybody’s interest to vaccinate the exposed, because, if not, we all get exposed,” he said.

Pereira added that the reverse is likely happening as well – community members who work in Tucson getting a vaccine at a Pima County site.

The jump in vaccinations this week came from a push to inoculate law enforcement officers on Tuesday and elderly residents beginning the next day.

Terrell said that about 200 people 75 or older were set to receive the vaccine in each of the last three days of this week. Of those, 100 would get the shot at the Recreation Center site and another 100 would go to MCHC each day.

The expanded eligibility, which the county announced via social media and email shortly after 8 p.m. on Monday night, led to a quick surge in demand.

“Immediately after we posted the phone number, as well as the email address, we started receiving calls. Unfortunately, we didn’t have a voicemail set up,” Terrell said.

But when staff were available at the phones at 8 a.m. the next morning, calls were coming in quickly. “It was nonstop, basically nonstop all day,” he said.

Terrell said the county scheduled the roughly 600 appointments for this week on a first-come, first-served basis. But that left out the 200 to 400 otherwise eligible people who contacted the department too late to get a vaccination this week.

Those people will be able to make a vaccination appointment when the next allotment arrives to the county, Terrell said. As of Thursday, that was expected to be next week, but he couldn’t confirm the number of doses expected.

It also wasn’t clear how eligible residents would sign up to be vaccinated in the future, or how and when they’d be notified to do it.

The county announced this week’s vaccination expansion and issued phone and email sign-up instructions without previous warning on Monday night. That was several hours after the NI’s Tuesday print edition went to press, so residents had to learn the news via electronic means. The messages also went out in English only.

Terrell acknowledged that the county was “probably a little bit behind” when it came to getting the word out this time, but said they would pursue a more wide-ranging notification strategy in the future that includes the newspaper, radio stations and TV.

ADHS has established an online registration system for vaccination sites around the state. But it’s still not clear if local residents will be able to use the state portal to register for future vaccinations, or if they’ll need to keep calling and emailing the County Health Services Department.

“We’re working towards using (the state) portal or a portal of some type online that people can register and get their appointments that way,” Terrell said, adding that he hoped such a system would be working by next week.

The 75-and-over age group was made eligible in Santa Cruz County and elsewhere in Arizona following a recommendation late last month from the Centers for Disease Control and state health authorities. Then, in a news release issued on Wednesday, the CDC and a state group recommended opening up vaccination to those over 65 beginning Jan. 19.

However, people 65 and older in Santa Cruz County will still have to wait; Terrell said on Thursday that the county would stick with the current eligibility guidelines for now.

As more people are added to the eligibility list, there may also be some increased demand from already eligible people who were initially skeptical about receiving the vaccine, but have become more confident as rollout has sped up across the country without significant medical problems.

“As the first group becomes vaccinated and people realize that it’s a safe vaccine, we get more and more people interested,” Pereira said.

So far just one person has had a reaction to a COVID-19 vaccine administered through MCHC, Pereira said, adding that the patient made a full recovery after being treated with medication.

Heath care workers in Nogales, Sonora began receiving COVID-19 vaccinations made by the Pfizer pharmaceutical company on Wednesday after the doses arrived in Sonora by plane the day before.

According to local media reports, 1,215 doses were delivered to the Social Security Institute (IMSS) hospital, 325 went to the city’s Hospital General and another 190 were earmarked for the ISSSTE clinic that largely serves government employees.

Armed National Guard members escorted the vaccine shipments to the respective hospitals, then stood watch as the doses were administered to the first recipients.