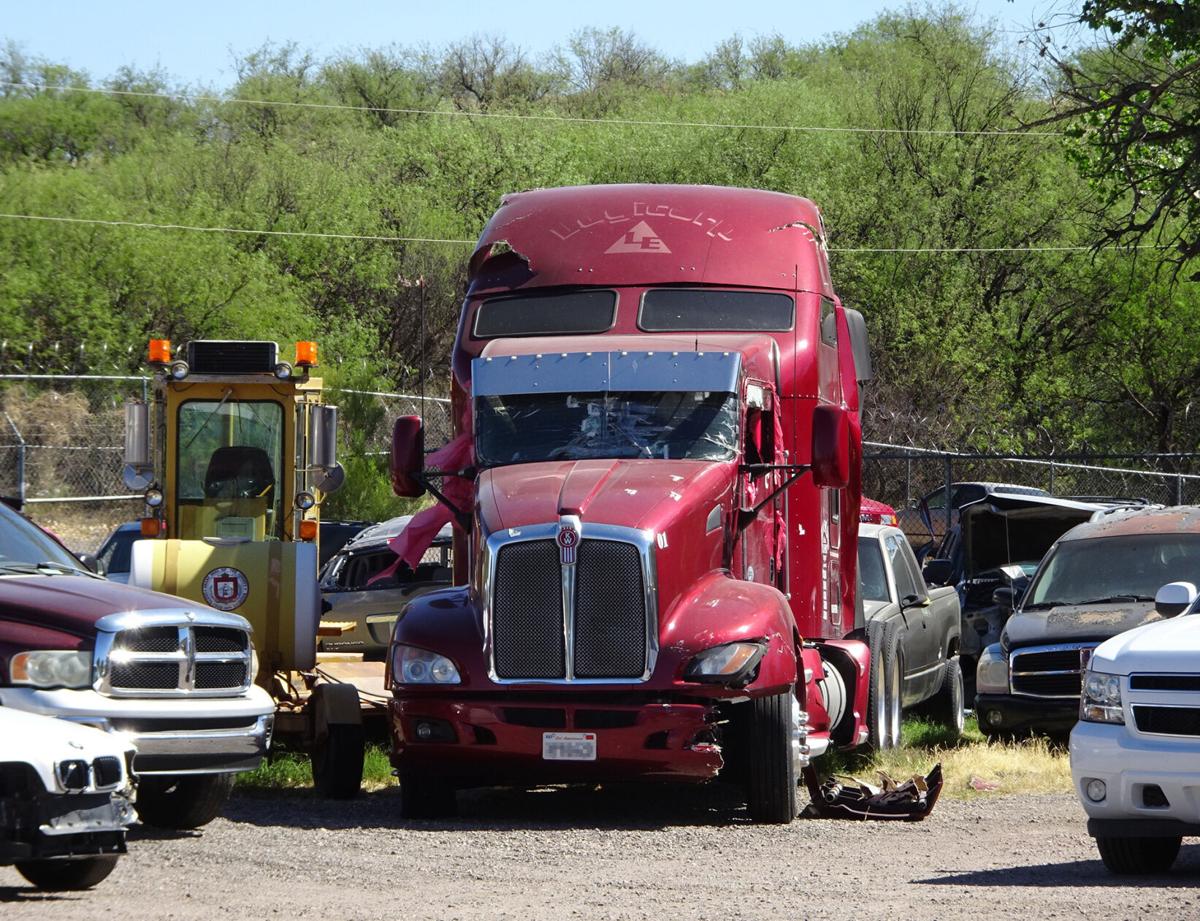 The semi-truck that John Moreno reportedly stole and used in a Christmas Day assault on a home and its occupants in Rio Rico, as well as a sheriff’s deputy and his patrol vehicle. 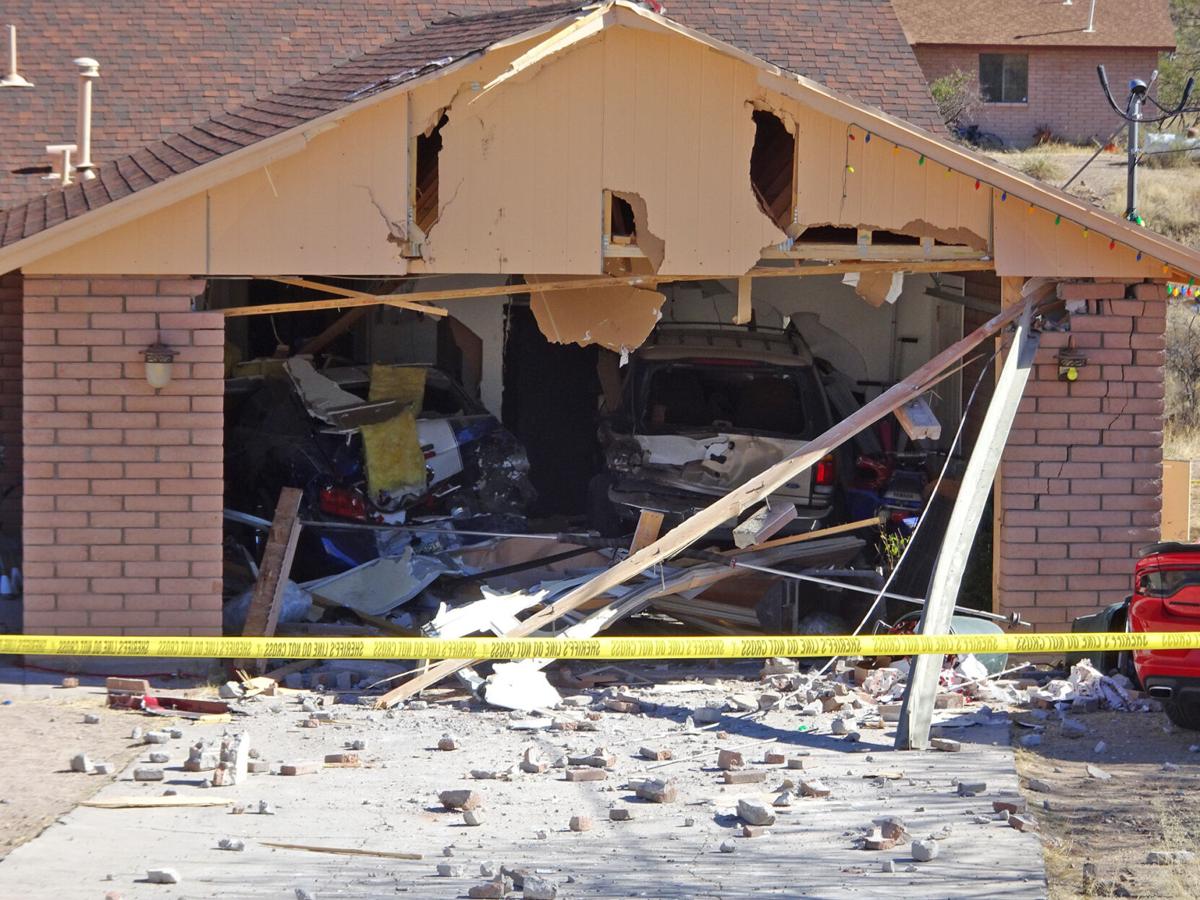 The suspect allegedly rammed a semi truck into this carport before turning his vehicle toward a sheriff’s patrol.

County Attorney George Silva has decided that no charges are warranted against the officer who shot and killed a man during a disturbance at a home in Rio Rico last Christmas Day.

Sgt. Omar Rodriguez of the Santa Cruz County Sheriff’s Office fatally shot 32-year-old John Moreno on Dec. 25, 2020 while responding to a 911 call reporting that a man, later identified as Moreno, was trying to break into a residence in Rio Rico.

The Pima County Sheriff’s Office led the investigation into the shooting, and in a letter dated April 9, Silva notified Sheriff David Hathaway that he had reviewed the findings and believed Rodriguez’s actions were warranted.

“Upon a thorough review of reports, witness reviews, audio recordings, photographs and other supporting materials, I find that the shooting was justified,” Silva wrote in the six-page letter, in which he summarized a portion of the evidence.

Authorities released only limited information following the shooting, citing the ongoing investigation. It took 11 days for the Sheriff’s Office to publicly identify Moreno, but even then the department declined to give additional information about him or the incident, including Moreno’s relationship to the people in the home that he reportedly assaulted.

Silva’s letter, dated April 9, fills in some of the missing information. He wrote that Moreno’s former girlfriend lived in the southeastern Rio Rico home, and that at an unspecified time prior to the incident, he had allegedly called her to threaten that he would go to her house and that she should be afraid.

Then on Christmas Day, Moreno drove a stolen red semi-truck, with no trailer attached, to the home, where his former girlfriend was with her three daughters and a daughter’s boyfriend. He demanded to be let inside the home and attempted to break in through the front door and a bedroom window without success.

At 5:15 p.m. that day, one of the people inside the home called the Santa Cruz County Sheriff’s Office to report that Moreno was trying to break in. The caller also said Moreno was armed, which turned out to be inaccurate.

Meanwhile, according to Silva’s summary, Moreno returned to the semi-truck, put it in reverse and proceeded to crash into the attached garage portion of the home, pushing two parked cars into the living room area and opening access into the house.

Moreno then entered the residence and confronted the occupants while searching for his ex-girlfriend. He also reportedly sprayed the people in the home with bear spray and broke a door with a hammer.

After having no luck finding his ex-girlfriend, he broke a front window, exited the home and returned to the semi-truck.

Sgt. Rodriguez, who happened to be nearby and on-duty at the same time, responded to the 911 call of an armed man trying to gain entry into a home. As he drove his vehicle with the lights and siren activated, Rodriguez reportedly observed the semi-truck crashing into the home.

“Upon observing the semi crashing into the home and believing a suspect at the location was armed, Sgt. Rodriguez readied his rifle as he drove,” Silva wrote.

Rodriguez said he parked his patrol vehicle at the edge of the road, some distance from the home’s driveway, and exited the car with the rifle in hand.

According to Silva’s summary, Rodriguez saw the semi-truck reverse out of the driveway, then head forward in his direction. Seeing that there was space beside him, Rodriguez believed that Moreno, who was behind the wheel inside the semi, would drive around him and flee the scene.

At this point in his letter, Silva switched from paraphrasing Rodriguez’s version of events to quoting him directly.

Rodriguez said he soon realized that Moreno was driving straight towards him and yelled at him repeatedly to stop. When Moreno didn’t pause, Rodriguez fired several rounds through the windshield, though without being able to aim well due to losing his balance on uneven ground.

He also said he thought he fired rounds through the vehicle’s right-side window or door.

As the semi-truck collided with his patrol vehicle, Rodriguez said, he walked towards the back of the semi on the driver’s side to try to get a better look at Moreno.

Moreno once again shifted into reverse past Rodriguez and then began to accelerate forward in the officer’s direction again, Rodriguez said.

“At that point I’m again thinking… ‘Why is this guy coming back? Why is he not going? He has the road. He can, he can leave,’” Rodriguez was quoted as saying.

As Moreno again accelerated in reverse, Rodriguez said, “I’m sweeping and I’m shooting at the driver’s side again.”

At one point, he said, he could see the driver’s head through his rifle’s scope. “The last thing I remember seeing,” he said, was “the dot (on) his head.” Then he took his final shot.

Moreno, he said, then slumped inside of the cabin and the semi kept rolling down the slope.

“My, my belief when I saw that truck accelerating towards me, that he wanted to hurt me, he wanted to kill me,” Rodriguez was quoted in the letter, adding that there was enough space in the road for Moreno to leave the scene.

The letter noted that an off-duty sheriff’s detective who lives across the street from the home where the incident occurred, as well as the detective’s wife, were witnesses to the event. So was an off-duty county probation officer, who lived nearby and reportedly had a view of the back of the home.

The detective and probation officer both reported hearing Rodriguez yell before firing his weapon, Silva wrote.

He also noted that some of the witnesses’ accounts showed inconsistencies with Rodriguez’s version.

Those discrepancies included the off-duty detective saying that he believed Moreno’s ramming of the patrol vehicle was continuous, and did not include backing up and accelerating forward each time. In addition, the detective and his wife both said they believed Rodriguez was inside his vehicle the first time Moreno rammed it with the semi.

Despite the differences, Silva wrote, according to both Rodriguez’s and the off-duty detective’s accounts, the shooting “occurred after Moreno intentionally drove at Sgt. Rodriguez in what appeared to be an attempt to run over Sgt. Rodriguez with the semi-tractor.”

Silva added that, in addition to reviewing the statements of witnesses, he also viewed photos of the scene, listened to 911 recordings and radio traffic, and participated in a walk-through of the crime scene on Dec. 25, 2020.

He said that Rodriguez was justified in firing both the first round of shots, considering that Moreno had ample room to drive around Rodriguez, that Moreno attempted to run over the officer, and that Moreno failed to follow Rodriguez’s commands to stop.

He added that Rodriguez was also justified in shooting the second round of shots because Moreno attempted to run him down a second time. What’s more, he said, Moreno had even more room to drive away and Rodriguez had reason to believe that Moreno was trying to hurt him or somebody inside the house.

“Because of my review and conclusions, no charges are warranted against Sgt. Omar Rodriguez for the December 25th shooting and killing of John Moreno,” Silva concluded.

Rodriguez was hired by the Santa Cruz County Sheriff’s Office as a deputy in September of 2006 and was promoted to sergeant in September 2014. He was put on administrative leave following the shooting, and returned to duty on Feb. 11, according to Lt. Gerardo Castillo.

One type of evidence that Silva did not cite as part of the investigation was body-camera video, which has become increasingly significant nationwide as a source of impartial evidence in cases of police shootings.

Asked if he had considered implementing a body camera program, Hathaway, who took office at the start of this year, said the issue had already been discussed in the previous administration.

“(B)body cameras were looked into in the past with this agency and the cost was prohibitive for the storage and preservation of video,” Hathaway said, adding: “I am open to being briefed on all available technology and associated logistical issues that may help to promote transparency in our operations.”

The Nogales Police Department announced in early 2019 that it was preparing to implement a body camera program, funded partially by a federal grant, but NPD Chief Roy Bermudez put the effort on hold later in the year, saying he wanted to wait until he could be sure that the plan was financially “viable.”

Shootings of civilians by local and state law enforcement are rare in Santa Cruz County, and the fatal shooting of Moreno was the first such case involving local police in more than a decade. An Arizona Republic investigation that catalogued 600 police shootings throughout the state between 2011 and 2018 found that Santa Cruz was the only one of the state’s 15 counties that did not have a local police shooting during the period.

Shootings of civilians by federal law enforcement officers are more common in the county.