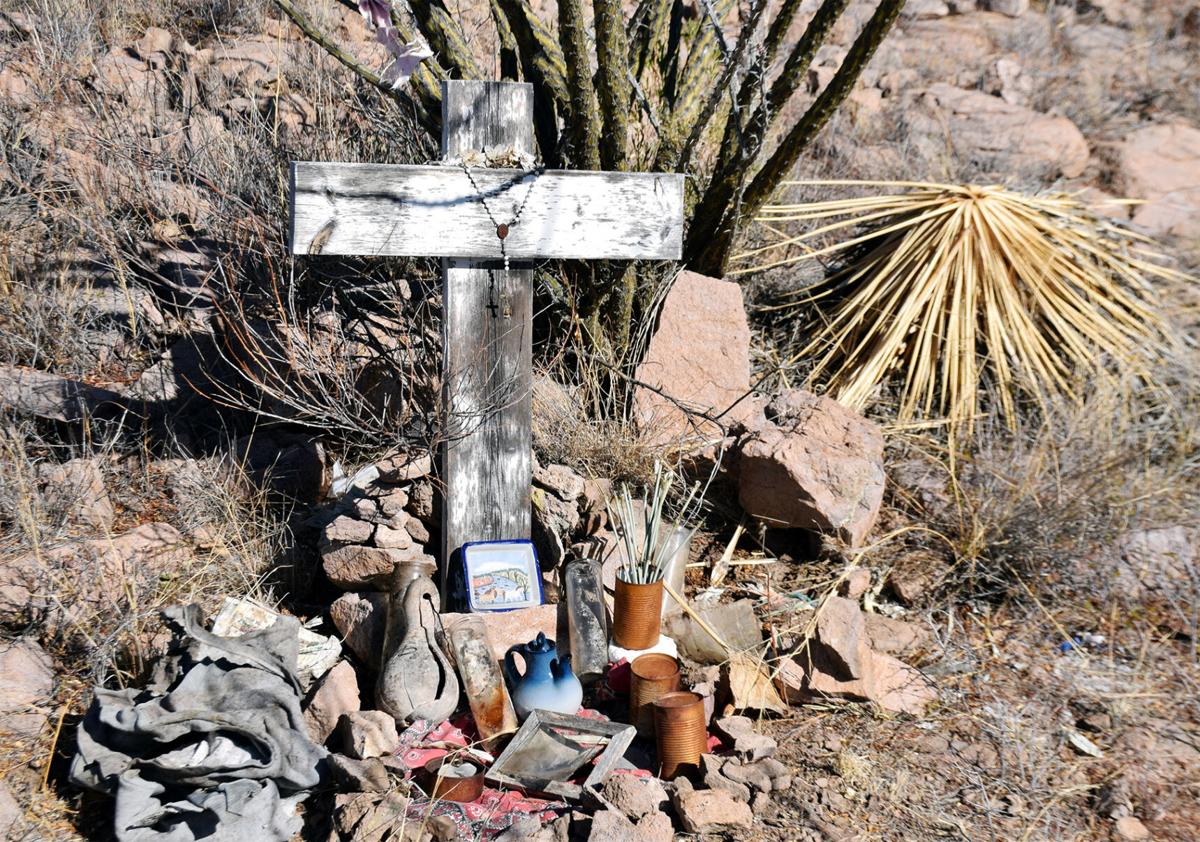 This cross commemorates four migrants who died in a remote area of the Tumacacori Mountains in 2009. Migrant deaths increased in Santa Cruz County this year, as did the number of 911 calls to the Sheriff’s Office from border-crossers in distress.

Earlier this year, deputies with the Santa Cruz County Sheriff’s Office set out for Forest Service Road 39 alongside U.S. Border Patrol agents to conduct a search and rescue mission for an undocumented migrant who had reported being injured and lost in the desert west of Nogales.

After locating the caller in a remote area near the U.S.-Mexico border, the responding authorities then had to work on getting the man, who couldn’t walk due to his injuries, out of the desert and into proper care.

“Our deputies took turns with Border Patrol, carrying the person out of the area, and basically that was the only means of extraction during that call,” said Sheriff’s Sgt. Santiago Gonzales. “But there’s stories like that on a monthly, if not on a weekly basis, of us working with Border Patrol to rescue these people.”

Data provided by the Sheriff’s Office shows calls related to undocumented foreign nationals increasing over the past three years, with a sharp jump occurring in 2020.

The number of migrants found dead in the county also spiked during the past year, according to records kept by a humanitarian organization working in partnership with the Pima County Medical Examiner’s Office.

In 2018, the Sheriff’s Office reported six search and rescue (SAR) missions and 105 referrals, the latter number representing undocumented migrants who were apprehended and referred to the Border Patrol. The following year, those numbers jumped to 17 SAR missions and 128 referrals.

As of Dec. 19, the Sheriff’s Office had conducted three times as many SAR missions in 2020, for a total of 51. Referrals showed a similar increase, rising to 355 in continuance of a trend reported on by the NI in August.

Of the 14 deaths confirmed in 2020, only one had possibly occurred the previous year; skeletal remains that were found in July about a mile west of Nogales showed six- to eight-month decomposition. In seven cases, the medical examiner listed the cause of death as hyperthermia or probable hyperthermia – excessive body temperature, usually caused by the weather.

Another five had an undetermined cause of death due to the condition of the bodies. One was a young woman who was crushed by a train in Nogales in March, and another, a 25-year-old man, died of multiple gunshot wounds from a Border Patrol agent in September, reportedly after stabbing the agent.

All of the bodies or remains were recovered between the months of March and October.

“Our concerns are that more people are dying. We’re seeing higher numbers of people dying this past year and in the numbers of people reported missing who may never be found,” said Sarah Roberts, a medical volunteer with the Tucson Samaritans, a nonprofit that sets out water stations in the desert for migrants.

“We don’t really know the number of people who are dying because some people are never found,” she added.

In six of the 51 SAR missions that the Santa Cruz County Sheriff’s Office conducted in 2020 through Dec. 19, the missing party was not found. Those cases were then referred to the Border Patrol.

In many cases, dispatchers can use cell phone data to plot a distressed caller’s geographic location. Even so, Sgt. Gonzales of the Sheriff’s Office said the accuracy of plotting migrants’ GPS coordinates can vary from call to call, with differences ranging from a five-meter radius to a 1,000-meter radius.

He added that the Sheriff’s Office often seeks help from the Border Patrol, U.S. Forest Service and Arizona Department of Public Safety while searching for lost migrants.

“Border Patrol is the expert in remote terrains (and) they’re very familiar with the area,” Gonzales said, adding that “just based on their description and the information that’s provided by the migrant, a lot of times the Border Patrol has a general idea of where they’re at.”

What's behind the increases?

While the number of apprehensions by Border Patrol agents along the entire U.S.-Mexico border decreased sharply in fiscal year 2020 compared to 2019, apprehensions were up in the Tucson Sector, which includes Santa Cruz County and most of Arizona’s border with Sonora.

The sector increase in FY 2020, which ended on Sept. 30, was only 4 percent overall. However, the numbers were way up during the summer months, with apprehensions increasing by 36 percent in July, 66 percent in August and 71 percent in September in the Tucson Sector.

The trend continued in October and November, with the number of apprehensions nearly doubling those from the same months in 2019.

The rise in apprehensions, which suggest an increase in the overall number of people crossing the border illegally, coincided with a season of record-breaking heat. National Weather Service data from the Nogales International Airport showed 57 days of triple-digit temperatures in 2020, up from 19 in 2019. The average high temperatures in July and August at the airport were the hottest recorded in the 20 years for which data was available.

“I know that weather is always an issue. Summers keep getting hotter and hotter, and a lot of times, people underestimate the elements,” Gonzales said, adding that migrants may be more inclined to ask for help once they’re out in extreme weather for several days.

These days, he said, more migrants have begun carrying cellphones while crossing through the desert, making it easier to call for help when in distress.

Gonzales also noted that, in light of the COVID-19 pandemic, the Border Patrol has been immediately releasing undocumented migrants back into Mexico under a program called Title 42, rather than holding them in detention centers like they did in the past.

“If you’re going to risk coming across and you know you’re not going to spend a few days or weeks at a detention center, and they’re just going to put you back into Mexico, perhaps you might be more willing to come across,” he said.

Roberts of the Tucson Samaritans also believed that U.S. Customs and Border Protection policies have had an effect on the rise in migrants crossing the border and putting themselves at risk.

She said that when CBP stopped processing cases of migrants seeking asylum at U.S. ports, many of those individuals felt the need to take more desperate measures as they attempted to flee violence and persecution in their home countries.

“People can’t walk to the ports of entry and present themselves and ask for asylum,” she said. “And so that’s one thing, I think they’re forced to cross through the desert, and that leads to more people who are reported missing and more deaths.”

The Border Patrol did not respond to specific questions about Gonzales’ and Roberts’ speculations about the effects that government policies have had on migrant traffic in the area.

Instead, spokesman John Mennell said that undocumented migrants are often lured by human smugglers’ false promises that their trek through the desert will be safe.

He added that, to help those lost in the desert, the Border Patrol has placed rescue beacons in remote areas for individuals to call for help and has a specialized rescue team that is deployed to areas where migrants are often found in distress.

“We definitely respond and work with them. It doesn’t matter where somebody is, we have to go out there and do everything we can to rescue them,” he said.