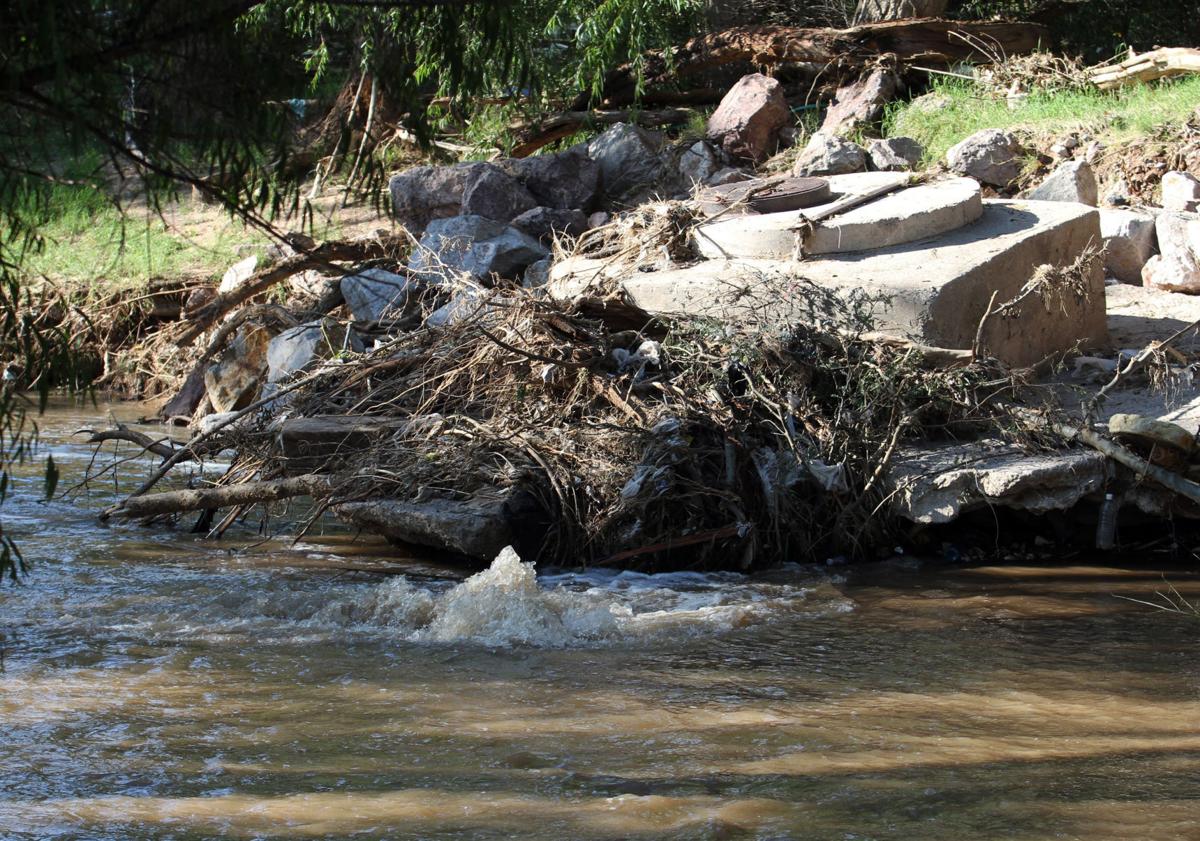 Sewage from the International Outfall Interceptor bubbles up into Potrero Creek near Old Tucson Road on Tuesday afternoon as the result of a break at Manhole 89, seen above. 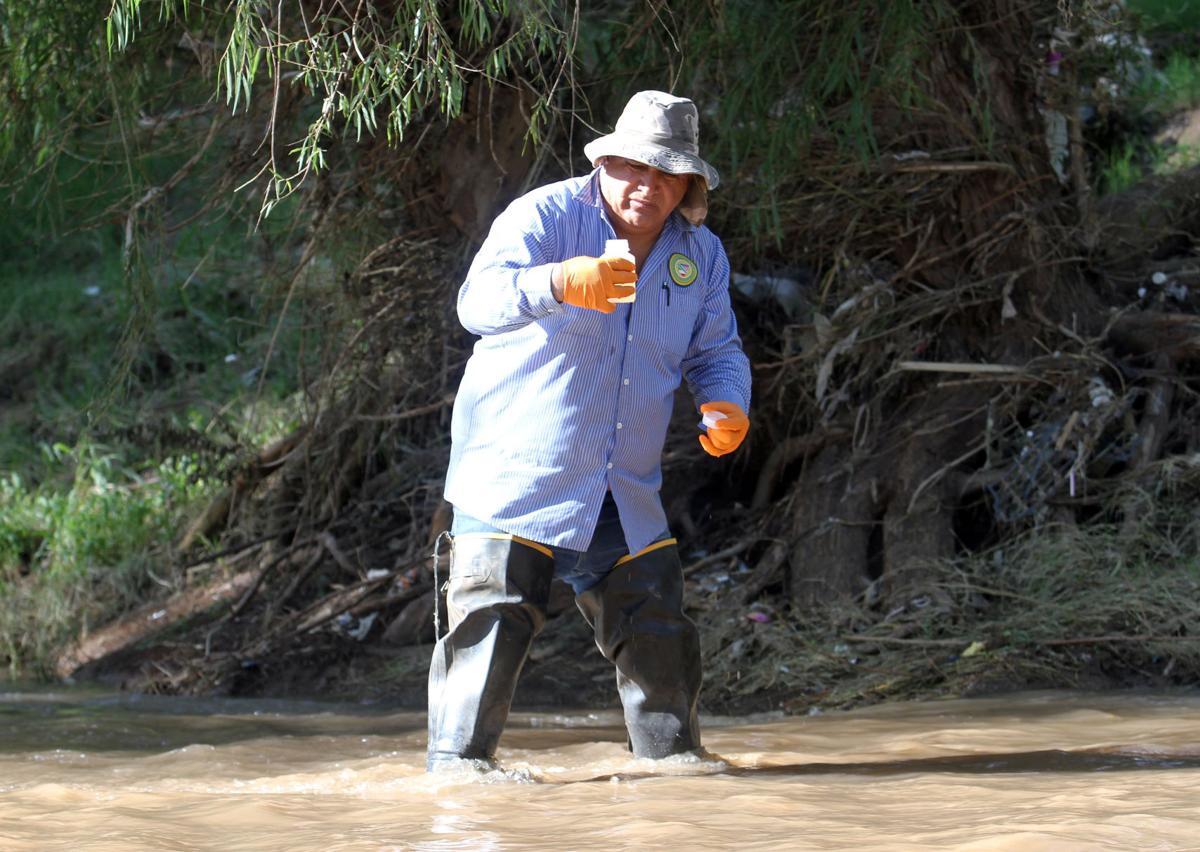 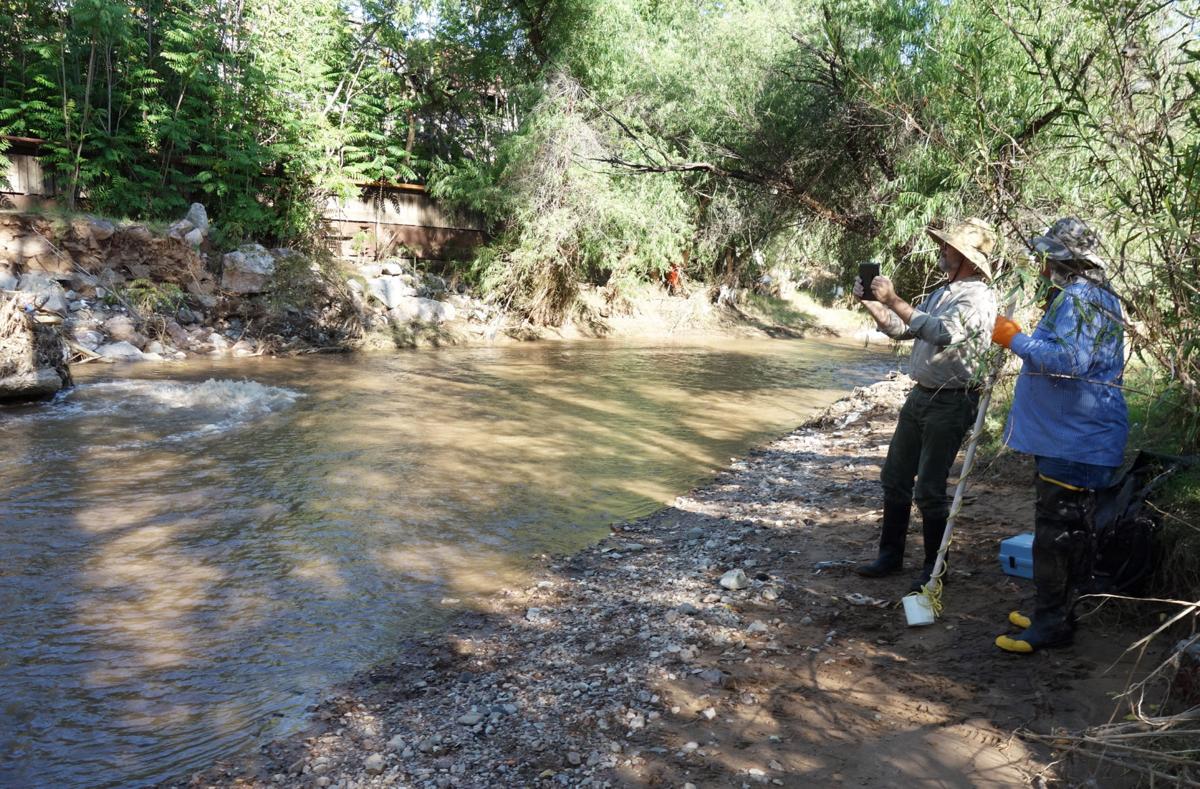 ADEQ hydrologist Hans Huth and Daniel Arizmendi, pre-treatment supervisor for the City of Nogales, record the scene of the sewage leak Tuesday afternoon. 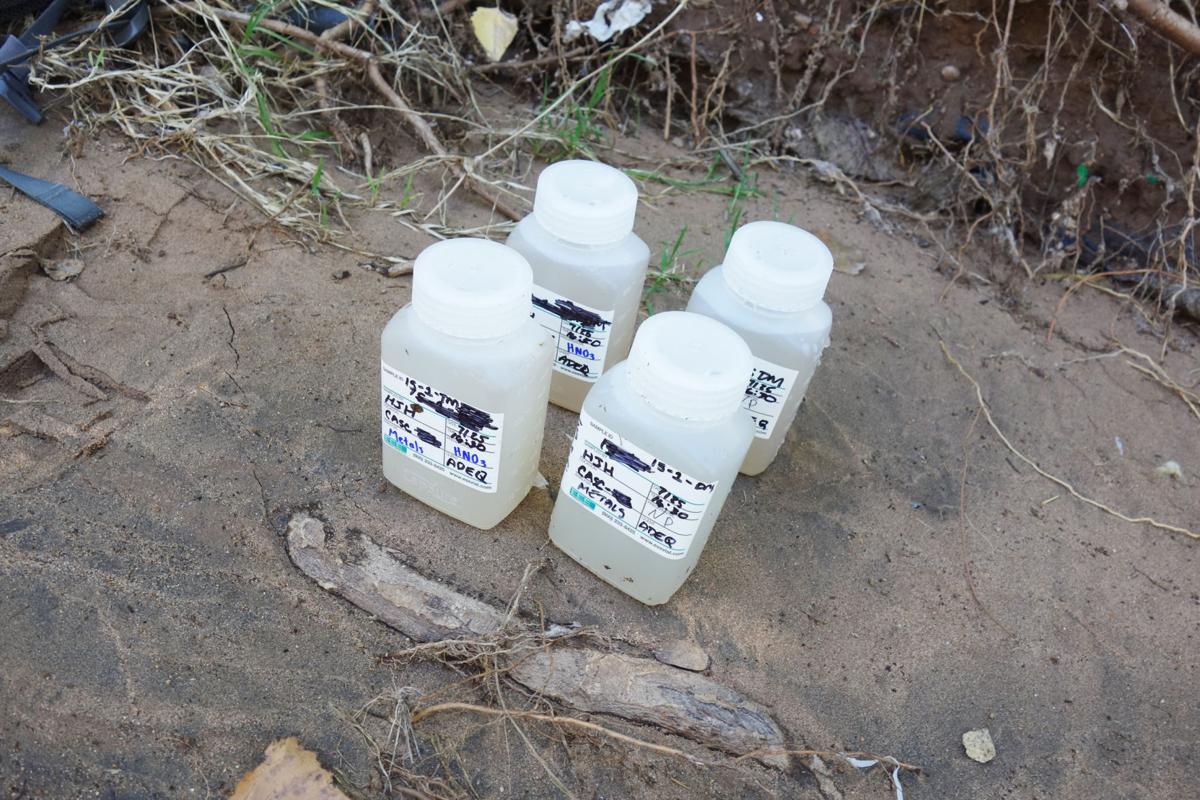 Water samples collected at the scene Tuesday by ADEQ hydrologist Hans Huth and Daniel Arizmendi, pre-treatment supervisor for the City of Nogales. 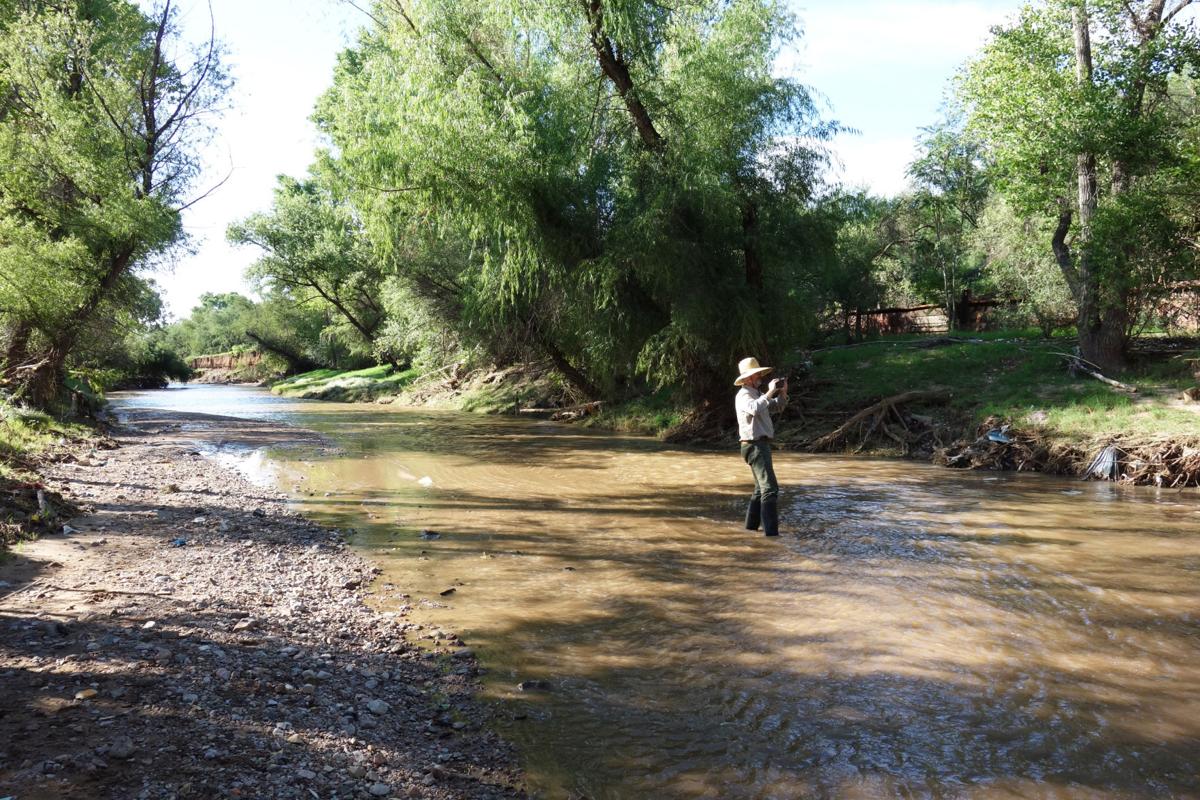 Sewage from the International Outfall Interceptor bubbles up into Potrero Creek near Old Tucson Road on Tuesday afternoon as the result of a break at Manhole 89, seen above.

ADEQ hydrologist Hans Huth and Daniel Arizmendi, pre-treatment supervisor for the City of Nogales, record the scene of the sewage leak Tuesday afternoon.

Water samples collected at the scene Tuesday by ADEQ hydrologist Hans Huth and Daniel Arizmendi, pre-treatment supervisor for the City of Nogales.

Untreated wastewater is pouring into Potrero Creek after a cross-border pipeline that carries millions of gallons of raw sewage and runoff each day ruptured north of Nogales city limits.

Late Tuesday afternoon, sewage from the broken line could be seen bubbling up into the north-flowing creek on one side of the raised manhole, as well as pouring down into the water from a rocky bank on the other side. A hydrologist from the Arizona Department of Environmental Quality (ADEQ) and city employee were taking water samples at the scene, but there was no repair effort underway.

“It’s a constant flow of 25 CFM (cubic feet per minute) of water flowing through it right now,” Rivera said. “To actually get in there and do anything is beyond the city’s capabilities. There needs to be dewatering, pump-around, engineering – we’re looking at a significant expense that is beyond the city.”

“The fix is, you have to stop 13 million gallons of sewage every day, somehow stop it or pump it around,” added Deputy City Manager John Kissinger, noting that repair is “not an easy task when the wash is flowing and has the potential of flooding – which they said is predicted to happen this weekend.”

As for health concerns, Rivera said the results of ADEQ’s sampling would be available “tomorrow or so.” The city water system is not affected by the break, he said, but he encouraged people with private wells along the IOI to contact the Santa Cruz County Health Department for more information.

“When we were out there, it’s hard to quantify, it isn’t solid fecal matter that’s coming out,” he said. “That could be a plus. If it’s all liquid and it’s being diluted, the next storm hits, that should be so diluted that it should be a minimal problem.”

The sewer line, known as the International Outfall Interceptor, carries wastewater from Nogales, Sonora and Nogales, Ariz. northward to the Nogales International Wastewater Treatment Plant in Rico Rico, a little more than a mile north of the line break. Potrero Creek, which is fed by the Nogales Wash, also flows northward to the plant, where it meets the north-flowing Santa Cruz River.

Maintenance of the sewer line is the shared responsibility of the City of Nogales and U.S. section of the International Boundary and Water Commission (IBWC) as the result of an arrangement dating to 1953.

City officials sent a letter to the IBWC on Monday in regard to emergency repairs to a section of the IOI in the Nogales Wash along Hohokam Drive that became exposed – but did not break – as a result of recent erosion. A formal request for assistance to repair the broken line north of city limits is pending.

Kissinger said the city hasn’t received a response from the IBWC, but the agency is aware of the problem at Manhole 89 and its personnel has been at the scene.

“Everything was discussed, but without one of the key players there it’s kind of hard to get anything done,” he said.

City Attorney Jose Luis Machado is now drafting an emergency declaration that includes the IOI damage along Hohokam Drive as well as at Manhole 89, Rivera said.

“Once that is prepared, basically letting the county know and the state know that it’s beyond our means, it will go to the county, the county will have to declare an emergency and that will be sent to the state,” he said.

A spokeswoman for the IBWC did not immediately return messages seeking comment, and an ADEQ spokeswoman referred questions to the Arizona Department of Emergency and Military Affairs (DEMA), the lead state agency assigned to the incident.

DEMA Spokesman Wes Parrell, who was en route to the area Tuesday afternoon along with a community liaison officer, called the situation “very fluid and very new.”

Santa Cruz County Health Services has established a hotline for public inquiries at (520) 375-7784 and said updates will also be posted on the county’s Facebook page, Twitter feed (@santacruzaz) and at santacruzcountyaz.gov.

The city wants Gov. Doug Ducey to “make available any and all assistance that may be available to meet this emergency.”