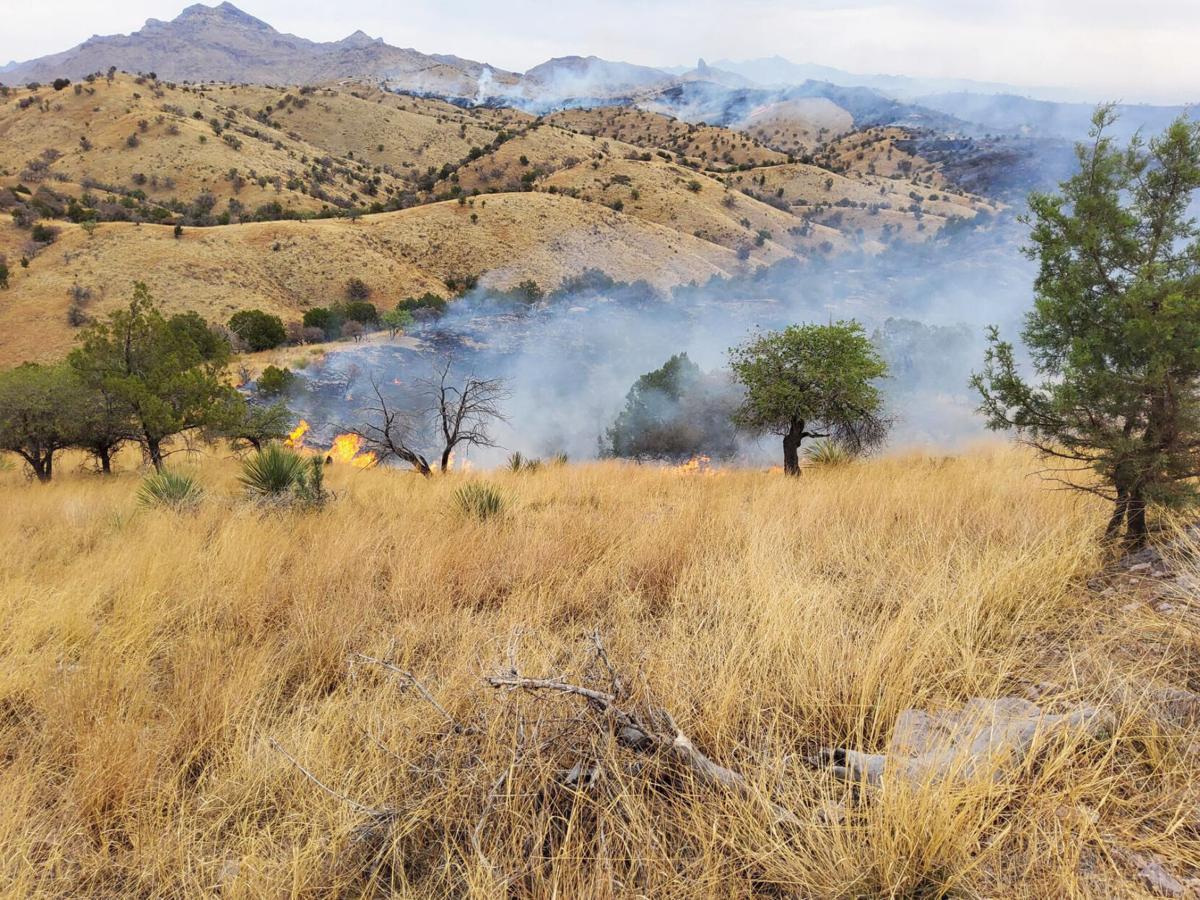 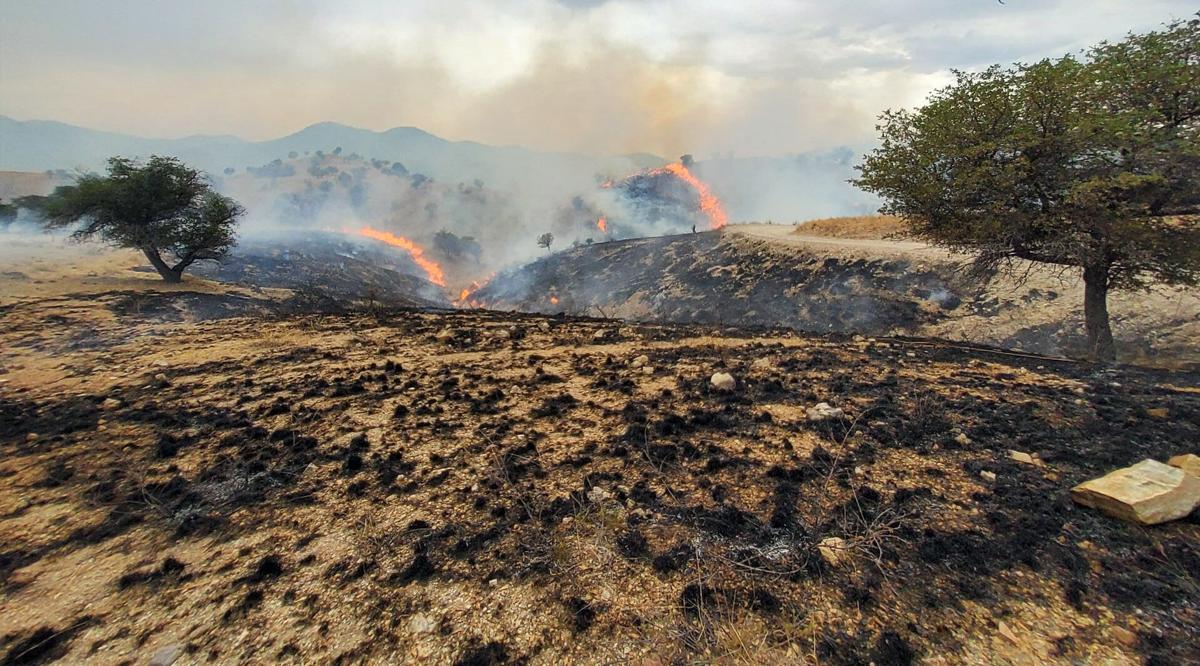 The Alamo Fire burns west of Nogales on Tuesday. 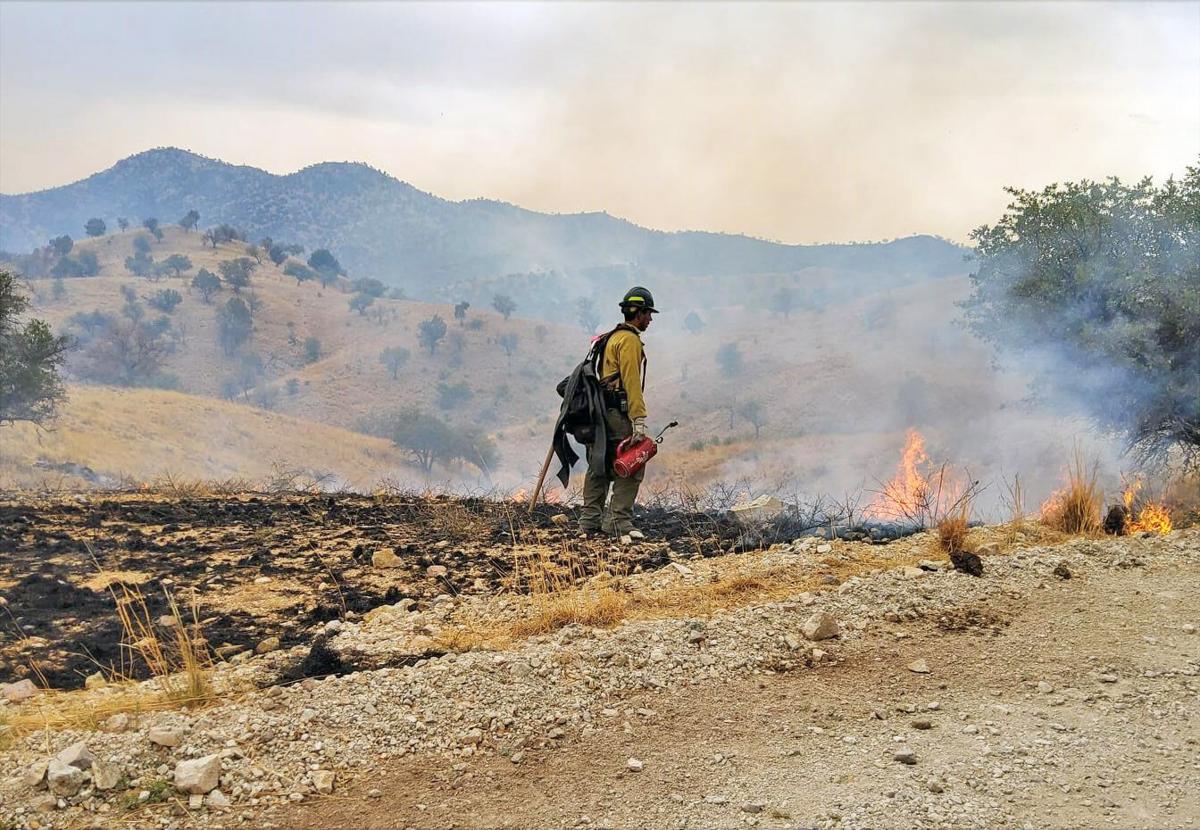 A firefighter battles the Alamo Fire. 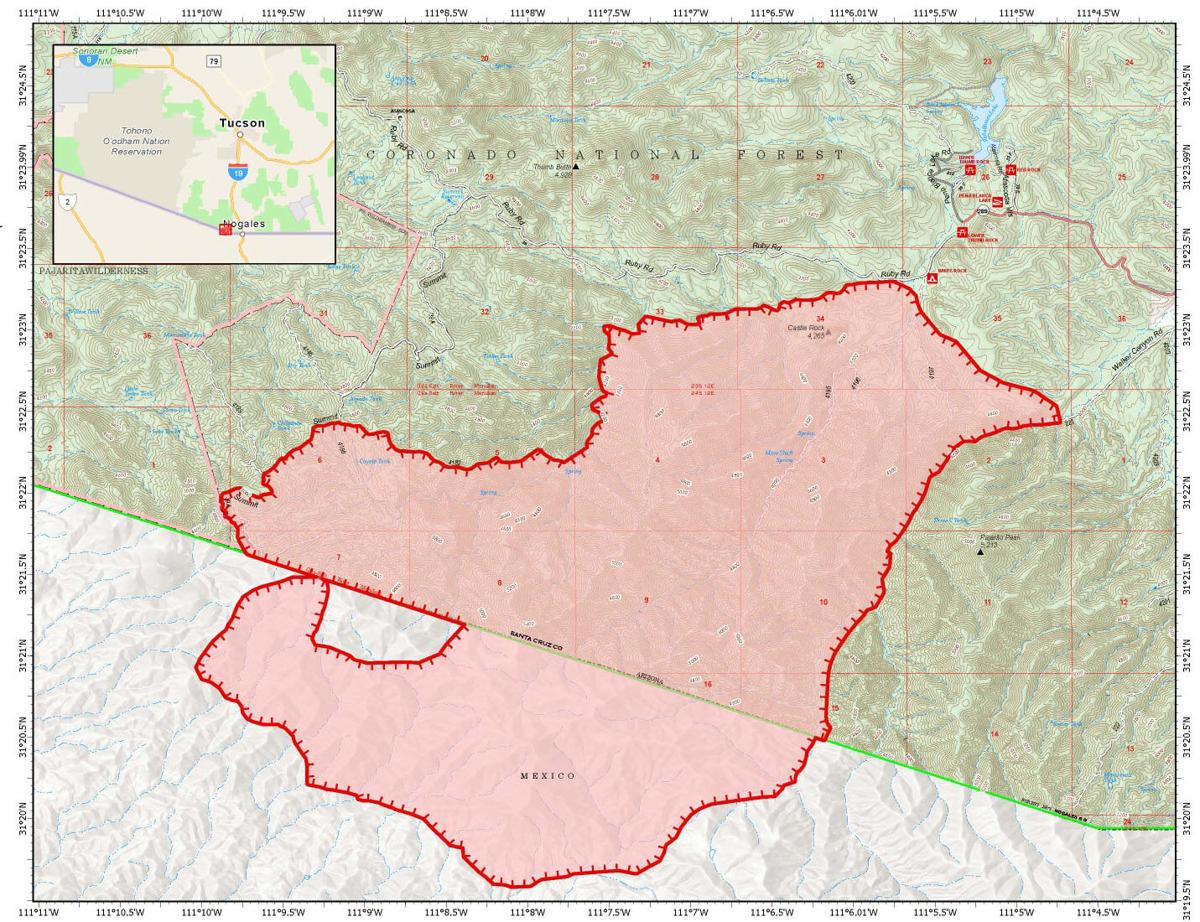 This map shows the area affected by the Alamo Fire as of 5 p.m. on Tuesday. 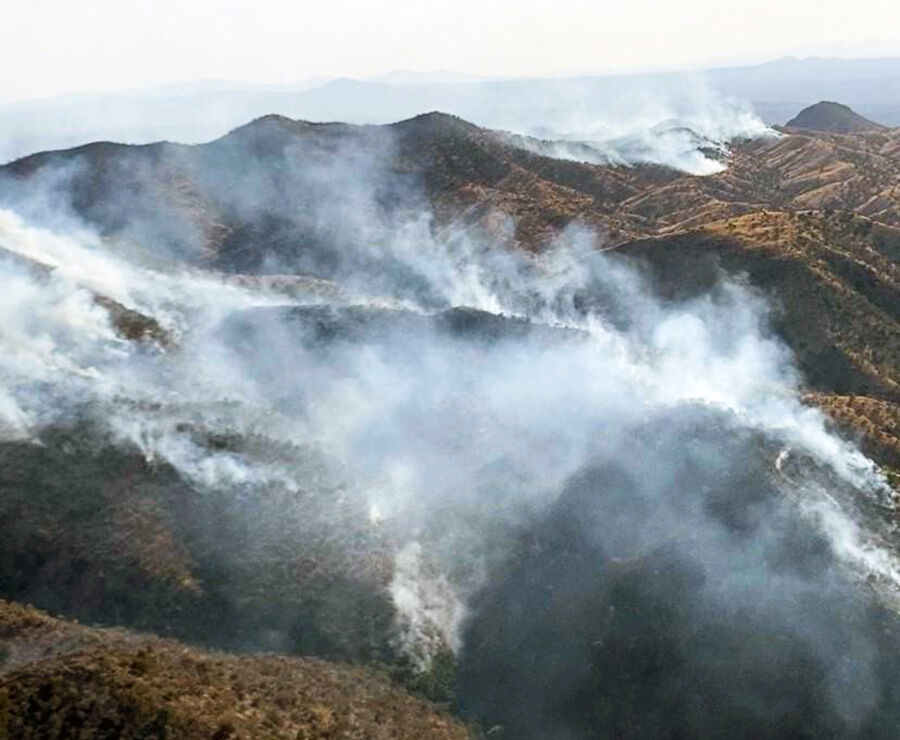 The Alamo Fire burns on Monday in the mountains west of Nogales. 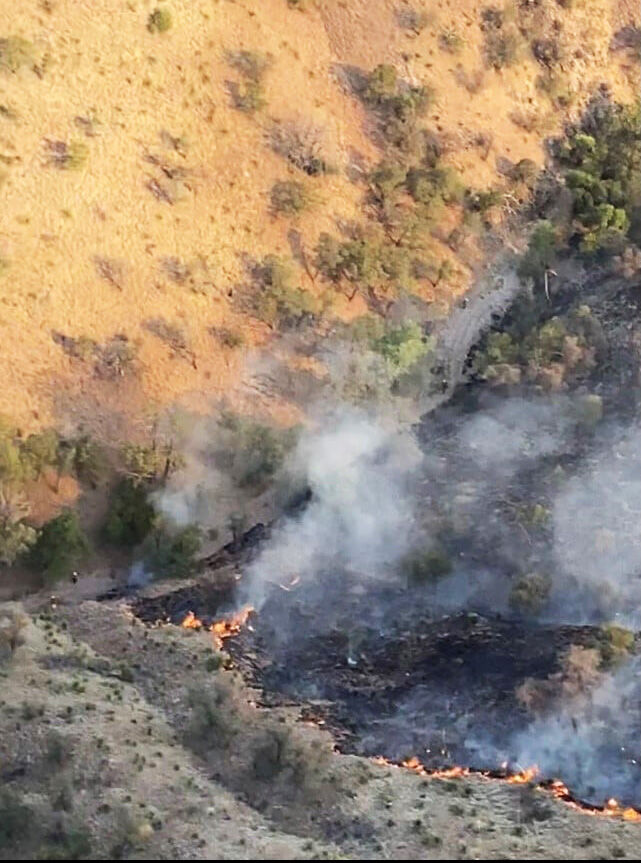 The Alamo Fire burns at the bottom of a steep canyon. 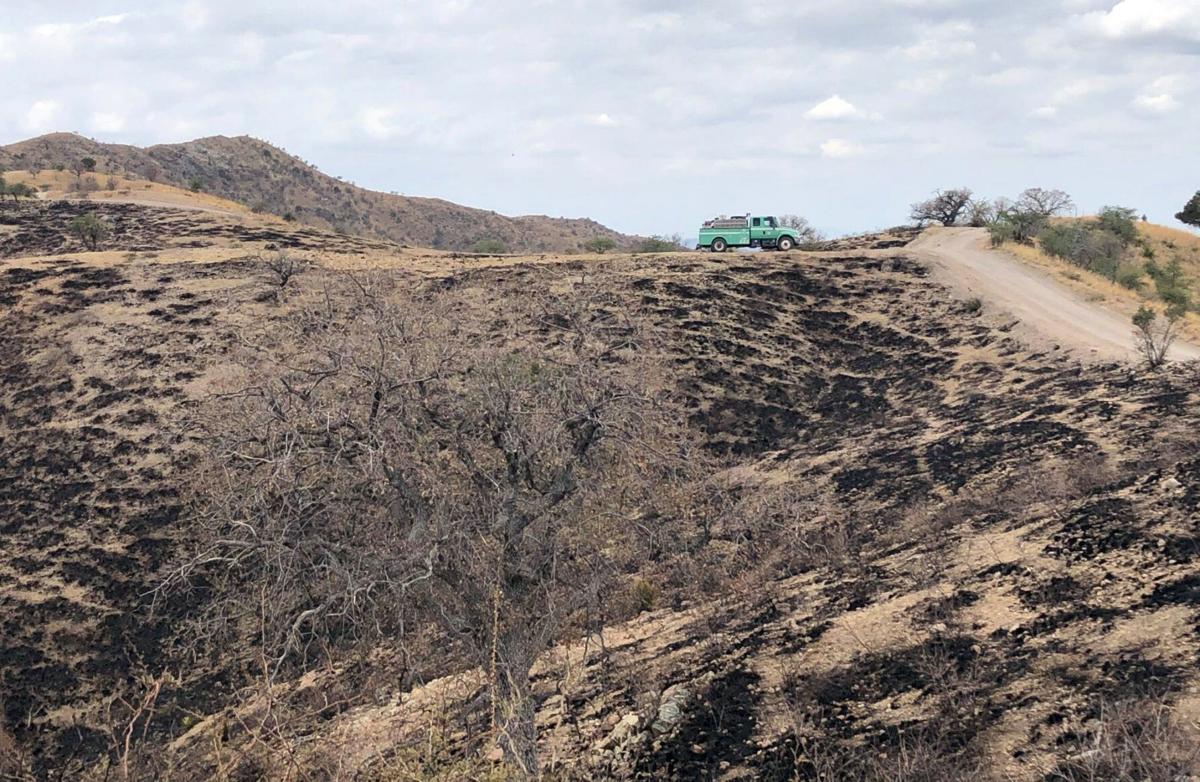 A Forest Service fire engine is seen here amid an area scorched by the Alamo Fire. 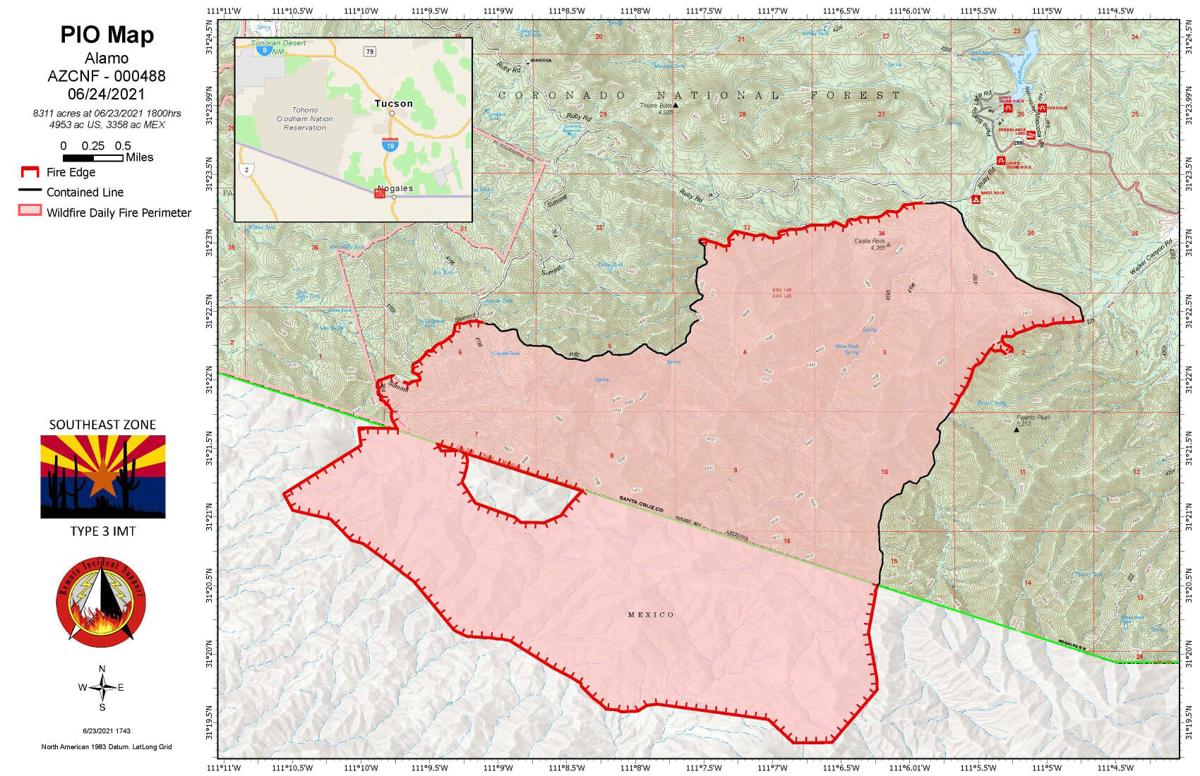 The Alamo Fire burns west of Nogales on Tuesday.

This map shows the area affected by the Alamo Fire as of 5 p.m. on Tuesday.

The Alamo Fire burns at the bottom of a steep canyon.

A Forest Service fire engine is seen here amid an area scorched by the Alamo Fire.

The Alamo Fire, burning in a remote area west of Nogales this week, was 80-percent contained by Thursday evening after scorching an estimated 8,311 acres on both sides of the U.S.-Mexico border.

“Minimal fire activity occurred today on the Alamo Fire,” the Coronado National Forest said in a report released Thursday evening, echoing an assessment released 24 hours earlier, adding: “Some smoke may be observed from some minor torching of the fuels remaining inside the green islands left within the fire perimeter.”

The blaze was first reported at around 1 p.m. on Sunday in steep, rugged terrain approximately 10-12 miles west of Nogales. Here’s how the fire and the effort to contain it progressed from there:

In its first full report on the Alamo Fire issued Monday evening, the CNF estimated its total size at 4,344 acres – 2,000 in Mexico and 2,344 in the United States.

The U.S. firefighting effort on Monday put “major emphasis” on Walker and Peña Blanca canyons to prevent the fire from spreading east, and crews in Walker Canyon began a burnout operation starting from the border.

As the fire grew that day, crews used a bulldozer to open an old dozerline to keep the fire away from a ranch headquarters. Containment was listed at zero percent.

U.S. resources dedicated to the fire included 74 personnel, nine engines, two helicopters, two water tenders, a bulldozer and a grader. (The number of personnel grew to 92 on Tuesday and was listed at 85 on Wednesday.)

The firefighting team in Mexico included 27 personnel from the Defense Department (Sedena), 15 from the Forest Service (Conafor) and 18 Nogales Rural Brigade.

The estimated size of the fire grew to 7,501 acres – 4,953 in the United States and 2,548 in Mexico. Containment was still listed at zero percent by the end of the day.

U.S. crews working the east side of the blaze completed burnout operations in Walker, Peña Blanca and Alamo canyons. By Tuesday evening, the CNF was reporting that no structures had been damaged or were under threat, and that there were no fire-related closures or evacuations.

“Towards the end of the afternoon, Walker Canyon did experience a spot fire on the eastern side of the canyon,” the CNF said. “Firefighters and air resources were able to contain the spot fire at four acres.”

On the west side, crews monitoring the fire’s activity in Mexico from the Summit Motorway (Forest Road 39A) saw the fire cross to the U.S. side of the border, but were able to stop its forward progress.

The Tuesday evening report also offered an update on the firefighting effort on the Mexican side of the border:

“They have started mop up on the eastern portion of the fire in Mexico and are moving westerly to gain control of the fire’s edge,” it said, adding: “The fire resources from both countries are working together to contain the fire.”

Smoke from the fire became especially heavy in Nogales during the early and middle parts of the day on Tuesday.

The CNF described the fire’s activity that day as “burning with low to moderate intensity in a mosaic pattern. Currently, smoke is dissipating within a few miles of the incident, but there may be an increase in smoke production over the next couple of days.”

By the end of Wednesday, the Coronado National Forest said, the fire had burned approximately 4,953 acres of CNF land and another 3,358 acres in Mexico. The estimated size of the fire on the U.S. side remained unchanged from Tuesday, while the acreage in Mexico increased from 2,000 acres the day before.

“Today, firefighters worked to mop up and secure containment lines around the fire perimeter,” the CNF said in its Wednesday evening report, which listed containment at 60 percent.

Meanwhile, Mexican crews were working to engage the fire on its west side.

That afternoon, the fire received some moisture when rain showers passed through the area.

The fire’s acreage didn’t change in the daily report issued Thursday evening, holding steady at 8,311 total acres on both sides of the border. However, containment of the fire was upgraded to 80 percent.

“Firefighters continued mop up, monitor, and patrol containment lines around the fire perimeter,” the report said of Thursday’s activities. “Resources began suppression repair of dozer lines, which consists of installing water bars for erosion control and pulling in the berms.”

Also on Thursday, a nine-member wildfire crew from Mexico took up a position on the southwest flank of the fire in an effort to contain it there. Due to access issues on the Mexican side, the crew entered the U.S. at Nogales, then hiked back into Mexico at the scene of the fire.