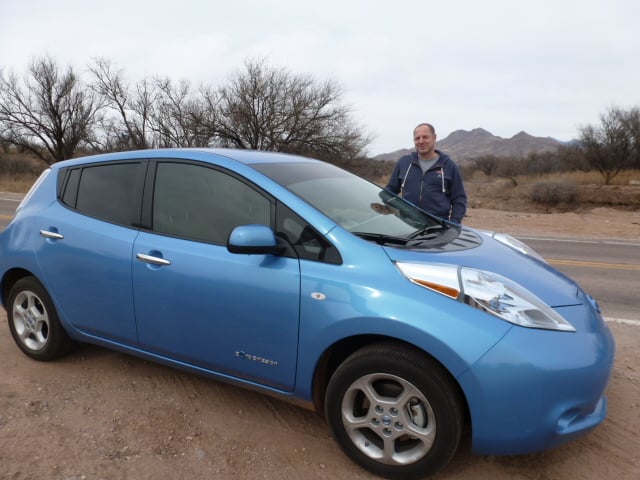 Josh Landess has been driving a Nissan Leaf electric vehicle since September. 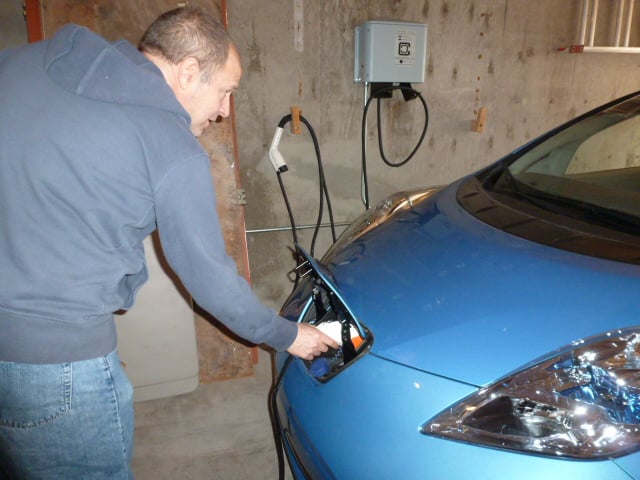 Josh Landess plugs in a cord to the front of his electric vehicle to start recharging it.

Josh Landess has been driving a Nissan Leaf electric vehicle since September.

Josh Landess plugs in a cord to the front of his electric vehicle to start recharging it.

Electric vehicles will save significant money on gas and can help keep the air clean, but before they become commonplace, there are hurdles to overcome.

There isn’t a single commercial charging station south of Sahuarita. Individuals can charge their electric cars at home but that takes four hours or more, said Josh Landess of Rio Rico, an EV owner.

Using a commercial station, which is more powerful, a person can recharge for a cost of about $1.50 per half hour.

Electric vehicles can’t travel as far as gas-powered cars so that becomes an obstacle for Santa Cruz county residents who live 25 to 50 miles from the nearest commercial charging station.

A study session open to the public is planned Wednesday, Feb. 27, at 1:30 p.m. at the Santa Cruz County Board of Supervisors meeting room to learn more about this new transportation option.

Since September, Landess has been driving a 2012 Nissan Leaf which he operates on a lease.

“This car is properly viewed as an around-town car,” Landess said. By that he means Rio Rico, Nogales, and Tubac. “If I drive to the north side of Tucson, it takes me too long in this car. If I need to go to Oro Valley there are definite time limitations. I have to recharge it, and to maximize your efficiency you want to drive a bit slower than normal.”

He frequently uses the charging station in the parking lot of Fry’s supermarket in Sahuarita if he’s traveling to or from Tucson areas.

Individuals who purchase an electric vehicle will also likely need to buy a 240-volt home charging dock and may need a licensed electrician to do the installation. With that type of dock, electric car manufacturer Nissan (Leaf) says it takes about four hours to go from depleted or empty to a full charge.

For emergencies, an electric vehicle can be charged with a special 110-volt charger that plugs into any regular outlet but the recharge proceeds more slowly.

Landess, a consultant and an analyst in clean energy with a specialization in electric vehicles, said it’s not his intention to push local government to install charging stations. Rather, he thinks it makes good economic sense for one or a few businesses in Nogales or Santa Cruz County to add them. It’s an amenity that could draw people to their business.

“I don’t want to see several dozen chargers appear.” Rather, he would like to see two to four chargers “judiciously placed around the county so a Leaf driver from Tucson could make a day trip to Nogales, Tubac or Sonoita and maybe stay overnight at a hotel. That might have some benefits for local business.”

He believes that businesses won’t make money on the chargers but can in the extended visits of people who use them. Public chargers might cost between $5,000 and $10,000, he estimates.

As an example, Landess gives the time he needed to recharge his car in Tucson. He went to the Arizona Inn which has eight chargers. “They saved me. I probably spent $4 on charging and $40 in their bar while I was waiting.”

A scheduled speaker at the supervisors’ study session is Colleen Crowninshield who heads the Clean Cities Coalition of the Pima Association of Governments in Tucson. Landess said he plans to make brief comments. Also, there may be an individual representing a company that builds and sells electric vehicle chargers.

He said anyone who has questions about owning an electric vehicle can call him at (520) 281-5760 or email him at josh@jlaz.com.

Driving an electric vehicle (EV) is similar to driving a conventional car. This writer was invited to drive an EV in Rio Rico on residential streets and on Interstate 19.

Lacking a gas engine, the car is silent when backing up, so a gentle chime has been installed to warn pedestrians. It’s quiet while underway on the roads.

The car seemed to have pick-up and power just like any other family vehicle. It easily hit 75 miles per hour on the highway without any lugging.

There’s no gas gauge, but there are two displays that show how much electric power remains. Heating and air conditioning are available but put an additional drain on the power supply.

The car’s interior is comfortable with well-padded seats, and sufficient weight to the vehicle so this occupant felt protected.

The EV seems normal in so many ways, but what’s not normal is the awareness that you can’t refuel it at a gas station, so drivers must plan ahead to avoid being stranded.

The U.S. Department of Energy website lists information on pros and cons of EVs, which are p…