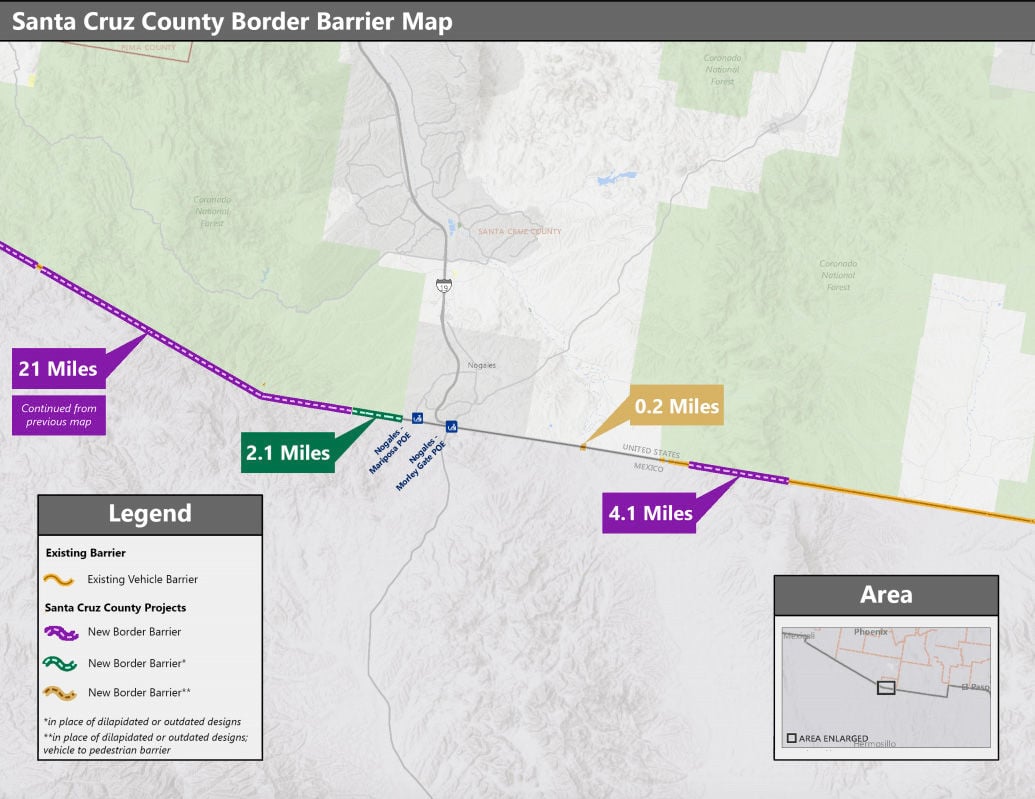 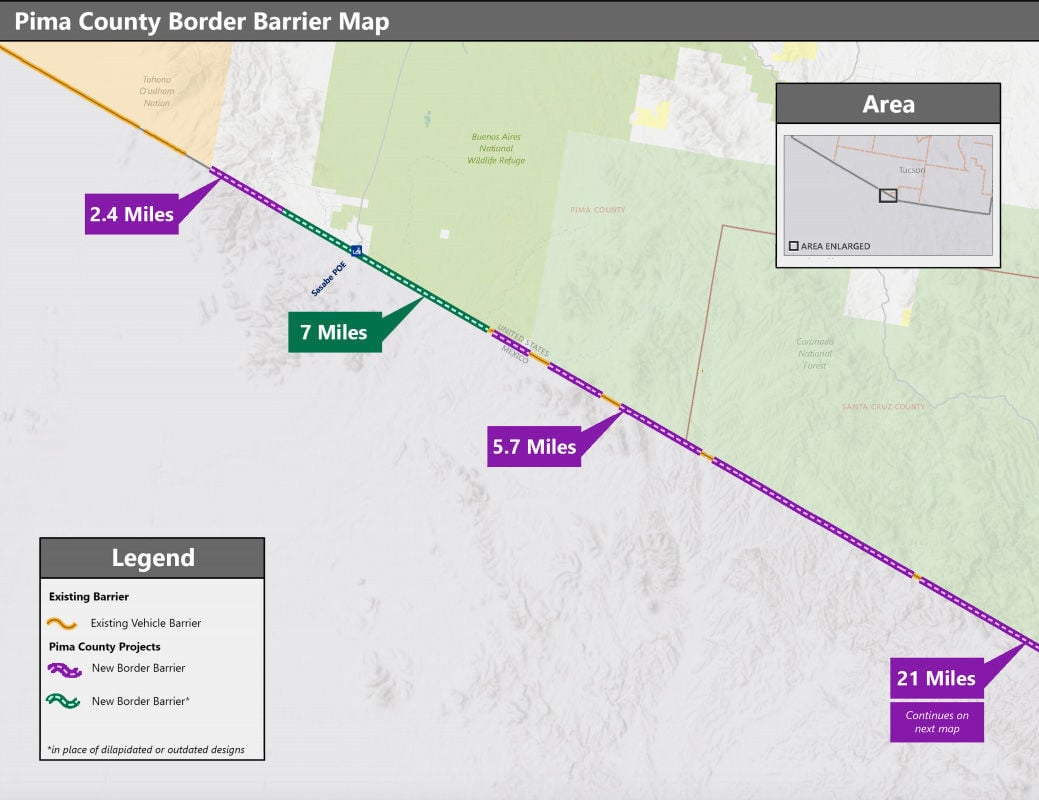 The federal government has plans to build about 27 miles of border fence in Santa Cruz County and create a continuous barrier from the Nogales area to the western edge of the county, according to a news release issued Monday by U.S. Customs and Border Protection.

The plans, which the public is invited to comment on, include 21 miles of new border fence running eastward from the Pima-Santa Cruz county line and 2.1 miles of fence that will replace an existing barrier just west of the City of Nogales. The proposal also calls for 4.1 miles of fence to the east of the city, between the Kino Springs neighborhood and Lochiel.

President Donald Trump and administration officials insist that a physical barrier is necessary to combat human trafficking and drug smuggling along the U.S.-Mexico border and have pushed ahead with plans for new border fence after congress rejected plans to fund its construction last year.

U.S. Rep. Raúl Grijalva, a Democrat from Tucson who represents Santa Cruz County in Congress, criticized the plan for new local fencing in an emailed statement.

“Once again the Trump Administration is prioritizing a border wall over real border security measures like investing in our ports of entry that could keep our communities safe,” Grijalva said through a spokesman. “With stolen funds from the military, he’s continuing his construction of a useless wall that will only destroy our environment and further militarize border communities.”

The new barrier will consist of “steel bollard fencing,” the release said. That’s the same type of fence that has divided Ambos Nogales since 2011, when bollards replaced a wall made from Vietnam-era landing mats.

The new fencing will use 30 foot bollards that are approximately six inches in diameter, according to the news release.

By comparison, when plans for the 2011 replacement of the border fence in the City of Nogales were announced, a Border Patrol spokesman said that fence would reach 15-20 feet above ground and run eight to 10 feet below the surface.

The pending projects “also include the installation of a linear ground detection system, road construction or refurbishment, and the installation of lighting, which will be supported by grid power and include embedded cameras,” the CBP news release said.

Dan Millis, a borderlands program manager with the Sierra Club, called the plan for new fence in Santa Cruz County “disappointing and disturbing.”

Randy Serraglio, a conservation advocate with the Center for Biological Diversity, said the wall would block the Santa Cruz River where it flows north into the United States, “which is likely to cause flooding and erosion and compromise a critically important riparian ecosystem that supports hundreds of species of plants and animals and provides a key movement corridor for wildlife.”

“It would also block key jaguar movement corridors east and west of Nogales, in the Patagonia, Pajarito, Atascosa and Tumacacori mountains,” Serraglio added in an emailed statement. “Unless jaguars can continue to move through this high, rugged terrain, they will not be able to access millions of acres of prime habitat in the U.S. where they lived for thousands of years before being wiped out in the 20th century.”

The plans go further than those outlined in a Feb. 25, 2019 Department of Homeland Security letter that requested military assistance to construct new fences, road and lighting along the Southwest border.

That letter, which was obtained by the Sierra Club and published in March 2019, outlined plans for about 213 miles of new barrier along the U.S.-Mexico border, including 20 miles of border fence throughout the county.

That document gave coordinates and descriptions of planned wall locations, but the Sierra Club noted at the time that written description of the sites and the location coordinates provided in the letter did not match precisely. And the 2019 DHS letter also did not specify what type of barrier would be constructed at the proposed locations.

CBP did not say in its announcement Monday what the cost of the proposed projects would be or where the funding would come from. But in its 2019 letter, DHS said that it hoped the Department of Defense would cover the costs “on a non-reimbursable basis as support to block drug smuggling corridors."

In Monday’s news release, CBP stated that it’s opening a public comment period for the project until April 15.

“CBP is seeking input on potential impacts to the environment, culture, quality of life, and commerce, including potential socioeconomic impacts,” the release said.

“CBP is conducting environmental site surveys and assessments and is gathering data and input from state and local government agencies, federal agencies, Native American tribes, and landowners that may be affected by or otherwise have an interest in the projects.”

Documents related to the project are available here.

Comments should be emailed to CBP at TucsonComments@cbp.dhs.gov and should include “Cochise, Pima, and Santa Cruz Counties Border Barrier Projects March 2020” in the subject line.