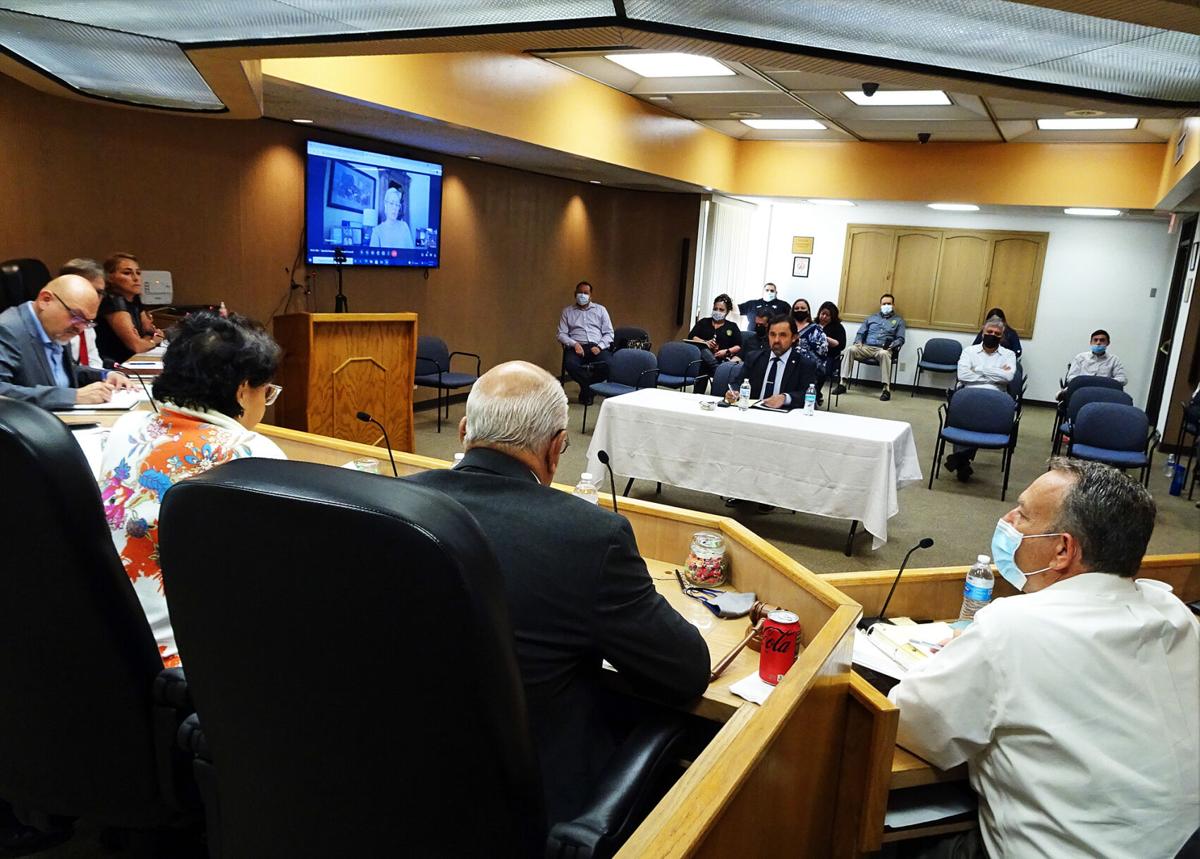 Adolfo Bailon, seated at the white tablecloth-covered table at center, interviews on Wednesday for the position of Nogales city manager. 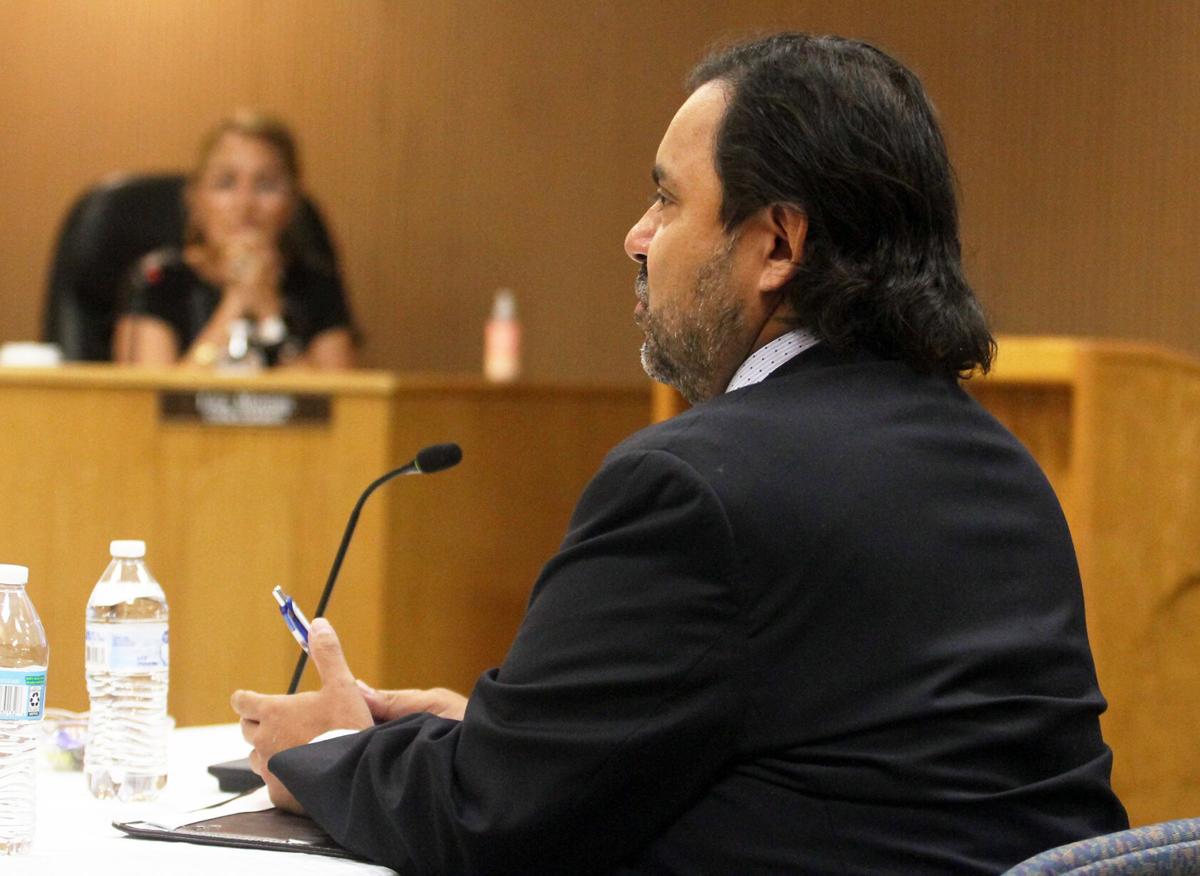 City manager candidate Adolfo Bailon answers questions from the mayor and council during his interview on Wednesday.

Adolfo Bailon, seated at the white tablecloth-covered table at center, interviews on Wednesday for the position of Nogales city manager.

City manager candidate Adolfo Bailon answers questions from the mayor and council during his interview on Wednesday.

Having gone nearly a year and a half without a permanent city manager on staff, the Nogales mayor and council interviewed their first finalist for the position on Wednesday: the Los Angeles-born former manager of a small town in Vermont who told the council members, “I think it’s time to come back to the West Coast.”

Speaking about why he was interested in the Nogales job, candidate Adolfo Bailon noted that the city faces issues on the municipal, state, federal and international levels.

“Why you didn’t see dozens and dozens and dozens of people applying for this position was surprising to me,” he said. “This is exactly the type of place that I feel every municipal manager that is interested in big issues, and also on smaller issues and helping the community, would want to be.”

The people present in the room during Bailon’s public interview – several department heads and city staffers, in addition to the seven council members who served as interviewers – likely had a good idea why applicants might not line up for the job. And while nobody specifically mentioned the dysfunctional politics that have long plagued the city, or the fact that four managers were either dumped, non-renewed without explanation or resigned during a recent four-year-plus period, several interviewers made reference to “the elephant in the room” in framing their questions for Bailon.

Councilwoman Liza Montiel used the phrase in asking Bailon how he would navigate “political games” and “do what’s best for the community, not for a certain group of people.” Saulo Bonilla invoked it when he asked, without naming names, if Bailon would be influenced by former councilmembers and mayors. And Councilman Jose “Joe” Diaz referred to the “political atmosphere” when asking Bailon about how he would work with department heads.

“When we have that distinction, when we only talk about the needs, and options for fulfilling the needs, then people in my position remove themselves from the political process,” he said, adding at another point that he wouldn’t be so desperate to keep his job that he’d be afraid to say no to people.

Other questions from the councilmembers focused on issues including the aging cross-border sewer line that runs through town, how Bailon would improve cooperation with the county government, how he would manage the dynamic of having a deputy city manager, and Bailon’s experience with cultural events.

His answers to some of those questions centered on skills assessment and relationship-building – for example, he said he’d try to bring Arizona’s senators to town to see and smell the problems related to the sewer line. As for improving the not-so-great city-county relationship, he said: “Sometimes it’s just a matter of having new blood, a new face, new voice.”

When Councilman Hector Bojorquez asked Bailon if he would be willing to form partnerships with entities such as the county, chamber of commerce and port authority to work on economic development, he responded: “Yes. Short answer, yes.”

Bailon described how in his previous job, he worked with different private-sector groups that were interested in economic development, but that had their own individual interests, and oriented them toward their shared goal. Then they obtained a grant with a statewide nonprofit consultancy and worked with a regional development group, which in turn found more grant money to incentivize new and existing businesses.

“It was in our effort to reach out to everyone that we then developed this network of, how we can improve our local economy,” he said.

Bailon added that they also recognized that child care is a big part of economic development, and he described an effort to purchase a building from a local university that will eventually become a child care center run by a nonprofit.

At another point, while speaking about the challenges facing Nogales, he said:

“I understand that reinvigorating the downtown is something that Nogales wants to do, and it’s also something that many municipalities throughout the country want to do,” he said. “But it’s a challenge because our infrastructure, our buildings, our shopping locations, are all built or predicated on an older model that may not function very well any more.”

That model – streets lined with 10,000-square-foot department stores – has been dealt a blow by online shopping, he said. That reality requires a new mindset in which large spaces are broken down into smaller retail locations, including service businesses like restaurants.

The city can encourage that kind of change through its zoning process, and by working with state-level economic development partners to incentivize business owners to adopt a new approach, Bailon said.

On the issue of annexation, something the city has sporadically tried to do in recent years, Bailon said: “I feel that annexation is a tool that municipalities have to grow.”

As for a pending proposal to try to annex unincorporated area north and east of city, essentially doubling Nogales’ footprint in the process, he said: “It would be a challenge – not the annexation itself, but the growth. We’d want to make sure that if growth is proposed through annexation, that services that will be delivered to the communities, that we’re capable of delivering those services.”

In fact, the annexation process is likely to be a challenge, since it requires the support of people in the targeted areas. When the issue came up during a recent meeting of residents of the Kino Springs area, most attendees opposed the idea of supporting the annexation effort, with some raising concerns about stability in the city government.

Garino appeared to recognize that reality when he insisted that annexation is doable service-wise, adding: “All we have to do is make sure that the people that live in those areas are willing to be part of the city.”

The mayor then gave Bailon a taste of his management style when he took a jab at City Attorney Mike Massee while discussing the prep work for an annexation bid. “Hopefully we should be done soon if Mr. Massee decides to finish it one day,” he said.

Following the nearly two-hour interview, the mayor and council briefly went into executive session before adjourning without taking any action.

City staff said on Wednesday that Bailon was the only finalist scheduled for an interview at that point.

Randolph, Vt., where Bailon previously served as town manager, is a community of 4,669 residents with an annual municipal budget of around $4.8 million (Nogales has a population of 19,770 and a current fiscal year budget of over $82 million).

According to reports in two Randolph-area news outlets, The Valley News and The Herald, Bailon was hired in August 2017 and given a three-year contract. At the end of that term, he notified the town’s selectboard that he intended to leave the position and move closer to his family on the West Coast.

The Herald reported that Bailon started in Randolph with a salary of $81,397, and that he was making $89,998 by the end of his tenure. Edward Johnson, the most recent Nogales city manager, was hired in January 2020 an annual salary of $140,000 and given a two-year contract.

Following the announcement of his departure from the Randolph town government last fall, Bailon stayed on until his replacement was hired in the spring. In the meantime, he applied and was interviewed for at least two other government jobs: city manager of East Grand Rapids, Mich., and city manager of Belgrade, Mont.

Local news coverage of those two searches showed that he was a finalist for both jobs, but ultimately wasn’t hired for either position.

According to a resume posted online as part of his candidacy for the East Grand Rapids job, Bailon graduated with a bachelor’s degree in political science from California State University in Fullerton in 2001. He told the Nogales City Council on Wednesday that following graduation, he worked for the California Legislature and taught English for a year in Korea.

Bailon worked as senior field representative for then-U.S. Sen. Senator Barbara Boxer (D-Calif.) from January 2004 to July 2012, and earned a master’s degree in public affairs from Brown University in Rhode Island in 2014, according to his resume. He remained in Rhode Island after that, working as director of the Mayor of Providence’s Center for City Services from January 2015 to December 2016, before taking the job in Vermont.

The City of Nogales has been seeking a chief administrator since the council and Johnson agreed to part ways in May 2020. Johnson left after only four months on the job after repeatedly clashing with officials, especially Garino.

In August 2020, the mayor and council voted to reach out to four contenders who didn’t get the manager job during the last search. When that approach didn’t work, the council agreed to pay $35,000 to an outside recruitment firm, CPS HR, to help find a new manager.

But even with a professional recruiter in charge, the search was slow to develop.

At one point, CPS HR provided three candidates to potentially fill the job on a temporary basis. But the council rejected the temp managers, saying the cost of hiring one was too high.

Meanwhile, a timeline for the search process for a permanent manager called for identifying around six candidates as semi-finalists, conducting in-person interviews with approximately three finalists, and having the mayor and council appoint a new manager during the week of Sept. 13.

According to an CPS HR representative, 11 candidates from an initial pool of 31 were presented to the council for consideration in executive session. The council then conducted video interviews with three during executive session, and chose to interview one candidate – Bailon – in person.

Watch a video of Bailon's complete in-person interview with the council here.