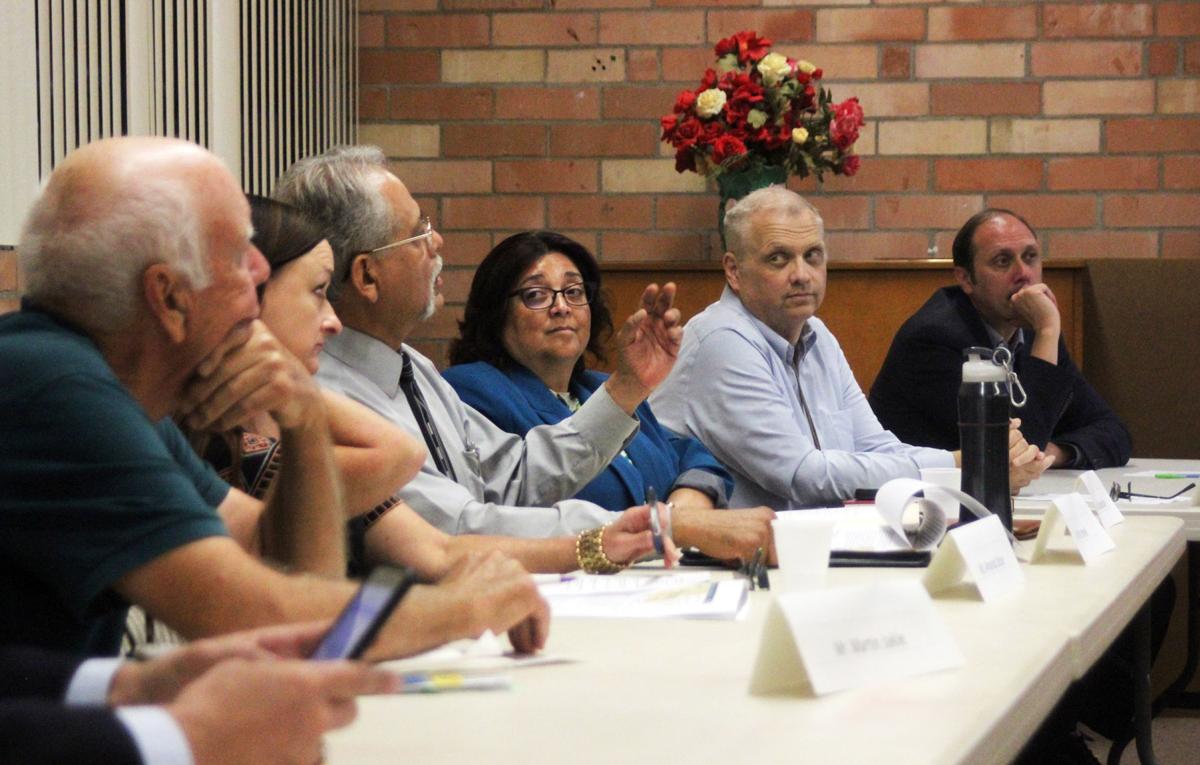 Ben Lomeli, third from left, a member of the board of the Southeast Arizona Citizens Forum and the Friends of the Santa Cruz River, discusses improvements to the International Outfall Interceptor. 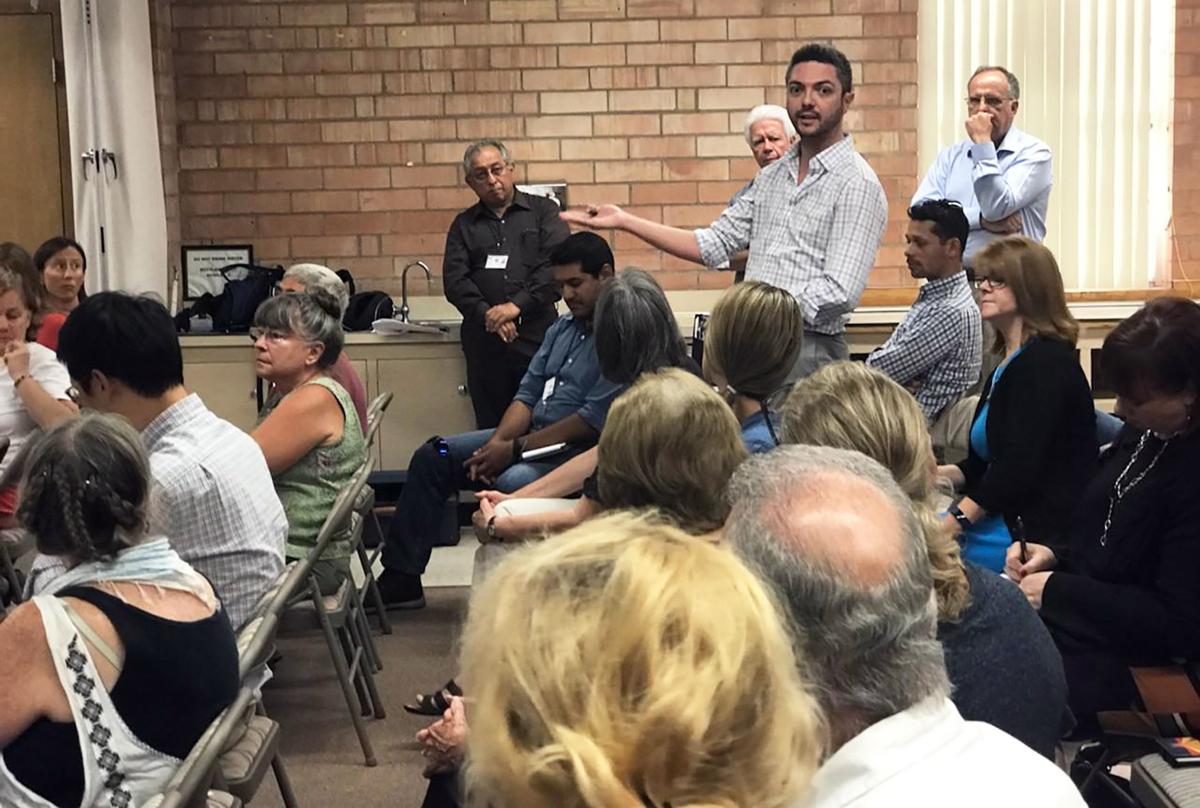 Chris Stoller, a staffer at Sen. Jeff Flake’s office in Tucson, discusses legislation that was introduced in both houses of Congress that seeks to relieve the City of Nogales’ financial responsibility for maintainance of and capitol improvements to the International Outfall Interceptor.

Ben Lomeli, third from left, a member of the board of the Southeast Arizona Citizens Forum and the Friends of the Santa Cruz River, discusses improvements to the International Outfall Interceptor.

Chris Stoller, a staffer at Sen. Jeff Flake’s office in Tucson, discusses legislation that was introduced in both houses of Congress that seeks to relieve the City of Nogales’ financial responsibility for maintainance of and capitol improvements to the International Outfall Interceptor.

Officials with the International Boundary and Water Commission (IBWC) said necessary repairs to fix a broken section of a cross-border sewer line that ruptured north of Nogales in late July have been slow partially because of bureaucratic hurdles the agency has had to overcome after local officials showed an unwillingness to help.

Addressing the board of the Southeast Arizona Citizens Forum, an advisory group working with the IBWC, Principal Engineer Jose Nuñez said that while crews have identified the scope of the work needed to permanently repair the breach, the City of Nogales and Santa Cruz County have been uncooperative, prolonging the process.

“I know a lot of people are saying, ‘Well why is it taking so long to do the repairs?’’ Nuñez told the roughly 60 people who attended the group’s meeting last Thursday evening at the Tubac Community Center.

In addition to the red tape, Nuñez said, crews also had to wait for water in the creek to recede before being able to assess damages and devise a plan to fix the break. IBWC also needs to obtain permission from Union Pacific to carry out the work, which has been a difficult task, he added.

Proposed repairs include replacing a 50-foot section of the pipe and replacing the manhole where the breach occurred. However, in order to carry out the work, crews will first have to stabilize the banks and procure the needed materials, Nuñez said.

A break was discovered in the International Outfall Interceptor, which carries approximately 10-14 million gallons of wastewater from Nogales, Sonora and Nogales, Ariz. to a treatment plant about nine miles north of the U.S.-Mexico border each day, on July 25 after heavy monsoon rains the previous weekend. Gov. Doug Ducey declared a state of emergency two days later after testing by state environmental officials found excessive levels of E. coli bacteria in sections of Potrero Creek near the pipeline break.

Raw sewage stopped leaking into Potrero Creek after crews installed a temporary bypass on Aug. 2, effectively rerouting the sewage around Manhole 89 and up to the Nogales International Wastewater Treatment plant just north of the break near Old Tucson Road. It costs $14,000 a day to operate the bypass 24 hours a day, Nuñez said.

The manhole was originally built on dry land but heavy bank erosion led to the manhole shifting into the creek. Once in the riverbed, he said, dead trees and other debris damaged the concrete casing around it, leading it to collapse and subsequently pierce the pipeline.

After the bypass was installed and the water in the creek receded, crews were able to use a camera to inspect the IOI upstream from the break. The video showed significant damage to pipe, and though water prevented the camera from assessing damages in the portion of the pipe downstream from the break, Nuñez said, staff believes it’s also damaged.

Proposed repairs include replacing Manhole 89 with a shallow manhole to prevent further damage, and replacing about 50 feet of damaged pipe with a new 30-inch reinforced concrete pipe. Crews also plan to concrete encase the exposed pipe within the wash and the new section downstream of the manhole.

Construction is slated to start Oct. 2 and is estimated to be completed by Oct. 27. However, Nuñez noted that the construction schedule would depend on obtaining the right-of-way from Union Pacific to stabilize the bank and build an earthen berm and a temporary diversion channel to divert water around the work site.

“I think by the time we’re going to be finished with this project, it’s going to cost anywhere between $1.75 to $2 million,” Nuñez said, adding that the hefty costs could have been avoided if the city would have heeded warnings about the state of disrepair of Manhole 89.

Throughout the months-long process, the IBWC has encountered several roadblocks. Nuñez said the agency asked the city and county to carry out bank stabilization work near the manhole and also construct the temporary diversion channel, but both government entities denied the request. Without stabilizing the bank, he added, it would be too dangerous for crews to begin construction because the creek could collapse.

At first, he said, the two governments said they didn’t have the necessary funds to carry out the work. But even after the Arizona Department of Emergency and Military Affairs said it would fund 75 percent of the project, the city and county refused to come up with the other 25 percent, he added.

“The response we received from the city was that they couldn’t do it. Same response from the county,” he said.

The IBWC then approached the U.S. Army Corps of Engineers to carry out permanent shoring work. Though the Army Corps agreed to carry out the work at no cost to the city or county, the corps needed a local government agency to sponsor the project and continue maintaining the creek after the work was completed. Again, the city and county refused the offer, Nuñez said.

In the end, the IBWC will carry out temporary shoring work. The design was submitted to Union Pacific for review on Sept. 20.

The project has hit another snag after the county said it would reopen Old Tucson Road on Oct. 1 to accommodate truck traffic with the start of the produce season. However, the pumps that are currently running the bypass 24 hours a day are sitting on the roadway, and Nuñez said relocating the pumps would require shutting them off which would lead to sewage spilling into the creek again.

The allegations drew ire from the audience, with many questioning why the city and county were unwilling to play along.

After being prompted by an audience member to address Nuñez’s claims, County Manager Jennifer St. John told attendees that the county does not own any part of the sewer line and it would be a liability to get further involved in the project. She added that county staff had already done what was needed to ensure public safety.

Aside from Councilman Marcelino Varona, Jr., no other representatives from the City of Nogales attended the meeting. Varona did not address Nuñez’s allegations that the city was being uncooperative.

The lack of cooperation also frustrated some members of the advisory board, including Ben Lomeli, who noted that finding a permanent fix to the breach was vital to the overall well-being of the Santa Cruz River and county residents.

“We have a physical system that is legally fragmented by jurisdictions and responsibilities so nobody wants to do the whole thing. We need a comprehensive, holistic, sustainable solution,” said Lomeli, a member of the Friends of the Santa Cruz River. “(A)ll of us need to work together and stop this ‘This is not my responsibility, it’s their responsibility.’”

“We were extremely lucky this time. It was only a partial break, it was only a single break even though several areas, segments were exposed,” he said, adding later: “We may not be so lucky the next time.”