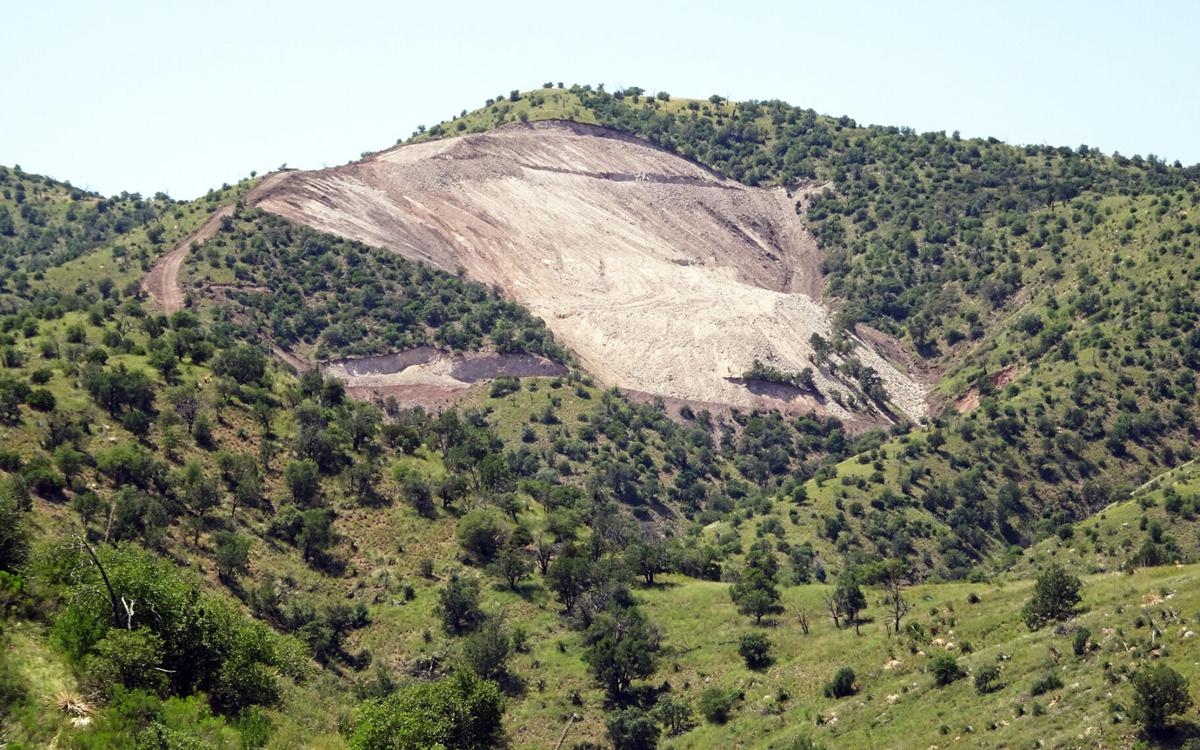 This mountainside on Coronado National Forest land south of Peña Blanca Lake, about a half-mile north of the U.S.-Mexico border, has been stripped bare as part of the preparations for construction of a border wall. 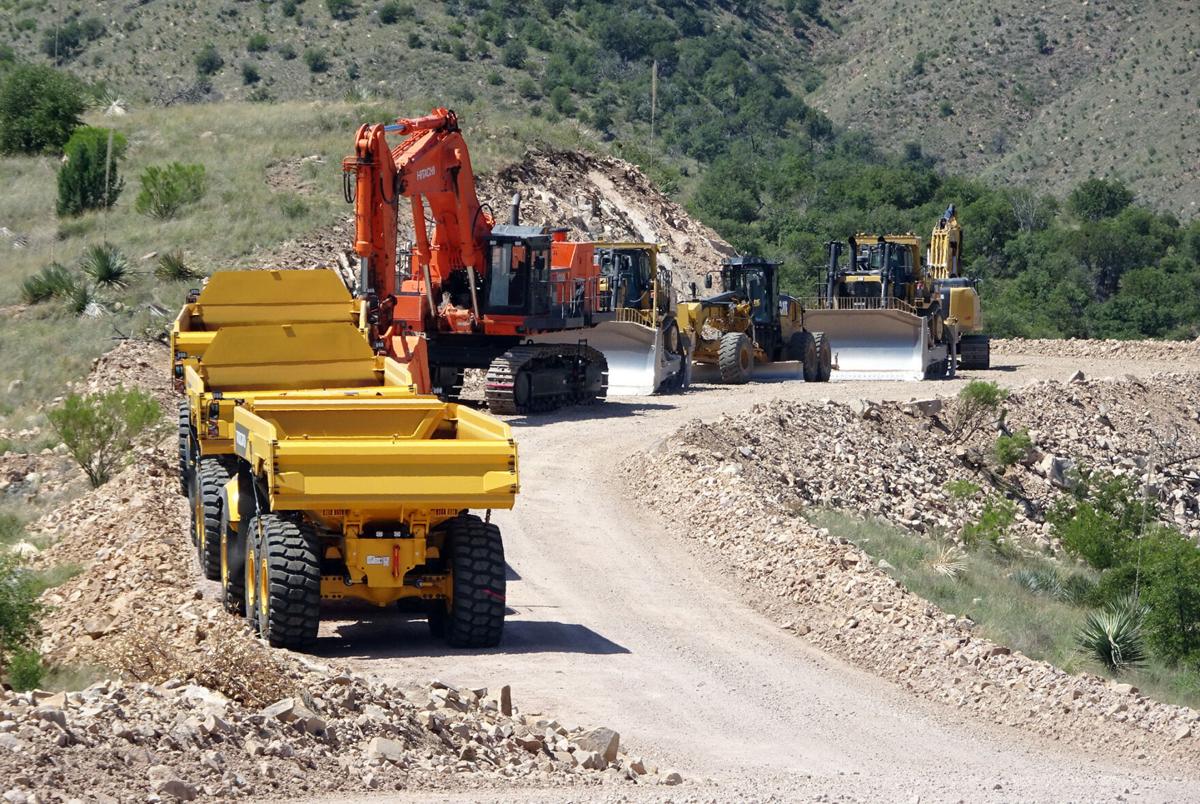 Heavy machinery is parked along Forest Road 222 on Monday, Sept. 7. 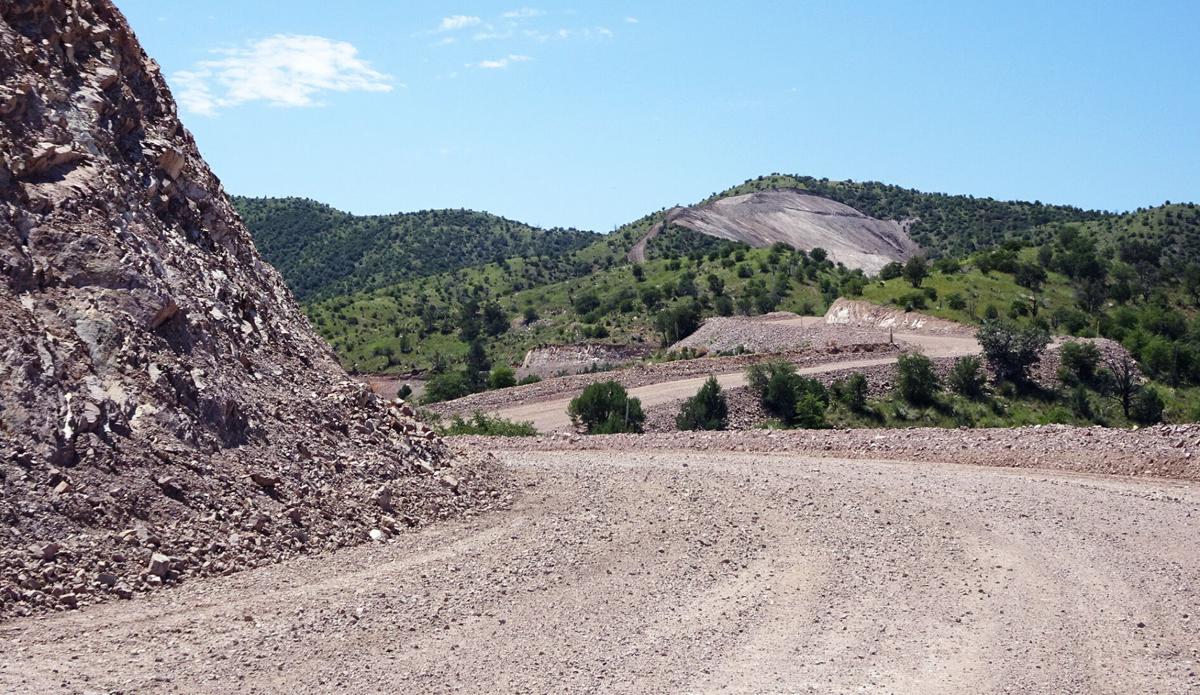 Forest Road 222 winds in a southwestern direction toward the Pajarito Mountains. 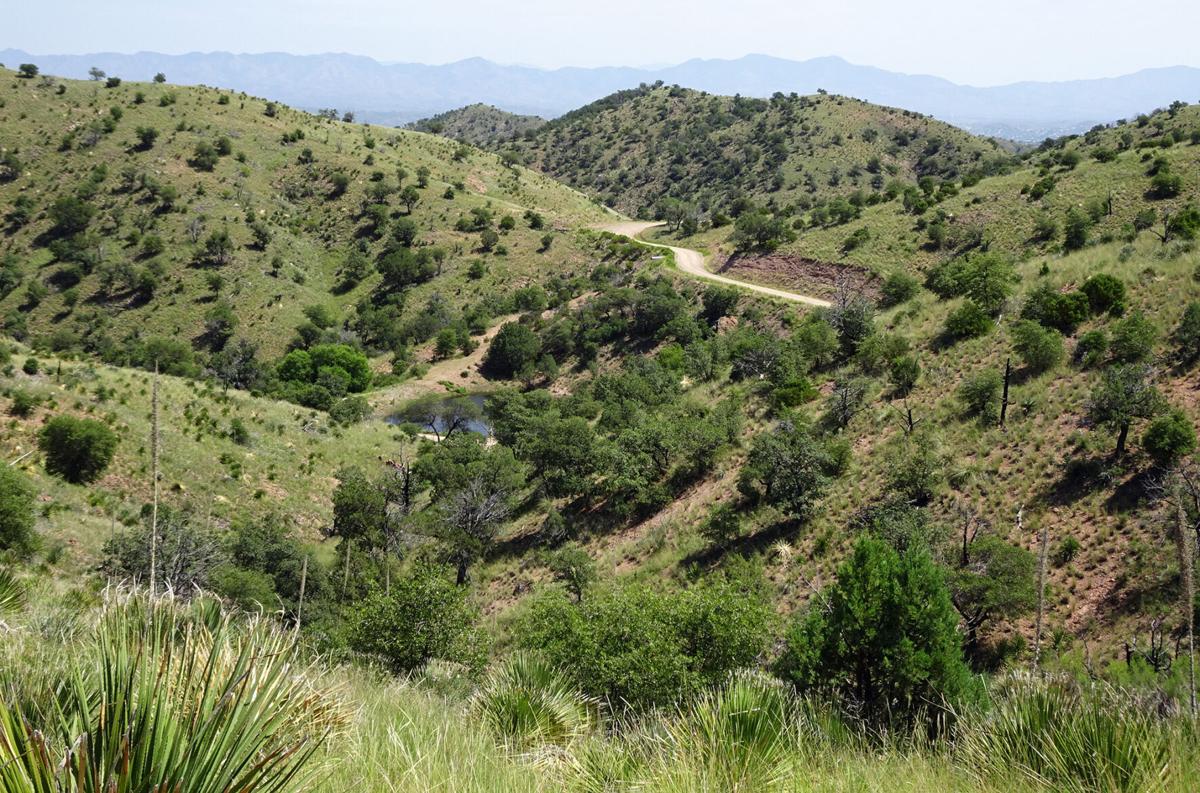 This view south shows a still-unimproved section of forest road winding south toward the U.S.-Mexico border, a half-mile away. To the right (west), out of the picture, is the razed mountainside. 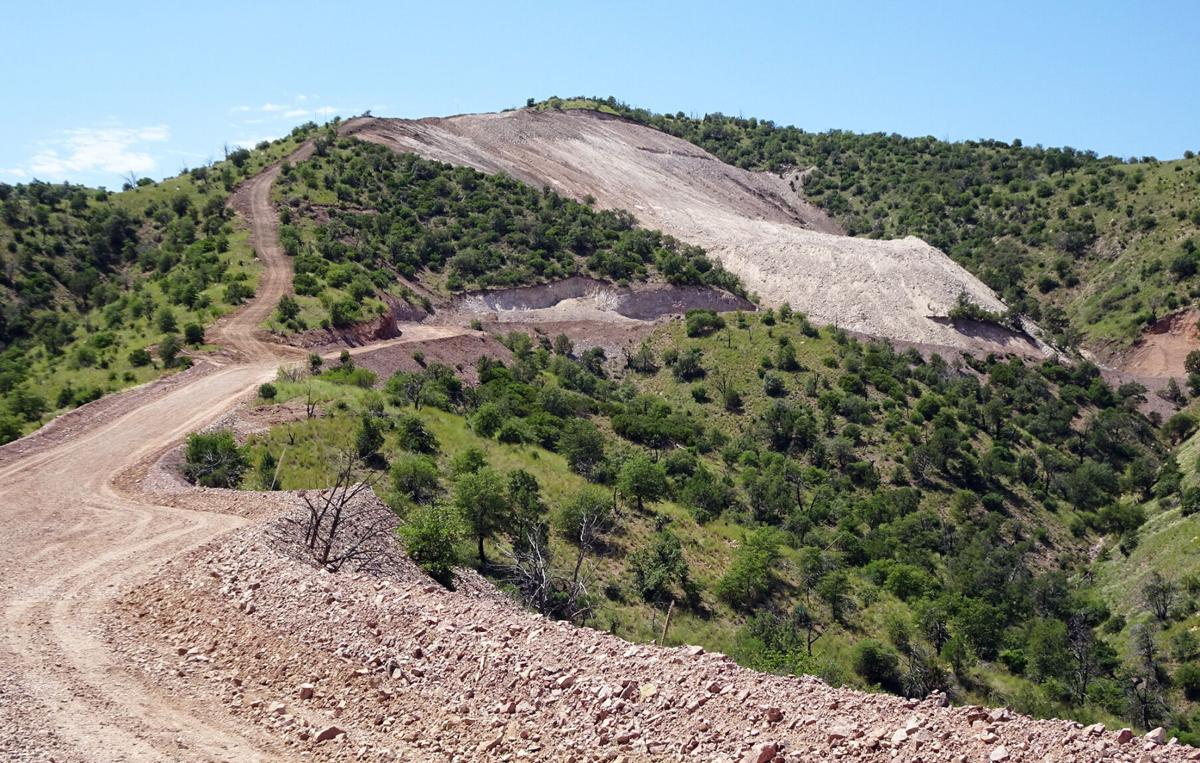 A road leads up to the sheared-off mountainside. 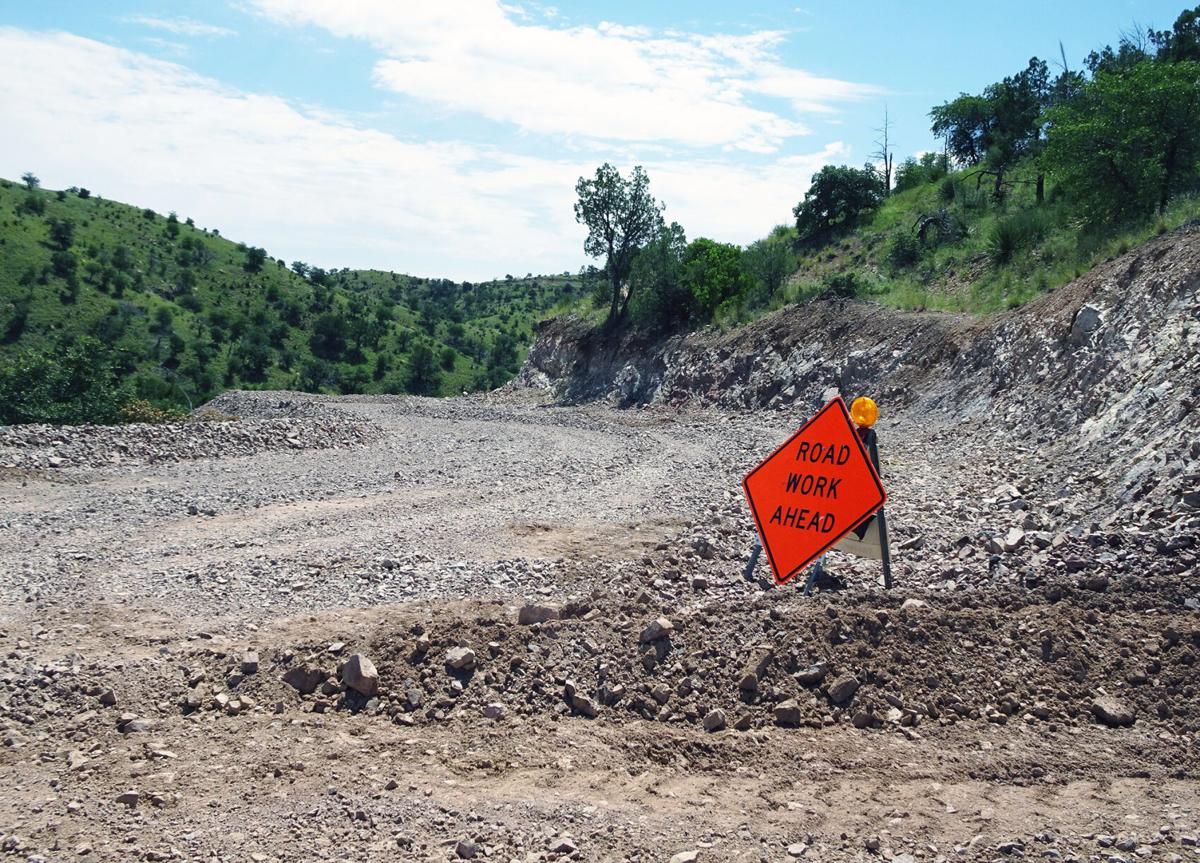 At this juncture, the road forks, with the left turn heading toward the border, a half-mile away, and the right turn leading to the razed mountainside. 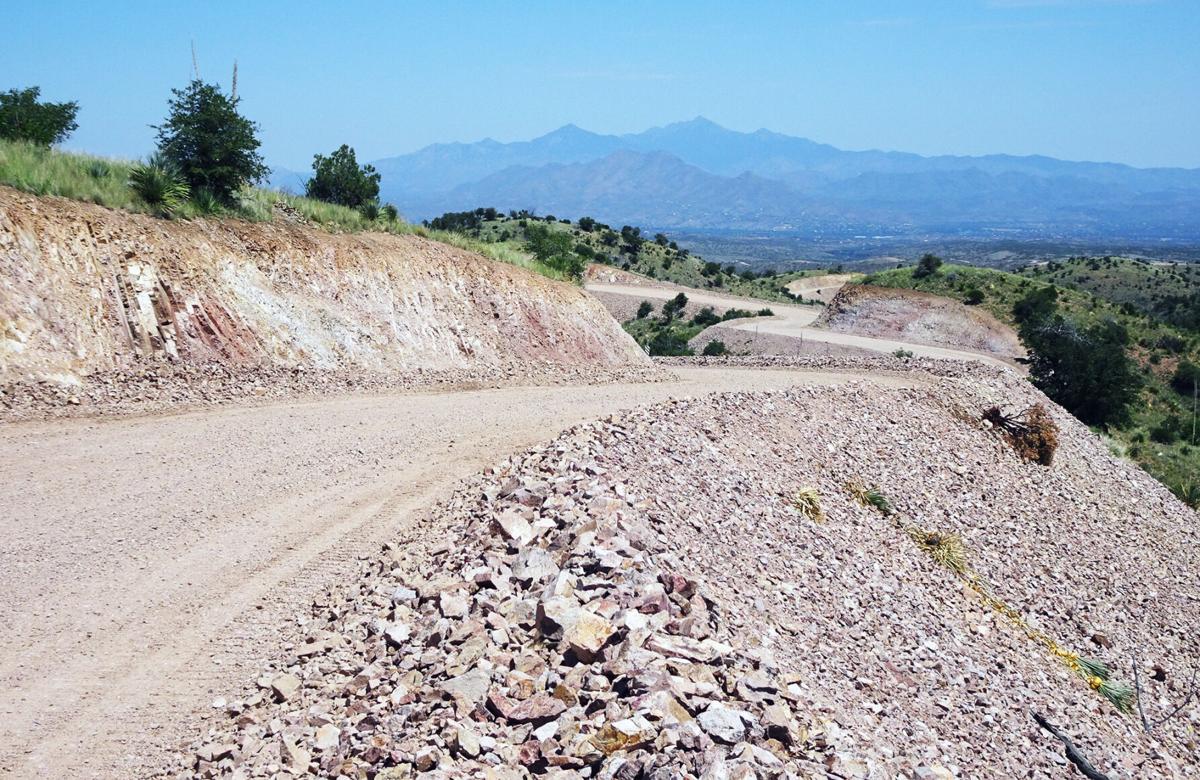 Forest Road 222 in western Santa Cruz County is being upgraded as part of a project to build a border wall through the undeveloped, mountainous area.

This mountainside on Coronado National Forest land south of Peña Blanca Lake, about a half-mile north of the U.S.-Mexico border, has been stripped bare as part of the preparations for construction of a border wall.

Forest Road 222 winds in a southwestern direction toward the Pajarito Mountains.

A road leads up to the sheared-off mountainside.

At this juncture, the road forks, with the left turn heading toward the border, a half-mile away, and the right turn leading to the razed mountainside.

Crews hired by the federal government have started opening access through the Coronado National Forest in preparation for the construction of a new border wall west of Nogales, shearing off a wooded mountainside in the process.

An NI staffer noticed the recently cut gash in the mountain on Monday – it’s readily visible from Ruby Road on the way to the Peña Blanca Lake recreation area – then followed a dirt road that had been widened and smoothed for six miles through National Forest land to the site, approximately a half-mile north of the U.S.-Mexico border.

Responding to a subsequent request for information about the project, a U.S. Customs and Border Protection spokesperson confirmed that the changes were related to the “Tucson 10/28 project,” which includes the construction of about 43 miles of new border wall.

“The Tucson 10/28 project is currently under construction with approximately five miles completed to date in Pima County,” the spokesperson said in an email. “Panels are anticipated to begin installation in Santa Cruz County in Fall 2020.”

The well-graded access road, approximately 20 feet wide at points, begins near Milepost 6 on the south side of Ruby Road. It follows the path of a previously existing roadway known as Forest Road 222 southwest into the Pajarito Mountains.

Heavy machinery was parked along the road on Monday, with logos identifying it as the property of Scottsdale-based Rummel Construction, as well as Fisher Sand and Gravel of North Dakota – a company that has been awarded a number of contracts to build President Trump’s U.S.-Mexico border wall, including the $1.28-billion Tucson 10/28 project.

The side of the peak in the Pajarito Mountains was sliced off to create a staging area to prepare for upcoming work, according to Jay Field, a public information officer for the U.S. Army Corps of Engineers, which awarded the border wall contract.

In a news release issued on March 16, CBP officials said the federal government had plans to build about 27 miles of border fence in Santa Cruz County.

It’s part of Trump’s larger promise to construct 450 miles of wall at the U.S.-Mexico border by the end of the year.

The 21 miles of border that the Trump administration plans to wall off at the western end of Santa Cruz County lies in undeveloped, mountainous terrain, all of it within the Coronado National Forest. That raises questions about how crews will reach the stretch of border with the necessary material and machinery.

Field said that Forest Road 222 was the only road crews had worked on as of Thursday to access the worksite. But the CBP spokesperson did not dismiss the possibility of opening or improving more roads as the project unfolds.

“Access roads are often required for construction, and as construction progresses the contractor will have a better idea of the necessary and required access roads for the project,” the spokesperson said.

The Santa Cruz County government sent a public works crew to the worksite on Wednesday afternoon to reconnoiter the area after the NI brought the project to the attention of a county supervisor.

“Because it’s on federal land, they’re not getting any permits, so we don’t know what they’re doing,” Supervisor Manuel Ruiz said, expressing his wish that the county had been briefed on the plans beforehand.

“I personally think they look at local governments as a hinderance instead of something that’s positive,” he said, noting that the county had also been kept in the dark about a project to build a bridge/culvert across the Santa Cruz River at the border in early 2019.

The Coronado National Forest was tight-lipped when the NI reached out with specific questions about the road work in western Santa Cruz County and its impact on the land. Dorilis Camacho Torres, a spokeswoman for the CNF, said only that forest officials are collaborating with CBP to “maintain road standards and to reduce any possible impact.”

The Trump’s administration has insisted that the physical barrier is necessary to combat human trafficking and drug smuggling across the U.S.-Mexico border. But Ruiz countered that the federal government was trying to fix one problem by creating another.

“It’s frustrating for everyone because at the end of the day… what they’re doing is they’re creating roadways for illegal activity to occur,” he said, adding his frustration at the fact that the federal government has waived an array of contracting and environmental regulations to allow for the rapid construction of the border wall.

Shown a photo of the razed mountainside, Dan Millis of the Sierra Club said that Fisher Sand and Gravel “is scarring the landscape, and we will likely experience many years of uncontrolled erosion after Fisher packs up and leaves.”

He added that the endangered jaguar and ocelot, as well as javelina, mule deer, white tail deer, coatimundis, coyotes and other species, will be significantly impacted by the unfolding project as their habitats are destroyed by road-building and the border barrier blocks their migration.

“More roads in wild areas causes habitat fragmentation and destruction, meaning less vegetation and ground cover for wildlife such as birds and game species,” Millis said. “This is very bad news for Arizona’s economy, which depends on tourism, watchable wildlife and hunting.”

Fields, the U.S. Army Corps of Engineers spokesman, said that while preparation work has already started, the actual construction of the border wall in western Santa Cruz County is scheduled to begin in late October or early November.