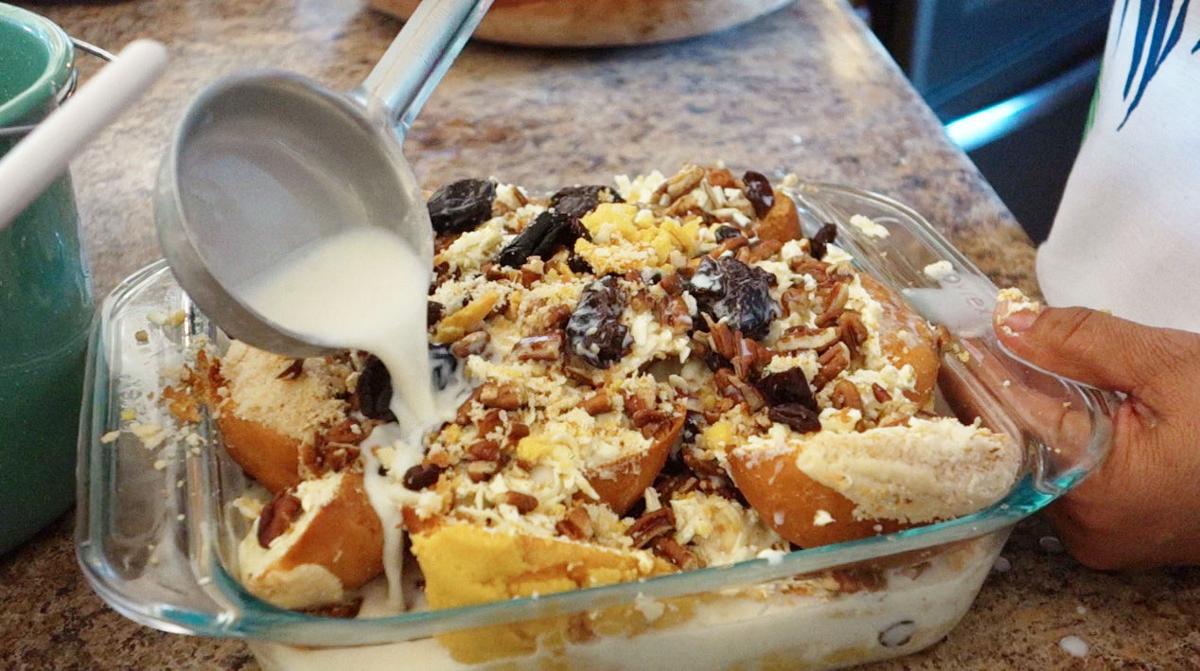 Maria Antonieta Gastelum of Nogales pours sweetened milk with cinnamon over layers of dried fruit, bread and nuts before placing her “capirotada” in the oven. 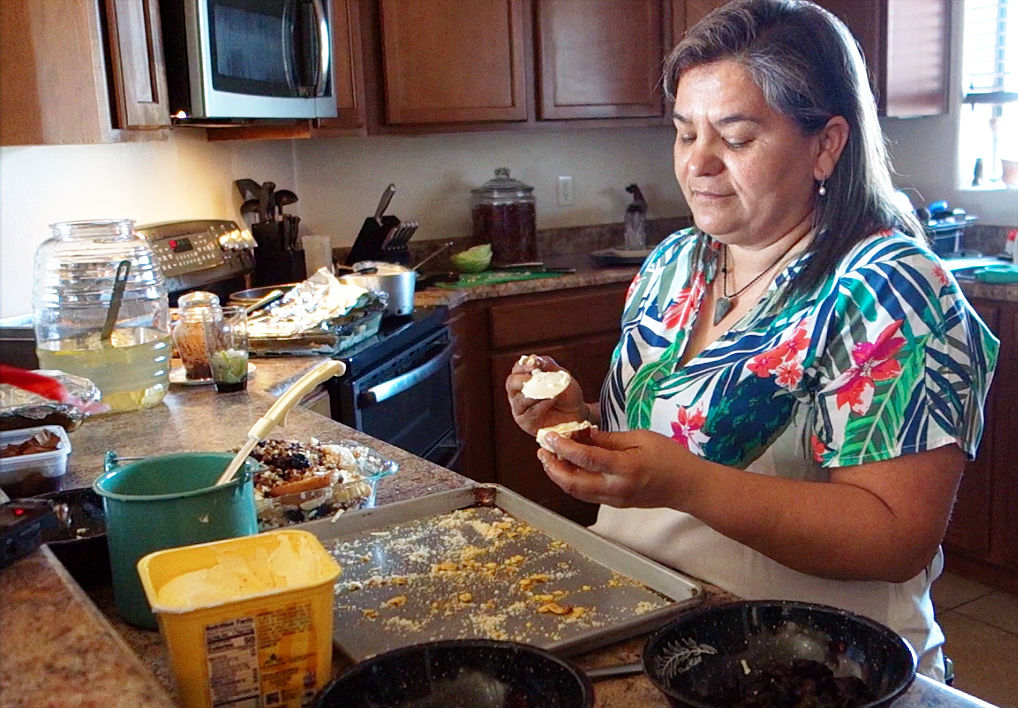 Maria Antonieta Gastelum spreads butter on toasted bread for the last layer of the capirotada. 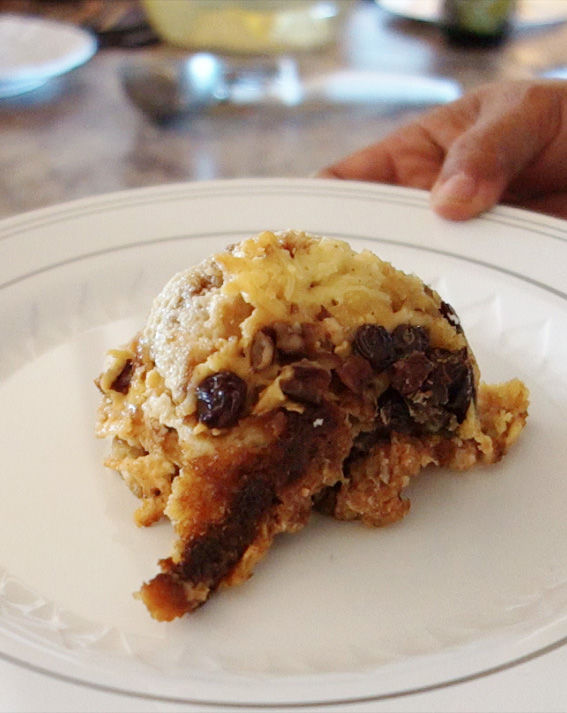 Gastelum uses an ice cream scoop to serve the capirotada to make sure that all portions are the same size. 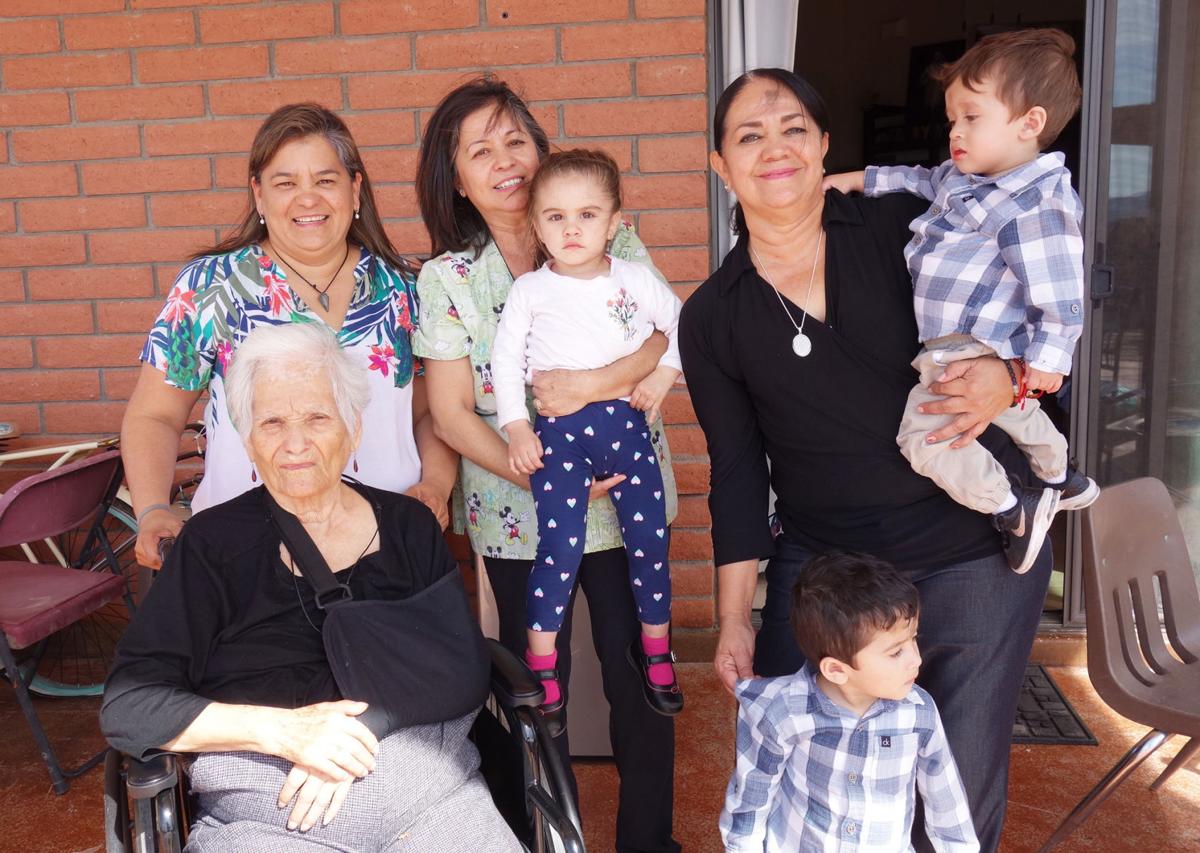 Maria Antonieta Gastelum, top left, gathers with her sisters, mother and other family members on Ash Wednesday to enjoy a capirotada. Gastelum said the tradition of making capirotada symbolizes the importance of family unity, a value that her mother (seated) passed on to her and her sisters. 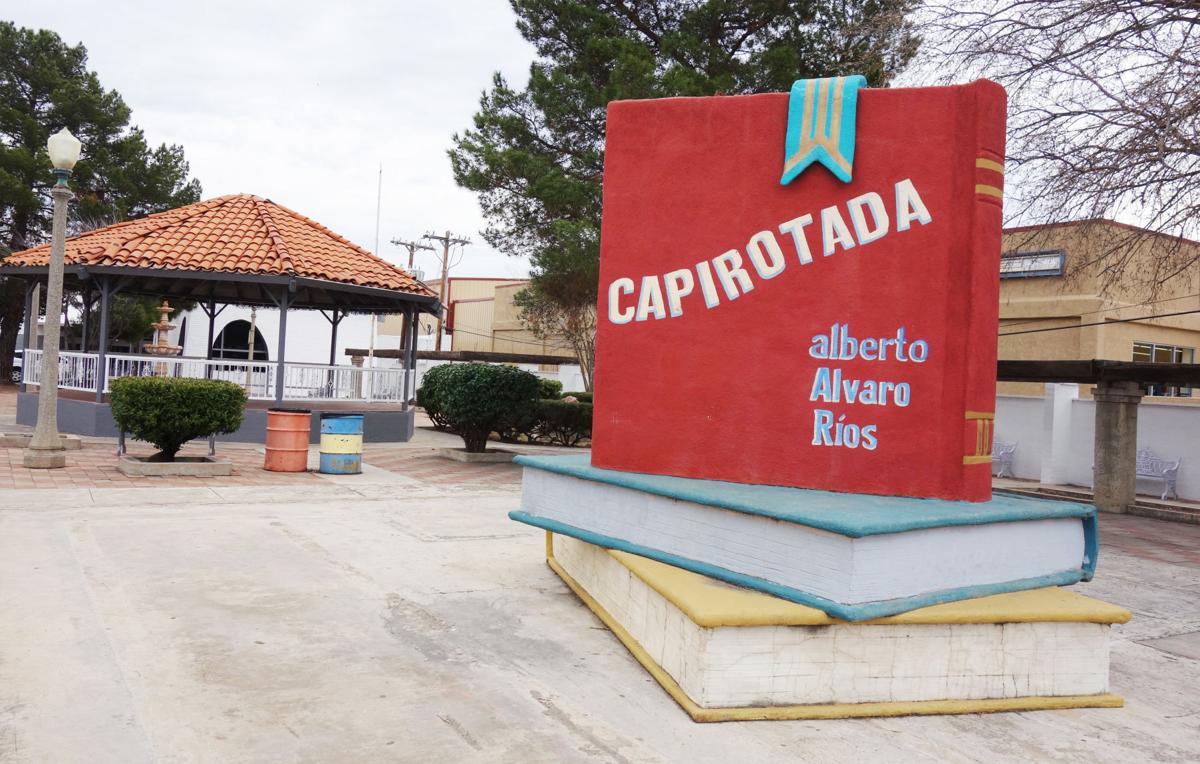 Nogales native and writer Alberto Alvaro Rios named his memoir, a collection of colorful vignettes, after capirotada, a traditional Mexican bread pudding known for its inventive mixture of ingredients. The book has been memorialized in statue form outside the Nogales Public Library, as seen here. 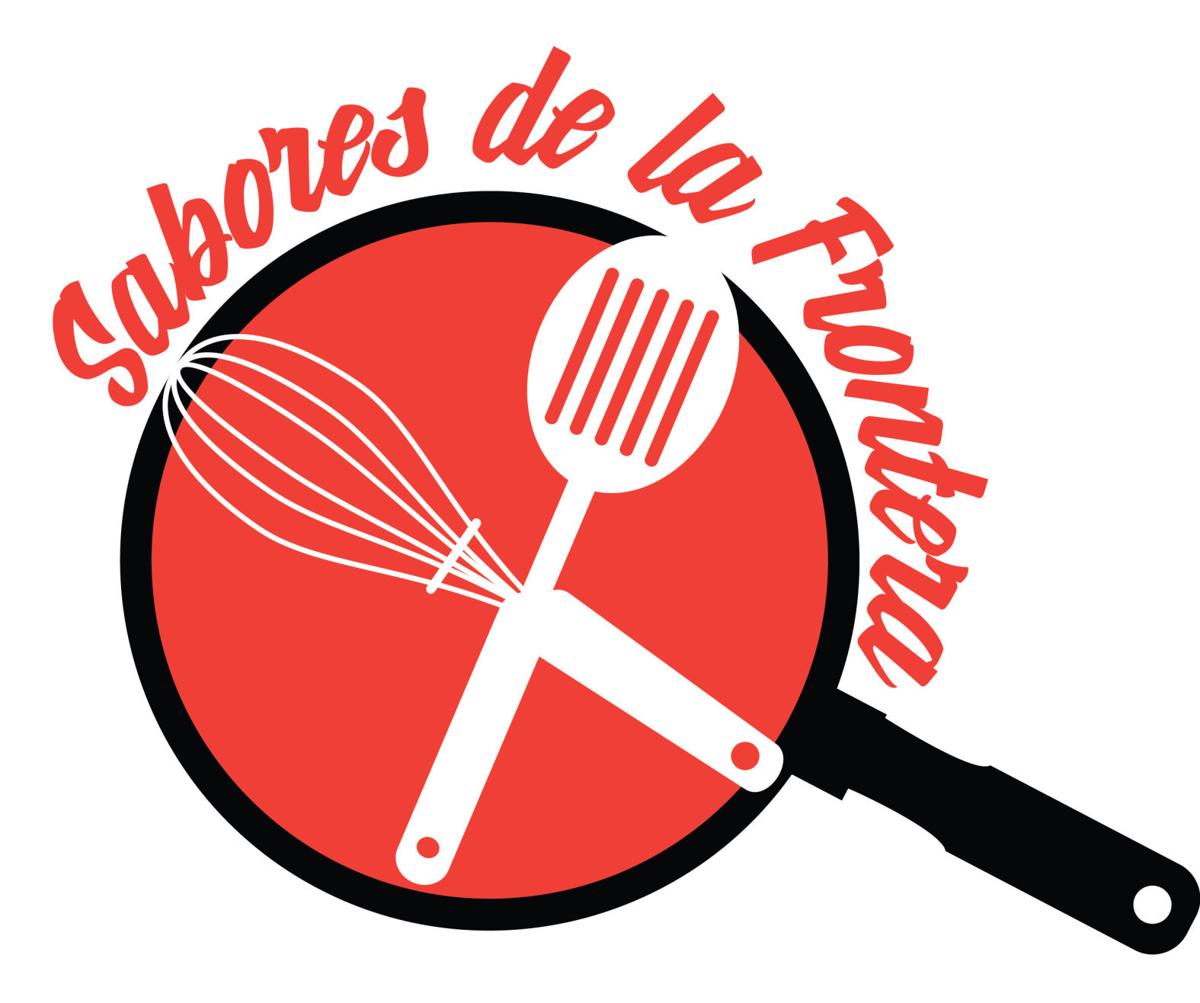 As some folks finished their lunch around the dining room table and others enjoyed the warm sun in the backyard of the Gastelum family residence on Wednesday, still others walked through the front door and headed straight to the kitchen, where Maria Antonieta Gastelum was preparing to cook.

It was a special gathering for Ash Wednesday, Gastelum said, adding that she had invited family members to her Nogales home to mark the beginning of Lent with the traditional dessert known as “capirotada,” a Mexican cheesy bread pudding mixed with a variety of ingredients.

“Every ingredient that you put in the capirotada represents something about the life of Christ,” Gastelum said, explaining why the dish is made specifically during Lent, the 40-day period, not counting Sundays, beginning on Ash Wednesday and ending on Holy Saturday before Easter.

Capirotada is also a Lenten favorite for the fact that it’s not made with meat, which Christians are supposed to avoid on Ash Wednesday and Fridays during the 40-day “cuaresma.”

“We used to wait for Lent so that we could eat capirotada. It was always a big reunion, a party,” Gastelum said.

Although she couldn’t remember exactly what each element of the dish represents, she said the bread symbolizes Christ himself. With bread as the base of the dish, she said, the rest of the ingredients vary with each family’s individual recipe and can include different nuts, dried fruits, cheeses and spices.

The writer Alberto Alvaro Rios, who grew up in the local area and became the state’s first poet laureate in 2013, named his 1999 memoir “Capirotada: a Nogales memoir,” using the dish as a metaphor for the mix of border-town experiences he recounts in a series of vignettes.

Rios describes capirotada as “a zoo of foods” similar to a fruitcake, “but raised several notches to the level of a one-ring circus, with everybody and everything gathered at the grand finale.”

He also highlights the “elegance” behind the process of making a capirotada, describing how local families naturally know to buy certain ingredients on the Mexican side of the border to ensure the best flavors for the dish.

Like Rios described, Gastelum she buys certain ingredients in Nogales, Sonora, such as the queso fresco. But for her, she said, the main significance of the dish is the years of culture behind it.

“It’s to continue with the traditions and to keep remembering our ancestors,” she said. “We used to eat capirotada at my grandmother’s house and it was a party, especially on Ash Wednesday and every Friday during Lent.”

Now with her daughters all grown up and new babies to pass their values to, Gastelum said she and her sisters try their best to keep the tradition alive, just as they did during this year’s Ash Wednesday celebration.

Chiming in on the conversation, her mother Esperanza recounted the times when the generations before her gathered for the same celebration.

“We would always get together at whichever house had capirotada,” Esperanza said. “But let’s make one thing clear, this recipe is not the original capirotada.”

Over the years, the Gastelum family has made a few tweaks to the family recipe in response to some people’s displeasure with the extreme mixture of ingredients, she said.

“My husband always tells me, ‘Make a special one for me with only walnuts and cheese,’ because he doesn’t like the dried prunes and raisins,” Gastelum said. “My daughters especially like this capirotada because it doesn’t have too many ingredients.”

Sometimes, they have to make both the original and family recipe because everyone prefers something different, she said. But in the end, it remains the same concept that is passed down from generation to generation.

The local borderlands are home to a rich gastronomy that combines Spanish, Mexican indigenous and Southwest indigenous culinary traditions. Cooks in formal and informal settings around Santa Cruz County and Nogales, Sonora carry on and add to those traditions on a daily basis, and this monthly series aims to highlight them and their creations.

If you or someone you know has a particularly emblematic borderlands recipe or cooking technique and would like to be featured in the series, please contact reporter Genesis Lara at genesis@nogalesinternational.com or (520) 415-1842.