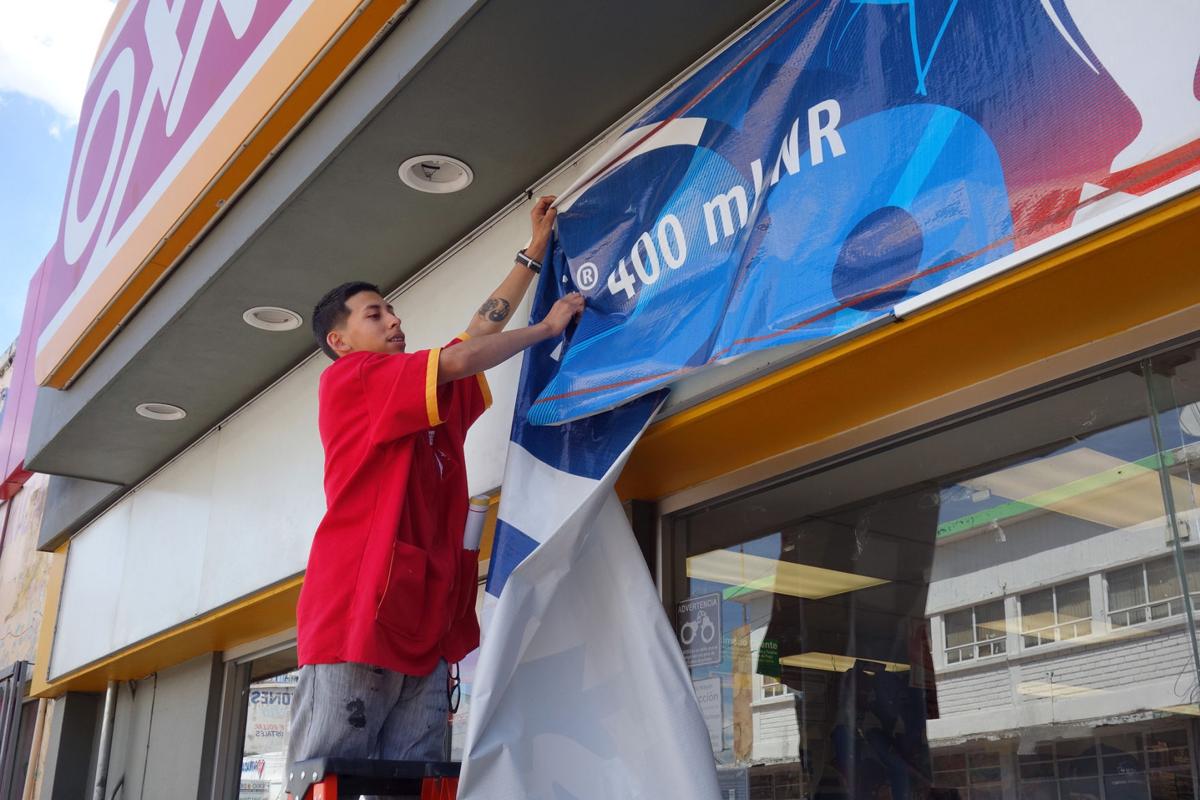 Abel Alejandro Oroz Vega works on updating the outdoor advertisments at the OXXO convenience store where he works in Nogales, Sonora. Oroz said he was happy to see his wage increase after the federal government launched the Zona Libre en la Frontera Norte. 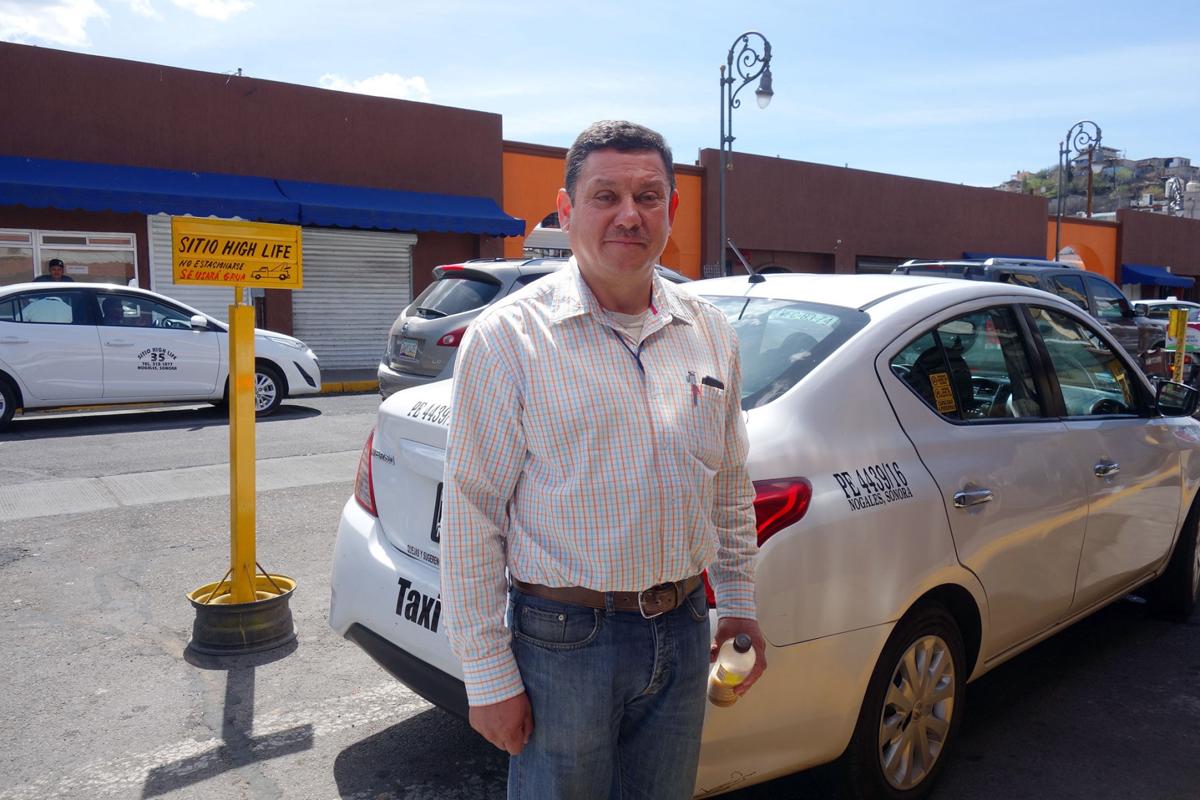 Victor Perez, a taxi driver in Nogales, Sonora for the past 32 years, said he doesn’t have high hopes that local gasoline prices will be lowered to match the prices seen in Nogales, Ariz.

An initiative by Mexico’s new president to boost the economy of the country’s northern border region through wage, tax and price reforms is off to a slow, inconsistent start in Nogales, Sonora, residents and officials said this week.

President Andres Manuel Lopez Obrador launched the “Zona Libre de la Frontera Norte,” or “Northern Border Free Zone,” initiative for the strip of territory within 25 kilometers of the U.S. border at the start of the year, a month after being sworn in for a six-year term. The plan includes doubling the minimum wage to 176.2 pesos (about $9) per day, while also halving the IVA value-added tax from 16 to 8 percent, reducing the ISR corporate tax from 30 to 20 percent, and lowering gasoline prices to match those offered on the U.S. side of the border.

“It’s going to be the biggest free zone in the world,” Lopez Obrador said in one of several speeches to inaugurate the program, which he called “perfectible” and promised to evaluate after three months.

With the three-month mark fast approaching, the “Zona Libre” is still just getting off the ground in Nogales, Sonora.

Meanwhile, the parts of the program that have been implemented have been slow to catch on. For example, business owners must submit an application to see if they are eligible for the lower IVA and ISR taxes, and local businesses are just beginning to file the paperwork, Jauregui said.

“As long as the business owners don’t file an application and follow up with the procedure to give notice that their business is on the border, they will be charged the normal IVAs and ISRs,” he said.

Sitting behind the counter of a pharmacy in Nogales, Sonora near the Dennis DeConcini Port of Entry, owner Israel Sandoval said he wasn’t sure how the new border-zone reforms affected him. “The law hasn’t settled completely, just in big companies and department stores,” Sandoval said.

“We’re always the last to find out,” he said of small business owners like himself. “They don’t give information, not even the mayor.”

Taking down a banner from the exterior of an OXXO convenience store on Wednesday, employee Abel Alejandro Oroz Vega said the store had lowered its IVA tax a while ago.

In addition, OXXO, a ubiquitous chain of convenience stores with more than 17,000 locations throughout Mexico, raised Oroz’s pay from 145 pesos per day to the new daily minimum of 175 pesos.

His coworker Anahi Rodriguez said the raise she received has resulted in an extra 300 pesos per week.

“It’s helped me out a lot economically,” she said.

“A lot of people I know work at the factories and they tell me that they’ve also had their wages raised,” Rodriguez added, in reference to the numerous maquiladoras, or foreign-owned assembly plants, that provide low-wage jobs in the city.

Jauregui, the city manager, said efforts to lower local gasoline prices to match those in Arizona, another component of the zona libre, are in the works.

Taxi driver Victor Perez, however, said he doesn’t think prices at the pump would decrease by much, given other national reforms.

“The government can’t interfere with gasoline prices anymore because, with the energy reform, the prices of combustibles were liberated,” he said. “So the government doesn’t have control of that anymore.”

In 2013, during the previous presidential administration of Enrique Peña Nieto, the Mexican government passed a constitutional reform that reduced the government’s control over the energy sector and allowed private and foreign investment. When the government eliminated gas subsidies effective Jan. 1, 2017 as part of the deregulation effort, prices went up, setting off nationwide protests over the so-called “gasolinazo.”

The cheapest gas in Nogales, Sonora is still as costly as the most expensive blends in Nogales, Ariz., Perez said, adding that he also thinks the quality of gas sold in Mexico is poorer than in the United States – a widely shared belief that further complicates efforts to encourage drivers to buy local.

“The local gasoline organizations, they get together to set higher margins of profits than in other cities,” Perez said. “Maybe, for political reasons, they could reach a deal, but I don’t think it would be equal to the prices in Nogales, Ariz.”

While full implementation of the “Zona Libre” plan could benefit the border city, Perez said, he doubted it will happen. “They’re just empty words,” he said.