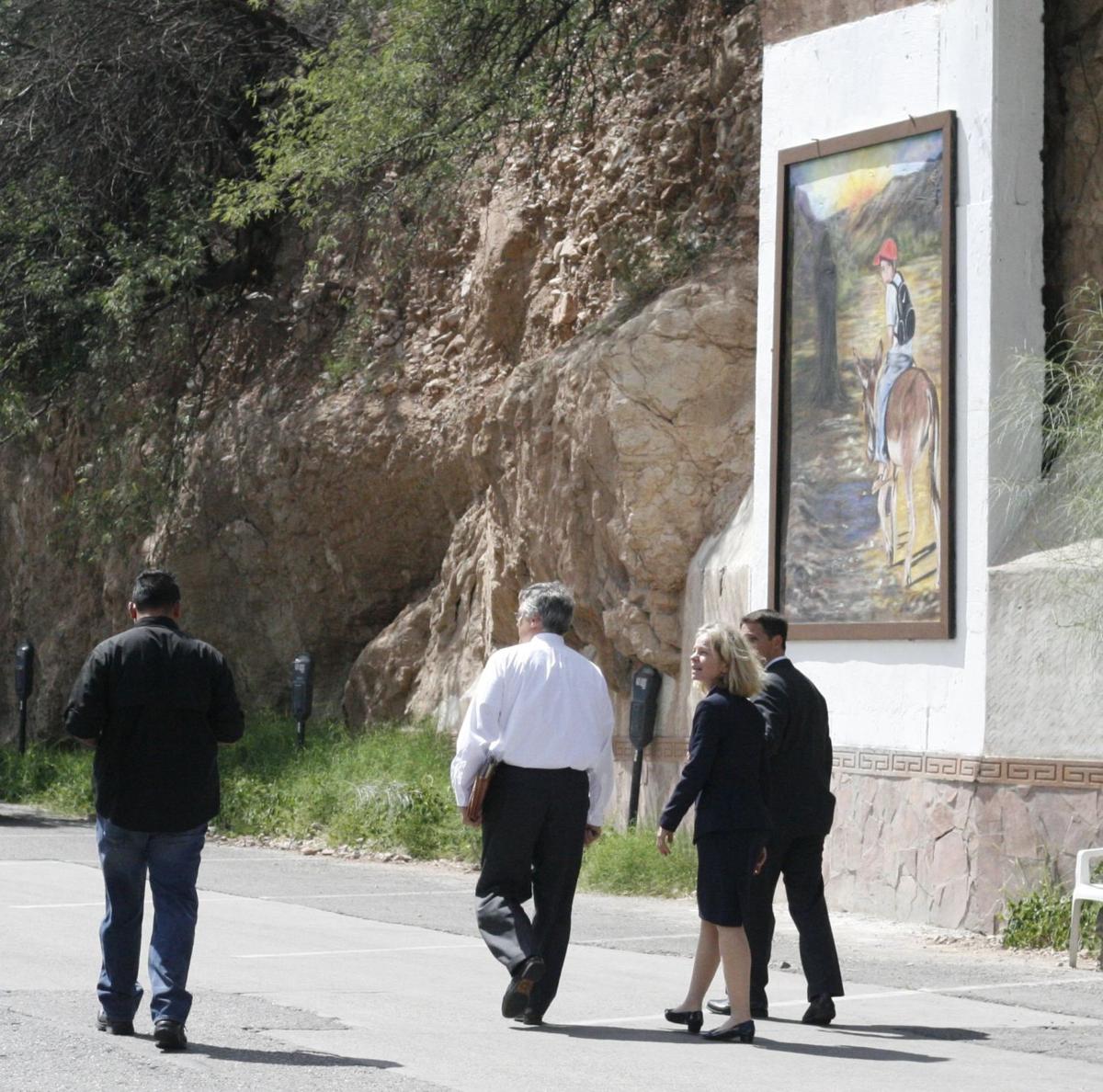 U.S. Attorneys Wallace Kleindienst and Karen Rolley, at center, walk away from the shooting scene Tuesday in Nogales, Sonora. 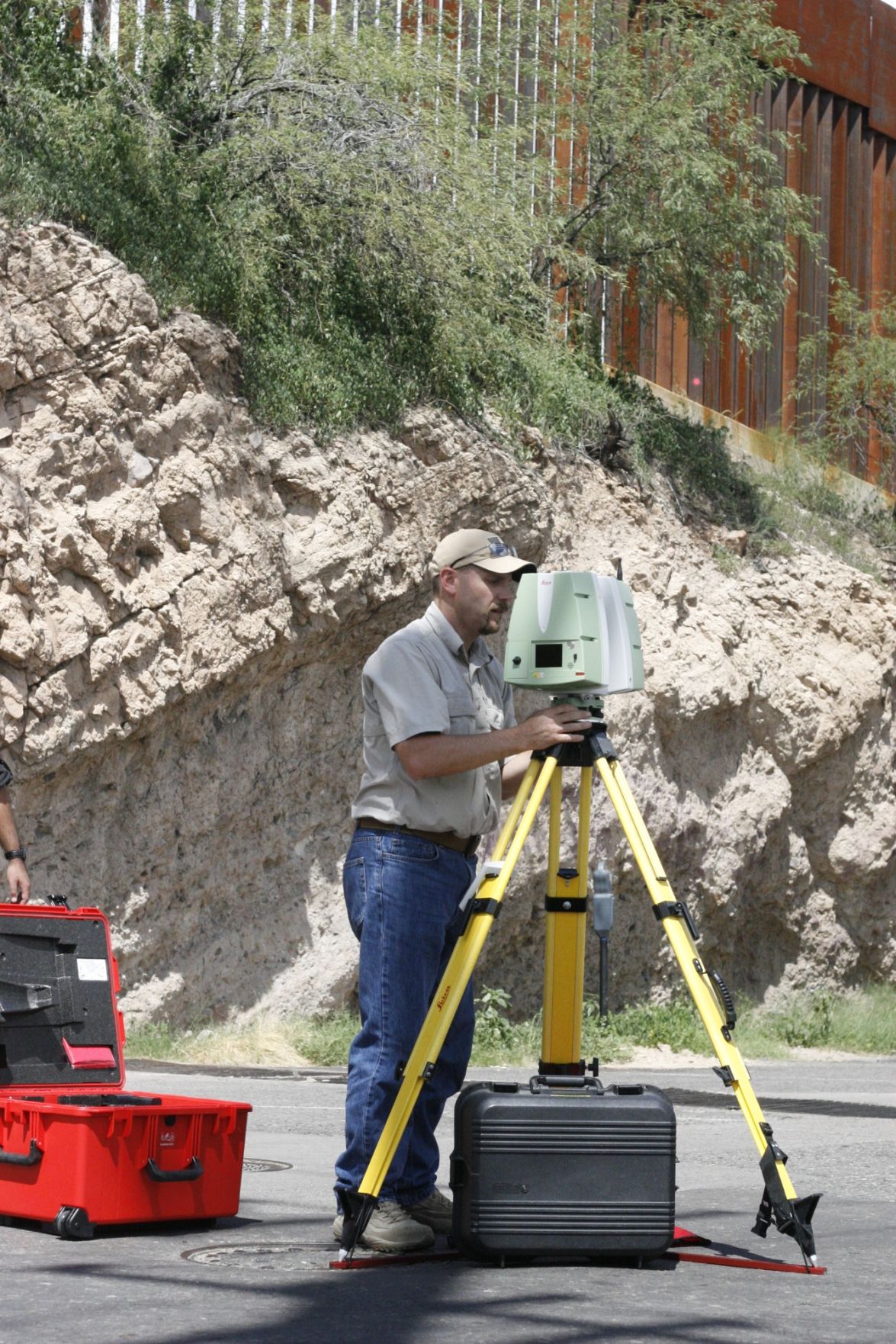 Among the tools employed during the reconstruction was a 3-D laser scanner, which is used to create a computer model.

U.S. Attorneys Wallace Kleindienst and Karen Rolley, at center, walk away from the shooting scene Tuesday in Nogales, Sonora.

Among the tools employed during the reconstruction was a 3-D laser scanner, which is used to create a computer model.

Armed with high-tech investigative equipment, personnel from the U.S. Attorney’s Office showed up Tuesday at the spot on a Nogales, Sonora street where a teenager was shot dead by at least one U.S. Border Patrol agent.

The timing of their arrival, more than 22 months after the shooting of 16-year-old Jose Antonio Elena Rodriguez, begged the question: Why now?

Department of Justice spokesman Cosme Lopez declined to answer questions about Tuesday’s scene reconstruction, including whether it was the first time investigators had gone to Nogales, Sonora for this case.

But James Lyall, staff attorney with the ACLU of Arizona, saw a possible connection to the lawsuit that his organization helped the Elena family file last month against the Border Patrol.

“I don’t think that timing was necessarily coincidental,” Lyall said. “Certainly, there was nothing preventing them from doing this many months ago. I think it’s an open question as to why it took almost two years for this step to be taken.”

Elena Rodriguez was shot Oct. 10, 2012 by an agent or agents who were positioned behind the border fence in Nogales, Ariz. during a rock-throwing incident that followed an alleged drug-smuggling attempt at West International Street. An autopsy report from Mexican authorities obtained by the NI indicated Elena Rodriguez was shot as many as 10 times, with all but one bullet entering from the back.

On Tuesday, Assistant U.S. Attorneys Wallace Kleindienst and Karen Rolley joined their counterparts at the Mexican Attorney General’s Office (PGR, by its initials in Spanish) in examining the spot on Calle Internacional where Elena was shot. Also on hand were personnel from the Department of Homeland Security and FBI.

Manuel Iniguez Lopez, the lawyer representing the Elena family in Mexico, said Tuesday’s examination was long overdue and marked the first time Mexican and U.S. authorities had worked together to investigate the crime scene.

“They’re here to reconstruct the events of that night and what they’re going to see is that Elena had no involvement with respect to the (throwing of) rocks,” he said.

Yellow police tape cordoned off the area along Calle Internacional while Nogales, Sonora municipal police stood guard, occasionally yelling at pedestrians who stepped under the tape as they ran their daily errands.

While members of the Elena Rodriguez family and rights activists looked on, PGR officers appeared to explain the circumstances of the shooting to the U.S. investigators.

They pointed up to the U.S. Customs and Border Protection camera tower that overlooks the area from a hill rising approximately 25 feet from the street on the Sonora side. And they gestured to the bullet holes that mark the wall behind where Elena Rodriguez died. One man appeared to be taking samples of the ground near where the body was found.

Among the tools employed during the reconstruction was a 3-D laser scanner, which is used to create a computer model of the area so investigators and prosecutors can refer to it in the future.

“It’s obvious what happened. They shot him from up there and left him in his own blood on the street. What do they need to check?” said Araceli Rodriguez, Elena Rodriguez’s mother, as she watched the investigators work on Tuesday afternoon.

On July 29, Elena Rodriguez’s family and the ACLU filed suit against the Border Patrol in U.S. District Court, alleging that the agents who shot him violated the guarantees of the Fourth and Fifth Amendments.

The arrival of the U.S. investigators also came just days after the Center for Investigative Reporting published a report in which James Tomsheck, former head of U.S. Customs and Border Protection’s internal affairs unit, said at least seven of the 28 fatal shootings involving Border Patrol agents since 2010 are “highly suspect.”

“In nearly every instance, there was an effort by Border Patrol leadership to make a case to justify the shooting versus doing a genuine, appropriate review of the information and facts at hand,” Tomsheck told the CIR.

The shooting scene reconstruction on Tuesday, however, was led by prosecutors from the U.S. Attorney’s Office, not by CBP Internal Affairs. And two of the prosecutors on hand – Kleindienst and Rolley – have proven records in cases involving high-profile shootings, as well as those involving the Border Patrol.

Kleindienst led the prosecution of Jared Loughner, the man convicted of 19 felony charges in connection with the assassination attempt against Congresswoman Gabrielle Giffords that left six people dead and 13 wounded at a Tucson Safeway in January 2011.

The plea deal that Kleindienst negotiated with Loughner resulted in a punishment of seven consecutive life terms plus 140 years in prison, but spared Loughner from the death penalty.

A story in the Jan. 25, 2011 Arizona Republic previewing the Loughner prosecution called Kleindienst “a tenacious federal prosecutor known for meticulous investigations, a straight-laced style and a strong courtroom presence in cases big and small.”

For her part, Rolley led the successful prosecution of Border Patrol Agents Dario Castillo and Ramon Zuniga in 2013.

The agents were convicted by federal jury in Tucson of violating the civil rights of four undocumented Mexican men by forcing the suspected smugglers to chew marijuana and sending them off shoeless and jacketless into the desert on a chilly night.

Castillo and Zuniga were each sentenced in November 2013 to two years in federal prison.

The U.S. Attorney’s investigation is an “important step,” said Lyall, the ACLU lawyer, but “it’s anyone’s guess as to what, if any, outcome will result.”

Sean Chapman, the lawyer representing at least one agent involved in the shooting, did not immediately return a request for comment.

Federal authorities have offered little information on the circumstances surrounding the shooting or the subsequent investigation into it. But reports from Nogales Police Department officers who were at the scene show that Elena Rodriguez was shot after unidentified suspects in Sonora began throwing rocks over the fence as Border Patrol agents tried to talk two smuggling suspects off the top of the barrier.

Neither of the two NPD officers who wrote reports said they saw the rock-throwers or shooting.

Correction: An earlier version of this story understated the number of months between the shooting and the arrival of the investigators.