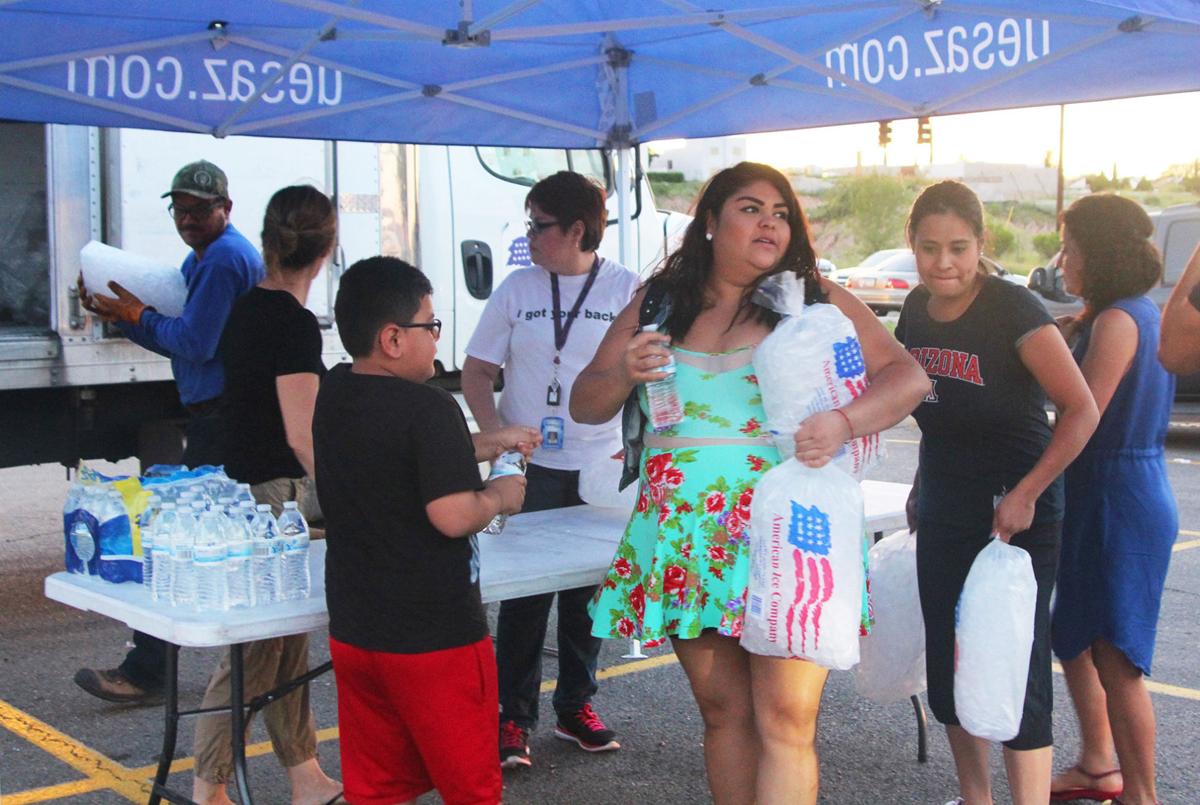 A steady stream of Nogales residents showed up to receive ice and water bottles at Walmart on Friday in advance of the outage. 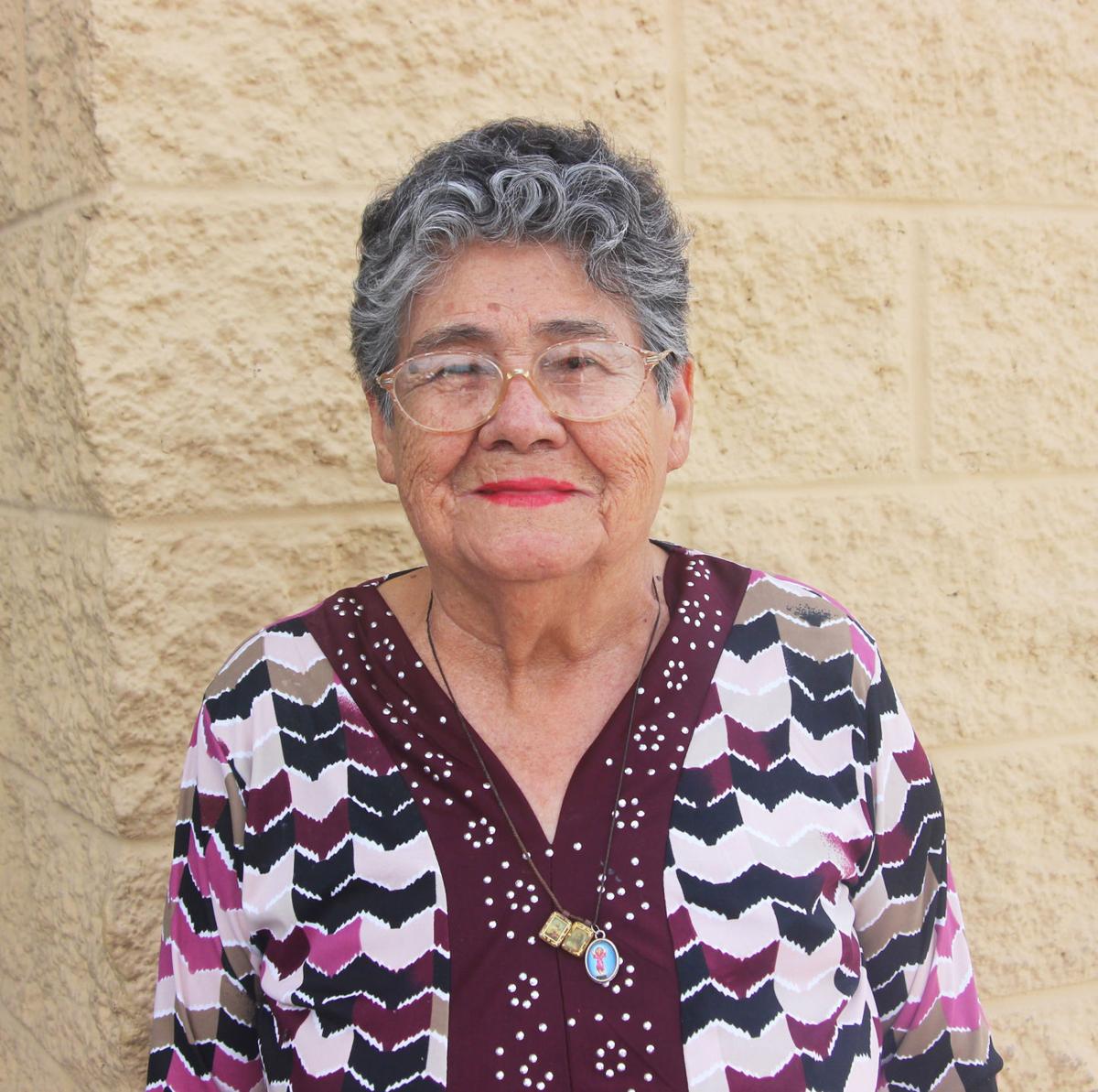 Esther Bolivar, 81, said she enjoyed seeing the beautiful stars during the blackout. 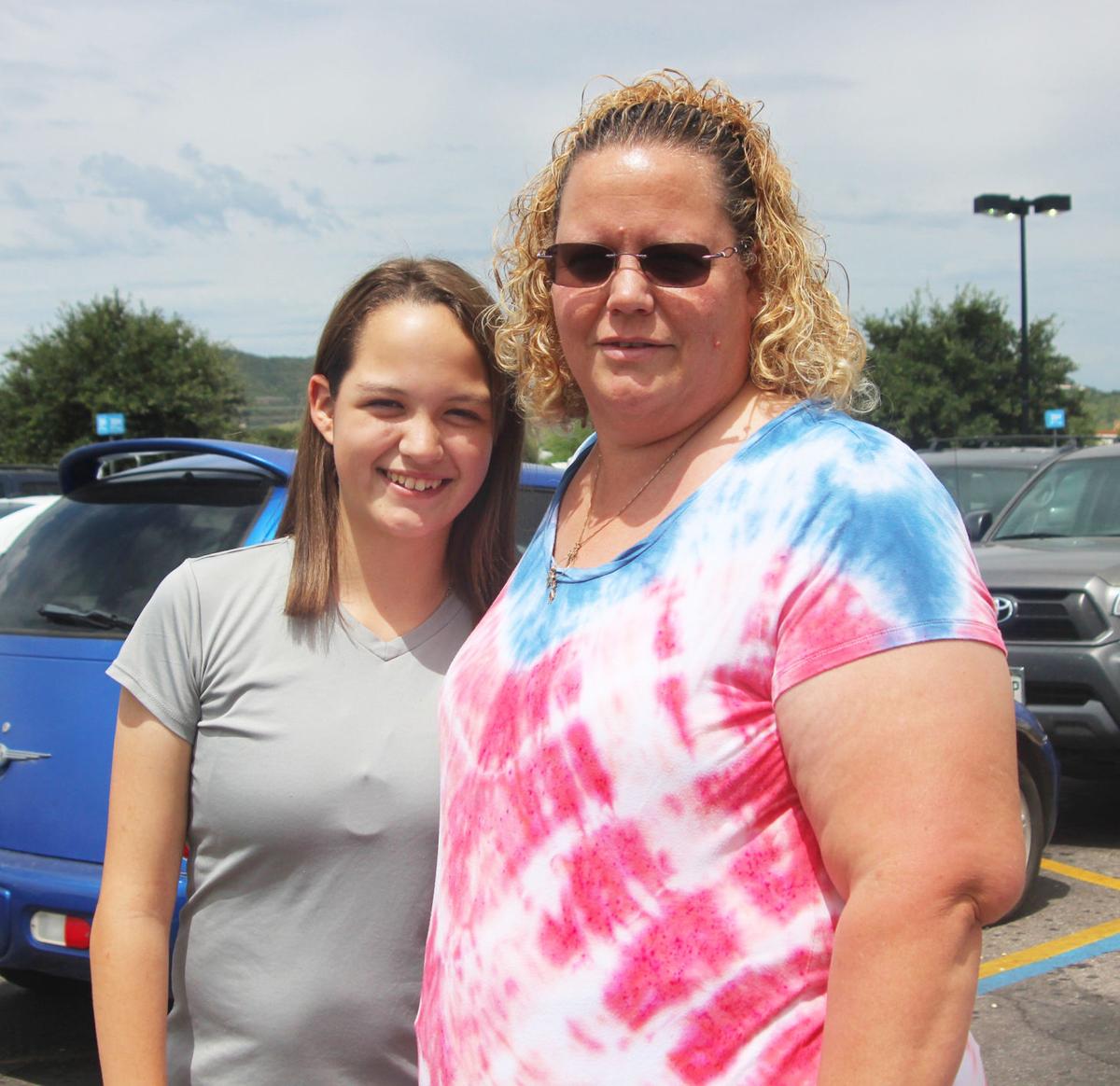 Austin Maytorena, 14, standing next to her mother Nancy, said she had trouble sleeping in the complete darkness, but it wasn’t too hot. 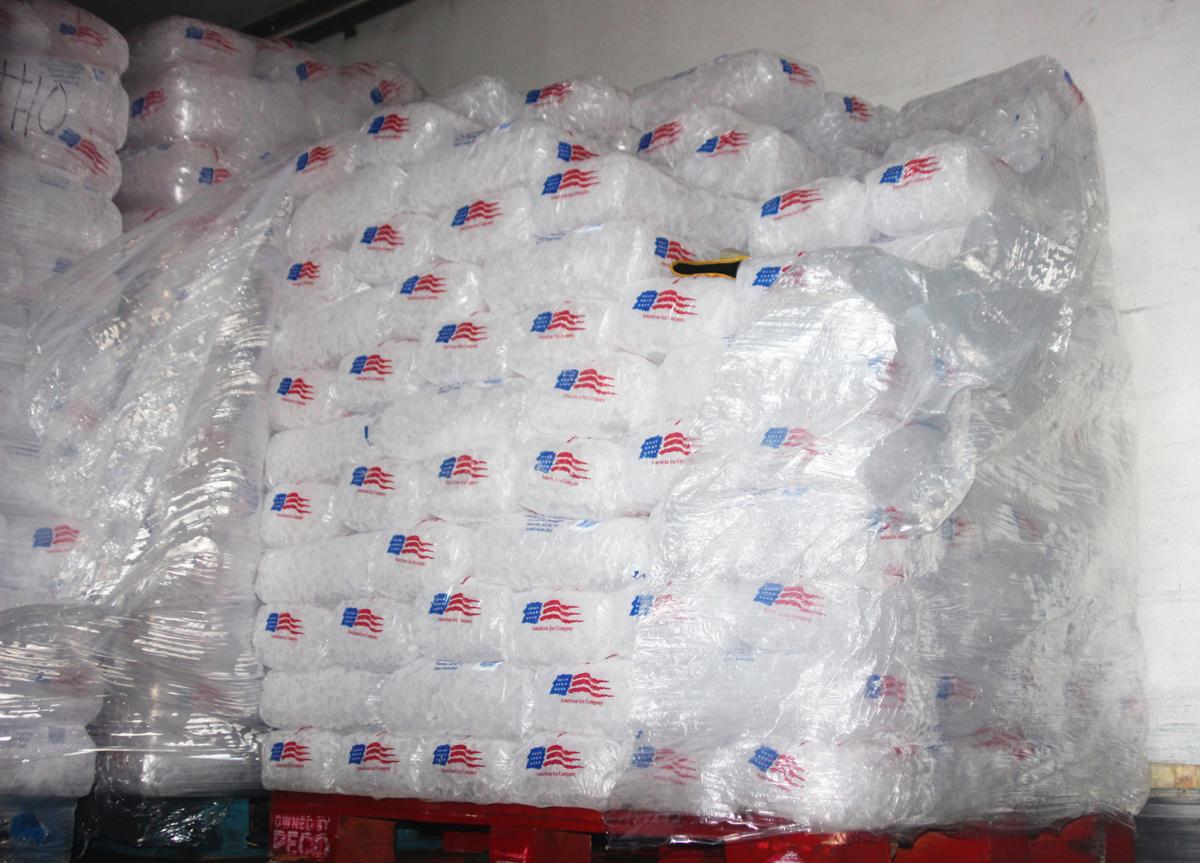 A truck full of ice that was distributed at Walmart on Friday before the power outage.

A steady stream of Nogales residents showed up to receive ice and water bottles at Walmart on Friday in advance of the outage.

Esther Bolivar, 81, said she enjoyed seeing the beautiful stars during the blackout.

Austin Maytorena, 14, standing next to her mother Nancy, said she had trouble sleeping in the complete darkness, but it wasn’t too hot.

A truck full of ice that was distributed at Walmart on Friday before the power outage.

Nogalians sweated, fretted, slept and stargazed through a planned overnight power outage last weekend that appeared to cause as much consternation over its last-minute announcement as for the inconvenience it caused.

Air conditioners and fans came to a halt and lights collectively went out just after 10 p.m. on Friday, leaving much of the city in complete darkness on a relatively humid night with temperatures around 70. The planned power outage by UniSource Energy Services impacted 7,100 households and businesses as well as outdoor lighting such as street lamps, said company spokesman Joe Barrios.

The power turned back on around 3:30 a.m., two-and-half-hours earlier than anticipated.

Noon Street resident Gilberto Guevara’s only complaint was that it was “a little hot” without any air conditioning or fans. Guevara, 66, said keeping his windows open helped him sleep through the night. Austin Maytorena, 14, who lives with her family on Crawford Street, said she had trouble sleeping in the pitch black and was thankful to have a flashlight to grab a snack in the middle of the night.

Some residents, like 81-year-old Esther Bolivar, even enjoyed the blackout. Bolivar, who lives near Camp Little Park off Western Avenue, said thanks to a lack of artificial lighting, she was able to see beautiful stars when she woke up in the middle of the night.

The experience was more stressful for Nogales resident Laura Perez-Abreu, 48, who said that after learning about the outage Thursday afternoon via Facebook, she spent all day Friday preparing and making phone calls to ensure her parents, both in their 80s, would be OK. She said her father uses an oxygen machine and her mother uses a device to take medicine every four hours.

She said she wished UniSource would have alerted the public about the outage at least one week in advance, but the evening “was less worrisome then what I thought ... because it didn’t last as long as I thought it would.” Perez-Abreu said she found an oxygen tank for her father and her mother was OK with a five-and-a-half-hour gap between her medicine, but she wasn’t sure how she would have handled the predicted eight-hour blackout.

Other residents and business owners expressed anger and anxiety ahead of the event about such a long outage occurring in the summer heat and with little notice.

Many learned about the blackout the afternoon before it happened, when the NI published a short advisory on its webpage with links posted to Facebook and Twitter.

Responding to the post on Facebook, April Silva wrote: “This is crazy, they’re letting us know the evening before?” Adelice Legleu added: “What a way to kill our town’s Friday night business,” and wondered why it couldn’t have been done on a Monday night instead.

The NI heard of the pending outage from a third party at around noon Thursday, then contacted UniSource, which took several hours before calling back to confirm. Barrios, the company spokesman, later told the reporter of this story that he hadn’t planned on contacting the newspaper.

UniSource eventually alerted the public to the outage through social media, its website and app, and by contacting the La Maxima radio station, Barrios said.

Asked why the company didn’t alert the public more in advance, he said: “We delayed our announcement out of concern for public safety, which was something that we have discussed with elected officials and first responders when we were notifying them of our plans over the past few weeks.”

He added that those elected officials and first responders did not request that UniSource handle the situation differently.

By “public safety,” Barrios said, he was referring to the possibility of criminals taking advantage of a planned power outage.

“We had to balance providing information that we knew our customers wanted, with potentially putting customers in a negative situation,” he said.

There was no unusual activity nor reported break-ins to homes or businesses during the blackout, said Lt. Robert Thompson of the Nogales Police Department, who added that all traffic lights were re-set by 9:30 a.m. In advance of the outage, NPD announced via social media that it would have extra officers on duty.

The outage, Barrios said, was scheduled during the night, when less power is in demand. It was needed so workers could make repairs following a blowout at UniSource’s Valencia substation in February that left roughly 10,000 customers without power.

“They de-energized all of the equipment, they had to disconnect old equipment, connect the upgraded and repaired equipment, and perform some testing,” he said.

Tim Carter, general manager of Oasis Cinema, said he would have liked a week-long warning, rather than receiving a visit from a UniSource representative the day before. The theater had to cancel its late shows Friday and staff scrambled to get enough ice to preserve its food.

Carter predicted that the movie cancellations would mean a loss of between $200-$700.

Other local businesses including Starbucks, Walmart, Safeway and McDonald’s posted signs Friday notifying customers that they would have to close early because of the outage.

At City Salads, server Claudia Robles said the late warning at least let chefs know to make fewer pre-prepared salad ingredients so the restaurant wouldn’t have to throw away as much food.

Starting at 5 p.m. Friday, UniSource distributed free ice – up to two bags per person – in the northwest corner of the Walmart parking lot.

Carondelet Holy Cross Hospital received a warning from UniSource earlier last week, which was enough time to make sure it had extra electricians on site as it transitioned to its own power generators to maintain normal operations throughout the outage, said Dina Sanchez, director of planning and community relations, on Friday.

U.S. Customs and Border Protection also continued its 24-hour operations at the Dennis DeConcini Port of Entry without interruption, a spokeswoman said Friday.