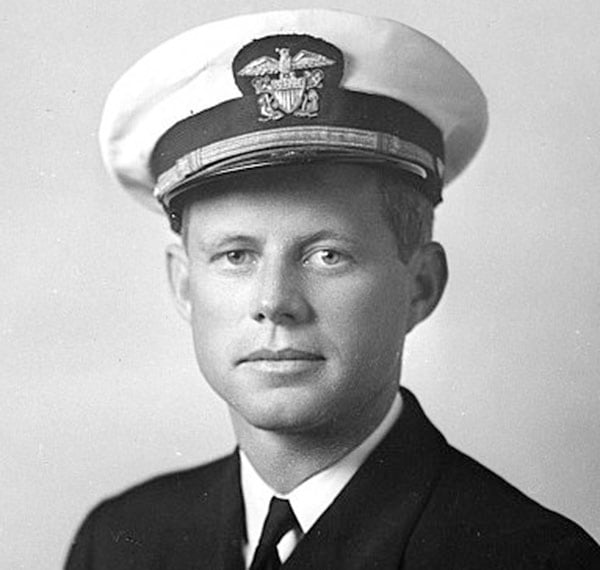 Navy Lt. John F. Kennedy in 1942, during the period of his life in which he and Inga Arvad were close. 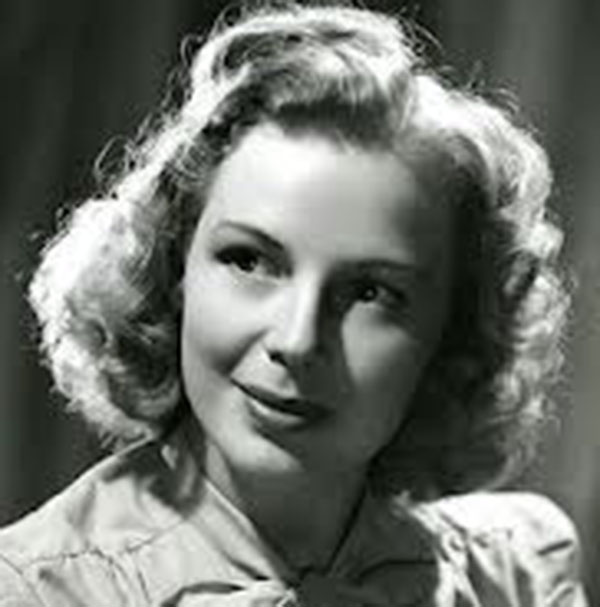 Inga Arvad was born in Copenhagen, Denmark and eventually settled in Nogales.

Navy Lt. John F. Kennedy in 1942, during the period of his life in which he and Inga Arvad were close.

Inga Arvad was born in Copenhagen, Denmark and eventually settled in Nogales.

About noon on Friday, Nov. 22, 1963, Inga Arvad McCoy drove anxiously to the Nogales Herald to see if the news was true.

As a staff writer for the Herald, Inga knew the office well and headed straight for the clacking Associated Press teletype machine. Paper piled up on the machine while the newspaper’s publisher Alvin Sisk tried to make sense of the exploding story coming out of Dallas.

President John F. Kennedy had been shot. His open Lincoln limousine sped to Parkland Hospital and the president was rushed into the emergency room.

As the teletype continued clacking and paper pushed up and out of the machine, Inga sorted through the rolls and found the words she feared most: President Kennedy was pronounced dead at 1 p.m. Central Standard Time. Inga dropped the AP bulletins and walked speechless and expressionless to her car. The dream had ended. In 1942, John Fitzgerald Kennedy, then 24, and Inga Arvad, 29, had been lovers.

Inga was a journalist, but her life’s ambition was to have a loving husband and children, which she achieved in 1946 when she met and married cowboy film star Timothy “Tim” John Fitzgerald McCoy, 22 years her senior. In November 1961, with their two sons, Ron and Terry, the McCoys moved to Nogales.

Tim McCoy planned to build Tim McCoy’s Wild West Arena featuring a variety of Western shows on part of what had been Pete Kitchen’s El Potrero Ranch. The arena was not to be, but he completed their home “Los Arcos” in August 1962.

Inga, in Washington, D.C. journalism, and Tim, in Hollywood films, had known many famous people and traveled far and wide. But the Nogales weather, lifestyle and people offered the atmosphere they desired for raising their two sons.

In 1935, the Danish-born Inga, with ambitions to be a journalist, managed to get an interview with Adolph Hitler, who described her as the “perfect Nordic beauty.” She continued reporting from Berlin and was invited by Hitler to be his guest at the 1936 Olympics in Munich where they were photographed together.

However, when Inga was asked by the German Foreign Ministry to spy for them in Paris, she refused and decided it was time to leave the country. Packed in her suitcase on top of her clothing as she boarded a train was a signed photograph of Adolph Hitler, which facilitated her safe passage out of Nazidom.

Eventually, Inga arrived in New York, where she enrolled in the Colombia School of Journalism. She was also fleeing her husband, Paul Fejos. She didn’t love him but he continued to pursue her, to the extent that he hired a private detective to follow her. If that wasn’t enough, J. Edgar Hoover believed she was a Nazi spy and had an agent follow her as well.

In 1941 Inga was hired by Cissy Patterson of the Washington Times Herald. Patterson in turn set up living quarters for Inga in the city’s Georgetown area with Kathleen “Kick” Kennedy, a photographer for the Times Herald whose brother John F. Kennedy – JFK – had just published his Harvard thesis, “While England Slept.”

In November 1941, Patterson assigned Inga to write a story about JFK and his new book. When Kennedy and Inga met, they were both smitten.

The romance soon became public when Washington gossip columnist Walter Winchell wrote on Jan. 12, 1942: “One of ex-ambassador Kennedy’s eligible sons is the target of a Washington gal columnist’s affections. So much so she has consulted a barrister about divorcing her exploring groom. Pa Kennedy no like.”

Since JFK was working for Naval Intelligence during wartime, the U.S. Navy became concerned about allegations of Inga being a spy and put a tail on her. Now three investigators followed Inga and Kennedy.

Inga’s marriage to Fejos had been over for a long time and in her letters, she wrote JFK that meeting him made up her mind: she wanted a divorce.

Soon after Winchell’s article, Kennedy was moved to Charleston, S.C. at the instigation of “Pa Kennedy,” or Joe Kennedy, who wanted his son away from the alleged Nazi spy. Inga wrote JFK a lonely letter on Jan. 19 recalling their many dinners of soup, steak, mashed potatoes, green peas, carrots and ice cream – evidently JFK’s favorite.

Inga traveled to Charleston on Feb. 6 and met JFK at the Fort Sumter Hotel, where she registered as Barbara White. Neither knew that the FBI had bugged their hotel room.

Inga’s telephone in Washington was tapped as well. On Feb. 19, Kennedy phoned her and asked her to come back to Charleston. The following day she checked into the Francis Marion Hotel under the name of Barbara Smith. But that didn’t fool the FBI, who again bugged the hotel room.

Joe Kennedy planned that his eldest son Joe Kennedy, Jr. would enter politics and eventually run for president. The political bug had bitten JFK as well. Inga wrote in her letter of Feb. 23, 1942 about getting permission from Patterson to go to Reno, Nev. She also expressed her appreciation to Jack for his gift of two hurricane lamps that became her prized possessions.

Then she wrote: “Put a match to the smoldering ambition and you will go like wild fire.”

In other letters, Inga describes her wish for a quiet life. A ranch out West held some appeal for JFK, but he maintained his “smoldering ambition” for the White House.

If the pressure from “Pa” Kennedy and Hoover wasn’t enough, their unshared vision of the future made it clear they could never have a permanent relationship. Nonetheless, they remained in touch and saw each other as often as possible.

Much history has been written that after Joe Kennedy, Jr. died in a bomber explosion in August 1944 that Joe Kennedy, Sr. forced an uneager JFK into politics. In those accounts, JFK had ambitions of writing or teaching – not politics. Inga’s letters make clear that two years before his brother’s death, JFK had political ambitions for the White House and those ambitions were strictly his own.

Inga left for Reno in March of 1942 and, after many weeks, finally got her divorce. JFK spent most of April and May 1942 in the Naval Hospital in Charleston and later Chelsea, Mass., which worried Inga. She wrote asking him to call.

Inga wrote on May 25, 1942: “Last night there was a hard knock on the door. The janitor came in and said somebody wants a person called Inga-Binga. Is that your married name? I looked puzzled and went to the phone and a very optimistic voice said, ‘Will you pay a collect call from John F. Kennedy in Chelsea, Mass.?’” Four days later, JFK celebrated his 25th birthday.

Their love affair, at least as something permanent, was over. Kennedy went for more Naval training and by December 1942 was in the Pacific. Inga returned to Washington, but eventually moved to Hollywood to help columnist Sheila Graham, and lover of author F. Scott Fitzgerald, with her gossip column. Inga and Jack continued to write. He wrote from the Pacific:

“Inga Binga, I’ll be glad to see you again... that if I had lived to be a hundred, I could only have improved the quantity of my life, not the quality. This sounds gloomy as hell. I’ll cut it. You are the only person I’m saying it to. As a matter of fact knowing you has been the brightest point in an already bright twenty-six years…”

Upon arriving in California, JFK stayed with Inga for a few days and she wrote a major news story about the young Navy hero.

In 1946, Inga met McCoy and found the loving husband she had been seeking. The couple had two children and by 1961 had the little ranch just outside Nogales.

In time, the McCoys became close friends of my parents, Louise and Walter Holm. Throughout the 1960s, we were frequently at their home, Los Arcos, or they were at our home on Pajarito Street.

My mother and Inga became very close friends, attending social events or shopping together and mom had many stories about their time together and what a “character” Inga was. Inga was open and frank, and my mother admired her directness.

But she said nothing about JFK. Only when I asked to use the bathroom at Los Arcos and walked through her bedroom did I see a photo of JFK signed, “To dearest Inga Binga, love Jack.”

I said, “Mrs. McCoy, I didn’t know you knew John Kennedy!” To which she replied, “He was president of the United States, dahling, lots of people knew him.”

According to Sisk, the Nogales Herald publisher, President Kennedy once ordered Air Force One to land at Davis-Monthan in Tucson for a pre-arranged meeting with Inga. There were also rumors about telephone calls from the White House. It might be true, but I have found no proof.

It is likely they continued to share their dreams. Who knows? Maybe phone records or flight logs of Air Force One contain evidence.

JFK’s dream ended with his assassination in Dallas on Nov. 22, 1963 – 50 years ago today. Inga died in 1973 in Nogales, where she found her dream after encouraging her former lover to pursue his: to become president of the United States.

(Holm is a life-long resident of Nogales and local historian.)