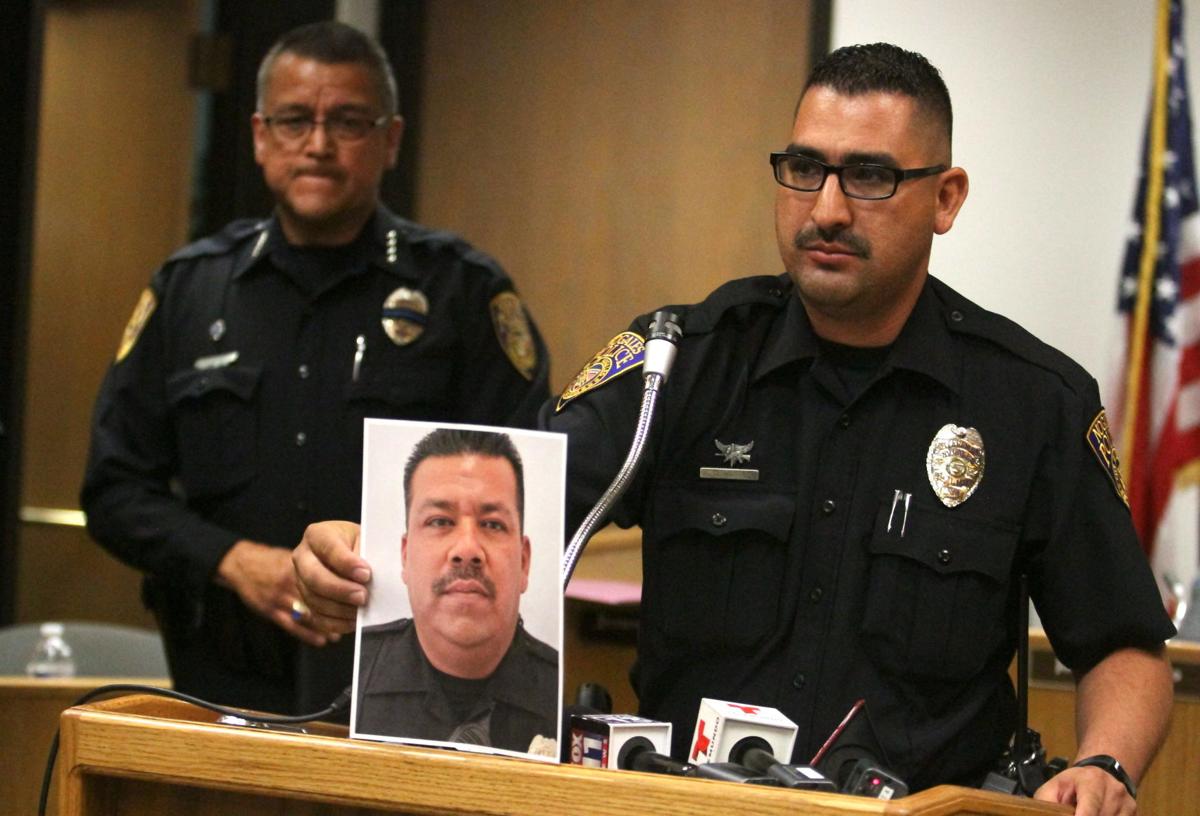 Officer Oscar Mesta of the Nogales Police Department shows members of the media a photo of Office Jesus Cordova during a news conference Friday night at City Hall as NPD Chief Roy Bermudez looks on. 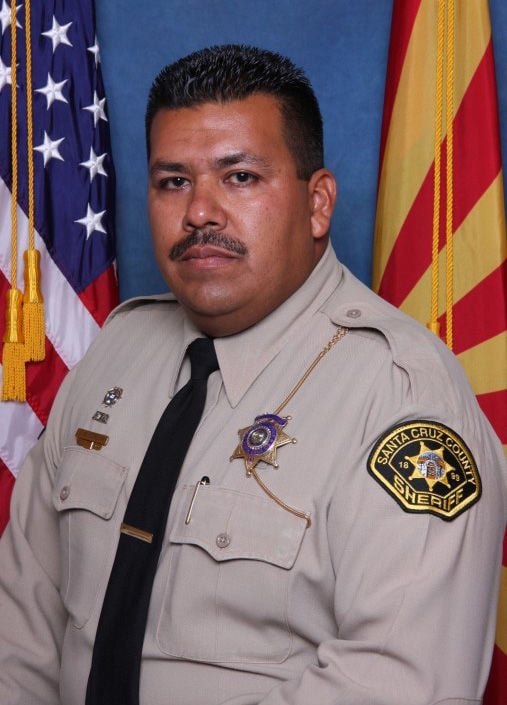 Jesus Cordova, seen here in 2011 when he worked as a deputy for the Santa Cruz County Sheriff’s Office. 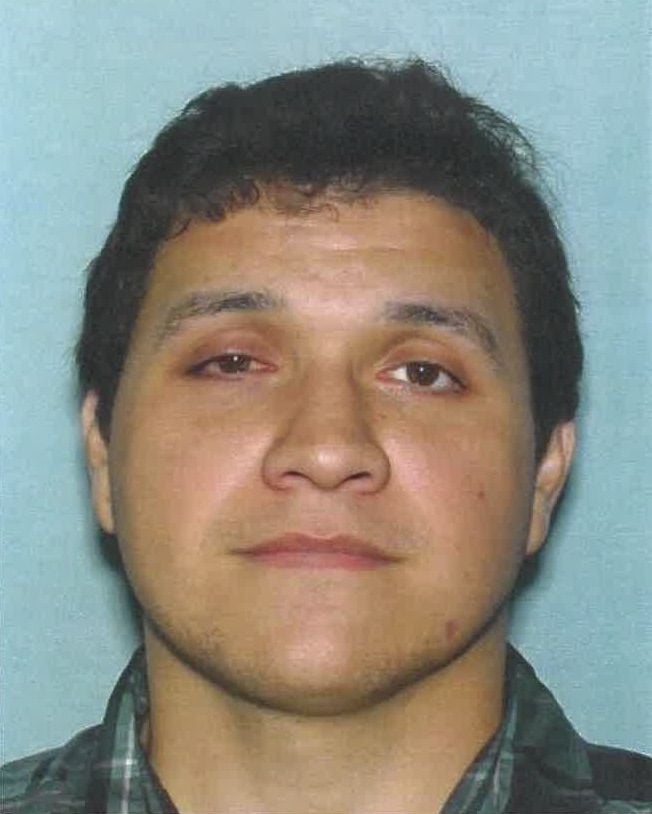 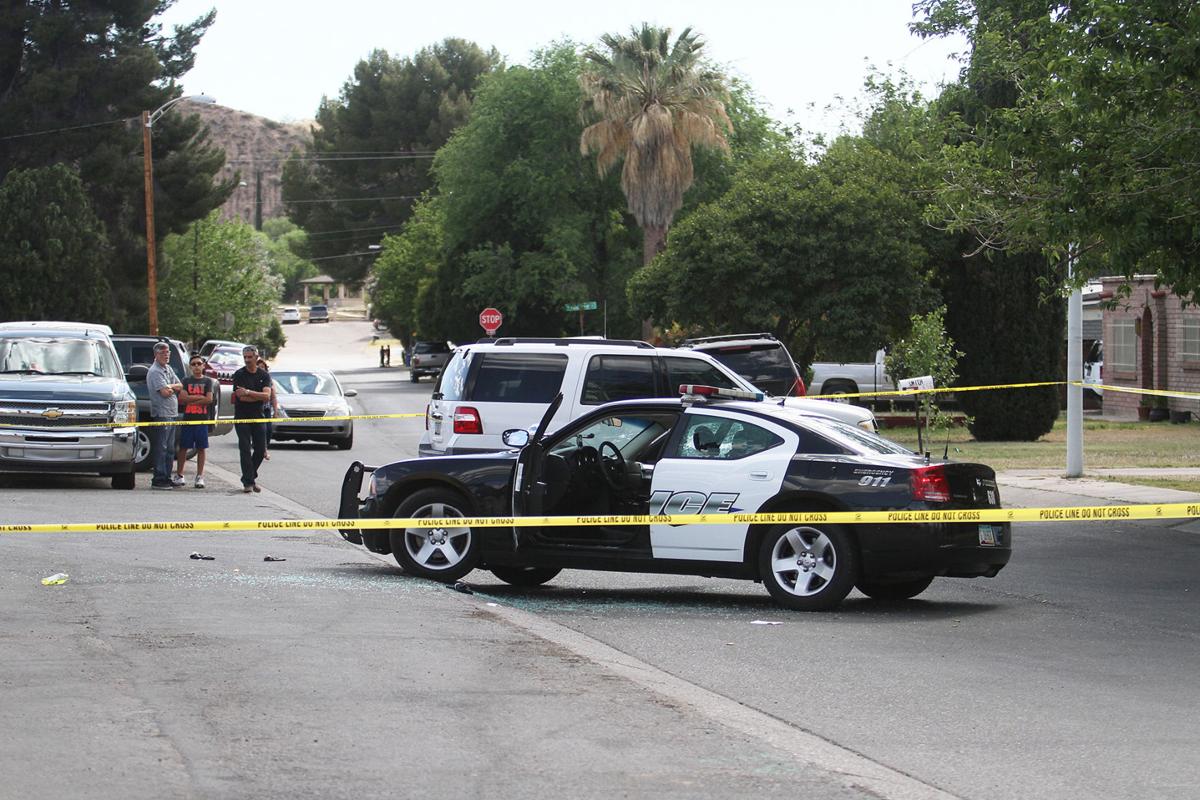 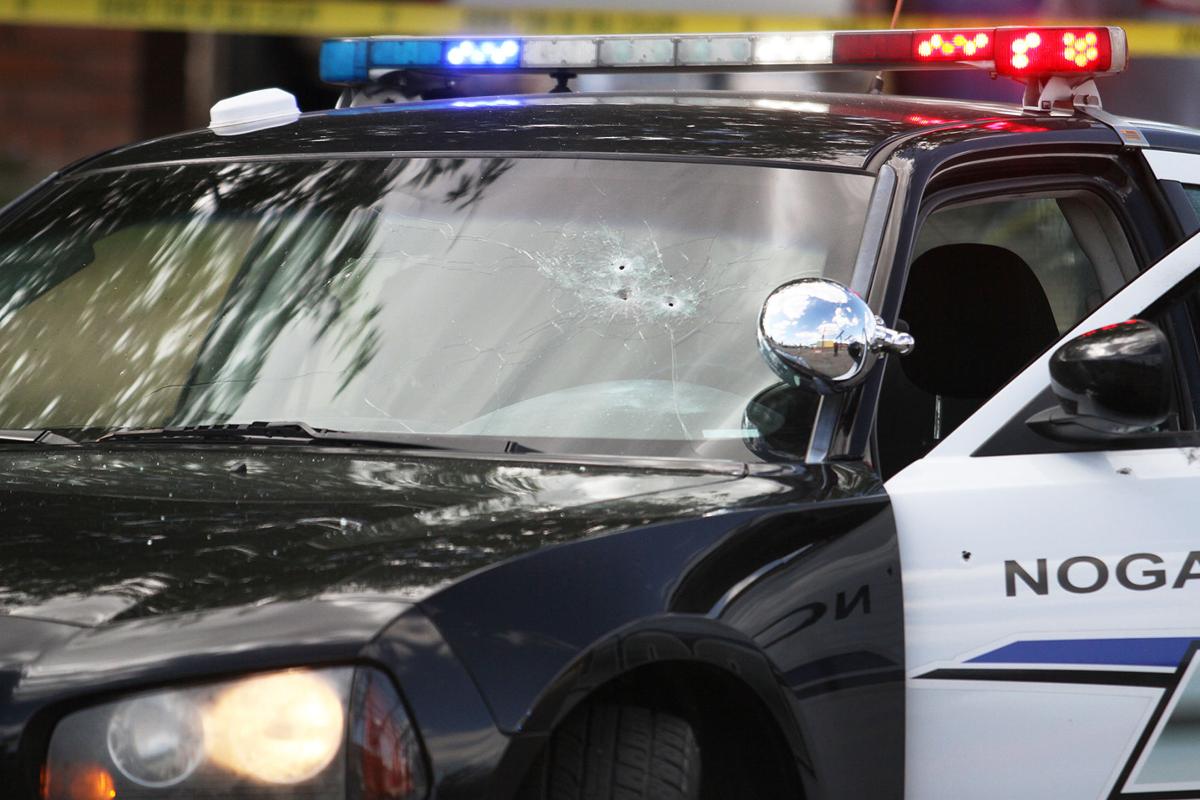 Bullet holes are seen in the windshield of the officer’s car. 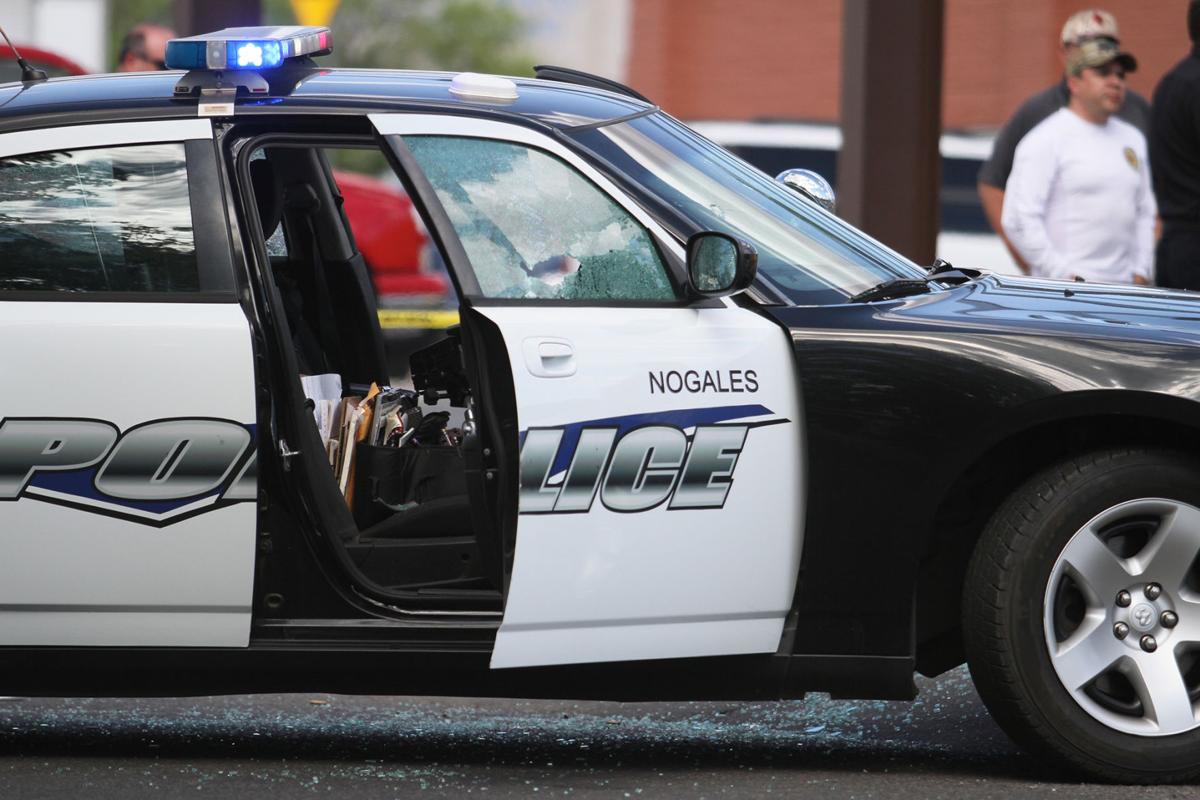 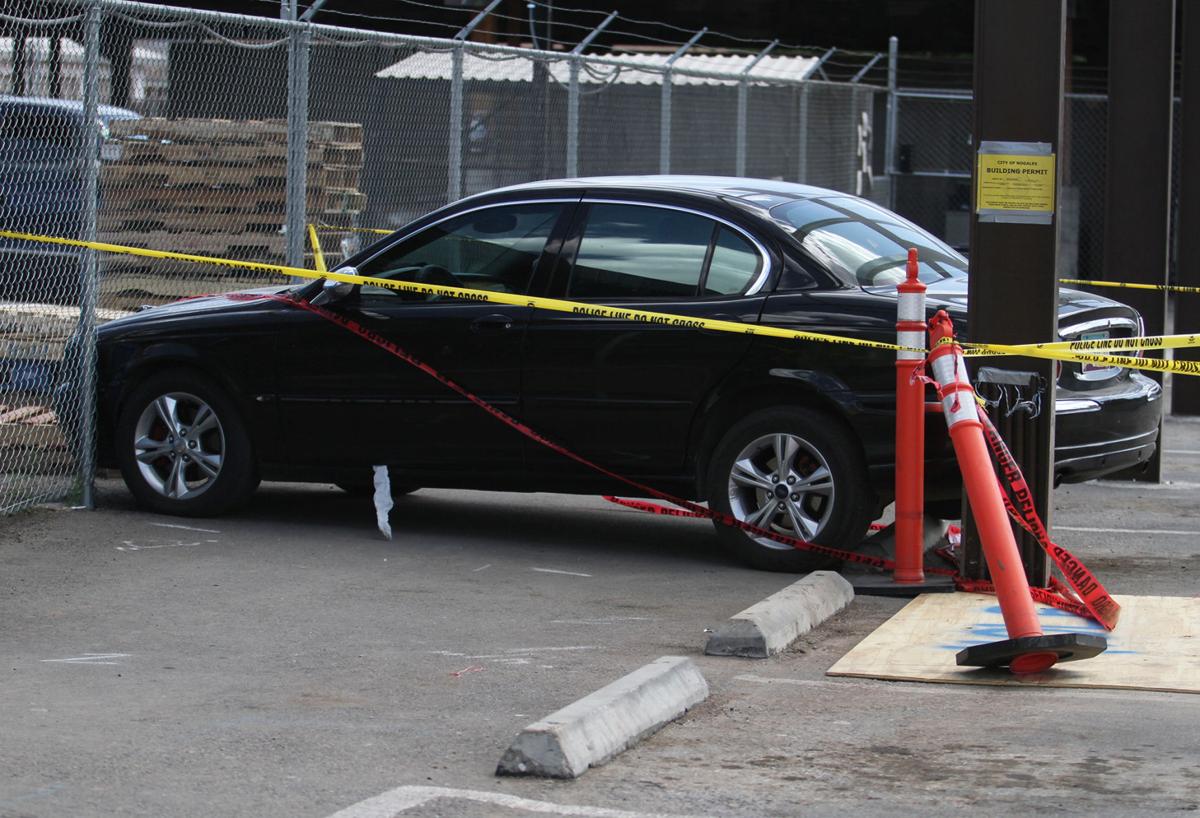 The car that was initially carjacked by the suspect was abandoned and rolled into a fence at Villa’s Market.

Officer Oscar Mesta of the Nogales Police Department shows members of the media a photo of Office Jesus Cordova during a news conference Friday night at City Hall as NPD Chief Roy Bermudez looks on.

Jesus Cordova, seen here in 2011 when he worked as a deputy for the Santa Cruz County Sheriff’s Office.

Bullet holes are seen in the windshield of the officer’s car.

The car that was initially carjacked by the suspect was abandoned and rolled into a fence at Villa’s Market.

Officer Jesus Cordova of the Nogales Police Department was shot and killed Friday afternoon, April 27, by a suspected carjacker who was later taken into custody after two additional carjackings and a standoff with police at a trailer park.

Cordova, a 44-year-old father of three who leaves behind a wife who is five months pregnant, joined NPD approximately a year ago after serving with the Santa Cruz County Sheriff’s Office for 11 years.

Bermudez declined to name the suspect in the killing during the news conference, saying he wasn’t “going to give him the time of day to talk about him on television.” But Officer Oscar Mesta, a department spokesman, confirmed afterward that the man accused of killing Cordova was 28-year-old David Ernesto Murillo, a resident of Tempe with ties to the local area.

Bermudez said Murillo shot Cordova after the officer responded to the 2900 block of North Grand Avenue at approximately 2:41 p.m. to investigate a report of an armed carjacking. According to a timeline detailed first by Lt. Carlos Jimenez at the shooting scene, and then by Bermudez at the news conference, the events unfolded this way:

• Cordova spotted the suspect vehicle and attempted a traffic stop at North Grand Avenue and Mesa Verde Drive, in front of Villa’s Market. “The suspect then exited his car and fired shots at the officer, striking the officer various times,” Bermudez said.

• After shooting Cordova, Murillo carjacked a white pickup truck from a customer at Villa’s. County Manager Jennifer St. John later confirmed that the truck was a Santa Cruz County vehicle.

• Pursuing law enforcement agencies, which included NPD, Border Patrol, the Santa Cruz County Sheriff’s Office and U.S. Customs and Border Protection, followed Murillo to a warehouse area around Mariposa Road and Industrial Park Drive and “there possibly was some exchange of gunfire there,” Jimenez said.

• Abandoning the carjacked vehicle, Murillo fled on foot to the Mariposa Manor Trailer Park, where he was taken into custody.

Meanwhile at the shooting scene, witnesses called the authorities and Cordova was taken to the neighboring Nogales Fire Department Station 2 and picked up by a med-evac helicopter with the intention of transporting him to a Tucson hospital. However, Bermudez said during the news conference, the chopper crew had to detour to Holy Cross Hospital in an effort to stabilize Cordova, and he succumbed to his injuries there.

Bermudez thanked the Nogales Fire Department for its quick response to the situation.

“They did as much as they can to come to Officer Cordova’s aid,” he said.

Surrounded by yellow crime-scene tape at the scene of the shooting, Cordova’s patrol vehicle had three bullet holes in the windshield in front of the driver’s seat and one in front of the passenger’s seat. Both driver-side windows had been shot out, as had the window on the front passenger side. There were also bullet holes in the car’s body, including the driver-side door.

Bermudez said more than 10 bullet casings were found at the scene, and it did not appear that Cordova was able to get off any shots in his defense. It wasn’t immediately clear how many times he was hit.

Laura and Aurelio Villa of Villa’s Market said they were in their office when they heard a number of gunshots in rapid succession.

“I looked through the window and I saw the police car and the (carjacked) car right there,” Laura said, pointing to an X-type Jaguar sedan, which had crashed into a fence behind the store.

The Villas said they didn’t see the officer or suspect after hearing the gunfire.

“It’s messed up,” Aurelio Villa said of the shooting.

Jerry Smith, who lives next door to the murder scene, said he was at home when he heard five or six gunshots.

“I heard the shots and then people were coming out and they called 911 and I didn’t know what was going on,” he said.

Smith didn’t hear or see anything else related to the crime, he said.

In a video posted on Facebook that shows Murillo being arrested Mariposa Manor Trailer Park, dozens of local and federal law enforcement with weapons drawn are seen chasing a man into a fenced area behind a trailer home. Two officers soon emerge, leading a handcuffed man wearing a black shirt and khaki cargo shorts toward police vehicles, while other officers appear to continue searching the area.

The woman who shot the video, Gloria Alejandra Parra Bustamante, a 25-year-old resident of Mariposa Manor Trailer Park, said: “It was very scary because cops were really close to our house and we didn’t know what was happening.”

Parra said she was terrified that they might start shooting, but she never heard any gunfire from officers or the suspect.

She said she couldn’t believe something like this happened in Nogales, a city she described as “very peaceful.”

No other suspects were involved in the incident, NPD said.

In 2011, while working as a detective for the Santa Cruz County Sheriff’s Office, Cordova was named the Public Safety Employee of the Year by the Rio Rico Rotary Club for rescuing an elderly man who became lost on a winter night while collecting rocks. Cordova reportedly found the man entangled in a barbed wire fence.

“The victim surely would have succumbed to the elements if not for Detective Cordova’s efforts,” his nomination said.

Cordova joined the Sheriff’s Office in January 2006 and was assigned to the patrol division. On July 23, 2011, six months following the rescue of the elderly man, he was promoted to the criminal investigations division.

Bermudez called Cordova an “exemplary officer” who joined NPD in May 2017.

“I was glad to take him in because of the reputation that he had,” he said.

“We are mourning, as a department, as a community, the loss of Officer Cordova and we send thoughts and prayers to his family,” he said.

On Friday afternoon, Gov. Doug Ducey ordered that flags at all state buildings be lowered to half-staff on Monday in Cordova’s honor. Flags will also be lowered on the day of Cordova’s interment, the Governor’s Office said.

“Officer Cordova was a dedicated public servant and Arizona mourns his loss. This tragedy reminds us of the sacrifices that police officers make daily to keep our communities safe,” Ducey said in a statement. “My prayers and condolences go out to Officer Cordova’s family and loved ones and the entire Nogales community.”

Cordova’s death was the first fatal shooting of a police officer in Nogales city limits since Sgt. Manuel “Manny” Hurtado Tapia of the Arizona Department of Public Safety was shot on Jan. 7, 1991 by an 18-year-old drug runner named Noel Bernal Gonzalez. Tapia had pulled Bernal over on N. Grand Avenue near Banks Bridge while working on a surveillance operation as head of the Santa Cruz County Attorney’s Metro Task Force. Another officer who had responded to the call shot and killed Bernal.

Tapia, the father of three young children and a resident of Tumacacori, died in surgery the next morning.

Cordova was the first Nogales Police Department officer to be killed in the line of duty since Hank Frost on Jan. 1, 1888.

The Arizona Department of Public Safety is leading the investigation into Cordova’s killing, and the officer’s body was taken via police escort to the Office of the Medical Examiner in Tucson on Friday night, Bermudez said. On Monday, the body was escorted back to Nogales so that preparations for funeral services could begin.

Prior to shooting and killing Officer Jesus Cordova at the north end of Nogales on Friday afternoon, suspect David Ernesto Murillo reportedly …