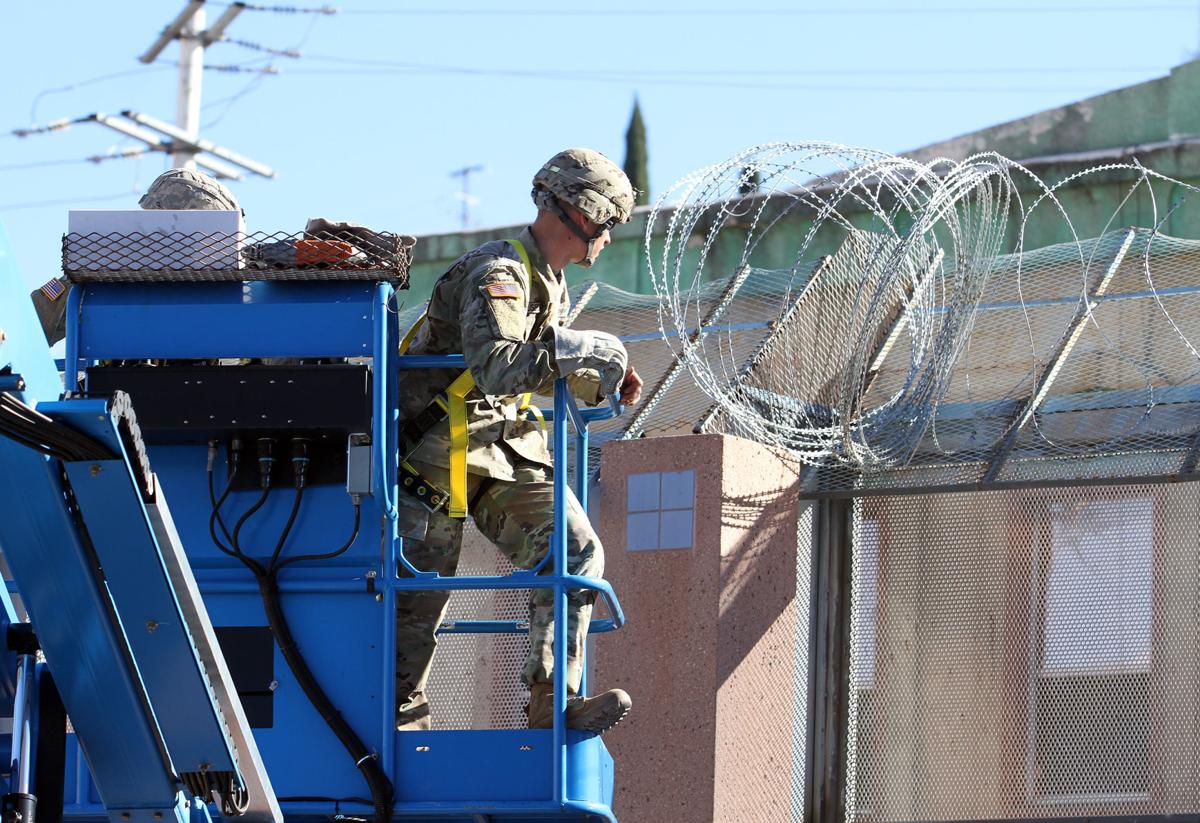 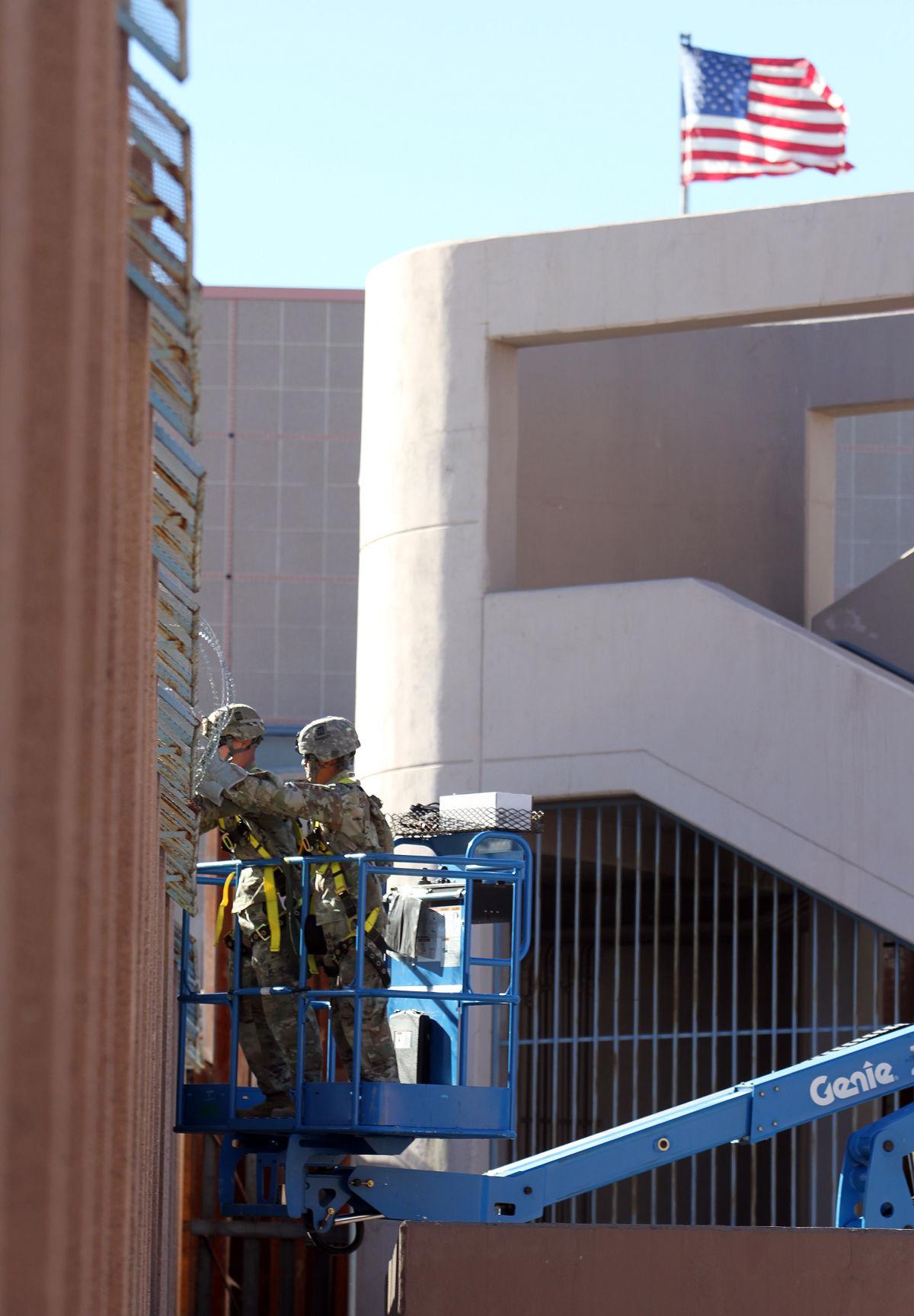 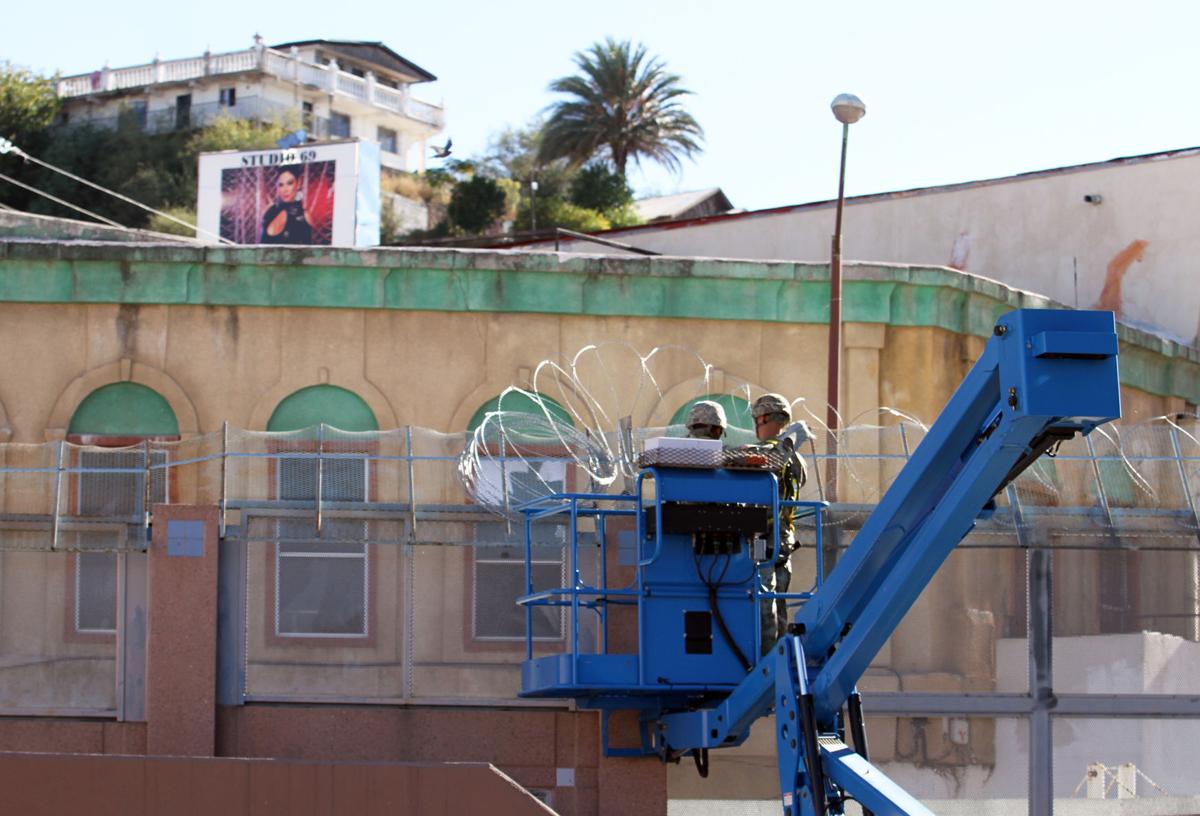 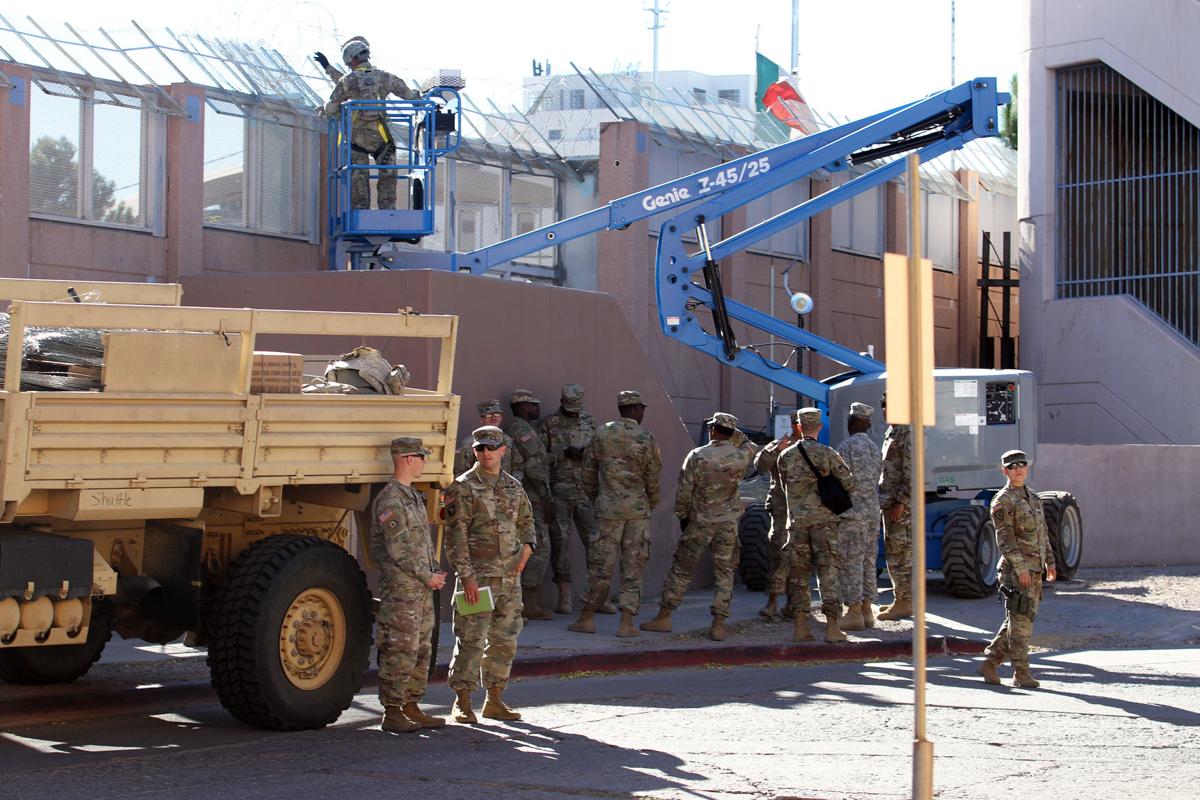 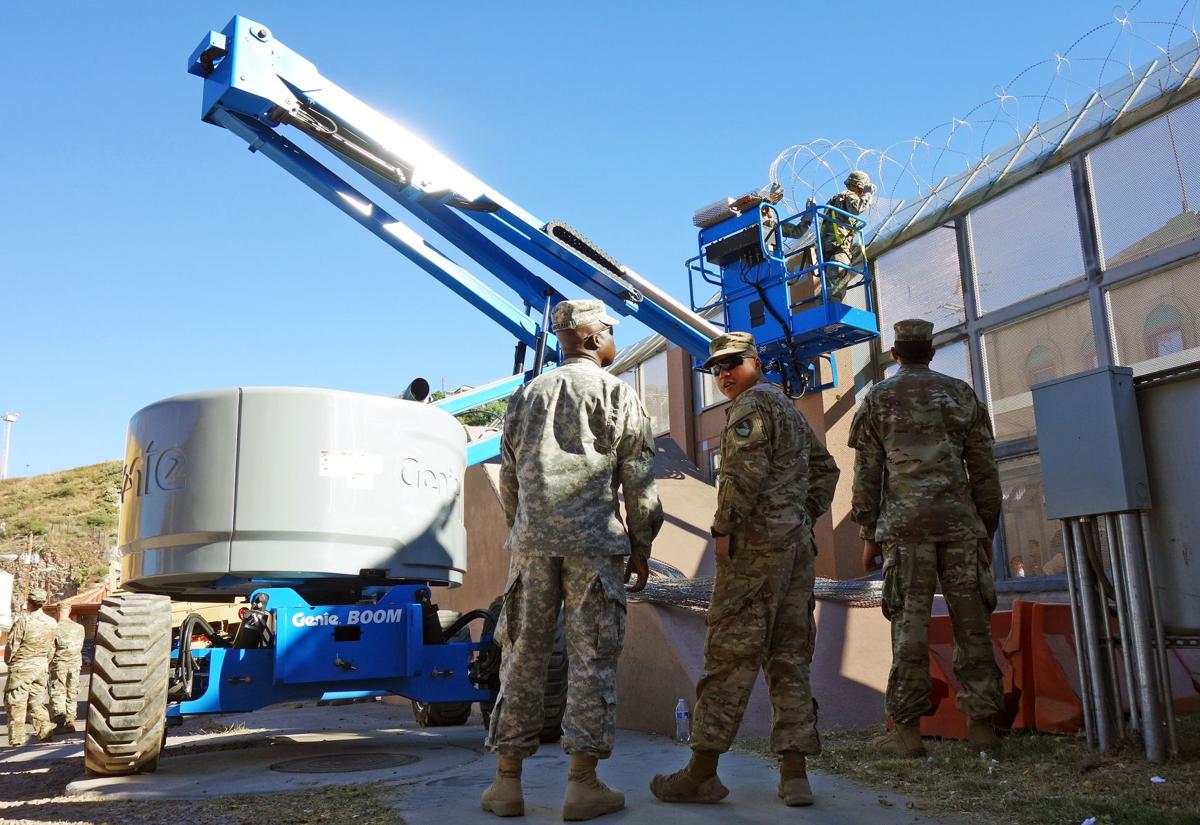 The Trump administration sprang an Election Day surprise on the people of Ambos Nogales on Tuesday, sending the U.S. military to string razor wire atop the border fence that separates the downtowns of the Arizona and Sonora sister cities, ostensibly to protect America from a caravan of impoverished asylum-seekers from Central America that’s been slowly making its way through Southern Mexico.

“Honestly, it makes me sick to my stomach and very sad and confused,” said Evan Kory, whose family owns a clothing shop on Morley Avenue, across the street from where uniformed troops were installing the concertina wire Tuesday afternoon.

“It’s just dozens of people in uniform and it's very distressing and shocking,” he said, adding: “This is definitely not right and that makes me very upset.”

By Thursday morning, the troops had installed the wire on the non-bollard fencing that extends just west of the Dennis DeConcini Port of Entry, east across the port and the Morley pedestrian crossing to the corner of East International Street and Nelson Avenue. It was not immediately clear how much additional razor wire would be put up in the city, if any.

Lifelong Nogales resident Bobby Astengo said it was hard to put his feelings into words as he watched the wire being stretched across the fence just east of the railroad crossing on Tuesday.

“I’m sad. It’s sending the wrong message.” he said. “We’re putting up serpentine wire between two border communities that have always been brother and sister. For me, it's only been one Nogales.”

In a statement provided by a spokesperson on Tuesday, U.S. Customs and Border Protection did not directly address the razor wire, but indirectly attributed the action to the federal government’s concern over the migrant caravan, which prompted the deployment of thousands of active duty troops to the U.S.-Mexico border last week.

“CBP is currently monitoring the situation regarding the caravan migrating from Central America toward the U.S. border. We continually assess the capabilities of our facilities throughout the Southwest border and have been making – and will continue to make – necessary preparations,” the statement said. “These include participating in operational readiness exercises and the mobilization of resources as needed to ensure the facilitation of lawful trade and travel.”

County Supervisor Manuel Ruiz, who represents much of Nogales, including the downtown district, said local officials were caught off guard by the wire installment.

“It would’ve been nice that before they started doing anything, if they would’ve met with the community and said, ‘This is what we’re planning to do,’” he said.

Still, Ruiz acknowledged that “it’s a federal thing, so we definitely wouldn’t have had any say.”

“I know that when they sent the National Guard, they didn’t tell us – they just did it,” he said in reference to a deployment of guard troops to the border earlier this year.

In 2013, leaders at the Border Patrol’s Nogales Station informed city officials that they were considering installing razor wire on the border fence near Short Street on the east side of town and near Hereford Drive on the west side. The plan quickly fizzled, however, following a swift backlash that included a move by the Nogales City Council to draft a formal statement of protest.

Kory and Astengo both noted the timing of Tuesday's razor wire installation, which came as Americans went to the polls to vote in local, state and federal elections. Trump’s dire warnings about the migrant caravan and the deployment of troops last week were seen by critics as political ploys meant to rile up the Republican base in advance of the midterms, and the Trump team had been running a racially charged TV ad in recent days urging citizens to “stop the caravan, vote Republican."

“One thing that’s very clear is that it’s Election Day, and the timing is incredibly transparent. It’s one last push for people with an agenda,” Kory said.

Asked if the concertina wire directly in front of his shop made him feel any safer, Kory said: “Absolutely not.”

“It’s actually causing fear in our customers, people who cross legally and spend their money and keep our town alive,” he said. “This is already one of the most secured areas. Border Patrol’s here every day and they’re very friendly and we talk to them and they do their job.”

Magdalena Monjarás Flores, a 44-year-old resident of Nogales, Sonora, crossed back into Mexico on Tuesday afternoon through the Morley pedestrian gate, just a few feet from where the U.S. troops were stringing the wire. She said she respects countries’ rights to defend themselves, but saw this measure as “very extreme.”

Monjarás, who works at a dental office just south of the U.S. border, said she crosses into Arizona almost daily for activities including shopping. The concertina wire wouldn’t make her reconsider her visits to the United States, she said, but she was still uneasy.

The Associated Press reported Monday that people at the forefront of the caravan had begun arriving in Mexico City, approximately 1,300 miles from Nogales, where they were being accommodated at a sports stadium. The AP cited estimates from Mexico’s Interior Ministry that more than 5,000 Central American migrants were currently moving through Mexico, and that more than 3,000 had applied for refugee status there or asked for assistance to return to their home countries.

It wasn’t clear how many – if any – of the migrants planned to head toward Nogales to request asylum. The Texas border is approximately 600 miles closer to Mexico City.

The aggressive and violent manner in which some members of the caravan pushed their way into Mexico from Guatemala has led to concern that similar tactics could be employed here.

“They forced themselves into Mexico, and Mexico is not doing a damn thing about it,” said Nogales resident Miguel Ronquillo, a retiree and veteran. “Of course Mexico is a lot more passive than we are. If military action has to be taken, then let’s have it.

“If they’re asking for asylum, do it legally,” he added. “Come into the office, express what your problem is and then it’s up to the government to decide if they should be allowed in or not.”

But Astengo pointed to the asylum-seeking Central American migrants who have been arriving at the south side of the Dennis DeConcini Port of Entry since the spring.

“I’ve seen some of the migrants that are seeking to ask for asylum and they’re very peaceful people that wait right across the border, they do not cross seeking that asylum, they wait in line,” he said. “I just can’t see the migrants crashing our border the way they did the Mexican border. They did it over there because they probably thought they could, and they did. I don’t know anybody brave enough to crash an American, U.S.-soil border the way they did over there.”

The troops were initially deployed to the U.S.-Mexico border as part of a mission called Operation Faithful Patriot, a name criticized for its political overtones. The Department of Defense dropped the name this week in favor of the descriptive term “border support.”

United States Northern Command on Thursday said that more than 5,600 military personnel had already been deployed to the region: 1,500 in Arizona, 2,800 in Texas and 1,300 in California. The total number was expected to surpass 7,000.

The troops were assigned to perform duties in support of U.S. Customs and Border Protection, but not to engage in law enforcement activity. Support duties include providing transportation, logistics and medical assistance, as well as installing concertina wire along the border, which soldiers have also been doing in Texas.

In its statement issued Tuesday, CBP said it planned to reinforce staffing “well in advance” of the caravan’s arrival.

“Regardless of the operational contingencies we may face, please know this: we will ensure border security – we will not allow a large group to enter the U.S. unlawfully; we will act in accordance with the highest principles of law enforcement; and we will treat intending migrants humanely and professionally at all times,” it said. “CBP’s highest priority is the safety and security of the American people, the traveling public, CBP personnel and the communities in which we serve.”

Soldiers are also extending razor wire to sections of bollard fence near the port.