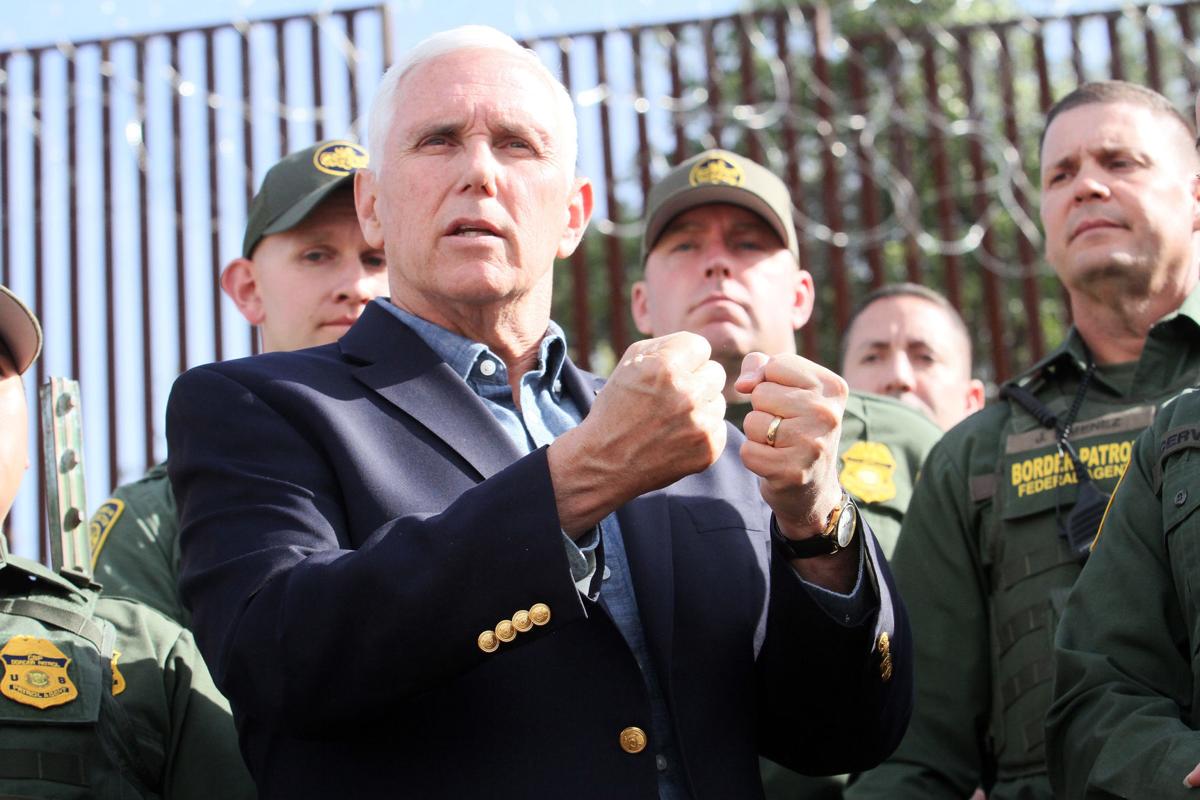 Surrounded by Border Patrol agents and with razor wire shining in the sun behind him, Vice President Mike Pence gestures while speaking to reporters in front of the border fence west of Nogales on Thursday. 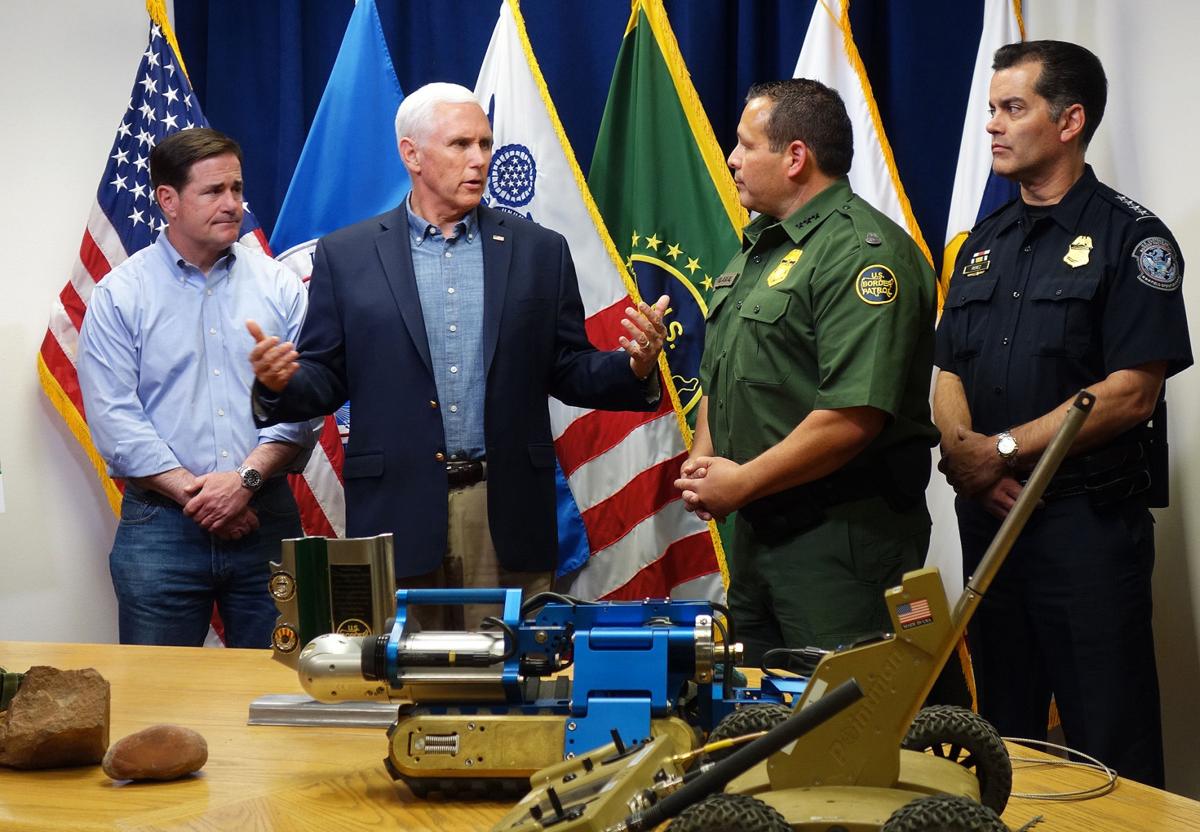 Vice President Mike Pence, with Gov. Doug Ducey at left, speaks during a briefing at the Nogales Border Patrol Station on Thursday. 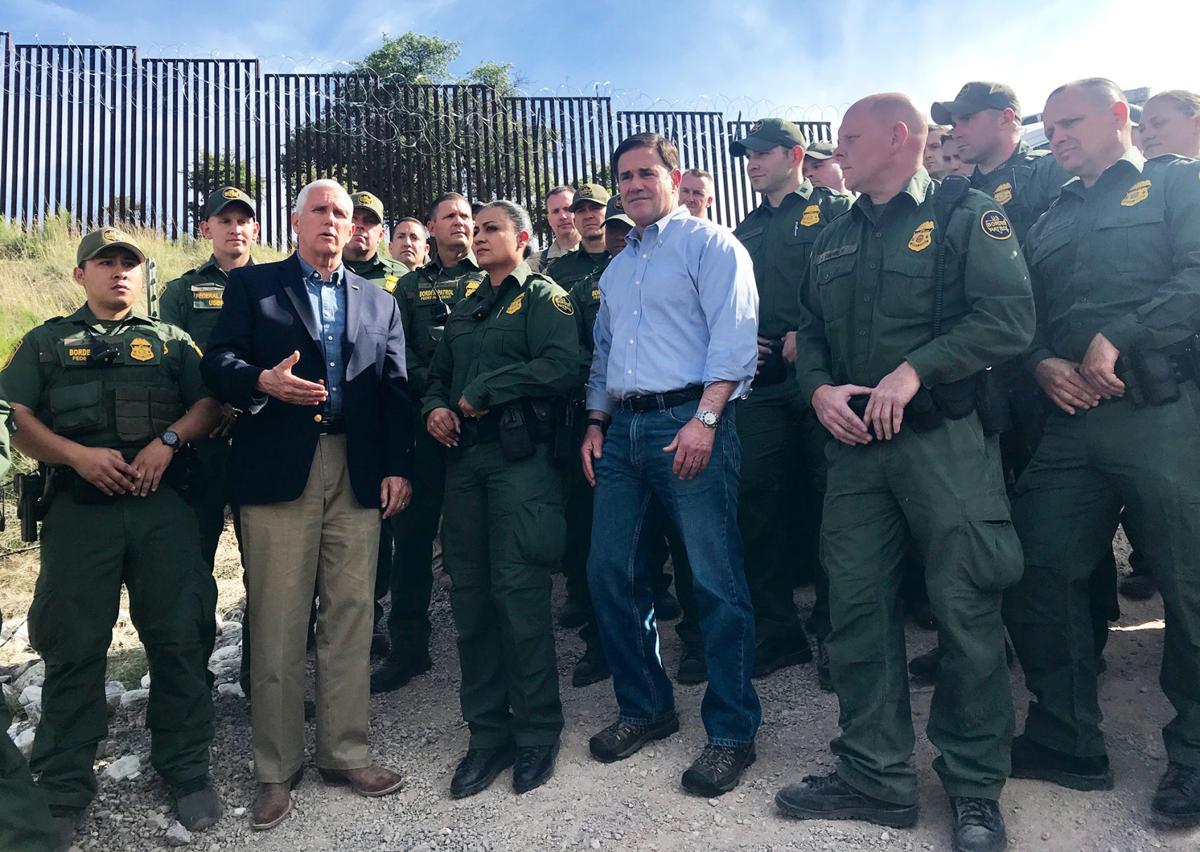 Vice President Mike Pence is joined by Gov. Doug Ducey and a group of Border Patrol agents near the border fence west of the Mariposa Port of Entry on Thursday afternoon.

Making the first official White House visit to Nogales in nearly 45 years, Vice President Mike Pence on Thursday spoke in tough terms about the need to reform U.S. immigration policy, but did not highlight issues specific to the local area or venture out into the community.

During his two-hour stay Thursday afternoon, Pence, joined by Arizona Gov. Doug Ducey, spoke with officials at the Nogales Border Patrol Station and addressed media crews at a gathering with Border Patrol agents in front of a remote stretch of border fence. He did not visit any of Nogales’ ports of entry and did not address the increasingly long lines that have affected pedestrians, cars and commercial traffic.

Pence’s visit came amid a surge in migrant apprehensions at the border in Texas and western Arizona that saw the Border Patrol set a new monthly record for apprehensions of families in March. He used the occasion to reiterate the administration’s position that the “humanitarian and security crisis” at the Southern border must be solved by ending the “catch and release” policy that he said is exploited by human traffickers.

He also said the United States must "close the loopholes in our asylum laws."

After landing by helicopter at the BP station at around 3 p.m, Pence and Ducey met with Chief Roy Villarreal of the Border Patrol Tucson Sector for a short briefing on the situation at the U.S.-Mexico border, which Pence repeatedly referred to as a “crisis.”

“To be here in the Nogales community, to see the work that you’re doing, to fly over the border as we have, it reinforces the determination we have to get you the resources, build a physical barrier,” Pence said, referencing the administration’s determination to build a wall along the border.

Outside the station, a handful of demonstrators gathered with signs reading, “No Border Wall” and “No Wall, No Bullying.”

After the briefing, Pence was escorted by a motorcade of over a dozen vehicles that led him to a more remote area west of the Mariposa Port of Entry, where he delivered additional remarks while standing in front of a border fence significantly smaller than the bollard barrier in and immediately around Nogales, and topped with only two rows of concertina wire rather than the six seen in town.

With agents on horseback keeping watch in the surrounding hills and a group of their colleagues gathered with Pence and Ducey in front of the fence, the vice president extended his gratitude to the agency for their service in protecting the border.

Speaking to the Border Patrol agents gathered at the fence, Pence said, “We’re going to take the message back from the border… that it’s time for Congress to act.”

Aside from Bermudez, local officials, many of whom have called for the removal of the concertina wire on the border fence and highlighted chronic understaffing at the ports of entry, were not invited to participate in the visit.

“The way I look at it is: if you’re going to be coming to a city, (local officials) should have at least an opportunity to be part of it,” said Mayor Arturo Garino, who led the Nogales City Council in unanimously passing a resolution on Feb. 6 to condemn the ground-level wire on the fence.

County Supervisor Manuel Ruiz, whose district includes the three ports of entry in Nogales, said he contacted the White House and Sens. Martha McSally and Kirsten Sinema in hopes of meeting with Pence to discuss issues in Nogales, but was unable to secure a seat at the briefing.

“They’ll come down, take a picture in front of the fence and as quickly as they came in, they’re gone,” Ruiz said about high-profile visitors. “To tell you the truth, I don’t know what the vice president is going to take back from here.”

It was not immediately clear when the last time was that a U.S. vice president had come to Nogales. The last sitting president to visit the city was Gerald Ford, on Oct. 21, 1974.