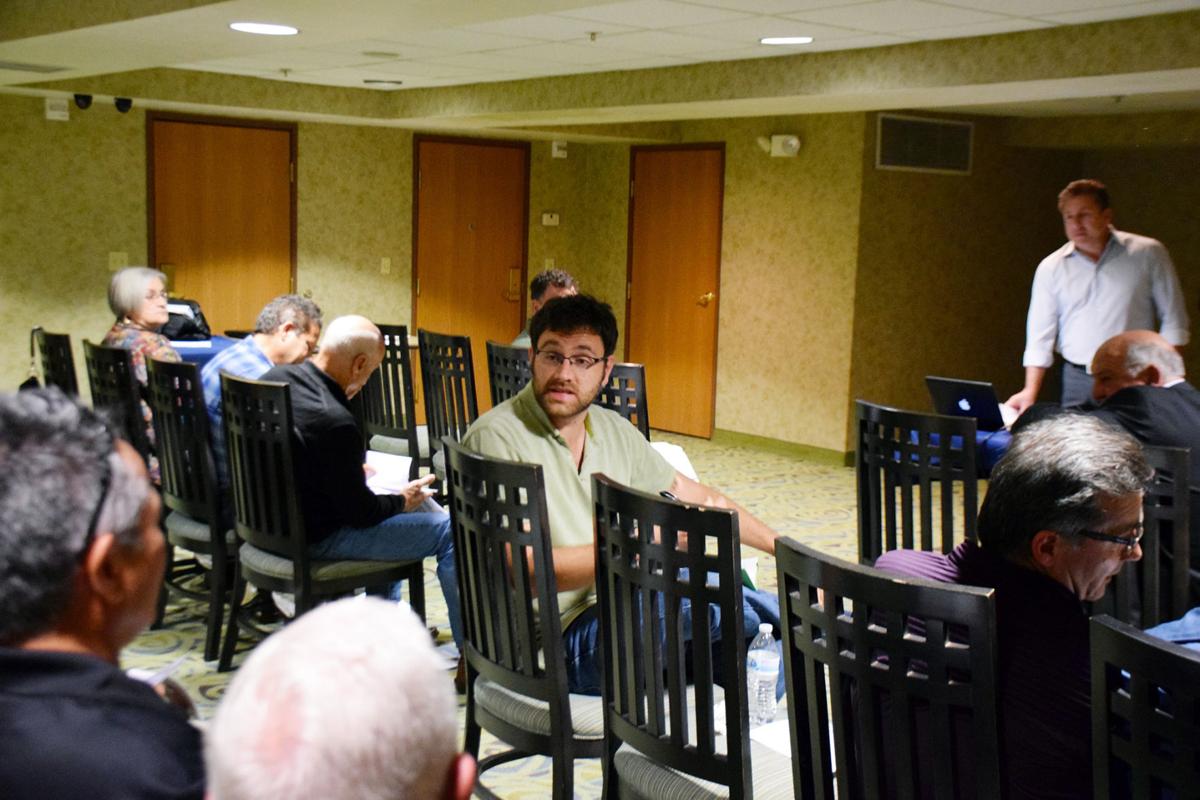 David Clark (center), project manager for the U.S. Army Corps of Engineers, tells concerned residents that he will pass their concerns on to his contacts with the Border Patrol. 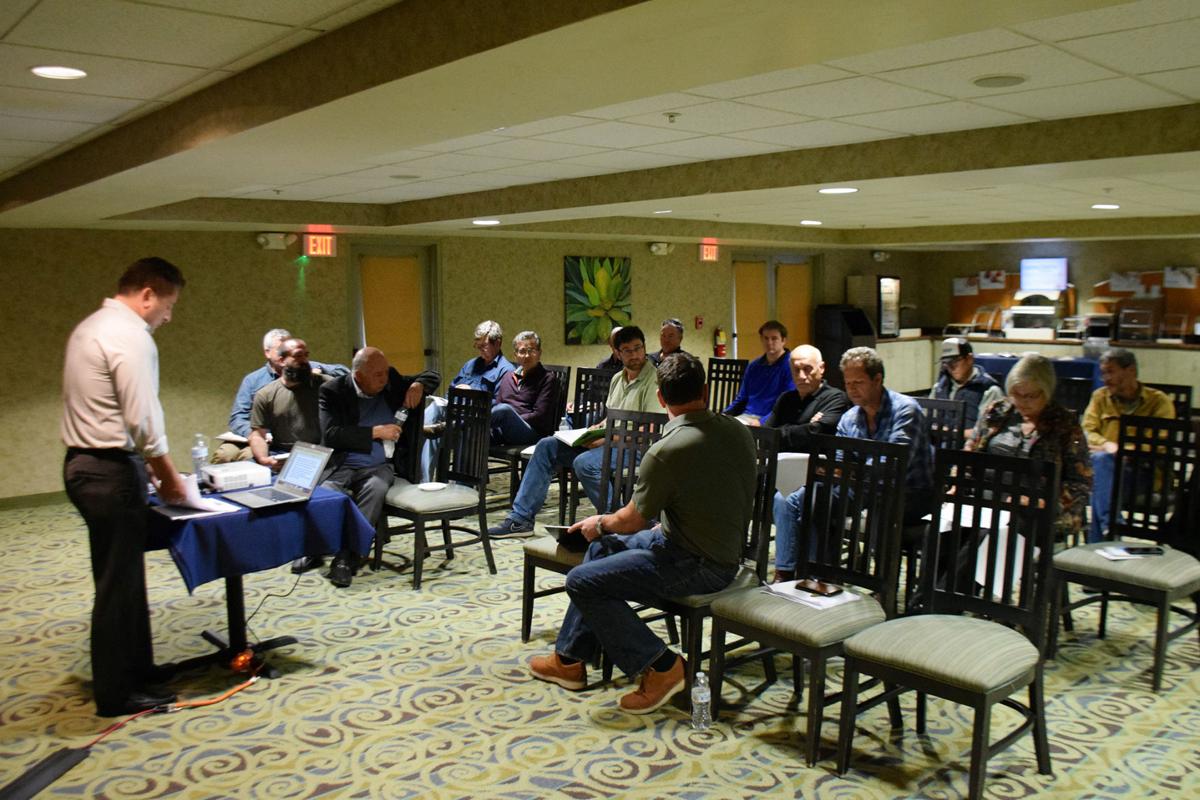 Members of the public did more talking than the presenters at a public meeting Tuesday about a remediation proposal to clean up contamination at a former Border Patrol firing range in Nogales. 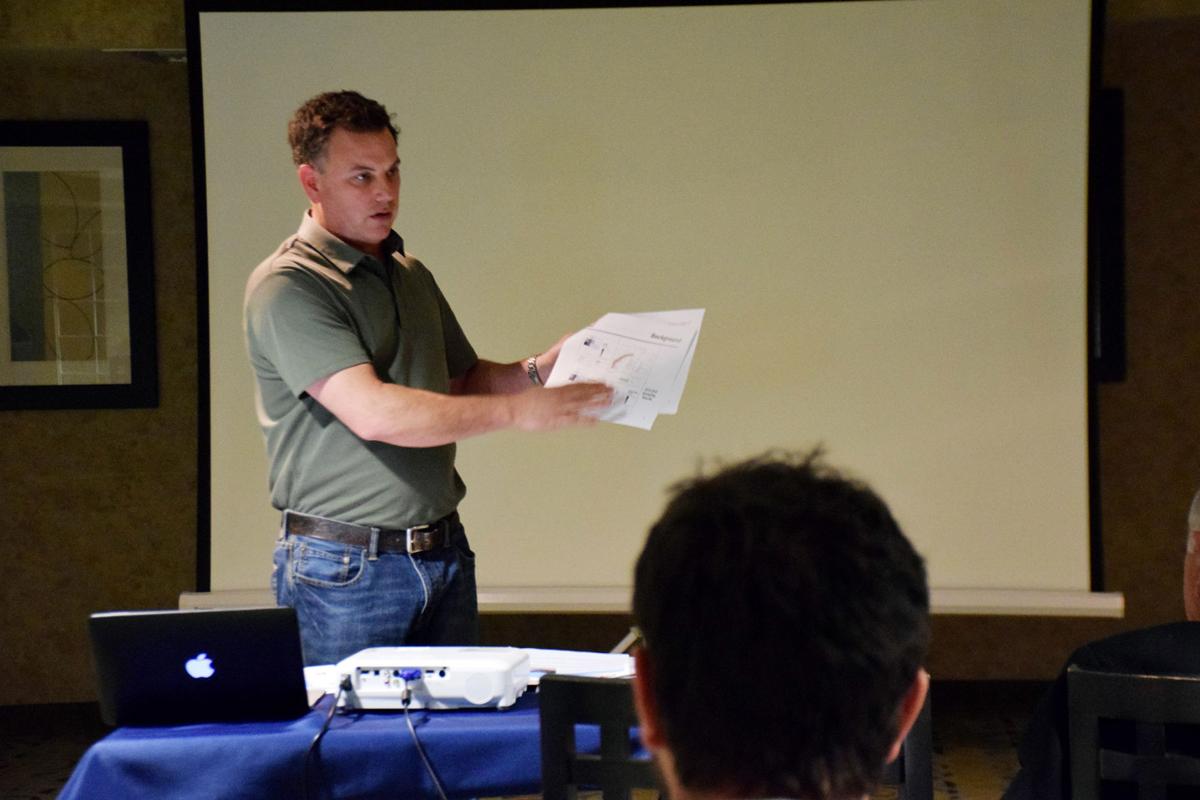 Chris Bacon, project manager for COL-JCP, a contractor hired to undertake remediation work at the site of a former Border Patrol firing range in Nogales, explains the scope of the project.

David Clark (center), project manager for the U.S. Army Corps of Engineers, tells concerned residents that he will pass their concerns on to his contacts with the Border Patrol.

Members of the public did more talking than the presenters at a public meeting Tuesday about a remediation proposal to clean up contamination at a former Border Patrol firing range in Nogales.

Chris Bacon, project manager for COL-JCP, a contractor hired to undertake remediation work at the site of a former Border Patrol firing range in Nogales, explains the scope of the project.

Some local residents and developers aren’t satisfied with a remediation plan to address excessive levels of lead and other contaminants at a former U.S. Customs and Border Protection firing range in Nogales, saying the current plan appears to do just enough to get the Border Patrol off the hook without addressing soil pollutants on surrounding properties.

“(The Border Patrol’s) lease requires them to return the property to the condition it was in before they leased it. They can’t get out of that lease until they do so,” Matt Barr said during a public meeting Tuesday.

“What we don’t want is for them to go in and clean that firing range, get out of their lease and then forget all about the lead (on other properties),” he said. “They’re going to leave it all for us to clean up.”

However, while CBP representatives were not present at the meeting, a spokesperson said in an email Thursday that the organization is working to “ensure the entire area impacted by our training at the former firing range is remediated fully in accordance with applicable state and federal regulations.”

The remedial action plan, presented Tuesday in Nogales by representatives from the U.S. Army Corps of Engineers and contractor SOL-JCP, is intended to remove large amounts of pollution in the soil on the half-acre firing range site. The area off Target Range Road on the west side of the city has excessive levels of lead, antimony and polynuclear aromatic hydrocarbons (PAHs), which will be excavated and disposed at a hazardous waste site, according to the remediation plan.

The project, which was approved in 2015 “to protect the public health or welfare of the environment from actual or threatened releases of hazardous substances into the environment,”is expected to cost $3.7 million. The first phase of remediation is scheduled to begin in mid-April.

However, local residents and property owners at Tuesday’s meeting said the contamination stemming from Border Patrol activity on the firing range, which was in use from 1992 to mid-2010, also extends well beyond the firing range itself, with some of the worst contamination on adjacent properties.

“If you want to get at the source then we need to get to the highest concentration,” he said.

Nohe Garcia, who was awarded more than $500,000 in damages in 2016 after a federal judge found that the Border Patrol was negligent in operating the firing range, resulting in severe contamination to his neighboring property, said the current clean-up barely scratches the surface of the polluted area. He said there are as many as 10-12 acres of contaminated land in proximity to the firing range.

“Our concern is not just adjacent properties, it’s our kids and the people that are going to get killed by contamination that is there, either by going down to the water table or breathing it. That’s our concern, mostly,” Garcia said. “It seems like you’re not here to do what we need to happen.”

‘Not acceptable to the public’

After it became clear that the focus of resident concerns was not on the details of the half-acre cleanup plan, but rather that the scope of the remediation failed to address the larger contaminated area, Robert Noyes, program manager for SOL-JCP, said he hadn’t heard anything about the additional pollution prior to the public meeting.

He said it was uncommon for a plan only to address a small portion of the overall contamination, and noted that public concern is usually the driver of remediation projects.

But David Clark, project manager for the U.S. Army Corps of Engineers, which was hired by CBP to complete the remediation, said CBP will ultimately determine the scope of the clean-up

“This stuff has to go to Border Patrol, it just does,” Clark said. “But clearly, there needs to be some kind of overall strategy. Clearly, what we’re proposing here is not acceptable to the public.”

CBP spokeswoman Meredith Mingledorff wrote in an email Thursday that as a “federal entity committed to the protection of the U.S. homeland, including its vital environmental resources,” CBP will work with the U.S. Army Corps of Engineers “to ensure that the entire area impacted by our training at the former firing range is remediated fully in accordance with applicable state and federal regulations.”

“We live and work in this same community and agree the clean-up is an important part of responsible land use,” Mingledorff said in her email.

Barr, who was among about 15 people who attended the meeting Tuesday, said he thinks the current remediation effort is not only too limited in scope, it would be a waste of money to clean just the firing range and then have to go back to remediate adjacent properties separately.

“There’s no question,” Clark agreed, noting that “cost in this instance doesn’t appear to be the driver. The driver appears to be property boundaries, at least from what I’m seeing.”

Nikita Kyriakis, who owns property south of the firing range, said he felt the Border Patrol was trying to skirt its responsibility by planning a limited remediation when the agency has known for years that the soil contamination extends to other properties.

“The big problem is, how do we fix the whole site for the community?” added Guillermo Valencia, who owns property nearby. “We can’t have that here. We can’t have lead and chemicals breaking down over years and going into our groundwater … What’s all that dust going to do to us over the years?”

He suggested that after years of trying to deal with CBP directly, the next step should be for local leaders to take the issue to elected officials to intervene on their behalf.

Clark, calling himself a “link back to the Border Patrol,” said that despite the project’s current limitations, “that may not be the end of the story.”

“I just want to stress, you guys all have my contact information, and I understand what’s going on here,” he said. “Please, every one of you, send me something if you have concerns about this.”

Public comments on the remediation plan are being accepting from March 1-30 and can be sent to Clark at david.s.clark@usace.army.mil.

CBP to pay $3.7M for cleanup at former gun range

A study at the site found high levels of lead, antimony, arsenic and polyaromatic hydrocarbons (PAHs) in the soil “at concentrations above background or applicable regulatory limits.”