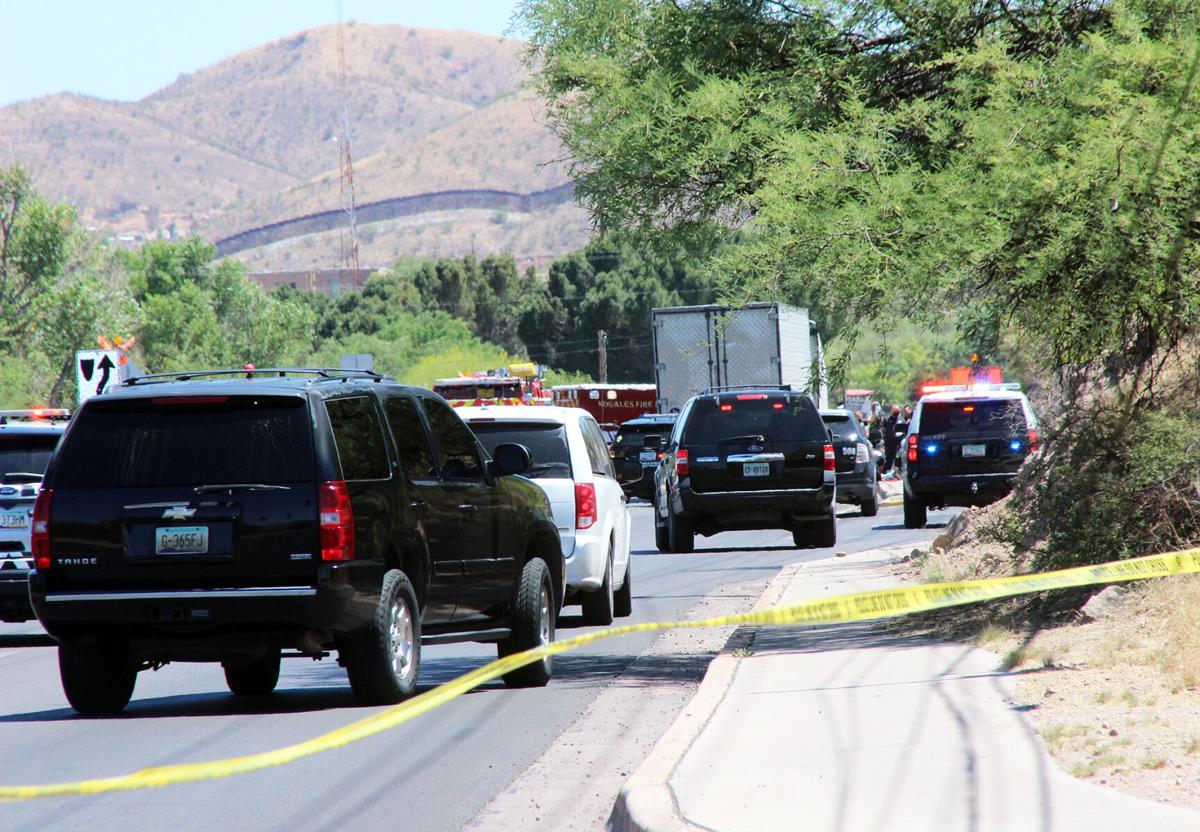 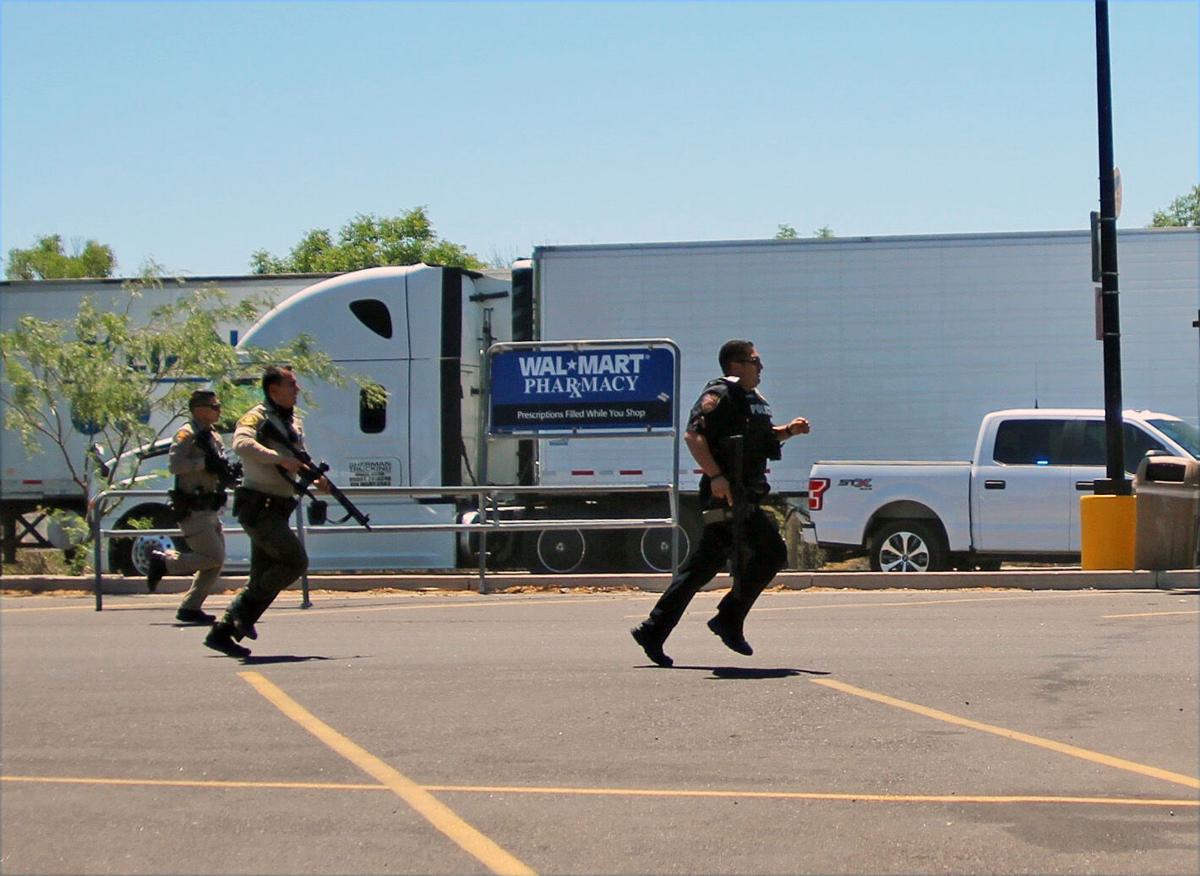 Police officers, with their weapons drawn, chase after the semi as the driver flees the parking lot. 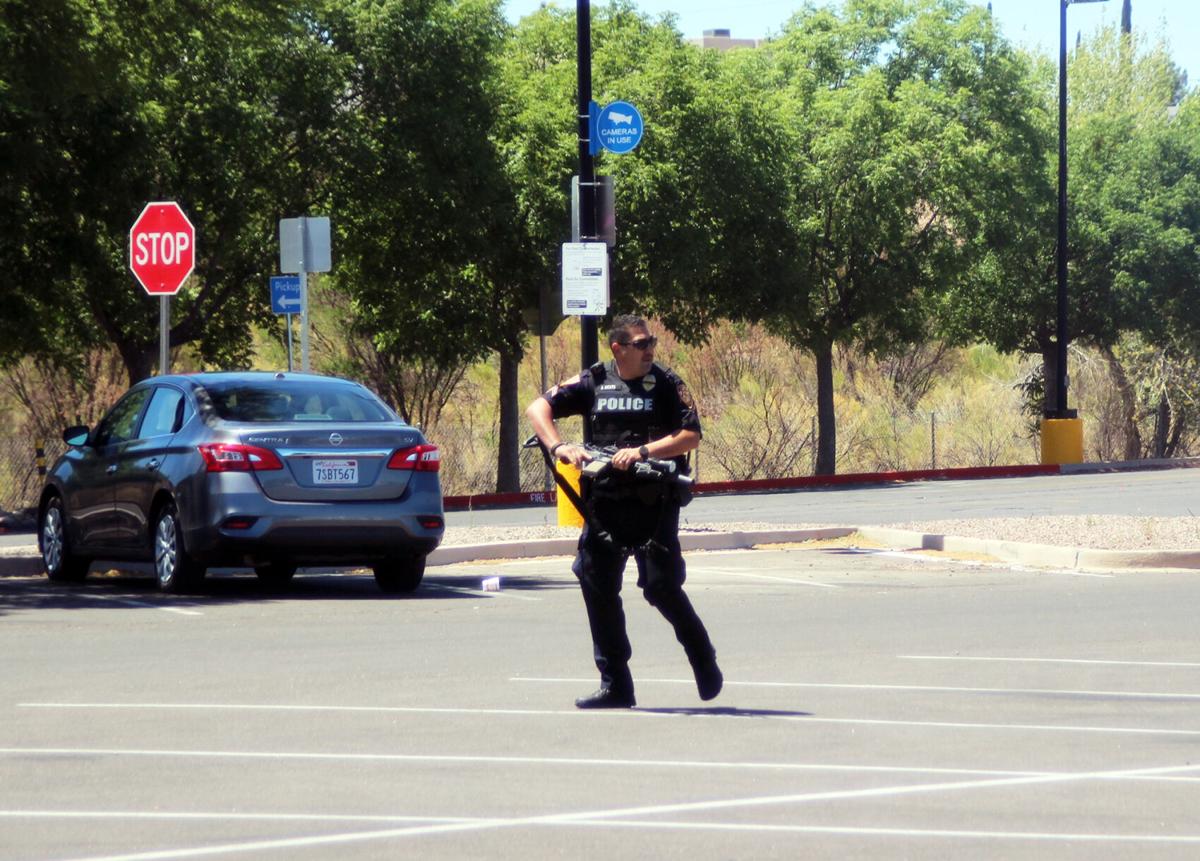 A police officer watches as the semi flees from the Walmart parking lot. 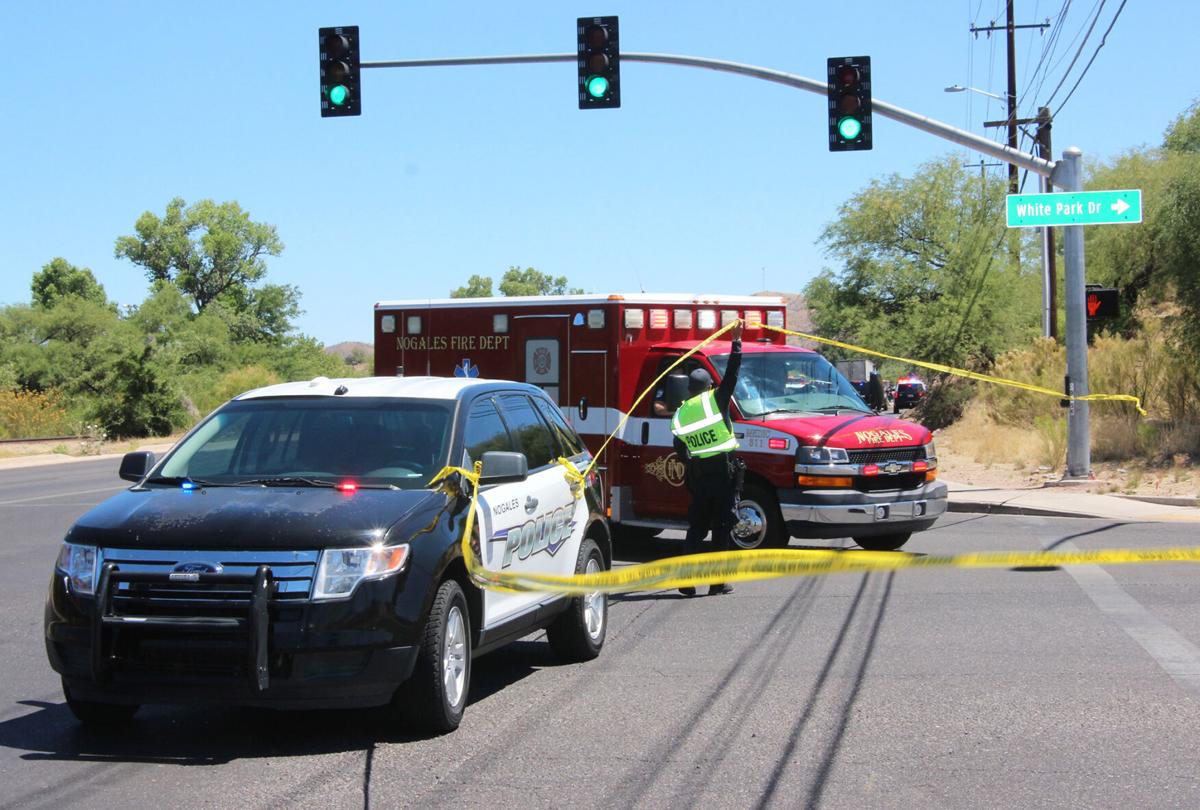 Police officers, with their weapons drawn, chase after the semi as the driver flees the parking lot.

A police officer watches as the semi flees from the Walmart parking lot.

The driver of a semi-truck led police on a pursuit south on Interstate 19 and into the busy Nogales Walmart parking lot on Monday afternoon, where officers opened fire on the fleeing vehicle. The driver eventually came to a final stop on Grand Avenue amid another hail of gunfire.

At approximately 1:40 p.m., the tractor-trailer was stopped by police after it entered the Walmart lot driving recklessly, according to eyewitnesses. They described a chaotic scene in which shoppers in the parking lot were told to get out of the way as police drew their weapons.

Seconds later, the driver of the rig drove off, despite police attempts to stop him by deploying a spike strip. Officers opened fire, and a video of the incident circulating on social media shows a white semi pulling a white, unmarked trailer driving north out of the lot with what appears to be several bullet holes in the vehicle’s windshield.

The driver turned right (east) on White Park Drive and then right (south) on Grand Avenue before being stopped by law enforcement approximately 100 yards south of the intersection.

Another video shared with the NI on Monday night shows the tractor-trailer skidding down White Park Drive with police in pursuit, sirens wailing. A little more than 30 seconds after the semi-truck turns right on Grand Avenue, the sound of dozens of shots fills the air as the person recording the video runs to another area of the parking lot to get a better view.

The person eventually reaches a spot where the rig can be seen stopped on the road, but the shooting has stopped at that point.

Another video recorded by someone who was stopped in a vehicle on Grand Avenue with a straight-on view of the semi-truck shows it moving south at a slow crawl. As it passes a line of police vehicles stationed along the center of the roadway – though not blocking the truck's path – the police open fire, with bullets striking the truck and the dirt cliff on the side of the road.

When the firing stops, police swarm the cab of the vehicle.

Nogales Fire Department ambulances arrived at the scene to attend to the unidentified driver, who was taken to the hospital in critical condition as the result of bullet wounds.

Speaking shortly after 3 p.m., Sheriff David Hathaway said he had received confirmation that the suspect had died, though he did not know the person’s identity. Several other people with knowledge of the situation also confirmed the suspect’s death.

An ambulance was also seen driving up White Park Drive toward Walmart following the incident, but it wasn’t immediately clear if there were injuries there.

NPD Chief Roy Bermudez said the semi crashed into one NPD vehicle at Walmart, but did not strike any other vehicles. He wasn’t sure about injuries aside from those sustained by the driver.

Bermudez said officers from NPD and the Santa Cruz County Sheriff’s Office used deadly force during the incident. Hathaway confirmed that sheriff’s deputies were involved, and said the Arizona Department of Public Safety was leading the investigation.

In one video that was circulating on social media shortly after the incident, what appears to be the same white tractor-trailer is seen slowly pulling out of a warehouse area in Rio Rico as U.S. Border Patrol agents and sheriff’s deputies point their weapons at the driver in an attempt to stop him.

However, the driver continues to accelerate and the officers get into their vehicles to follow.

Bermudez said he wasn’t sure how the pursuit started, but NPD took over from state troopers and the Sheriff’s Office on Interstate 19 after the southbound semi-truck exited and headed for Grand Avenue.

The suspect eventually stopped at the Walmart lot, the chief said, but decided to drive off, running over a spike strip roadblock and driving past the west entrance of the store before turning toward the parking lot’s westernmost exit and striking a patrol vehicle. At that point, Bermudez said, “police used deadly force to stop him.”

By the time the gunfire started, this reporter had arrived at the scene and had begun talking to Walmart shoppers Raymundo and Tania Osuna.

“They’re shooting! They’re shooting!” Tania shouted before taking cover behind a car. Raymundo dropped to the ground holding his young son as his full shopping cart rolled away.

Speaking afterward, Tania Osuna said she got a good look at the driver. “He was a young man and he was on the phone the whole time,” she said.

Despite being the lead agency in the investigation, DPS declined to provide any information about the incident, other than to say that its officers had assisted local agencies “with a criminal incident.”

Bermudez said he wanted the public to know that “this is an isolated incident and there is no further danger to the community.”

“This does not happen in Nogales,” he added.