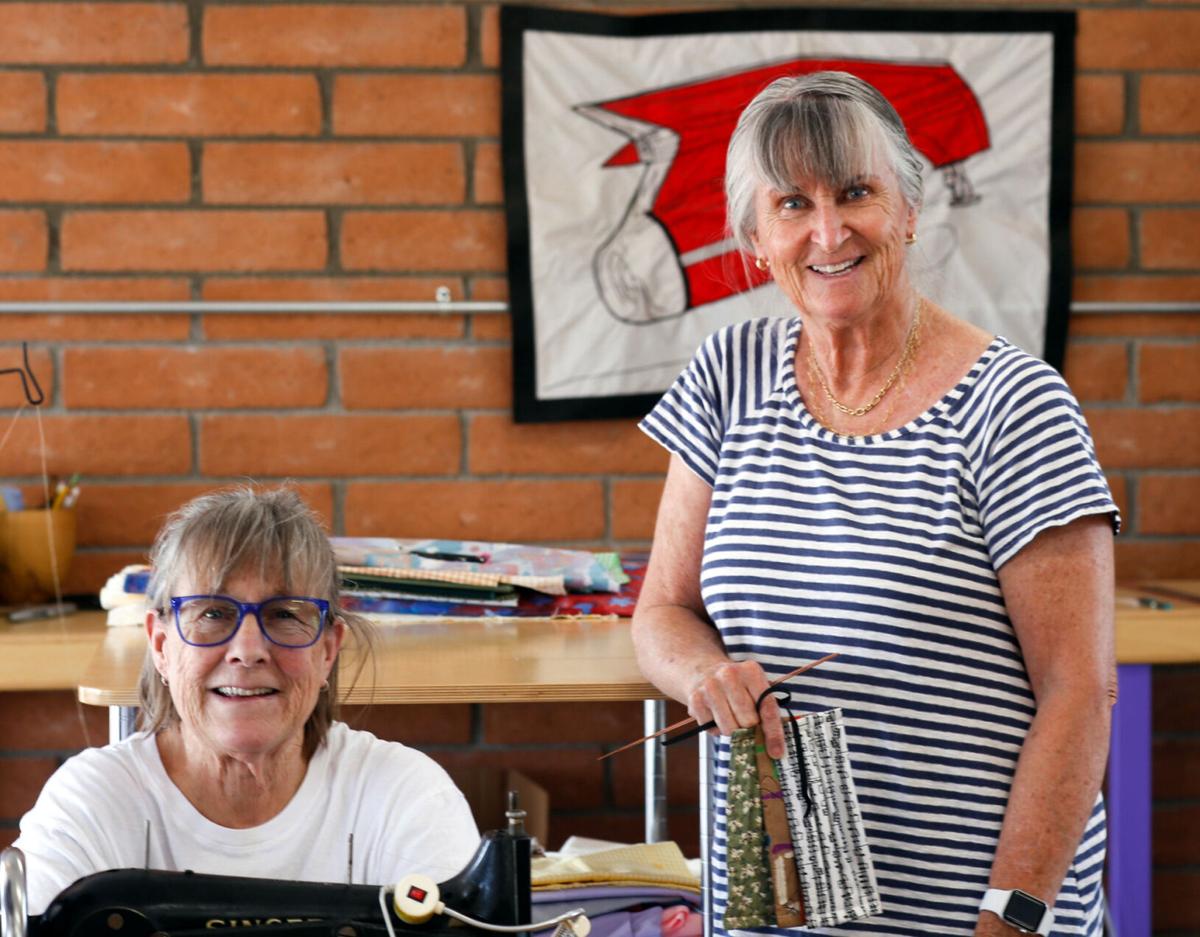 Mimi Henley and Elen Kentnor made and donated more than 7,000 masks to help keep people safe during the COVID-19 pandemic. 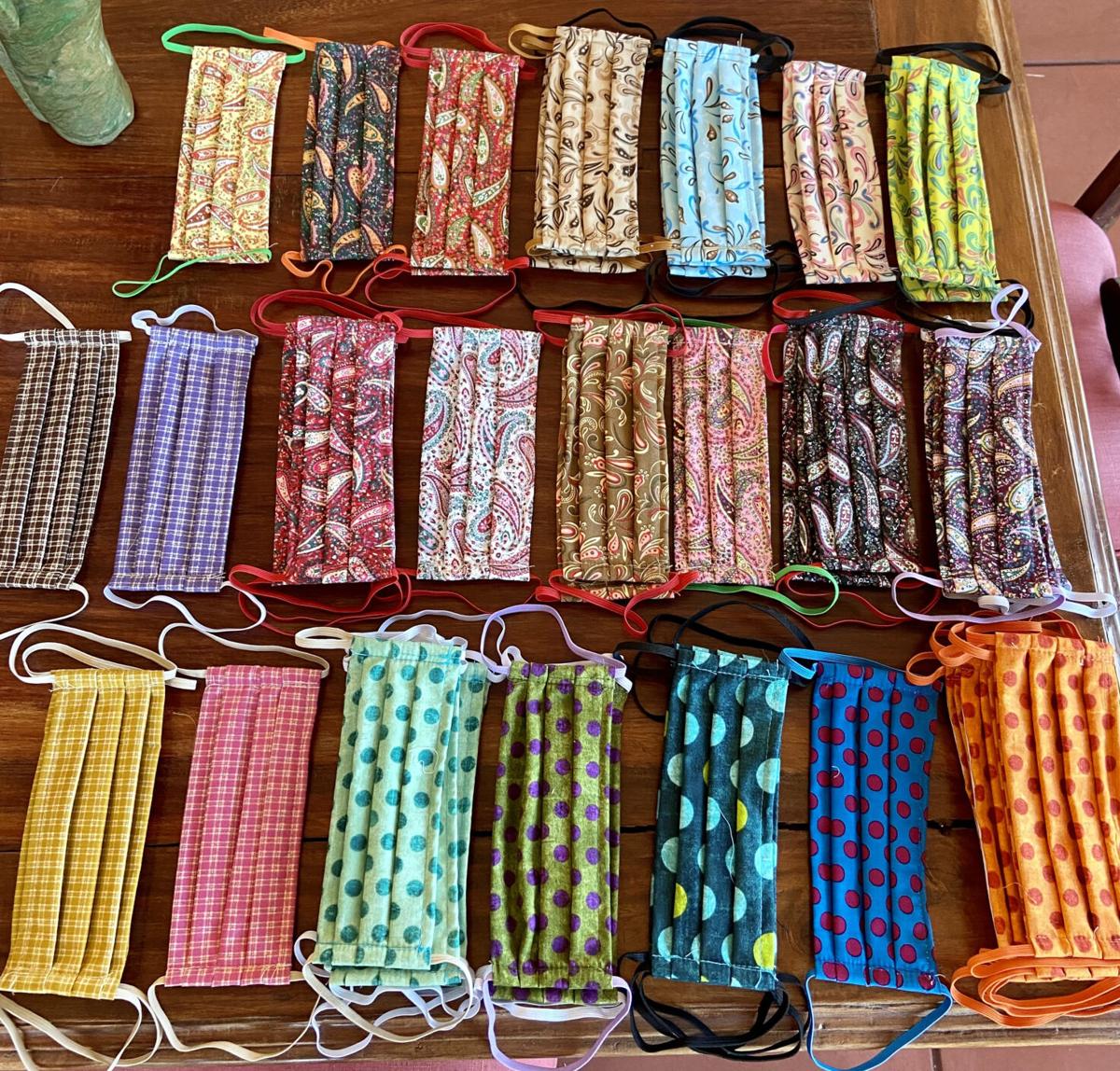 The three-layer pleated masks included an outer layer of 100-percent cotton, and an inner layer of cotton or cotton polyester that included a pocket holding an air filter of melt-blown polypropylene. The masks are machine washable after removing and hand-washing the filter. 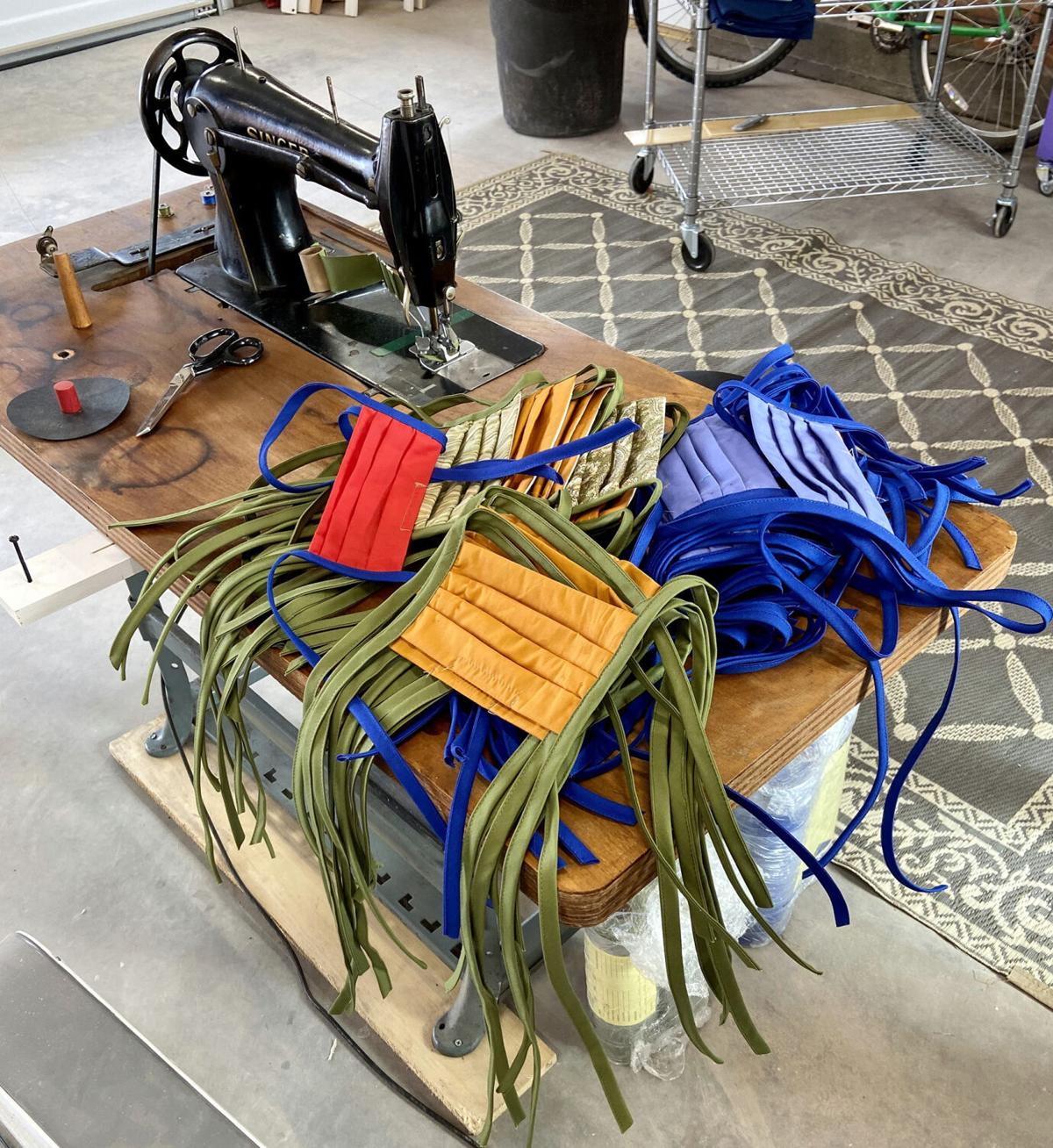 When it was impossible to procure elastic, they made ties from scraps of coordinating fabrics, which worked well for health care and office workers who had to wear them for eight or more hours at a time. 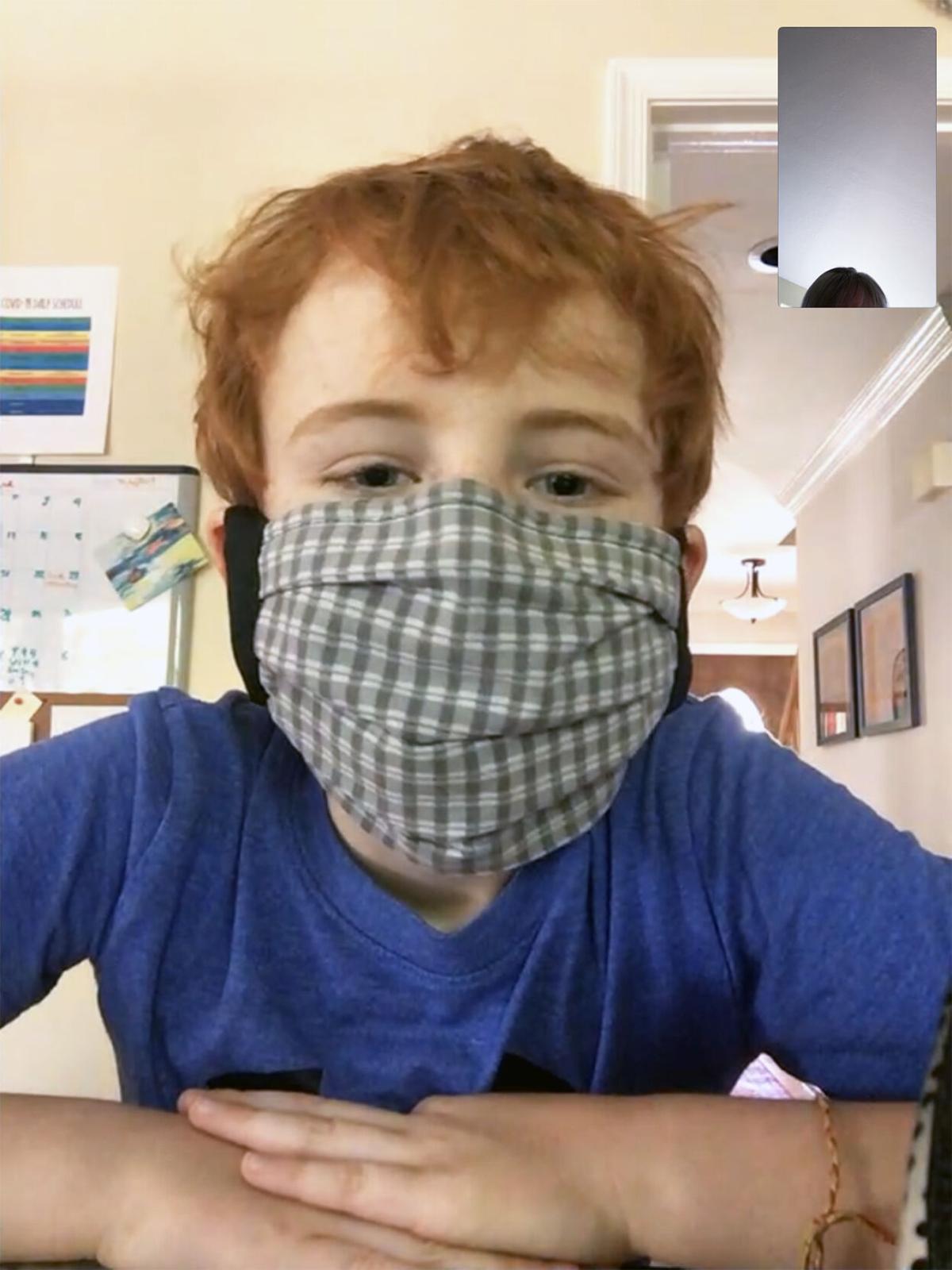 Kentnor’s 8-year-old grandson, William Corby, of Springfield, Virginia, models a children’s mask. The women made these in five sizes to fit students from kindergarten through eighth grade.

Mimi Henley and Elen Kentnor made and donated more than 7,000 masks to help keep people safe during the COVID-19 pandemic.

The three-layer pleated masks included an outer layer of 100-percent cotton, and an inner layer of cotton or cotton polyester that included a pocket holding an air filter of melt-blown polypropylene. The masks are machine washable after removing and hand-washing the filter.

When it was impossible to procure elastic, they made ties from scraps of coordinating fabrics, which worked well for health care and office workers who had to wear them for eight or more hours at a time.

Kentnor’s 8-year-old grandson, William Corby, of Springfield, Virginia, models a children’s mask. The women made these in five sizes to fit students from kindergarten through eighth grade.

“I haven’t sewn anything since I made a clown costume for my 3-year-old son, who is now 47,” Elen Kentnor of Elgin said with a laugh.

She and her longtime friend Mimi Henley were brainstorming ways to help people keep safe during the COVID-19 crisis when the idea of making and donating masks came up. It seemed like the best option and Kentnor didn’t hesitate.

“I figure it’s never too late to learn a new skill,” she said.

Henley is a former professional seamstress who had a contract sewing business in Washington state before retiring to Sonoita. She had kept four of her commercial-grade sewing machines, so her husband, Steve Johnson, moved his shop equipment out of their garage to make room for the women to set up the machines in a large, open-air space.

The first priority was to design state-of-the-art masks that would protect both the wearer and those they came in contact with.

They devised a pattern composed of three layers. The outer layer was cotton, the inside layer was cotton or cotton polyester, and the fabric for the filter was a melt-blown polypropylene that is used to make N95 masks. They then experimented with various lengths for the elastics and came up with a size that would fit most people, both men and women.

One of their most daunting challenges was finding materials, which were in short supply due to the pandemic.

They made requests for fabric on Clare Bonelli’s Eastern Santa Cruz County newsletter and had an outpouring of help from the community and many local quilters.

“It was really fun to have all these small pieces from quilting projects which would be only enough for a few masks. But I could mix it with a coordinating fabric and make ties out of them,” Kentnor explained.

Among the many donors was one who brought in four black garbage bags full of fabric and another who donated a dozen six-packs of extra-large white T-shirts that they used for the inner layer.

The metal for the nose piece was also unavailable. After experimenting, they finally settled on some wire left over from a construction project at Henley’s home. It was coated in plastic and impervious to rust, making it durable for use in the washing machine.

The project was a time-consuming, 13-step process until Johnson stepped in and creatively devised several ways to speed things up.

He made a form for Kentnor to use instead of pleating all the masks by hand, consisting of a thin piece of cardboard with spaces to press in the pleats. The fabric was secured to the form by pieces of aluminum resembling a slide barrette, which held the pleats in place. He also made a press that cut 100 pieces of inner layer at a time, and a jig the same length as the wire, to cut the nose pieces.

Another of his innovations consisted of a piece of wood 12 inches in circumference, just the size of the elastic for the ear bands. The elastic was wound around the wood and then a hot soldering iron was applied so they could cut about two dozen elastics at a time. Both Charlie Kentnor – Elen’s husband – and Johnson cut the elastics and even learned to do some stitching on the machines.

Henley did the majority of the sewing, Elen Kentnor cut and assembled the fabrics and Charlie Kentnor did most of the pressing. They produced a minimum of 50, up to a high of 100 masks per day.

With their production system streamlined, they needed to identify those people and programs that needed the most help in obtaining masks. Friends, word of mouth and social media were the starting point.

One friend had a contact for Navajo, Hopi and Sioux reservations. Another friend let them know when Elgin Elementary went back to in-school learning. To serve the latter group, they came up with five sizes to fit children from kindergarten to eighth grade. Every student received two masks and filters packed in a plastic bag labeled with the size, from extra small to large.

The Deaconess.com website was a good resource for area groups that had signed up for help. There they found a list of homeless shelters and visiting nurses, along with Banner’s Children’s Hospital, which needed masks so parents could visit their children. Susan Scott of Sonoita gave them the contact for Kino Border Initiative, a Jesuit ministry that serves migrants in Nogales, Sonora, and arranged for their mask delivery. Nicole and Phil Eiker and Tom Anderson also provided valuable assistance.

The dedicated duo worked every day including weekends, from March through October, only taking off about four days.

In the fall, to better protect themselves with social distancing they took turns working in the garage like a tag team. When they had used the bulk of their donated material, the women congratulated themselves and their husbands for a job well done and gave Johnson his garage back.

In all, they donated more than 7,000 masks in an eight-month period. Reflecting on their dedication, Kentnor summed it up this way: “It was a really good project and we feel pleased about what we did. We believe we made a difference, especially for our indigenous people, who received the bulk of our masks.”

Shining Stars is an annual publication of the Nogales International in which we highlight some of the Santa Cruz County residents whose work and/or volunteerism makes our community a better place.

During the past year, the COVID-19 pandemic has brought historic difficulties to the area, and numerous people have stepped up to play key roles in helping their neighbors adapt to and survive the scary new reality. It would be impossible to recognize everyone who rose to the occasion, so we’re highlighting people who operate in several key areas – health care and emergency medicine, education, volunteerism, delivery services – as representatives of everyone in their sectors and community as a whole who made a difference.