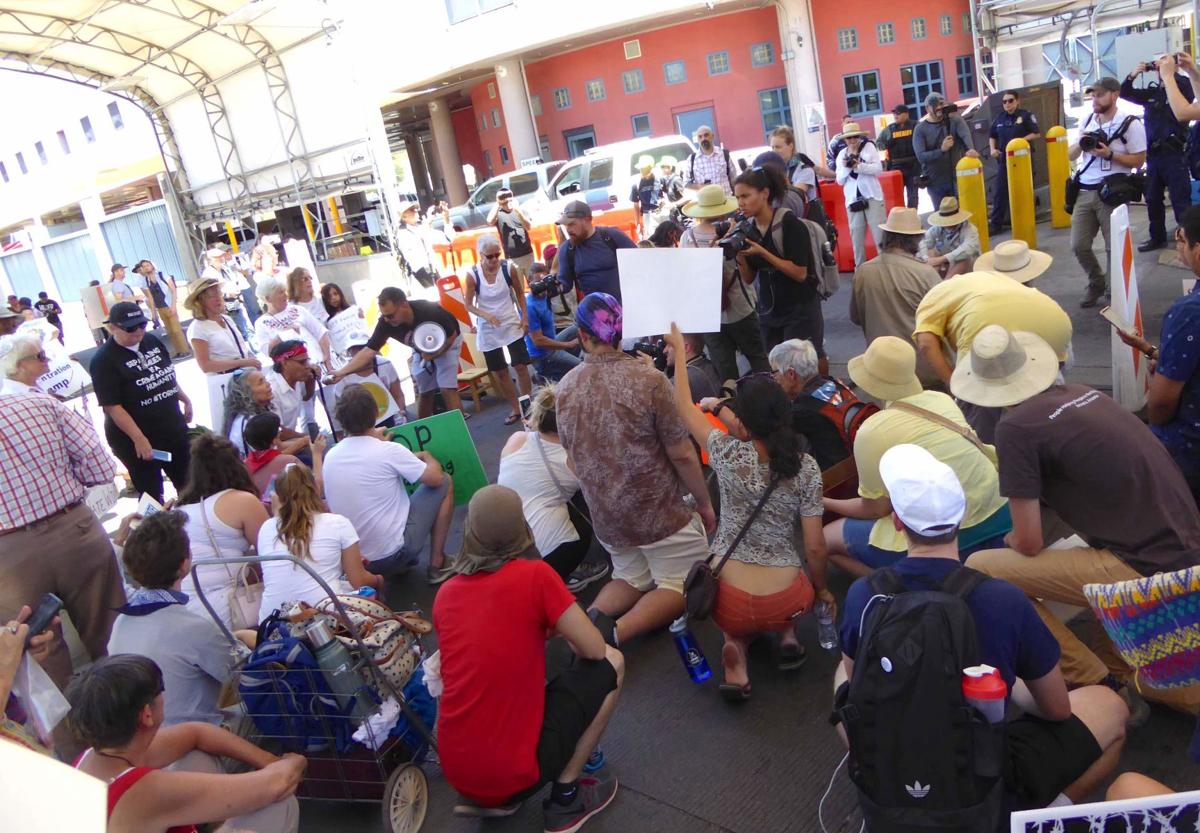 Protesters sit and sing under the canopy of the vehicle entry of the Dennis DeConcini Port of Entry. 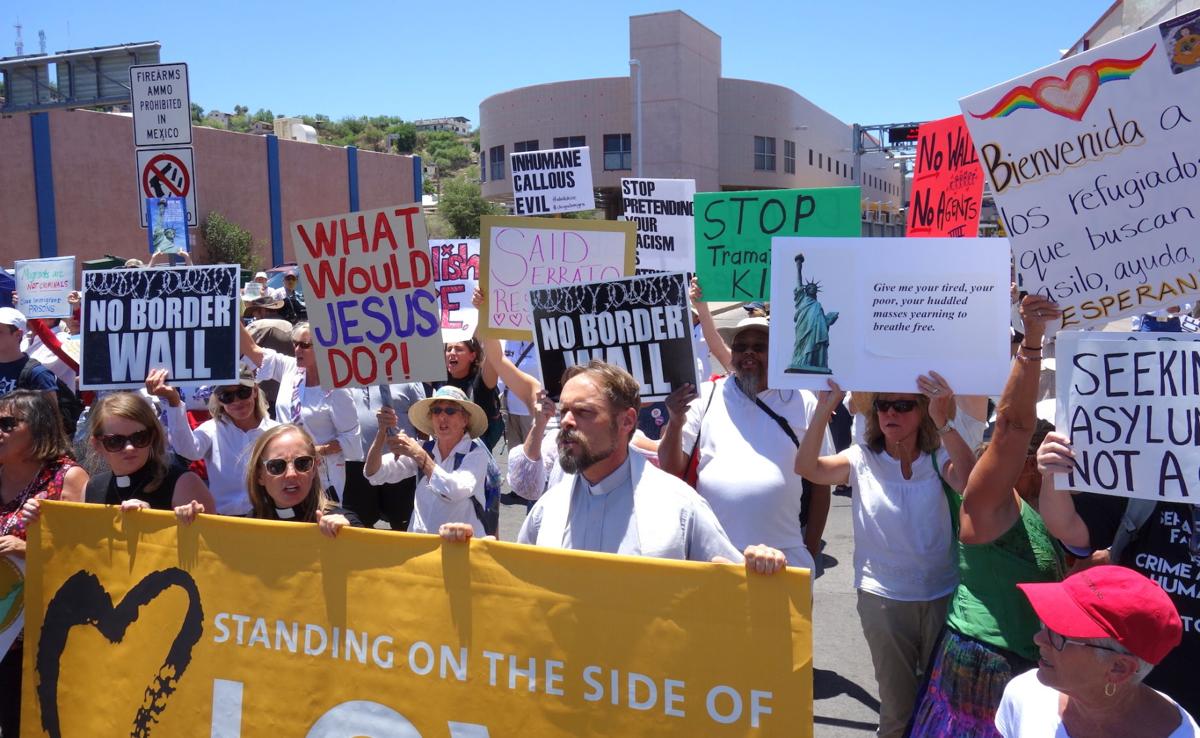 Protesters block the southbound vehicle lanes leading to the Dennis DeConcini Port of Entry on Saturday. They later moved closer to the port, engaging directly with CBP officers and pedestrians.

Protesters sit and sing under the canopy of the vehicle entry of the Dennis DeConcini Port of Entry.

Protesters block the southbound vehicle lanes leading to the Dennis DeConcini Port of Entry on Saturday. They later moved closer to the port, engaging directly with CBP officers and pedestrians.

A rally and protest march against the Trump administration’s border and immigration policies turned into an act of civil disobedience Saturday when demonstrators blocked vehicle access to the Dennis DeConcini Port of Entry, leading police to divert cross-border traffic away from downtown.

The day's dramatic events began at around 11 a.m. when hundreds of people, many wearing white and hoisting signs, gathered in Karam Park on Morley Avenue for the Families Belong Together protest. There, they heard speakers condemn policies that have led to the separation of undocumented families and imposed limits on asylum-seekers.

Then at noon, the protesters, led by the Patagonia-based organization Voices from the Border, headed out from the park, marching down Morley to the pedestrian border-crossing, back up the street and across the railroad tracks at Park Street to Grand Avenue. At that point, some members of the crowd stopped in the crosswalk in front of the DeConcini port, blocking southbound traffic as they chanted “Free the children,” “Abolish ICE” and “Tear down the wall.”

“This was always our intent,” said Rev. Matthew Crary of the Unitarian Universalist Congregation in Amado, one of the organizations that sponsored the event.

Crary, along with other clergy members, held a yellow banner reading “Standing on the side of love” as they alternatively blocked access to the port and northbound lanes at the intersection at Grand and Crawford Street.

“It’s so important to be right here, because there are families that can hear us, that can hear what we say as we’re shouting and chanting and signing that we’re with them,” he said, in reference to the asylum-seeking families, mostly from Central American and Southern Mexico, who have been camping out for weeks on the south side of the port.

But if the protesters had always intended to block cross-border traffic, that was news to Nogales Police Chief Roy Bermudez.

“The plan that was presented was that everybody was supposed to stay on the sidewalk, and our main purpose was to make sure the public remained safe and orderly,” he said as he surveyed the scene.

“The (stated) purpose was that they were going to get together at Herald Square and have music … and do a peaceful protest,” Bermudez said in reference to the small plaza at the southwest intersection of Grand and Crawford. “But obviously they had other plans.”

In response to the civil disobedience, NPD officers blocked off southbound Grand Avenue at Elm Street, sending traffic up Elm and Terrace Avenue toward Interstate 19 north and the Mariposa Port of Entry.

When the marchers initially blocked the port and southbound traffic began to back up, some drivers blared their horns in displeasure, though the passengers of at least one car honked and waved supportively at protesters as they were detoured away from the port.

Asked about the decision to protest family separations by disrupting border-crossing traffic on a Saturday, when many local families cross back and forth to visit loved ones, Crary said he was sympathetic about the inconvenience. But he said it was important that the protesters’ message was heard by a larger audience.

“Civil disobedience means we’re putting ourselves on the line and we’re bringing awareness to a broader community,” he said. “I imagine the people here know far better how uncomfortable and inconvenient these policies truly are … they know the real truth of what’s happening to these families much more than we do, and I imagine they’re in solidarity with what we’re doing, too.”

Saturday is also an important day for cross-border shopping in Nogales, and bus driver Rudy Robles looked on anxiously as the protest shut down access to bus stops near the port where he normally loads up with passengers headed for the Mariposa Road commercial area.

“It’s affecting the civilians and it’s not fair,” he said. “They can protest all they want, but don’t cause any trouble.”

At approximately 12:40 p.m., a group of protesters blocking northbound Grand Avenue at Crawford Street joined back up with others still stationed in front of southbound vehicle lanes and marched into the port facility itself, stopping in the shade under a canopy.

There, they chanted “Tear down the wall,” “No borders” and “No están solos (You’re not alone)” as shoppers and other border-crossers walking along the port’s adjacent pedestrian lane pressed their faces against a dividing fence to watch and record the action on their phones.

The protesters eventually sat down and began to sing. U.S. Customs and Border Protection officers, some of whom were initially smiling as the protesters approached, took on a more neutral or bored countenance.

She apologized to the people who needed to cross the border to visit their family or go to work, adding: “But this is something we feel deeply passionate about and it effects more than just the people who are going to work in Nogales, Sonora. We have to do this for the whole country.”

A splinter group then headed toward the pedestrian crossing, where they stopped just before the plastic orange barriers and across from the passport control room where people enter the United States. Other protesters stood above them on the sidewalk.

Facing a wall of stone-faced CBP officers, the protesters took turns giving speeches and shouting at the officers to follow their conscience, quit their jobs and join them.

“We want to tell you today that you don’t have to comply with your orders,” Billy Peard, a Tucson staff attorney with the Arizona ACLU, said into a megaphone. “At the end of the day, what’s in your heart, your morals, your personal ethics, trump – no pun intended – your jobs orders.”

Hannah Adair Bonner, a pastor with the United Methodist Church, asked the officers to come stand with her and the other protesters.

She told the officers about her experience visiting Tornillo, Texas, where children and toddlers separated from their parents while illegally crossing the border are being held in tents. She said the youth there endure high heat and humidity, and must shower in trucks and go to the bathroom in port-o-potties.

A protester asked the officers how their children will feel about them once they are old enough to understand what they did, and another said that Nazis also said they were simply following orders.

None of the CBP officers reacted to the provocation.

Bermudez, the Nogales police chief, said he believed some of the protesters had hoped to get arrested. As a result, his officers refrained from making arrests and instead moved to get traffic away from the port to diffuse the situation.

“That’s what they want and that’s why we’re taking the motivation away from them, because that would make their day right there,” he said.

At one point while the protesters were in the pedestrian area, a man and woman crossing from Mexico into the United States shouted criticism at them. Clergy and other protesters, rather than the CBP officers, intervened to de-escalate the situation as the man and some demonstrators got in each other’s faces and argued aggressively. People yelled “racist” and “white trash” at the man, who shouted back that he was Mexican.

At around 1:30 p.m., with no arrests made, the protesters headed back toward the park. Normal traffic flows resumed shortly thereafter.

Manuel Leyva, a resident of Nogales, Sonora who watched the protest as he crossed into the United States through the pedestrian lanes, expressed his support for the spirit of the demonstration.

“It’s bad, it’s bad that they separate the children from the families,” he said.

But after seeing the action unfold, Guadalupe Alphonso Ochoa, a 60-year-old Nogales resident, said he disagreed with the protesters.

'We will not rest'

The Families Belong Together protest in Nogales was one of hundreds of similar events held in towns and cities across the county on Saturday to demand an end to the separation of migrant parents and children. “Reunite families now,” “Free the children,” “Stop the inhumanity of separating families” and “Families belong together – Trump belongs in jail” were some of the slogans attendees drew on signs or wore on T-shirts.

Monica Dabdoub, an 8-year-old student at Lincoln Elementary School who spoke during the rally at Karam Park, told the demonstrators that she wanted to speak for the children who had been separated from their parents.

“I don’t know how the moms feel that they’re not with their kids, but I do know what the kids do feel,” she said. “I know that they don’t feel angry, they don’t feel bad, they feel horrible. So I just want to say that we need to fight, fight hard to bring them (together).”

The Trump administration’s “zero-tolerance” policy, announced in April by Attorney General Jeff Sessions, requires that all undocumented border-crossers be criminally prosecuted, even those traveling as families. Implementation of the policy resulted in the separation of an estimated 2,300 children from their parents before Trump bowed to criticism and signed an order ending the separations June 20.

But even with the practice officially ended, and even with a federal judge’s order last week calling for families separated at the border to be reunified within 30 days, critics are concerned that the reunification process will be long and difficult. And they oppose the Justice Department’s assertion that it can hold families together indefinitely in detention camps as it continues to enforce zero tolerance at the border.

“Like you, I believe that families belong together and free. And like you, I will not rest until this ends,” Alison Harrington, pastor of Southside Presbyterian Church in Tucson, told the crowd at Karam Park.

Protesters also spoke up for asylum-seekers, railed against the militarization of the border and blasted the agencies that execute U.S. immigration policy, especially Immigration and Customs Enforcement, or ICE.

“This is the area in which everything we are here about today occurs on a daily basis, and occurs with impunity,” he said.

Saturday’s rally at the park kicked off with a song by Pablo Peregrina, a Nogales native. The singer-guitarist said he wrote it for the occasion, finishing while on the highway to town.

“Separating the families in the fragile promised land/the world is outraged by this madman in command,” went one couplet that drew an especially loud cheer from the audience.

Collection: Asylum-seekers at the border

Some locals who participated in the Families Belong Together rally and march last Saturday were surprised when a group of protesters moved to block the DeConcini port of entry. And they weren't convinced it was a good idea.