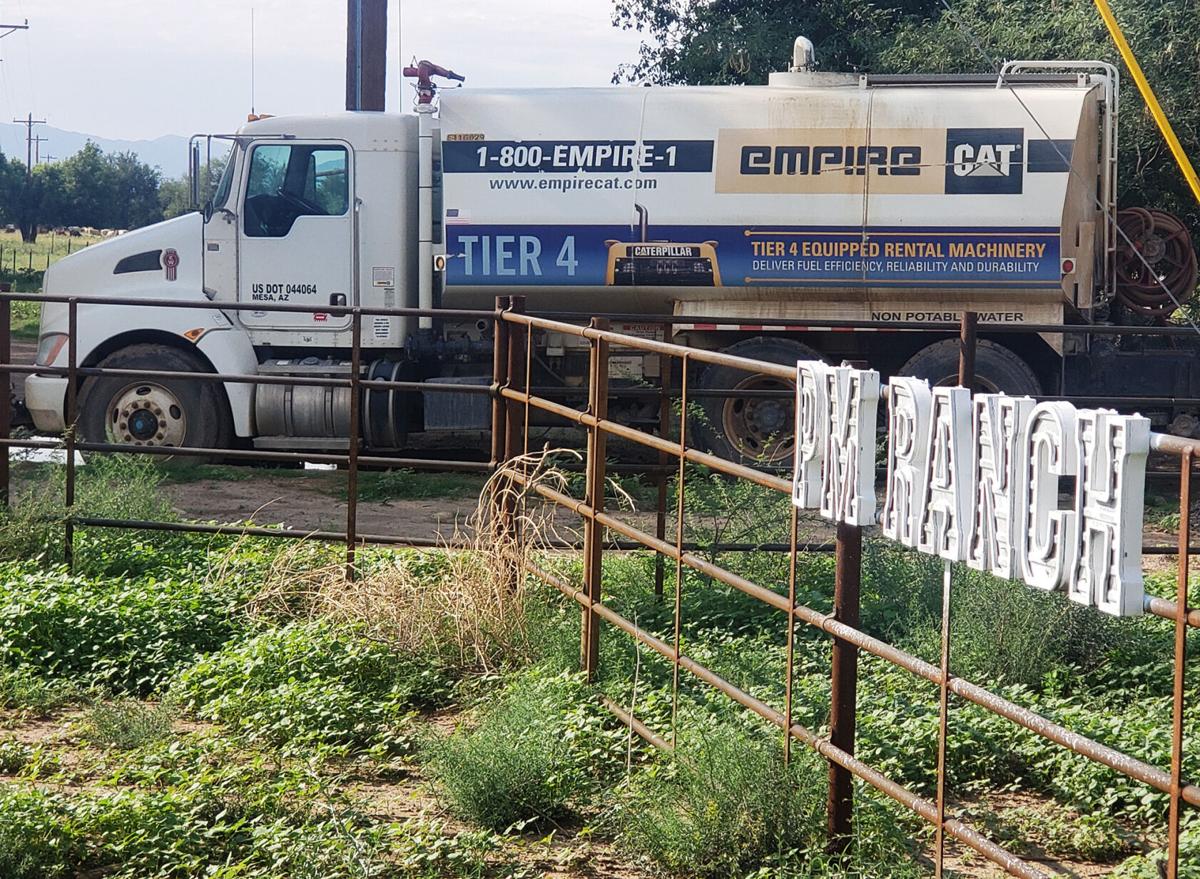 A water truck is parked at the entrance to the PM Ranch in Tubac on Wednesday afternoon. 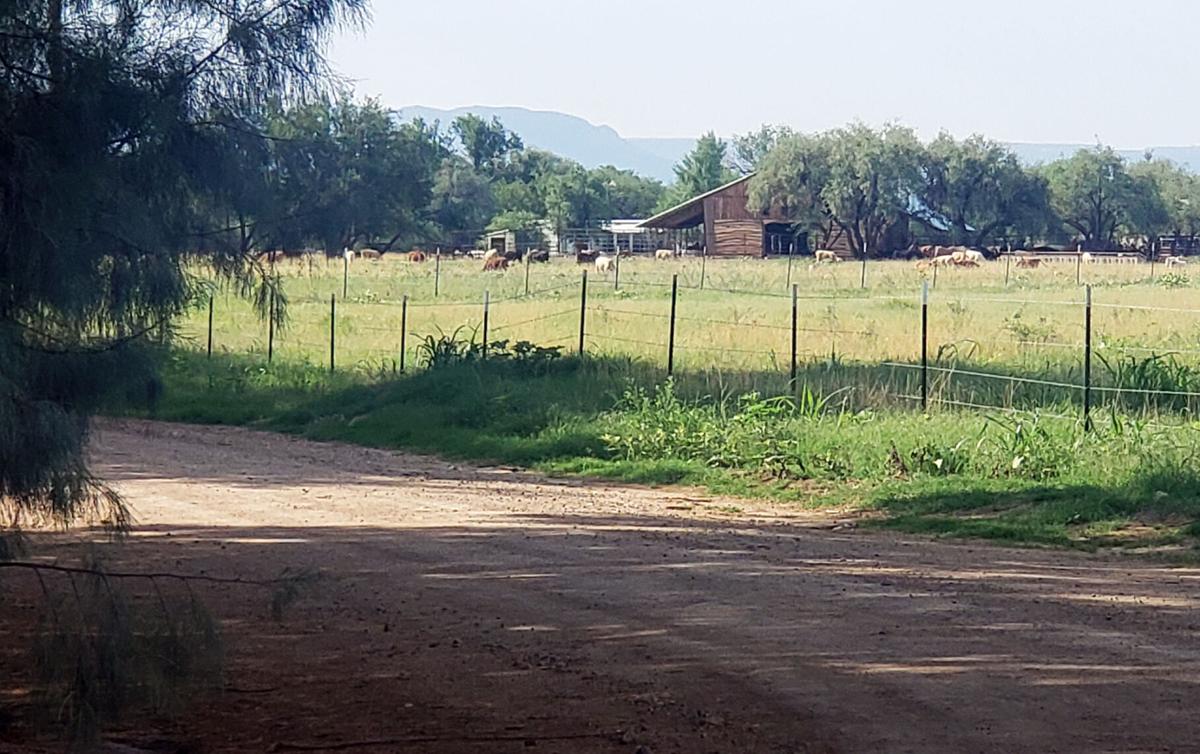 Cows graze at the PM Ranch in Tubac on Wednesday afternoon.

A longstanding agricultural property in northeast Tubac has been undergoing renovations as new ownership brings back a stocker cattle operation to the land.

The project got off on the wrong foot with some community members earlier this year, when work to level the land produced large clouds of dust. The dusty land-leveling has now wrapped up, according to a lawyer connected with the sale and re-development, but concerns remain about the nature and potential impact of the operation going forward.

Lawyer Mark Larkin – former part-owner of the Pajaros Migratorios Ranch, better known as the PM Ranch, and attorney for the new owners – said the concerns are overblown and that plans call for bringing back business models that have already been practiced there.

“There’s all kinds of misinformation… that there’s going to be a feedlot and stuff like that, but no,” Larkin told the NI. “It’s not that different from what it’s done before.”

Stocker cattle operations involve bringing in young weaned calves for grazing, with the goal of adding weight and value to the animals before they are sold.

Larkin said the PM Ranch operated as a stocker cattle ranch from 1992 to 2004, after which it was partly used for agricultural purposes. The owners of the ranch at the time, the Crebbs family, of which Larkin is an in-law member, also ran a cow-calf operation from 2003 to 2017 in which they bred calves and raised them until they were old enough to sell.

The ranch includes a 9,105-square-foot headquarters and various outbuildings, and is located mostly on the north side of Chavez Siding Road.

In preparation for bringing back the stocker cattle model, the new owners decided to re-level about 295 acres of ground to allow for better irrigation of the land that the cattle will be grazing, Larkin said. That resulted in the towering and sometimes invasive clouds of dust in May and June that upset some community members and led to an air-quality investigation by the Arizona Department of Environmental Quality.

A portion of the property had been irrigated and used for grazing previously, Larkin said, but the distribution of the water wasn’t very efficient on the uneven land. Another portion that had previously not been irrigated has now been prepared to be put into production as well.

(Note: Larkin said later that, in fact, all of the land that the ranch has or is planning to irrigate has been irrigated in the past, in accordance with state Active Management Area standards. “The PM is not expanding its irrigation beyond its existing grandfathered right,” he wrote in an email.)

Larkin added that the leveling of the property was finished at the end of June, after which the pastures were divided into paddocks for the cattle to graze.

“Paddocks are not pens at all,” Larkin said, in response to rumors that the PM Ranch operations would entail a feedlot that puts calves in tightly enclosed spaces. “A paddock is a division of a pasture, generally.”

He said that the pasture will be redivided depending on the number of cattle, weather, regrowth of grass, time of year and other factors, so it’s difficult to pinpoint exactly how large the paddocks will be at any given time.

Larkin added that the calves will generally stay on the property for a few months before getting sold, but it was also difficult to determine how many head of cattle will be allowed on the property, as that also depends on various factors.

County Supervisor Bruce Bracker, who lives in Tubac and represents the community on the board of supervisors, said he heard from a number of constituents about the dust problems at the ranch during the leveling operation. ADEQ conducted multiple air-quality tests at the time and didn’t find any violations of state standards, Bracker said, though he didn’t discount the complaints.

“We’ve seen other projects in Santa Cruz County where there was no dust from laser-leveling,” he noted.

Then, after hearing rumors and fears about what the cattle operation might bring in the future, Bracker went to the ranch and met with the owner, Kirk Sinclair, a cattleman with operations in Western Canada. He said Sinclair described his plans and allayed many of Bracker’s concerns.

“It’s not a concentrated feeding area, so the animals will be grazing on whatever they’re growing for them,” he said. “They’ll be grazing in the pastures, which means you’re not going to have that concentration of the manure or the smell, or even the flies.”

As for truck traffic on Chavez Siding Road – another worry expressed by locals – Bracker said Sinclair told him he expected 10 cattle trucks coming into the ranch each year, and 20 going out.

In June, the board of the Santa Cruz Valley Citizens Council, a community organization in Tubac, sent an email to its membership regarding the leveling and other activities at the PM Ranch. Among the issues the message addressed was the potential impact of the cattle operation on the Santa Cruz River, which flows north through the ranch.

Citing a conversation with Larkin, the board said he told them that the paddocks are intended to retain all water onsite, and since there is no “point source” of discharge into the river, there is no regulatory obligation with the state.

“We confirmed his statement with storm water staff at ADEQ,” the citizens council board said in its message, adding: “There is concern that pollution from the paddocks could pollute the Santa Cruz River by going into ground water and making its way to the river. This is a potential problem for many forms of agricultural activities and to our knowledge there are currently no regulatory standards in place.”

Larkin reiterated to the NI this week that the overhaul of the irrigation system at the ranch was done with the intention of keeping the irrigation water in the fields, and added that berms had been constructed for that purpose.

And while the ranch at one time grazed cattle in the river and along its banks for short periods during the dormant winter season, Larkin said there are no current plans to resume the practice.

Ben Lomeli, president of Friends of the Santa Cruz River, said in an email that his organization is aware of the concerns expressed by some local residents about the potential impact of the PM Ranch operation, “but we have not yet taken any position on this project because we are still in a fact-finding phase.”

In a follow-up report to its membership on July 13, the Santa Cruz Valley Citizens Council board noted that cattle had been brought to the ranch, indicating it was moving into the operational phase.

The board said that some of organization’s members, as well as other residents, had been contacting government officials and agencies seeking information or requesting action.

“It is our perception that there are potential air quality and water quality issues and perhaps flooding issues,” the board wrote, though it added that it didn’t have sufficient information at this point to take any firm position. It also said it was working on setting up an on-site meeting with the owners or their representatives.

The NI reached out this week to the contact email address listed on a Facebook page created in opposition to changes at the ranch, but there was no response as of press time.

Bracker said he took some of the numbers Sinclair provided him regarding the scale of the operation and shared them with experienced cattlegrowers to get their perspective.

“They’re like: ‘Totally doable. People are not gong to have a problem with this,’” he said.

Bracker said he understood the local concern “because they were thinking it’s a feedlot operation, it’s across the street from their houses. People, rightly so, are very concerned about what happens to their homes.”

But the fact that the plan calls for open-field grazing and not a concentrated feed operation – which would require a special permit for the state – is “a real benefit for us,” he said.

“It’s creating some jobs and it’s something that once existed in the county on this ranch – it’s what they used to do there,” Bracker said, adding later: “Somebody could have bought that ranch with the vision of rezoning it for a housing development.”

That’s what almost happened in 2007, when developer Andy Courtney and the Crebbs family sought to convert the PM Ranch Ranch into Las Mesas de Santa Cruz, a development of up to 2,630 homes and a retail center. The county supervisors at the time voted 2-1 to amend county density regulations and allow the developers to apply to re-zone the property, but opponents were able to get a referendum on the decision on the November 2008 ballot and ultimately defeated it.