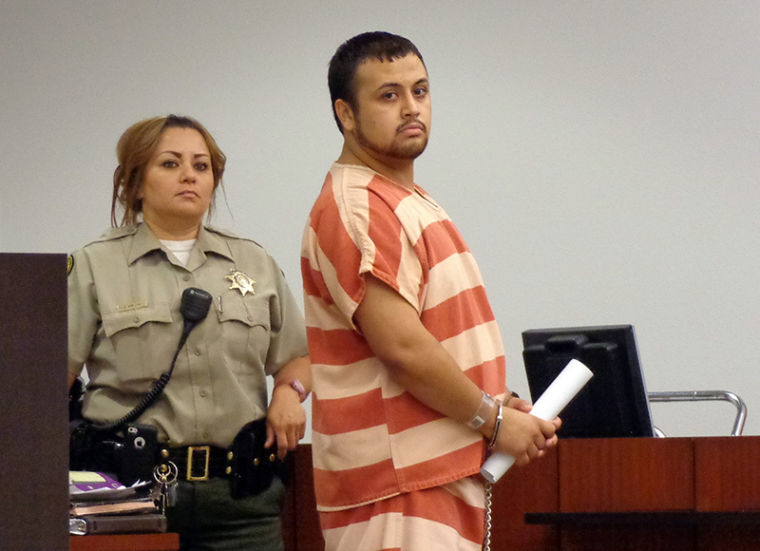 Eduardo Hernandez appears at a hearing Monday at Superior Court at which Judge James A. Soto sentenced him to 2.5 years in prison for a 2011 aggravated assault. 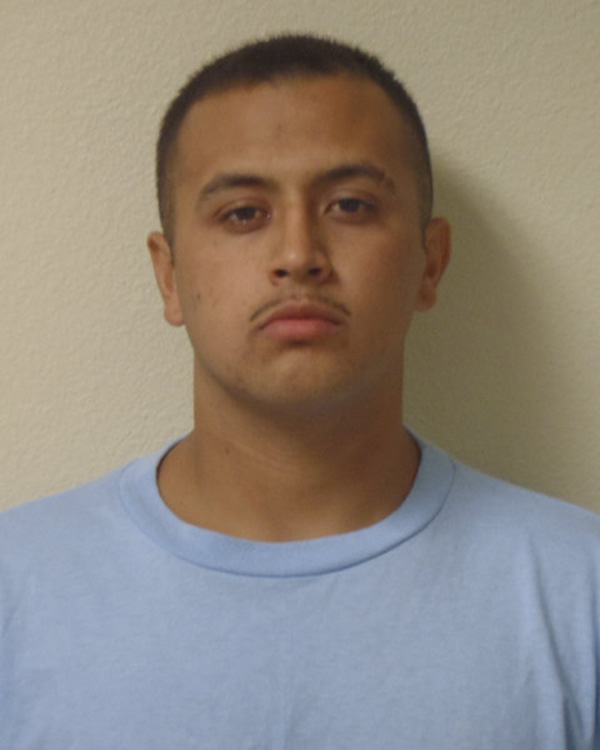 Eduardo Hernandez’s 2010 booking photo from the Arizona Department of Corrections. Judge Anna Montoya-Paez sentenced him to a year in prison after he failed to abide by the rules of his probation for an endangerment conviction. 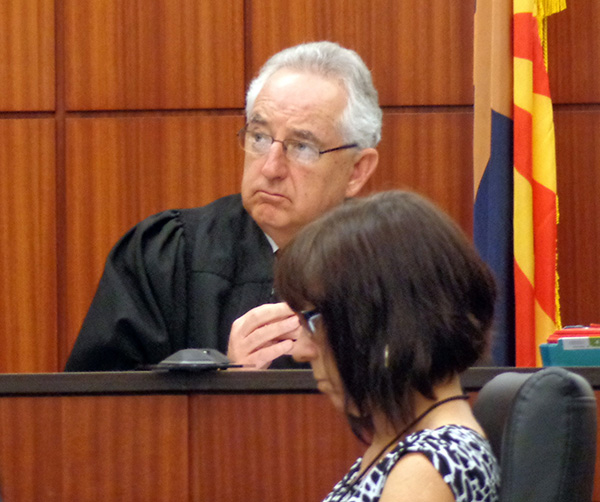 Eduardo Hernandez appears at a hearing Monday at Superior Court at which Judge James A. Soto sentenced him to 2.5 years in prison for a 2011 aggravated assault.

Eduardo Hernandez’s 2010 booking photo from the Arizona Department of Corrections. Judge Anna Montoya-Paez sentenced him to a year in prison after he failed to abide by the rules of his probation for an endangerment conviction.

A man accused of a violent home invasion in Nogales after which a key witness was murdered in Mexico has a history of criminal convictions – several for violent offenses – for which he’s been punished with repeated chances at probation.

However, court records show that 25-year-old Eduardo Hernandez of Nogales has chronically failed to abide by the terms of his probation, flunking drug tests and allegedly committing crimes ranging from DUI to kidnapping while in a house arrest-type program known as intensive probation supervision, or IPS.

On Monday, Hernandez was back at Santa Cruz County Superior Court, hoping that Judge James A. Soto would once again reinstate him to the IPS that he received in a 2011 aggravated assault case despite his latest series of missteps, one of which included an alleged home invasion on Jan. 25 in which he and another suspect reportedly assaulted a man with a handgun and machete.

Instead, Soto sent him to the Arizona Department of Corrections for 2.5 years, with credit for 179 days already served.

“You committed a serious crime originally. You could have killed that person or seriously injured that person,” Soto told Hernandez. “And you were given an opportunity not once but … twice to successfully complete probation, and you didn’t do that.”

Soto initially sentenced Hernandez to three years of IPS – plus 120 days in jail – in July 2012 after he pleaded guilty to one count of aggravated assault causing temporary but substantial injury, a Class 4 felony. The conviction stemmed from an incident on Oct. 20, 2011 in the Walnut Street area in which Hernandez, allegedly backed by a group of baseball-bat-wielding friends, punched another man in the face, breaking his nose. Witnesses said Hernandez was wearing brass knuckles at the time.

According to a petition from the Adult Probation Department, while on probation for the conviction, Hernandez tested positive for marijuana and cocaine on multiple occasions, and was arrested on Feb. 10, 2013 on DUI and drug possession charges. Still, at the recommendation of the probation department, Soto reinstated Hernandez to the original three-year term of IPS during a hearing on April 22, 2013.

Then on Jan. 29, Hernandez was arrested by Nogales police and charged with burglary, kidnapping and assault in the alleged Jan. 25 home invasion at the Casas de Anza public housing complex off Western Avenue. The alleged victims in the attack were 22-year-old Antonio Coronado, his 19-year-old girlfriend and an unspecified child. Hernandez allegedly held a gun to Coronado’s head and accused him of snitching to police about a drug load – a charge Coronado denied. Meanwhile, Hernandez’s accomplice cut Coronado on the leg with a machete.

The day after that arrest, the Adult Probation Department filed a petition once again accusing Hernandez of violating his probation in the 2011 aggravated assault case. In addition to his arrest on the home invasion charges, the document alleged, Hernandez had failed to reside at his required address on 14 occasions between June 14 and Dec. 24, 2013.

He had also failed to complete his community service requirements, the probation department said – the only one of the alleged violations Hernandez agreed to admit to as part of a subsequent plea deal with the County Attorney’s Office.

Hernandez was released from the county jail on Feb. 14 after posting a $20,000 cash bond. At that point, police allege, he began a campaign to persuade Coronado and Coronado’s girlfriend (who is also Hernandez’s cousin) not to cooperate with the state in the home invasion case. The victims were allegedly contacted on Feb. 22, March 3 and March 5, and then again on March 14. On March 16, Antonio Coronado and his 20-year-old brother Adrian were shot and killed in Nogales, Sonora, reportedly after Antonio Coronado responded to a call claiming that his girlfriend’s mother had been hospitalized in Mexico.

Hernandez was arrested again the night after the murders and charged with interfering with a criminal investigation; the charges stemmed from the alleged witness tampering, not the murder of the Coronado brothers (there have been no arrests yet in the killings). The Adult Probation Department subsequently updated its petition to revoke Hernandez’s probation in the 2011 aggravated assault case to include the witness tampering arrest.

In a handwritten letter submitted to Soto on April 15, Hernandez recognized that the judge had sentenced him to three years of IPS on July 30, 2012, but said: “During that time I have only had one issue that was resolved in April of 2013. Since then I have done well to follow the rules and live a productive life.”

He asked Soto for a third shot at probation, noting that he and his girlfriend are expecting a child later this year, and that he has a work opportunity with a local handyman service.

“Should you decide to re-instate my probation I would complete it without further issues,” Hernandez wrote. “It is time I got my act together not only for myself, but for my new family I am proud to have.”

Defense lawyer Matthew Davidson told Soto during Monday’s hearing that Hernandez had been trying to make up the community service he missed earlier in the year. And he argued that Hernandez had dutifully completed the aspect of his probation that addressed a drug addiction that contributed to his crime.

“I think one of the major issues of his particular probation was drug addiction, and the court ordered major counseling requirements. And the fact of the matter is, is that unlike a lot of people the court sees and sentences, he did them all, 100-percent satisfactory, and has the certificates to prove it,” Davidson said.

Davidson asked Soto to extend Hernandez’s probation to four years, including one more year of IPS, and punish him with more time in the county jail. Hernandez told the judge: “I can do it. I would just like an opportunity.”

For her part, Deputy County Attorney Liliana Ortega told the judge that “Mr. Hernandez has shown that he’s no longer a viable candidate for probation,” and asked for a prison sentence.

She recalled the brass-knuckle assault conviction in 2011, saying:

“Despite that violent offense, Your Honor placed him on probation and gave him some significant jail time – which apparently didn’t make any difference – and (he) continued to violate probation. He’s violated his probation twice.”

Hernandez’s recent behavior has apparently attracted the attention of authorities at U.S. District Court in Tucson, where he is currently serving two years of supervised release for a human-smuggling conviction. Federal court records show that a deputy U.S. marshal served Hernandez with a warrant on March 13 to answer to a probation violation petition.

In that case, Hernandez was arrested on June 1, 2012 at the Border Patrol’s checkpoint on Interstate 19. According to a criminal complaint, agents stopped him while driving a red Chrysler PT Cruiser in which a passenger named Ariel Meza-Flores presented agents with a fraudulent Mexican passport with an employment authorization stamp.

Meza-Flores reportedly told authorities that he had paid $2,000 to be smuggled into the United States. After illegally crossing the border fence, he said, he was taken to a local hotel where he was given the fake passport and told to wait for a red car to arrive. Hernandez later arrived at the hotel driving the red Chrysler.

Hernandez eventually pleaded guilty to one felony count of transportation of an illegal alien for profit, and on March 25, 2013, U.S. District Judge David Bury sentenced him to time served and two years of supervised release.

Soto asked Davidson on Monday about the status of the probation revocation case in federal court. Davidson said he does not represent Hernandez in that case, but his experience in federal court is that while judges sometimes allow reinstatement to probation, “there is always a term of prison.”

When Soto sentenced Hernandez to state prison on Monday, it was the second time a local judge had sent him to prison after failing to adhere to a probation sentence.

On Aug. 10, 2009, Judge Anna Montoya-Paez of Santa Cruz County Superior Court sentenced Hernandez to a total of three years of IPS, plus six months in jail, for a pair of criminal convictions. In one case, Hernandez pleaded guilty to endangerment, a Class 6 felony, as the result of a vehicular collision he caused on April 25, 2008 that resulted in injuries to others. In the other, he pleaded guilty to one count of aggravated assault on a minor, a Class 1 misdemeanor, after he reportedly punched two boys ages 14 and 15 in the face with a closed fist for allegedly teasing his sister. One of the boys was his cousin, court documents say.

Then on April 5, 2010, the Adult Probation Department filed a petition accusing Hernandez of a variety of violations, including failure to reside at the required address, failing to pay court-mandated fees, and having an unspecified contact with law enforcement on Jan. 15, 2010. On Sept. 13, 2010, Montoya-Paez revoked Hernandez’s probation and sentenced him to one year in state prison for the endangerment conviction and six months in the county jail for the assault. She allowed the sentences to be served concurrently.

“You have a criminal history here, including a prior assault. You seem to have some significant issues with controlling your anger,” the judge told him.

“It strikes me that you have some significant anger issues that you were not able to control, and that you have not taken what I consider to be the breaks that I gave you, not once but twice…”

The charges against Hernandez in the Jan. 25 home invasion include one count of burglary, two counts of kidnapping and five counts of aggravated assault with a deadly weapon. A judge has found probable cause for those charges to proceed at Superior Court, and a hearing on the matter is set for 1:30 p.m. on May 19.

Hernandez is scheduled for a probable cause hearing on the interfering with a criminal investigation charges at 2 p.m. on May 7 at Nogales Justice Court.

Man killed in Sonora was witness in Arizona home invasion

A local man who was shot and killed in Nogales, Sonora last month was the alleged victim of a home invasion in late January in Nogales, Ariz. …