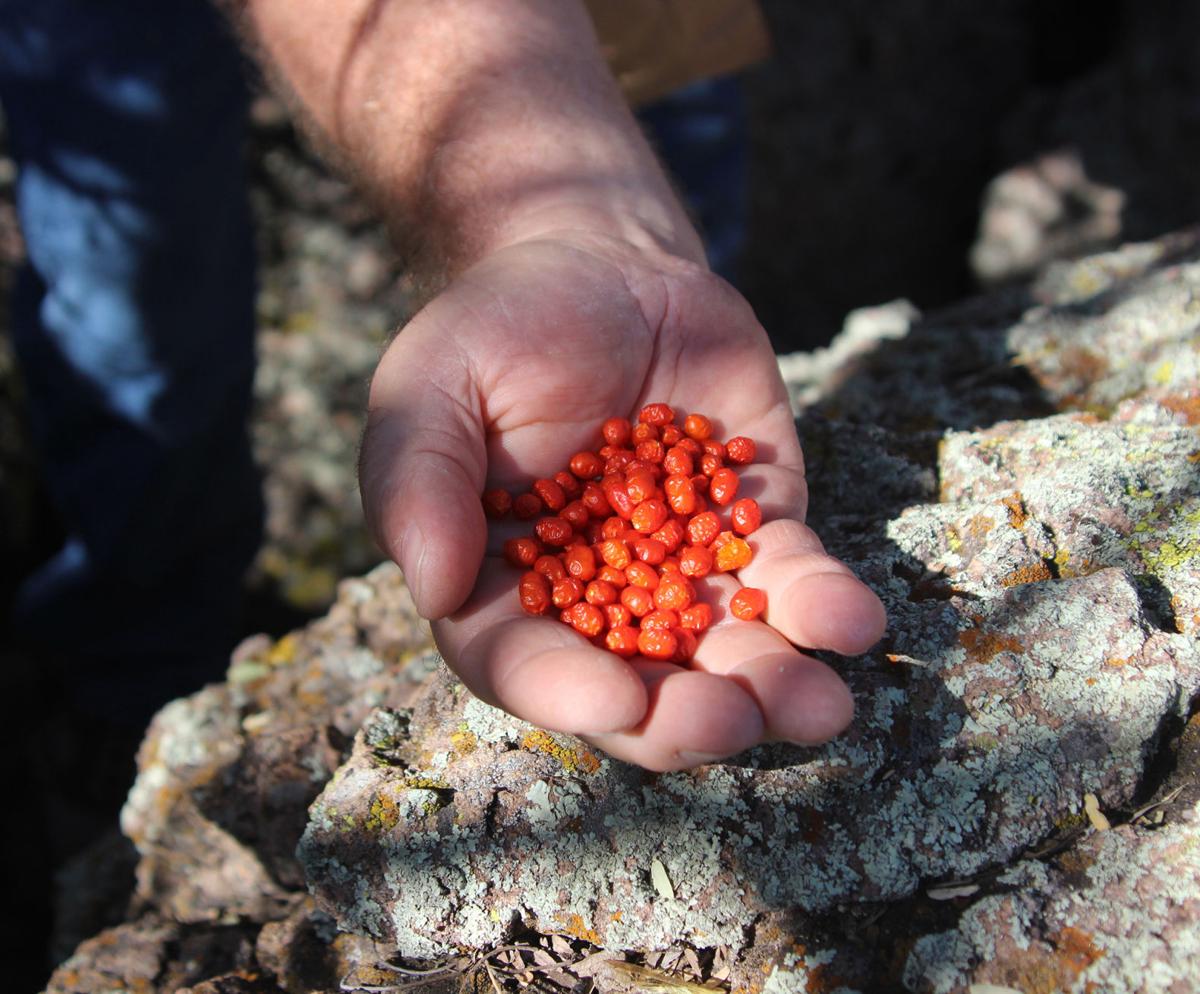 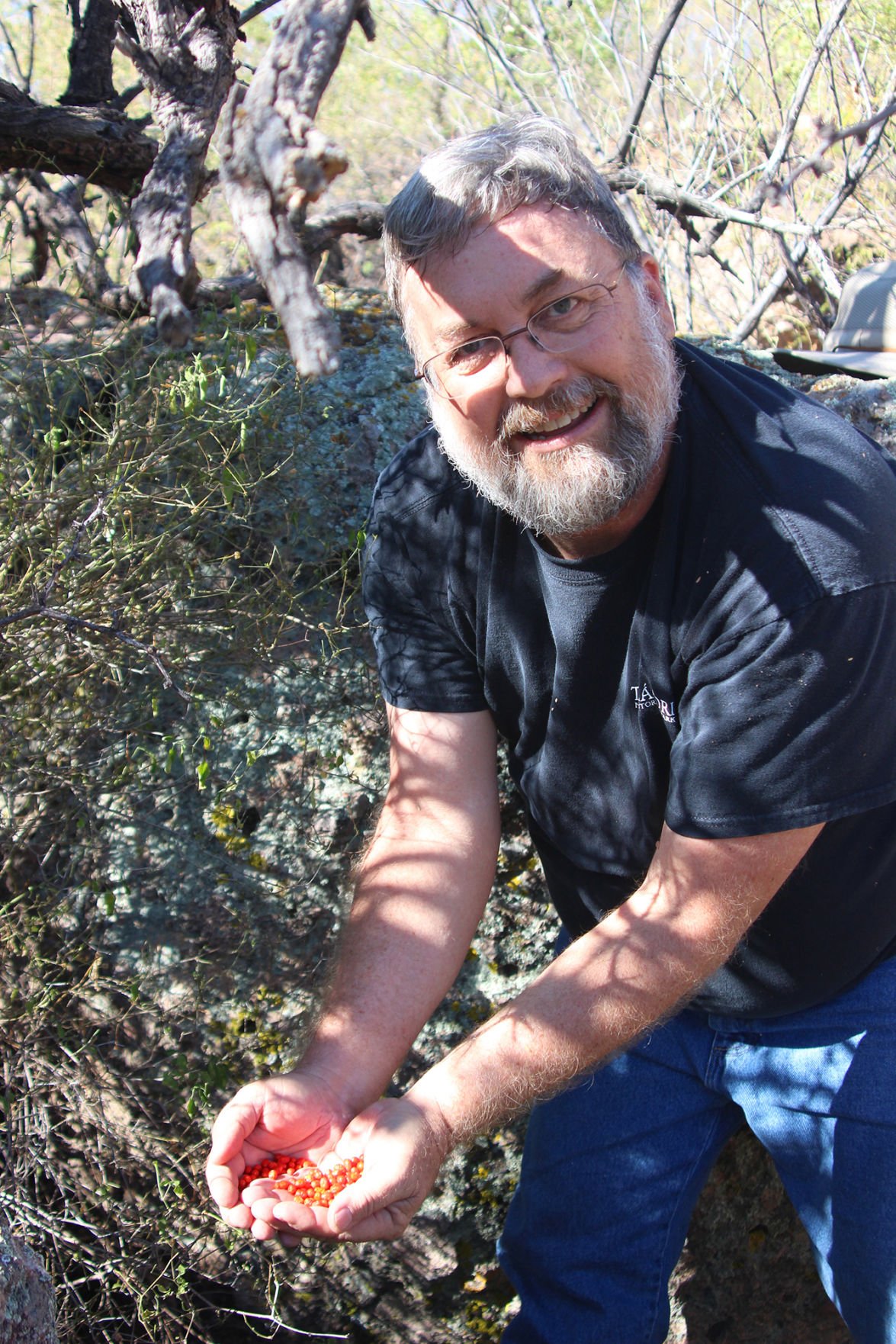 Standing next to a mostly bare chiltepin plant, Kevin Dahl, who helped found the Wild Chile Botanical Area, holds chilies he brought along for the hike. 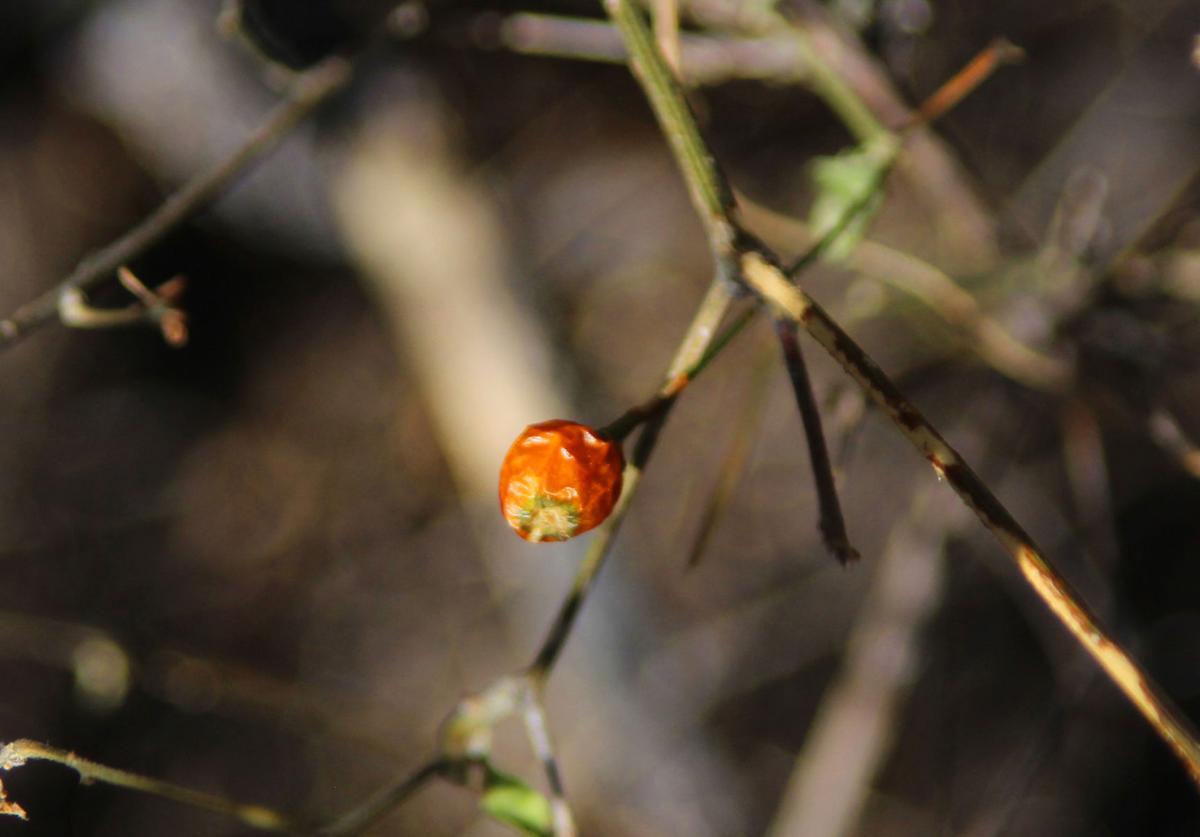 One of the few dried-up chiltepins found on the hike. 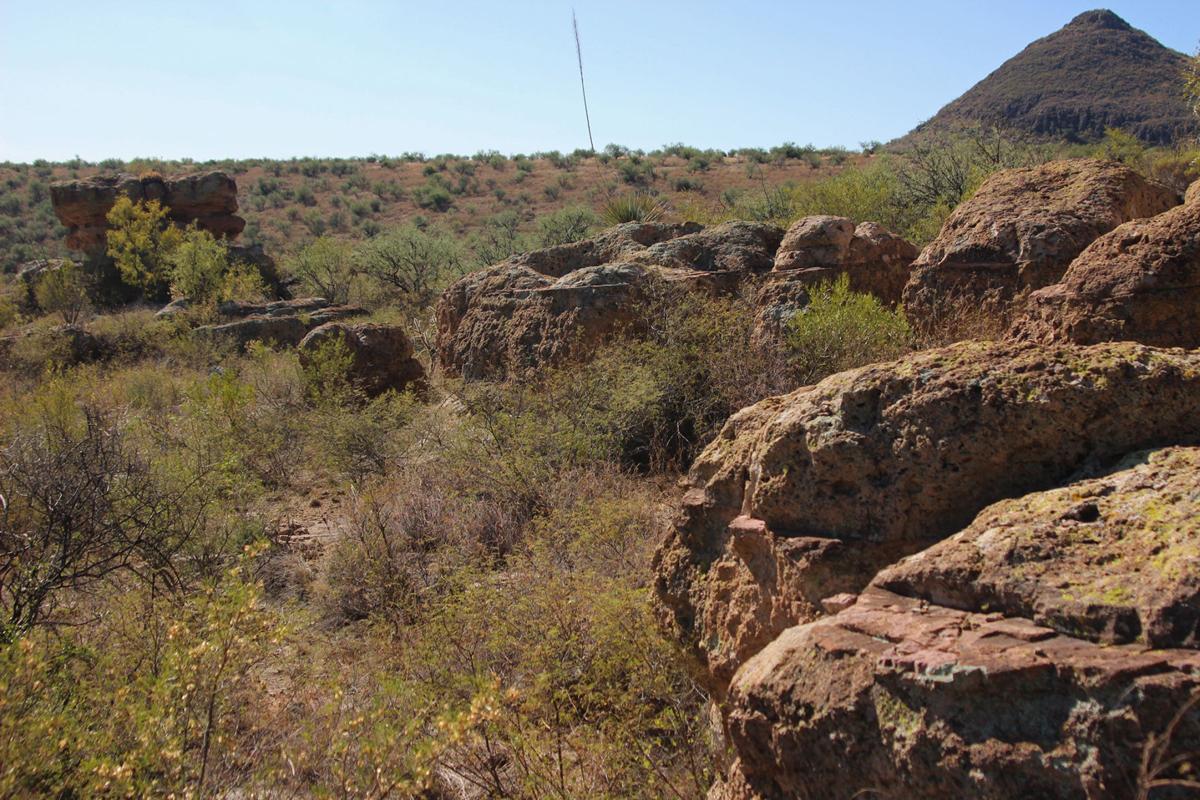 The Wild Chile Botanical Area is located in Rock Corral Canyon, a dense, rocky area in the Tumacacori Mountains. 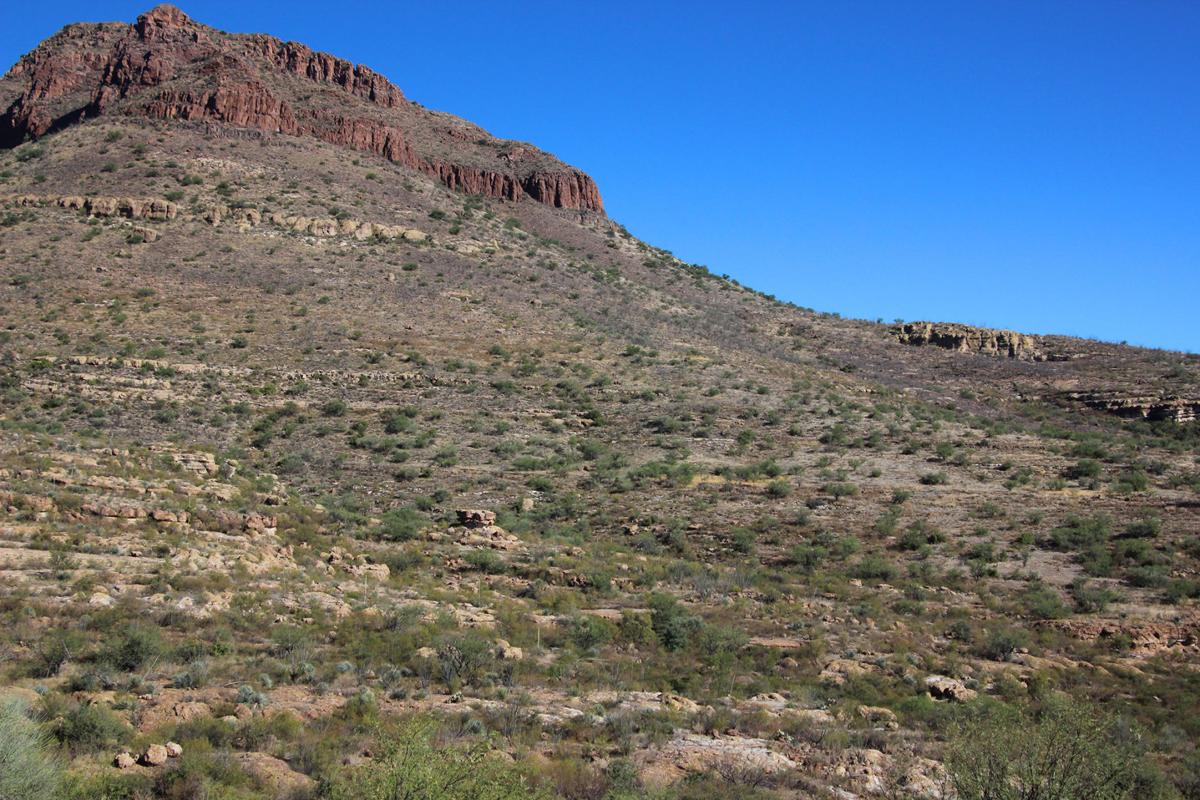 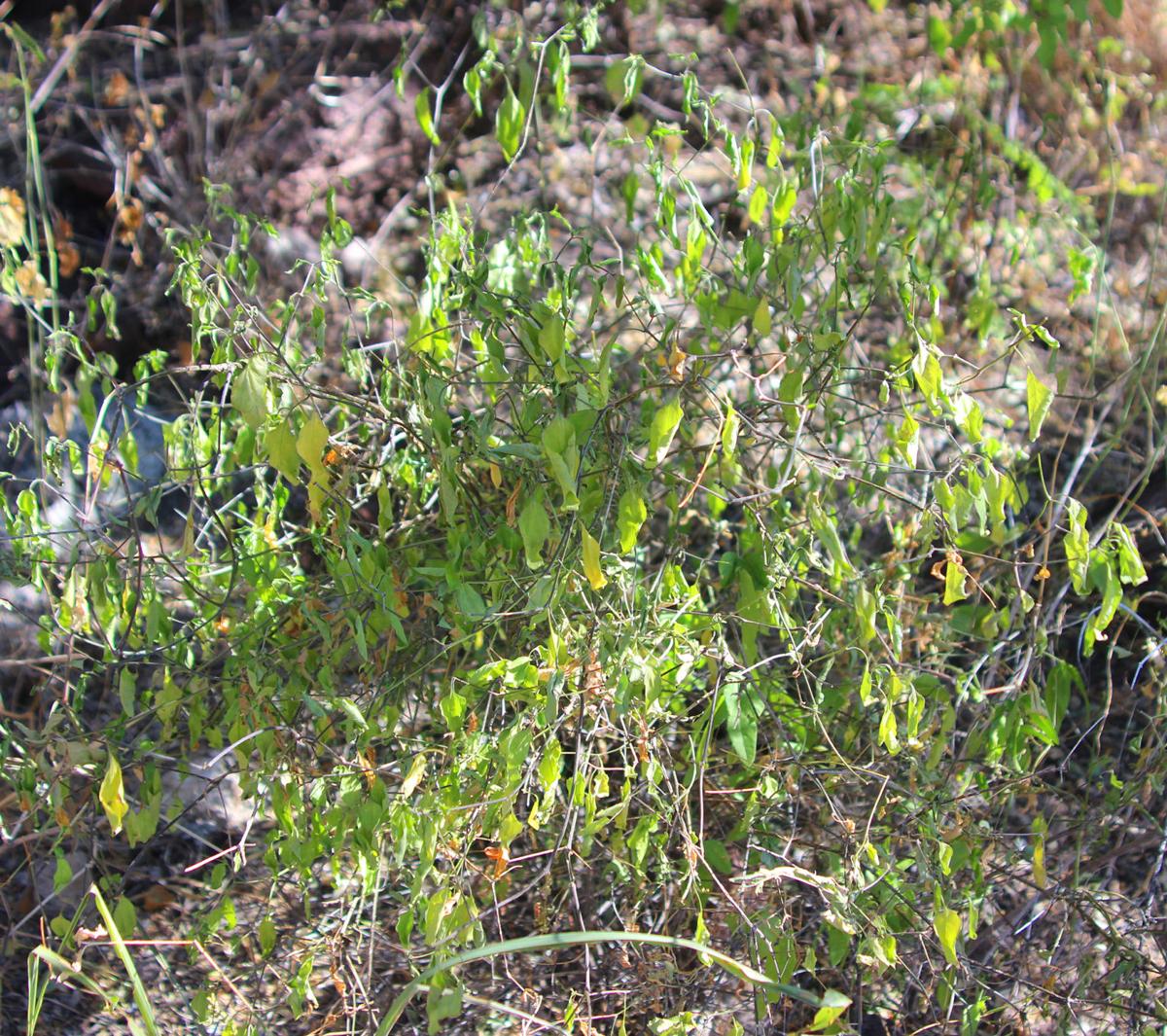 Standing next to a mostly bare chiltepin plant, Kevin Dahl, who helped found the Wild Chile Botanical Area, holds chilies he brought along for the hike.

One of the few dried-up chiltepins found on the hike.

The Wild Chile Botanical Area is located in Rock Corral Canyon, a dense, rocky area in the Tumacacori Mountains.

After enduring a bouncy drive up a rough road heading into the Tumacacori Mountains last Tuesday morning, the group of hikers crossed a shallow rocky canyon on foot. Then, after bushwhacking through spiky desert plants and looking under trees, they found their prize: a single bright red, shriveled chili clinging to a dry chiltepin plant.

The fruit of the chiltepin isn’t always so hard to find at this spot, said Kevin Dahl, an ethnobotanist specializing in desert plants. The dry second half of the monsoon season caused the plants to produce fewer chilies, and then birds swooped in to eat most of the crop.

“At the right time of year, they’re big, bushy green and full of red chilies,” Dahl said of the plants.

Dahl, a Tucson resident, was searching for chiltepines in the Wild Chile Botanical Area, a 2,500-acre protected area on Coronado National Forest land in Santa Cruz County. The chiltepin, an especially hot, small round chili that serves as a staple of Sonoran cuisine, is known as the mother of all peppers because it’s the wild ancestor to many domesticated chilies.

This area, located in the rugged Rock Corral Canyon west of the Tumacacori/Carmen exit on Interstate 19, is probably little known to most local residents. But it’s a biologically significant place, said Gary Nabhan, a Patagonia resident and world-renowned ethnobotanist.

“It’s the northernmost viable population” of chiltepines, he said. “That’s code word for having enough plants where they’re not going to go under if we have a bad freeze.”

Research in the botanical area has led to at least a dozen papers and three books, Nabhan said. One of the most important discoveries was made by Nabhan himself, who learned why chilies benefit evolutionarily from being hot: the spiciness prevents mammals from eating and destroying the seeds, but birds aren’t bothered by the flavor and can help disperse the seeds.

Nabhan said the Wild Chile Botanical area, created in 1999, was the first preserve on U.S. public lands meant to protect a wild relative of a crop. Now there are areas dedicated to crops such as wild cotton, walnuts and manioc.

“We need these places where (chiltepines are) protected from bulldozing or spraying or other kinds of destructive activities,” Nabhan said.

A jar of chiltepines and chiltepinero – a mortar and pestle, often wooden and decorative, specifically meant for the chilies – are a staple of the Sonoran dinner table, said Alex La Pierre, program director of Border Community Alliance, a Tubac-based nonprofit that promotes community relations between Southern Arizona and Sonora.

“It’s almost a requisite,” he said, calling the chili the region’s “go-to spice.”

La Pierre, a Tumacacori resident who leads tours throughout Sonora, said the spicy chiltepin is an acquired taste.

“The pain of the chili starts to provoke endorphins as a response in your brain, and so that’s where you gain your love for chili,” he said.

Every fall, La Pierre said, Sonorans hike into the mountains to harvest the wild chili.

“It’s really kind of a traditional folkway of the people,” he said.

Once they are harvested and dried out, chiltepines are used to spice up everyday food like beans and menudo, but also to create a special chili-flavored flan in Banámichi, Sonora, La Pierre said. The chili is also popular north of the border and can be found in any Food City grocery store. La Pierre said he’s seen chiltepin-flavored vinegar at the Tubac Market and enjoys chili-infused coffee at Exo Roast Co., a Tucson-based coffee shop.

Nabhan said the popularity of chiltepines has led to high prices – about $80 per pound.

“It can make more money off a single acre than you can make off growing marijuana,” he said.

A recent study found that chiltepines are over-harvested in the Mexican states of Sonora and Baja California, Nabhan said. The Wild Chile Botanical Area, he said, is “a counterpoint to that, where we can see what a healthy community looks like.”

While people can collect chiltepines in the area for personal consumption, Nabhan said, it’s illegal to sell them.

Dahl said the Wild Chile Botanical Area is ideal for chiltepines because it’s located on a south-facing slope, which means the plants are warmed by the low winter sun, which can help avoid freezing.

“Abundant rocks and trees to grow under (and) plenty of birds to disperse the seeds” also make the landscape a prime chiltepin environment, he said.

Nabhan said he first learned about the area in the late 1970s from Jack Kaiser, a late Nogales resident and USDA inspector. Through speaking with the local Hispanic community, Nabhan learned that some people harvested chilies in the area through the 1970s. And a Tohono O’odham man told him that Tumacacori means “place of the little round chilies” in O’odham.

In the early 1980s, Nabhan co-founded Native Seeds/SEARCH, a Tucson-based seed conservation nonprofit. Dahl eventually served as executive director of the organization. In the mid-1980s, Nabhan said, he began working with Dahl and other Native Seeds staff, the Forest Service, and local ranchers to protect the area until it received its official designation in 1999.

Jean Neubauer, who owns Santa Cruz Chile & Spice Co. in Tumacacori and whose family has leased grazing rights in the area since the 1930s, said she was excited when Nabhan approached her and her family about the project.

“The fact that (the chiltepines are) up there and kind of mysterious is kind of cool,” she said.