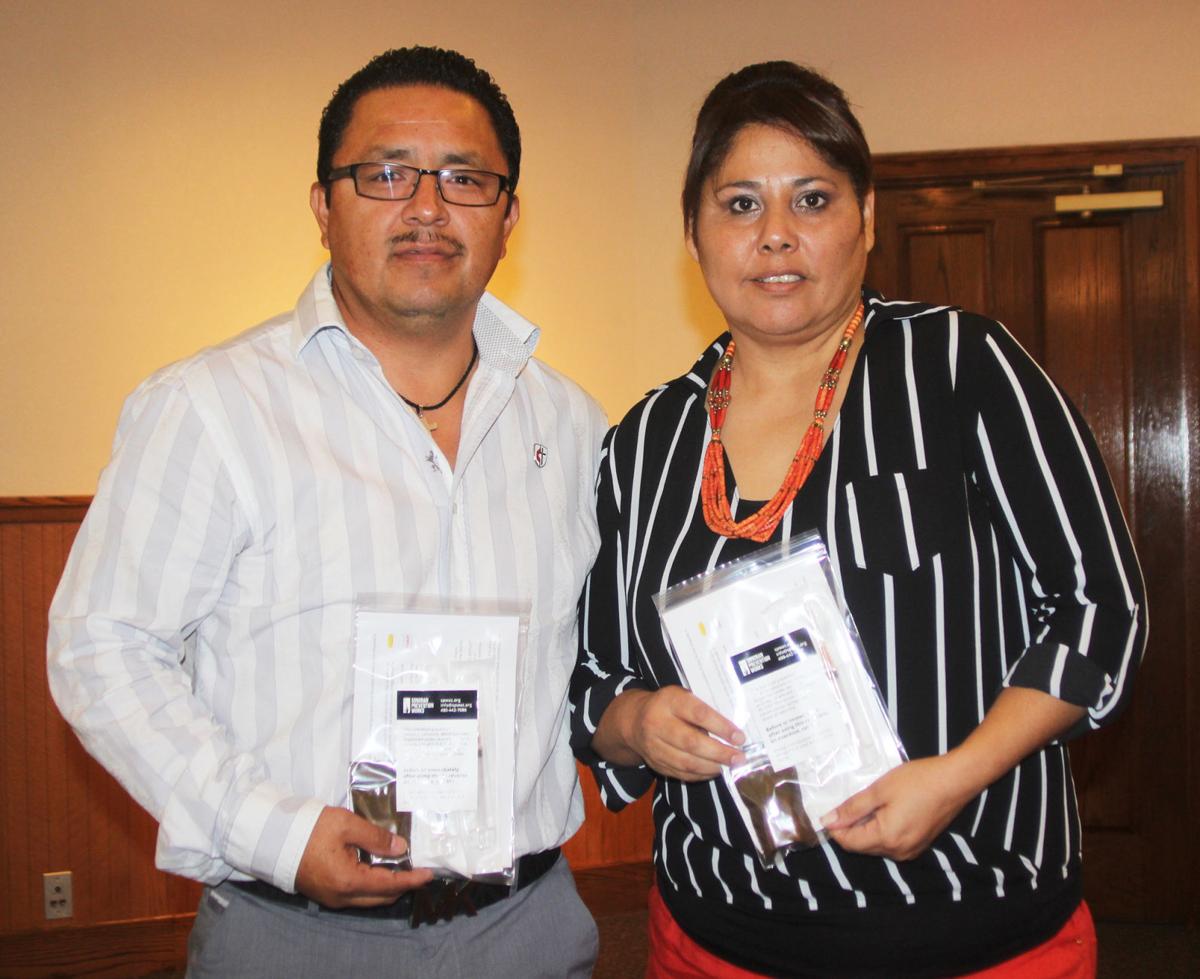 Maritza and Raul Velasquez, both pastors at the United Methodist Church in Nogales, hold their new naloxone kits, which include vials of the drug, syringes and instructions. They said they wanted to learn how to administer naloxone after Maritza’s mother had an accidental overdose. 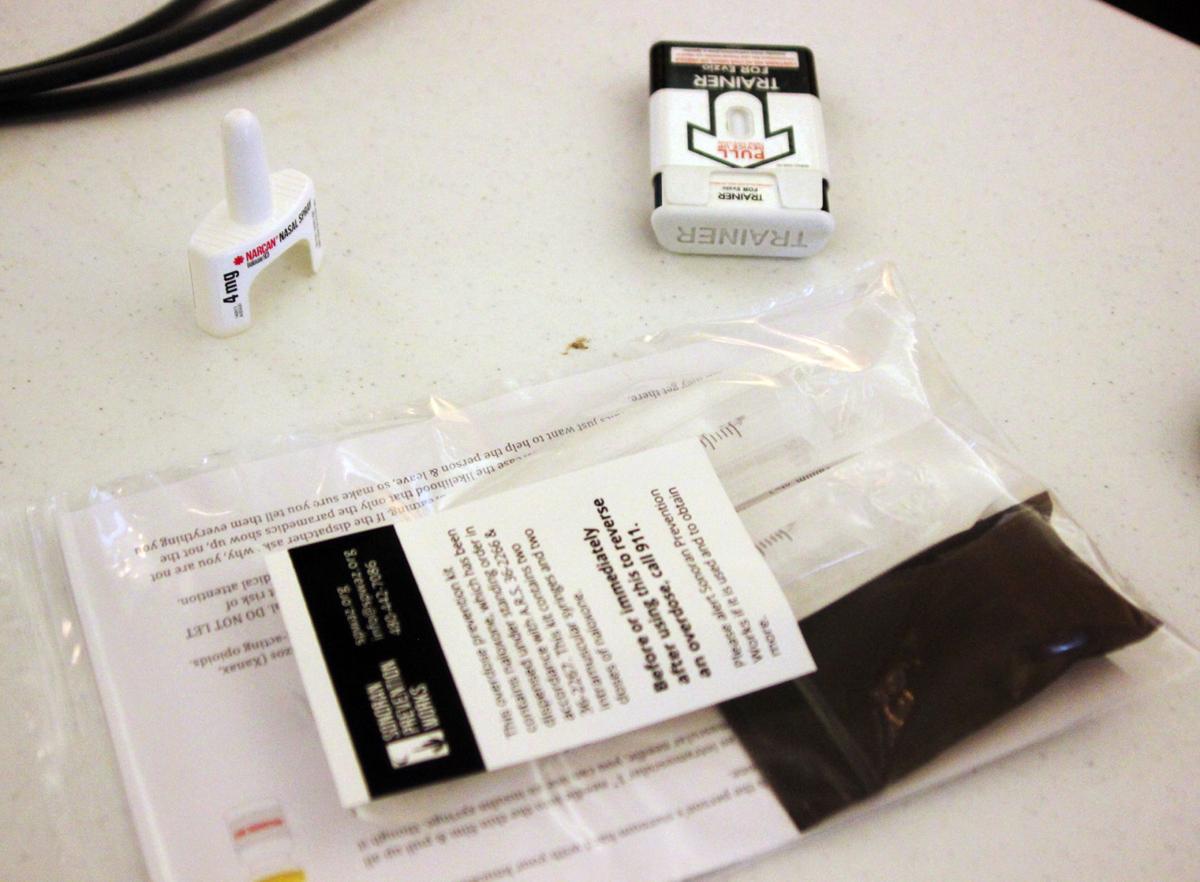 Naloxone can be delivered through a nasal spray (top left), automatic injector (top right) or syringe (inside the bag). 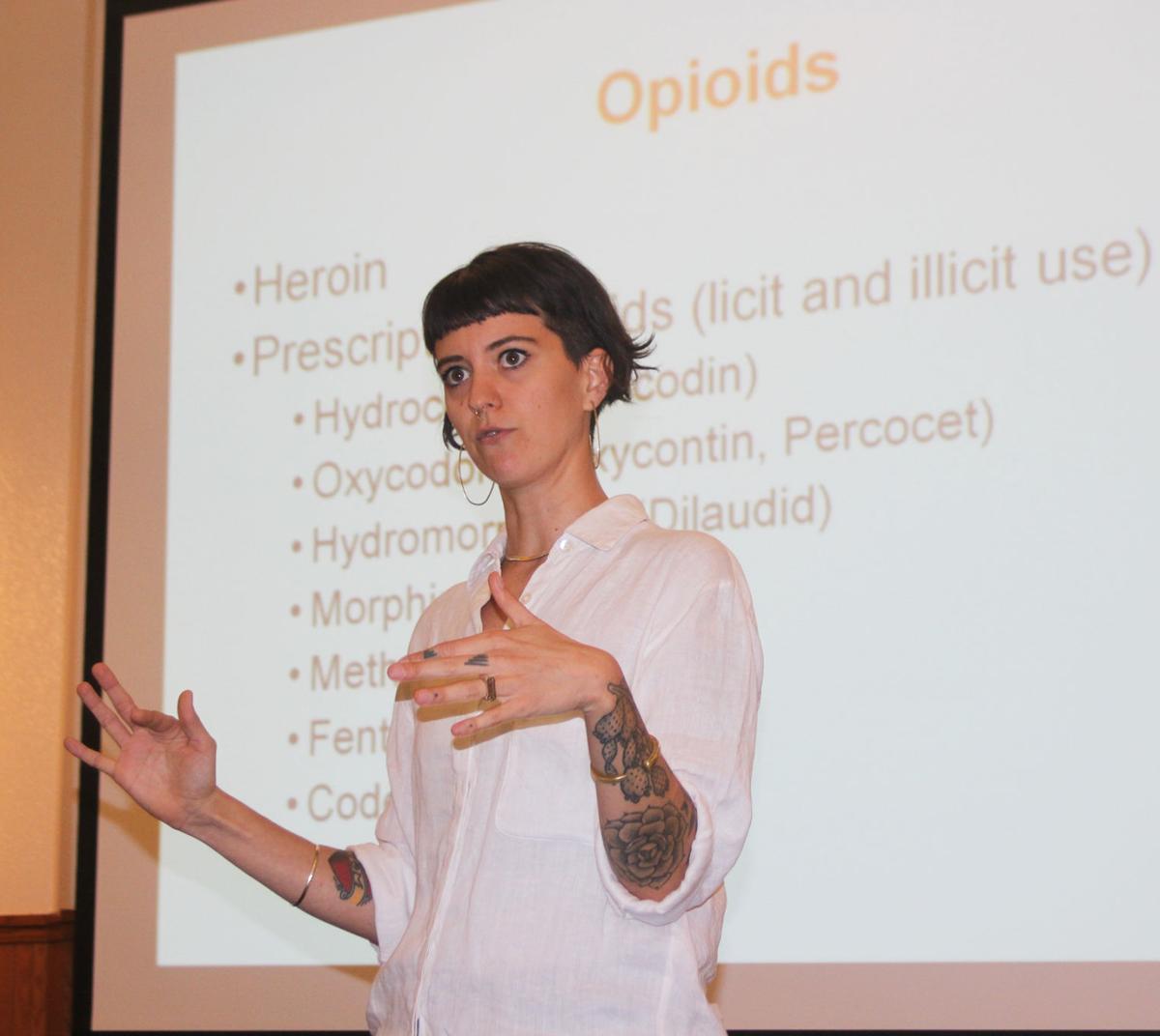 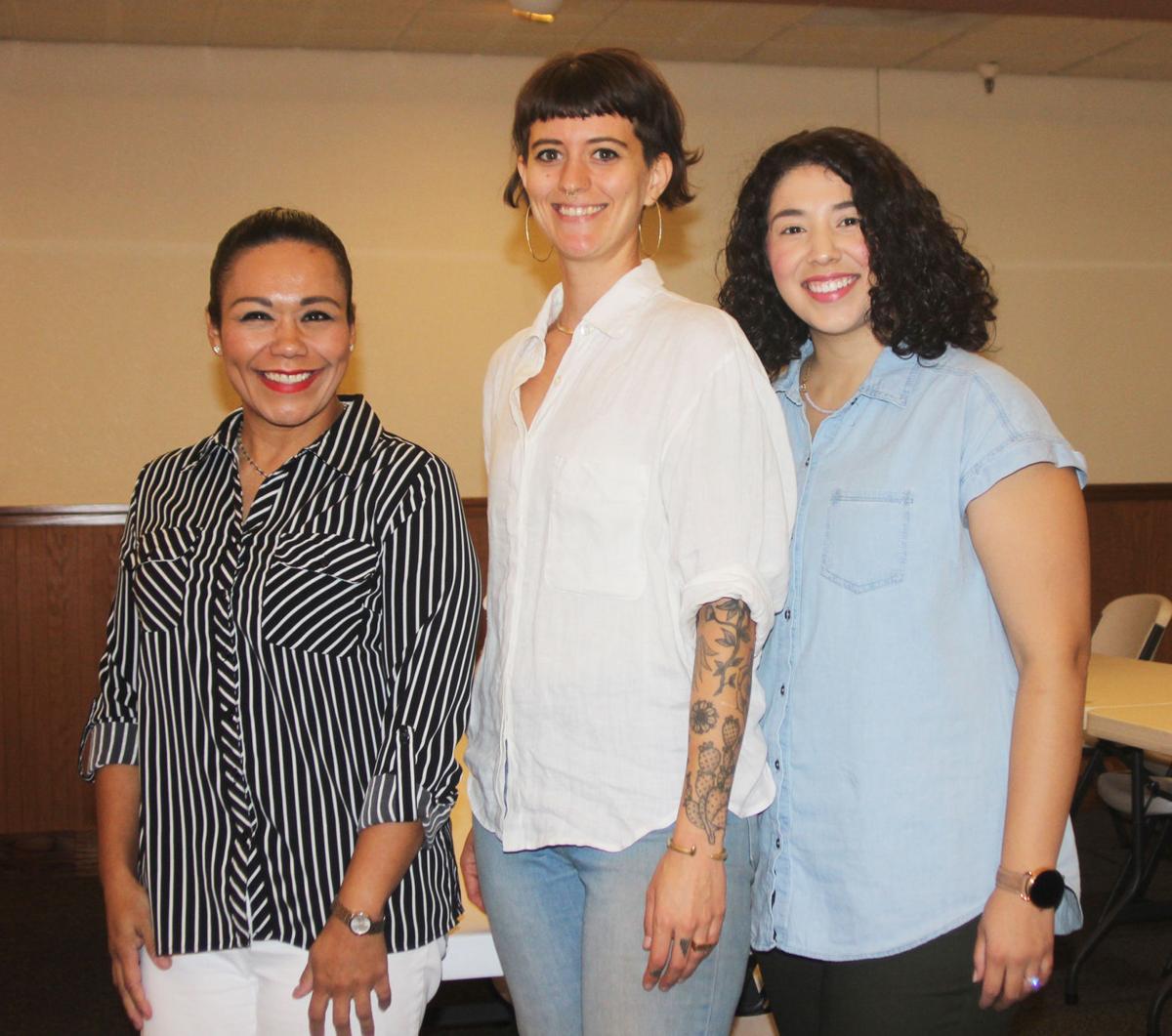 Maritza and Raul Velasquez, both pastors at the United Methodist Church in Nogales, hold their new naloxone kits, which include vials of the drug, syringes and instructions. They said they wanted to learn how to administer naloxone after Maritza’s mother had an accidental overdose.

Naloxone can be delivered through a nasal spray (top left), automatic injector (top right) or syringe (inside the bag).

More than 40 people, including first responders, health care workers, clergy, school staff and ordinary citizens, turned out last Friday for a training in Nogales on a drug used to treat opioid overdoses.

And while statistics suggest that Santa Cruz County has not been ravaged by the opioid epidemic to the extent of other areas of the state and country, the level of interest and cross-section of attendees at Friday’s session illustrated growing local concern over the crisis.

“It just speaks as a testament that this is an issue and it’s touching every sector of the community,” said Eva Zuniga, a prevention specialist at the Santa Cruz County Drug Free Community Coalition (SCCDFCC), a co-sponsor of the event.

According to the National Institute on Drug Abuse, opioids are a class of drugs that include the illegal drug heroin, synthetic opioids such as fentanyl, and legally prescribed pain relievers like oxycodone, codeine and morphine. In 2016, state health data shows, 790 Arizonans died from opioid overdoses, a 74-percent increase over the previous four years.

In Santa Cruz County, there were only four opioid deaths in 2016, according to Dr. Gregory Hess, chief medical examiner in Pima County. But community and public safety leaders say locals are using opioids and it’s best to be prepared in case usage and overdoses increase.

Maritza Velasquez, a 43-year-old Nogales resident, has seen the need for preparation first hand. About eight months ago, she called 911 after she couldn’t get in touch with her mother. Once first responders arrived at her mom’s house, she said, they knocked down the door and found her unconscious and hypothermic from an accidental overdose of oxycodone, her prescribed pain medication.

The responders gave Velasquez’s mother naloxone, a drug that quickly – albeit temporarily – blocks the effects of an opioid overdose. Then they rushed her to the hospital.

Velasquez, like a number of others, attended Friday’s event so she could learn to use naloxone herself.

“We can have it at home and we can take care of it,” she said.

At the end of the training, people could take home kits filled with vials of naloxone, syringes, and instructions on using the drug and caring for the patient until an ambulance arrives.

Many of the attendees were administrators, nurses, security guards and other staffers from Nogales Unified School District.

“We know (opioids are) present in the county so we just want to be proactive and make sure that if it works its way into our school system that we’re already prepared,” said Angel Canto, NUSD assistant superintendent.

Student Services Director Judith Mendoza-Jimenez said there has never been an overdose at NUSD, but naloxone kits will now be kept at all of the district’s schools.

“We don’t foresee anybody having an overdose, but training and awareness is the most important thing for us,” she said.

Ray De La Ossa, a Nogales Police Department officer stationed at Nogales High School, called the event “a real good training” for school personnel. He said his fellow NPD officers rarely encounter opioid emergencies, and he was interested to learn that many drug users and their friends are hesitant to call 911 for help because they are afraid of getting in trouble.

Raul Velasquez, husband of Maritza Velasquez and, like his wife, a pastor at the Nogales United Method Church, said he knows members of their church have been impacted by opioids. He planned to share the information he learned at the training with them.

Zuniga said that while providing easy access to naloxone is sometimes viewed as enabling drug users, SCCDFCC views the drug as a “revolutionary” tool.

“We’re in the business of harm reduction. The more people we can get alive into treatment, we’re winning,” she said.

“We wouldn’t be in the situation that we’re at” in Arizona if it were easy to stop using drugs, she said.

The laws let physicians prescribe naloxone to a third party, such as a drug user’s loved one, she said. They also allow nonprofits and law enforcement agencies to order the drug with a doctor’s permission and let pharmacies provide the medicine over-the-counter, though not all pharmacies are on board. For example, while naloxone is available without a prescription at the Walgreens in Nogales, a prescription is still required at the local Walmart pharmacy.

How to respond to an opioid overdose

1. Confirm that the person has overdosed by rubbing their sternum. If they do not respond, proceed to next steps.

3. Deliver naloxone, if on hand.

4. Perform rescue breaths for patient. Tilt head back, pinch nose, form seal with your mouth and breath. Chest compressions are not necessary.