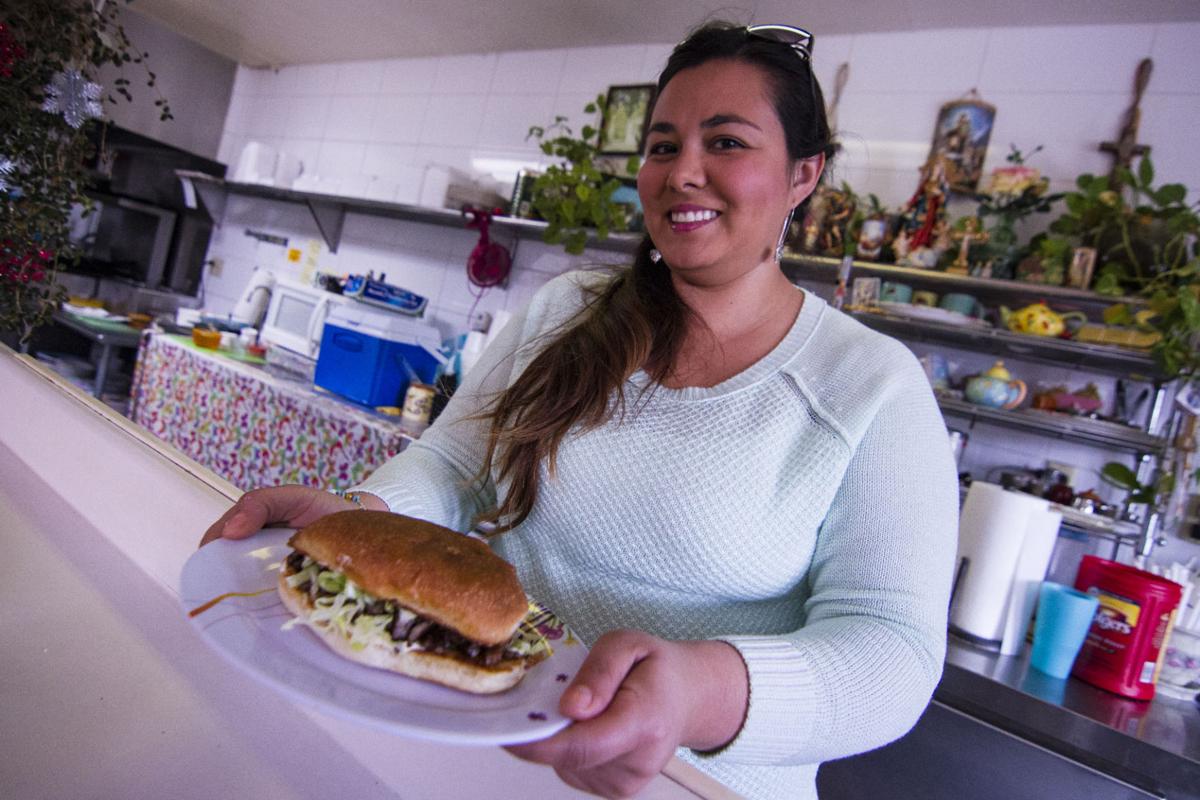 Maryzabel Martinez holds up a torta that she made for her two young children. Jardines de Mexico, which she runs with her mother, is known for the Mexican sandwiches. 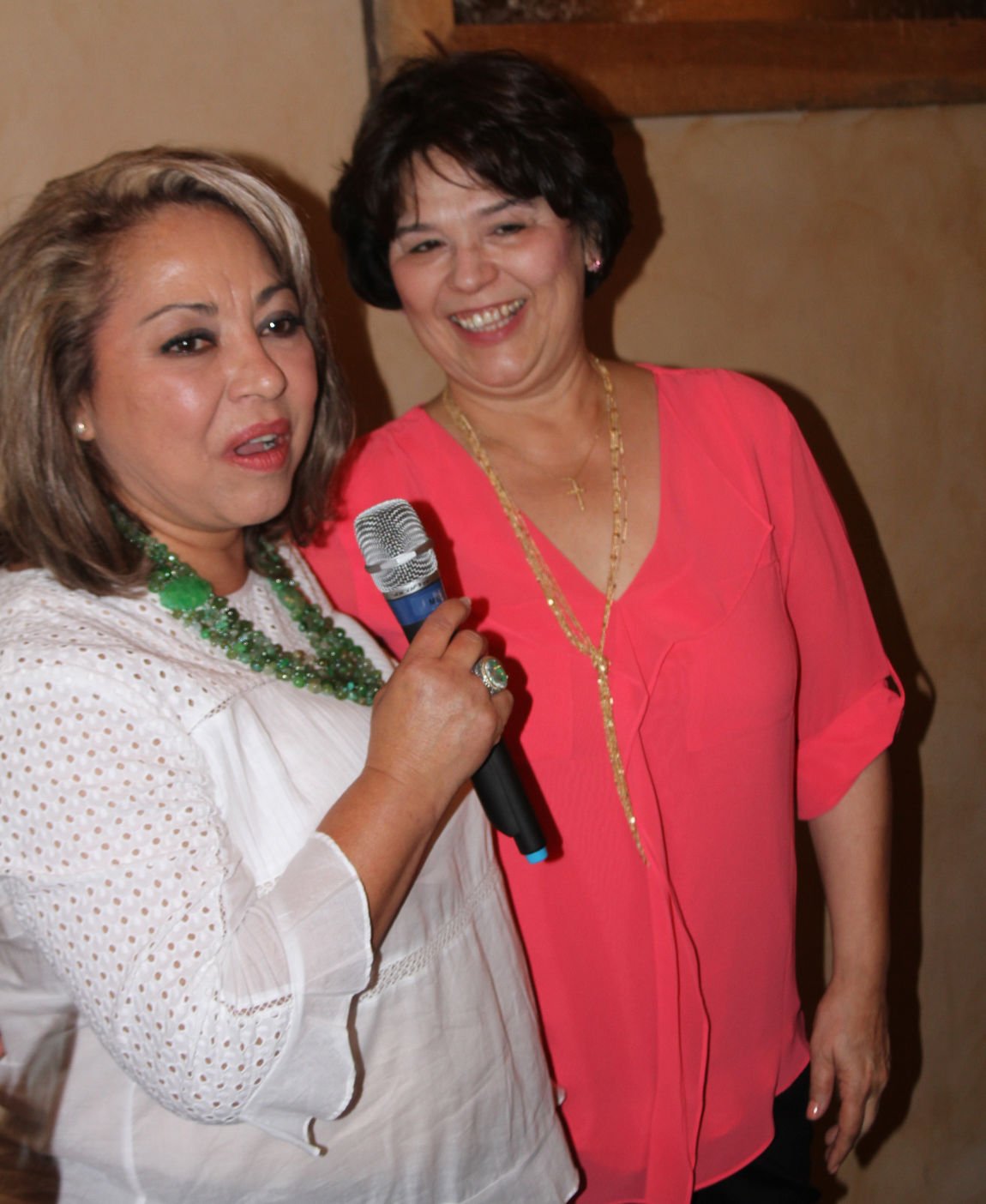 Seen here in May 2015, Olivia Ainza-Kramer, president of the Nogales Santa Cruz Chamber of Commerce, introduces Irene Pina, owner of Nogales Cleaners and Alterations, which was selected as a business of the year by the chamber. 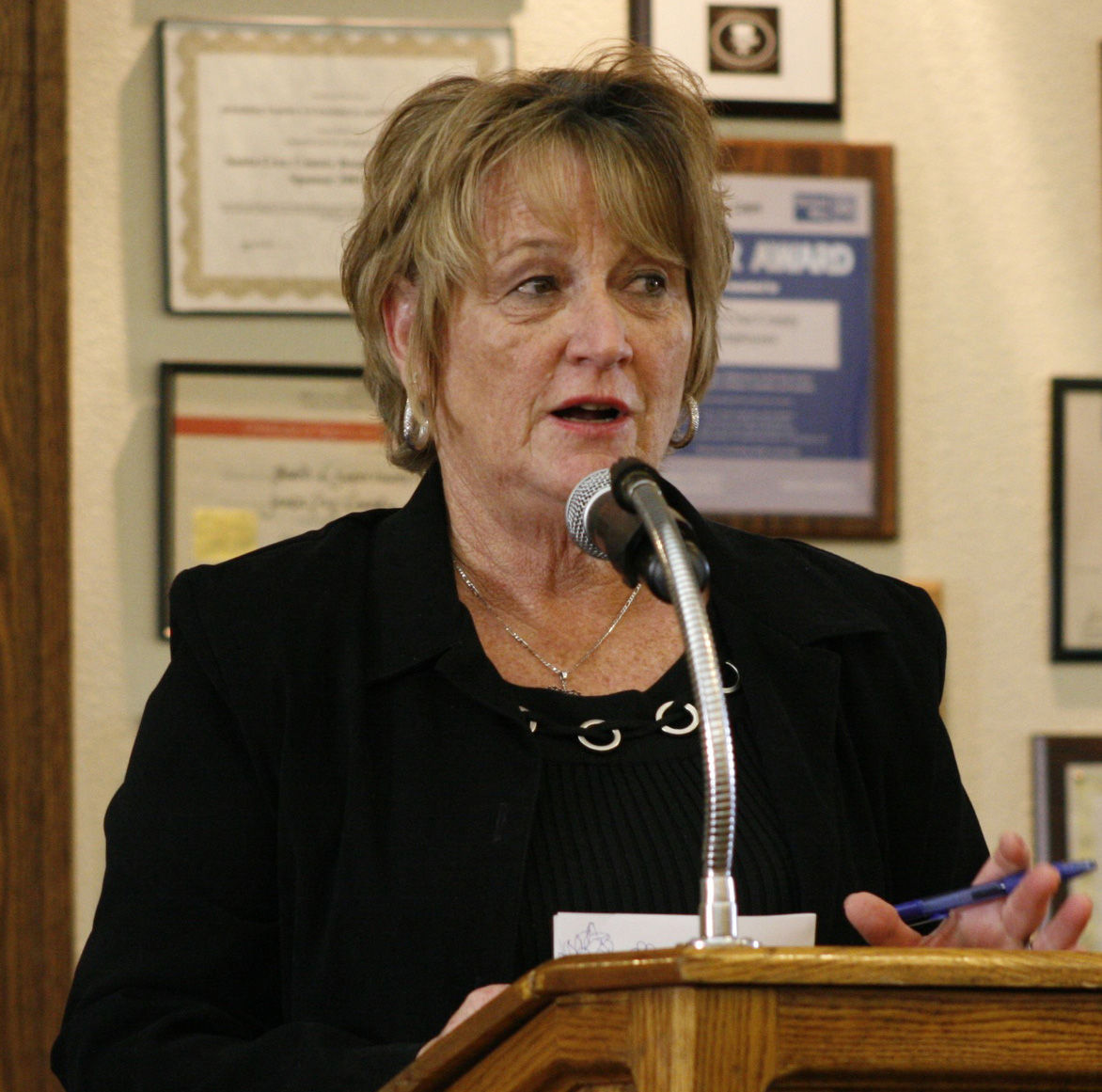 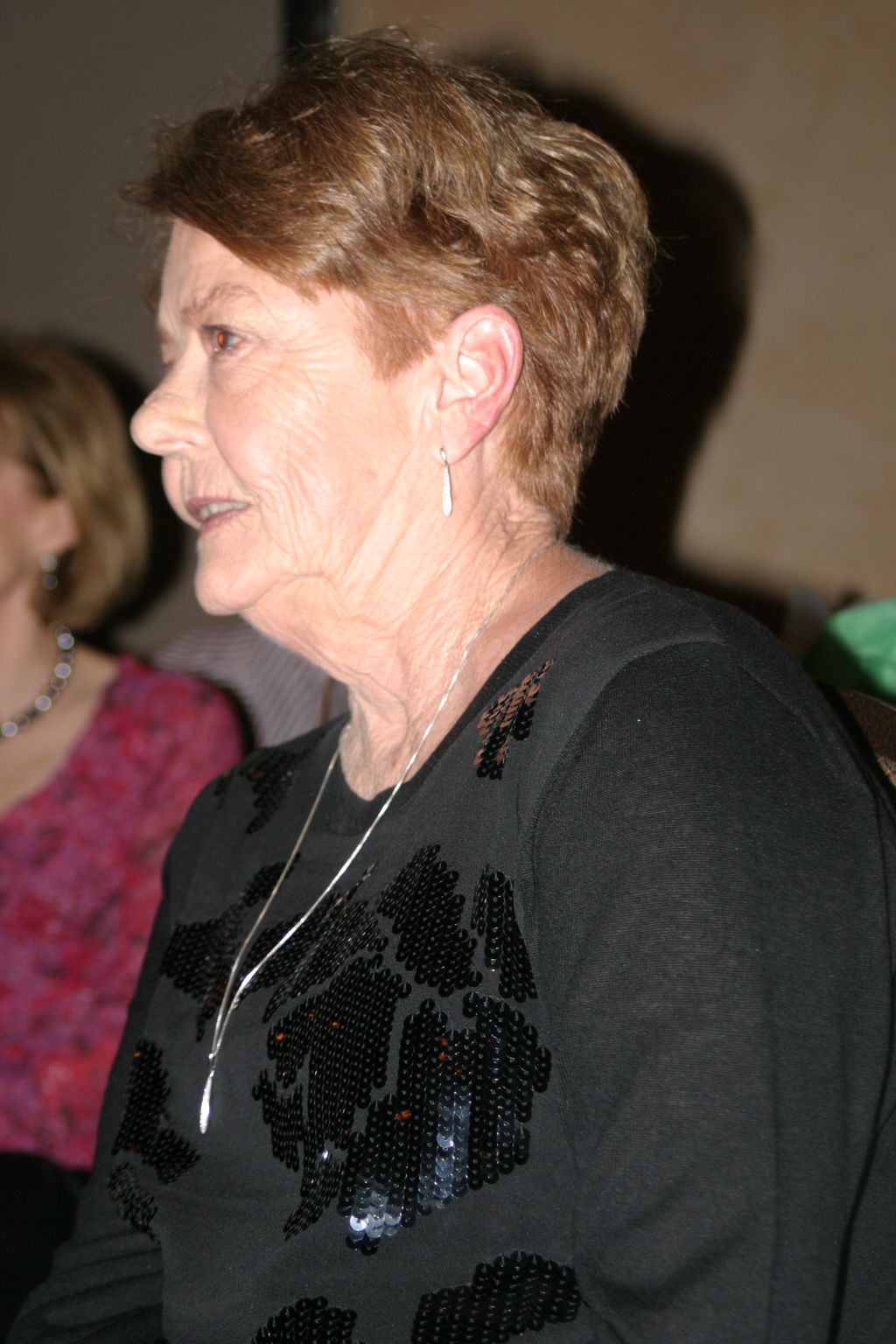 Juby Bell is owner of the Nogales Clinic. 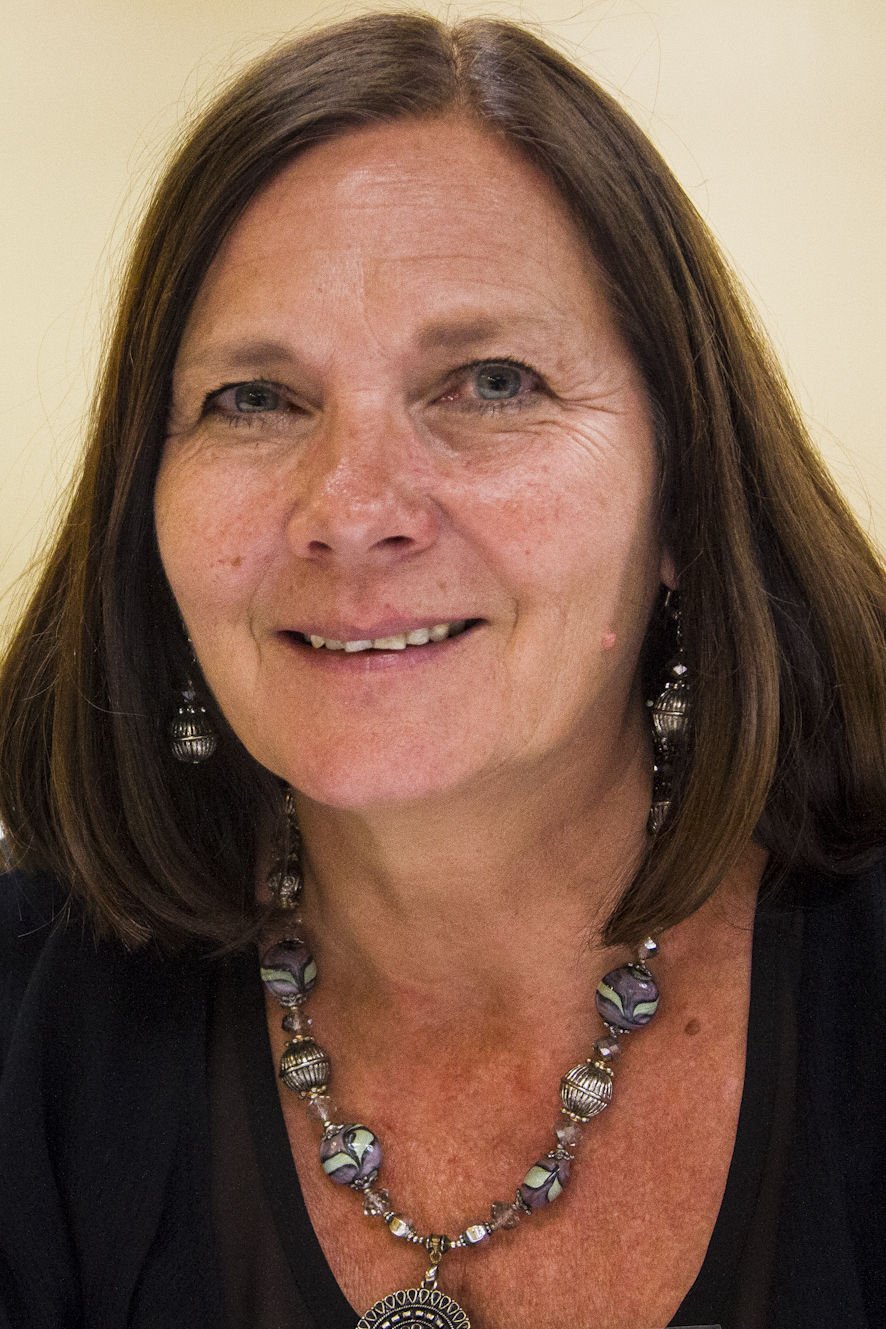 Maryzabel Martinez holds up a torta that she made for her two young children. Jardines de Mexico, which she runs with her mother, is known for the Mexican sandwiches.

Seen here in May 2015, Olivia Ainza-Kramer, president of the Nogales Santa Cruz Chamber of Commerce, introduces Irene Pina, owner of Nogales Cleaners and Alterations, which was selected as a business of the year by the chamber.

Juby Bell is owner of the Nogales Clinic.

Last May, Nogales Cleaners and Alterations, owned by Irene Pina, was recognized by the Nogales-Santa Cruz County Chamber of Commerce as one of two businesses of the year during a ceremony last May. Her award was presented by Olivia Ainza-Kramer, the chamber’s president and CEO.

At the Nogales Clinic on Morley Avenue, nurse practitioner Juby Bell sees between 20 and 25 patients each day at the clinic, which she’s owned since 2003. At the nearby Jardines de Mexico restaurant on Grand Avenue, Maryzabel Martinez, a 2004 graduate of Nogales High School, is next in line to take over the business her mother Alma Martinez founded 13 years ago.

In October, the Nogales City Council moved to re-establish an economic development advisory board to represent the community’s business interests. However, the city missed a chance at diversifying the group when all seven regular and alternate members it appointed to the board were men.

Despite the lack of representation on the board, women are at the helm of a number of Nogales businesses in sectors ranging from the produce industry to real estate. Still, in spite of their successes, some of these business leaders have had to prove themselves in their profession.

Ainza-Kramer, who has been at the chamber for nine years, said though she’s honored to hold the position, it’s been difficult at times.

“It’s been very, very hard,” she said during an interview at her office last Friday. “I’ve had to face many challenges. I’m working in a man’s world, but with the support of my team and the companies we represent, I’ve made it.”

“It’s OK now, but it took a lot of getting used to,” Hallman said of her experience leading a distributing company in a male-dominated industry. “You have to prove yourself, not in an aggressive, domineering, my way or the highway way. You have to show that you’re here, you’re serious and you’re here for the long haul, and ask ‘How can we work together and what can I do to help?’”

“It’s important that women are represented in different sectors,” she said. “We want women who are going to make a difference and create a balance with the men in our community.”

Ainza-Kramer said local organizations such as Circles of Peace and Zonta Club of Nogales provide job training for women and information on how to enter the workforce. Other organizations, like the Small Business Development Center Network, offer bilingual business planning courses for women looking to start their own businesses.

Nanci Pottinger, a former Zonta Club president, said the club meets with seventh- and eighth-graders and teaches them about their experience as leaders in the community.

“You need to make young women and girls know they matter in this community,” Pottinger said. “We’ve proven that a woman can do a man’s job.”

In 2001, Pottinger received her real estate license when she moved back to Nogales after spending nearly three decades in California. She later opened Noginan Real Estate, LLC., and now represents buyers and sellers while managing 90 properties.

“Keep studying, because definitely that would have been something that came in handy starting a business and managing a business,” she said, adding that after high school graduation, she went to massage therapy school where she learned some management skills but would have liked to continue schooling.

At Sierra Seed, Hallman employs eight people at the Nogales office and another 15 throughout Mexico.

Hallman is one of the few female members of the roughly 100-member Fresh Produce Association of the Americas. Other female FPAA members with companies based in Nogales include Alicia Martin of Wilson Produce and Rosie Cornelius of Bay Area Produce, said FPAA President Lance Jungmeyer.

Hallman, who previously served as principal at a K-12 school for students with special needs in Tucson, said working in Nogales was hard at first.

“It takes some time for people to trust you here and I get it,” she said.

Like many in the local import-export industry, Hallman inherited the family business.

“If you have a family business in this town, you’re in pretty good shape,” Hallman said. “Most of these people are second and third generation, myself included. If you aren’t in the family business, there are not a whole lot of other opportunities. By and large this community can be a challenge.”

Regardless of how someone got started, Hallman said, an important part about being a leader, whether male or female, is not being afraid to say: “I don’t know but let me find out,” and also not believing there is a job too small for you.

She also said having a team is crucial.

“You cannot be a leader by yourself. It’s a team of people,” she said. “My father had a great team. Without that team I wouldn’t be here.”

Like Hallman, Bell’s first year as owner of the Nogales Clinic after taking over for Dr. Karl Meyer in 2003 was “very difficult,” as she learned how to run the business. However, taking over the clinic is something she doesn’t regret.

“It was either that or close it down, and I didn’t want to do that,” she said, adding later: “I’m really happy with it. I enjoy it every day.”

Though she couldn’t recall any specific instances of machismo or gender discrimination, she said she was “too busy trying to survive” to think of that.

“I never felt that (being a woman) was an impediment. It was the contracts and keeping people employed,” she said about her experience as a women business owner.

Lee Ann Ayers, property manager at Mastick Trust and current Zonta Club president, said she grew up working in her father’s trucking business, and as a child she loved climbing on the trucks.

“I always had grease on my dresses, but my mom could get anything out of them,” she said.

During World War II when the men were overseas, Ayers said, her aunt ran the family business.

She said Nogales has always been home to “strong, working women,” naming women like Bell and Tila Escalada of Escalada’s Feed Store as examples.

“This is a great community for a business woman. Look at our doctors, our hairdressers, the women running the hospital,” Ayers said.

Like Ayers, Pottinger said she hasn’t faced any discrimination for being a woman but added that it has a lot to do with “your attitude.”

“I don’t think we have people closing the doors to anybody wanting to do better,” she said. “Just don’t give up and don’t be afraid.”

Pottinger, who said she enjoyed being her own boss, said in the local real estate industry, there are more women agents than men.