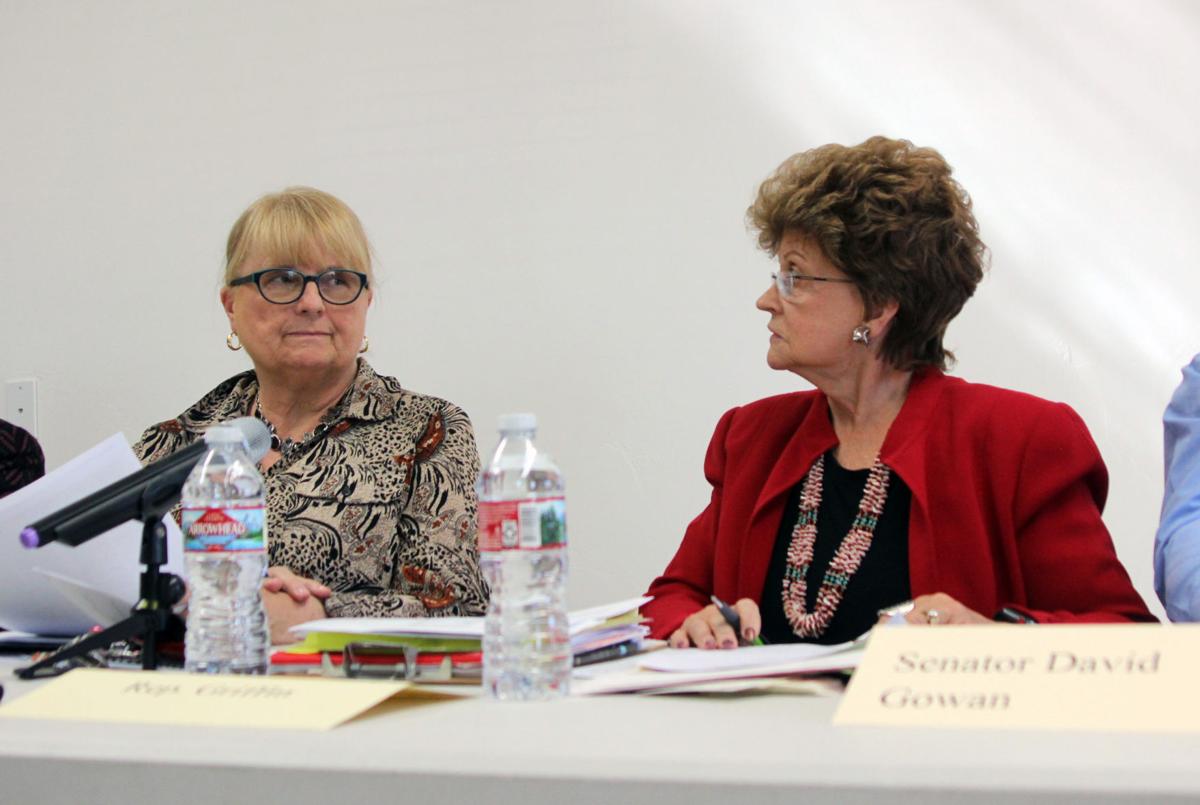 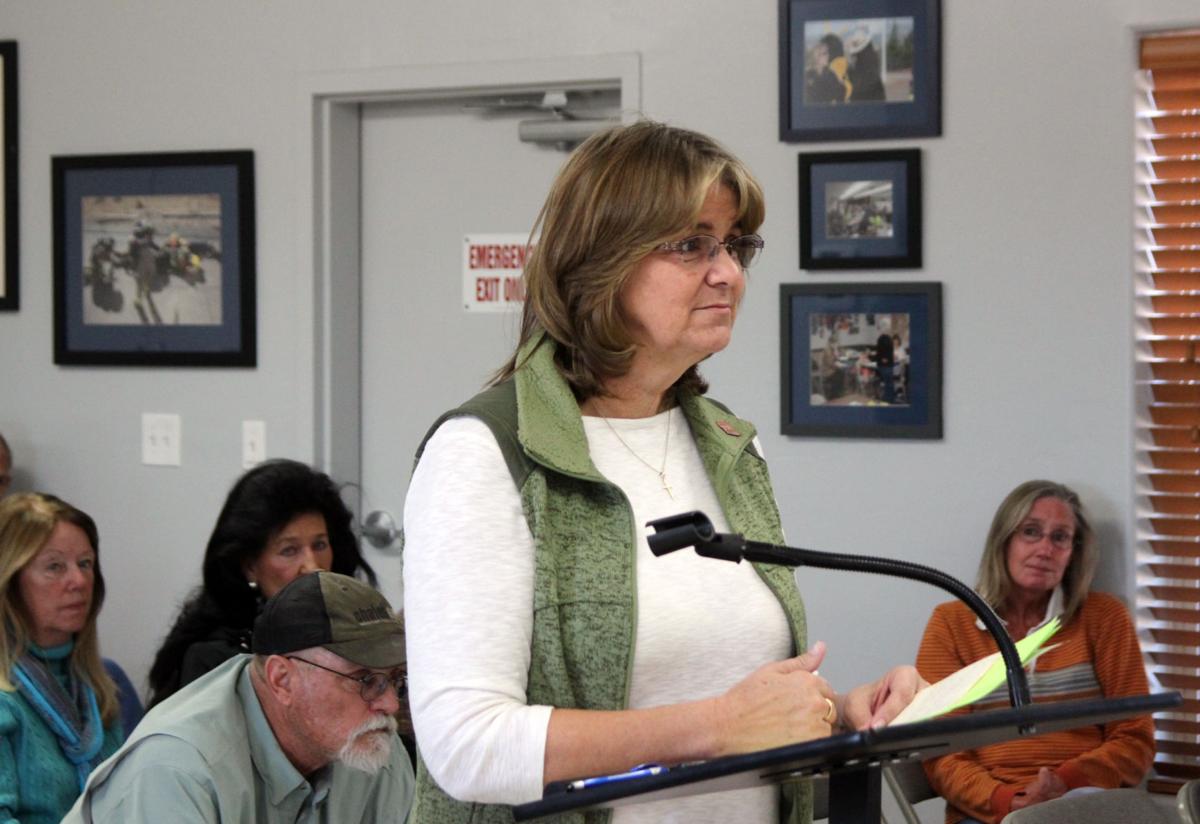 Sandra Ruppel isn't sure if it’s a good idea to move the Sonoita-Elgin area into Cochise County, but at Tuesday's meeting she said she was unhappy with the Santa Cruz County government. "I feel like we’re not represented by our county... we pay all our money and it goes over there and we don’t see the services,” she said.

Sandra Ruppel isn't sure if it’s a good idea to move the Sonoita-Elgin area into Cochise County, but at Tuesday's meeting she said she was unhappy with the Santa Cruz County government. "I feel like we’re not represented by our county... we pay all our money and it goes over there and we don’t see the services,” she said.

At the first public meeting of an ad-hoc committee formed to study moving part of Eastern Santa Cruz County into Cochise County, state lawmakers heard a lot of complaints from Sonoita-Elgin-area residents about their representation from the Santa Cruz County government.

Even so, of the 10 people who spoke up at Tuesday’s meeting, only two said they definitely support a move to Cochise.

“I’m still not sure what I think about the issue and that’s part of the reason I’m here,” said Sandra Ruppel. “What is apparent is there are a lot of emotions. Especially after the (Justice of the Peace Court) was cancelled here, I feel like we’re not represented by our county or our county representatives. That we pay all our money and it goes over there and we don’t see the services.”

The meeting, which drew about 30 community members to the Sonoita-Elgin Fire District station, marked a public step forward for a movement that has been percolating in the eastern part of Santa Cruz County for several years.

It’s fueled in part by frustration with what area residents describe as a lack of representation in the county government, which picked up after county supervisors voted last March to eliminate Sonoita’s Justice of the Peace Court.

In response, local residents brainstormed ways to address their concerns, with some discussing the possibility of having Cochise County annex land in the Sonoita-Elgin area.

At Tuesday’s meeting, area resident Gary Gilbert was one of two speakers who said they wanted to move to Cochise.

“My taxes continue to go up and I’m getting nothing for it,” he said. “My opinion is, I’m willing to roll the dice, I want to go to Cochise County.”

State Rep. Gail Griffin (R-Hereford) stoked the annexation flames earlier this year when she introduced a bill in the state House of Representatives that would have formed a committee to study the consequences of a potential move.

After the bill failed in the Senate, Griffin formed a special legislative committee called the Joint Ad-Hoc Committee on County Boundaries, saying that she was acting on behalf of concerned residents.

But it’s not clear how many residents in the Sonoita area – a rural region with a population of just over 800 – are up for ditching Santa Cruz County.

Bruce Bracker, the county supervisor who represents the Sonoita-Elgin area, asserted that there wasn’t much support for the secession movement.

“I think it’s a very small group of very vocal people,” said Bracker, a Tubac resident whose district includes eastern Rio Rico, Tubac and Patagonia, as well as Sonoita-Elgin. “And they are smart, they’re articulate, and they’re organized. But I don’t think that the overall feeling in the east county is that they want to leave.”

Laura Sink, who has lived in Sonoita for 35 years, said on Tuesday that "people are seeing the grass is greener on the other side. I feel very strongly that going to Cochise County is not going to solve our problems.”

But there certainly wasn’t a shortage of problems raised at the meeting, including rising tax rates, the shuttered Justice of the Peace Court, new regulations imposed on local wineries, and a general feeling of neglect by the county government.

“Representation in this area is the biggest problem,” said Francis Garcia, who said she has lived in the area since 1983 and is not in favor of moving to Cochise County.

Several speakers specifically called out Bracker, who was not at the meeting.

“The first time that I had ever met our representative, Mr. Bracker… he told me right to my face in no uncertain terms that we were a small portion of the part of the county that he governed and made it very clear that it wasn’t that important to him,” said Michele Cardillo, a longtime resident who supports leaving Santa Cruz County.

Speaking about Bracker, Ruppel added that “he made a big point of cheering himself that he had brought in two large commercial buildings into the Nogales area, which is great, but that helps commerce over there. It doesn’t particularly help commerce here. And so my concern is, how do we get an equity of services?”

Bracker told the NI that he spent Tuesday at an annual retreat with other county supervisors from around the state.

He said that he had talked with Griffin privately about the county-line committee. As for the complaints about representation, he added: “I return phone calls and I return emails and even if a constituent is mad at me, I'll sit there and have a conversation with them.”

Justifying her creation of the special committee to study moving the county line, Griffin told Capitol Media Services in September that Eastern Santa Cruz County residents “feel they have more in common with Cochise County.”

And a recent survey distributed by a local group included the question: “Are we a better ‘fit’ with Cochise County or Santa Cruz County based on: geography, culture, economic activity (wine/cattle), politically, fiscally?”

Gilbert – a veteran and the man who said he was willing to “roll the dice” with a move to Cochise – suggested that Sonoita-Elgin residents were wary of the Nogales area.

“There’s a joke going around that the Mexican mafia runs Nogales,” he said at Tuesday’s meeting.

Glenn Wolfgang, who also spoke on Tuesday, addressed the elephant in the room.

“Are eastern residents of Santa Cruz County afraid of Spanish speakers?” he asked.

“The only commonality the residents of Eastern Santa Cruz County have (with residents of) Cochise County is that we have an increased general ratio of white residents to Hispanics,” Wolfgang added.

That prompted a reaction from Cardillo, the resident who complained about Bracker.

“Whoever alluded to the fact that there might be racism here towards Hispanics – that’s ridiculous,” she said.

David Green, who has been involved in local organizing around annexation, told the NI after the meeting that the movement “has nothing to do with race.”

Asked what commonalities the eastern part of Santa Cruz County shares with Cochise County, Green pointed out that Sonoita and Willcox, a community in Cochise County, are both wine regions.

The Oct. 29 meeting was the first gathering of the special committee, which will form several working groups to study different issues related to moving the county line and is tasked with reporting on its findings by the end of 2020.

Griffin concluded Tuesday’s session by praising the wine industry in Sonoita and telling attendees: “You have a lot of things going for you and we want to listen to you.”

For some, that alone felt like a positive change.

Cardillo called out from the audience to thank Griffin for “saying those things about our area.”

“It should show everybody in this room something major about what representation really means,” she said.