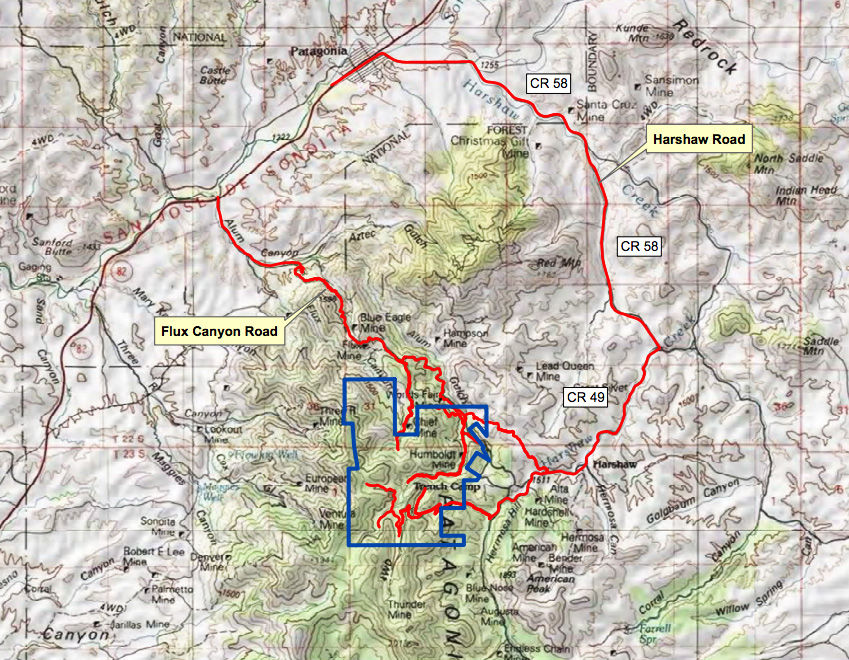 The drilling would occur at three sites within the claim area outlined here in blue. 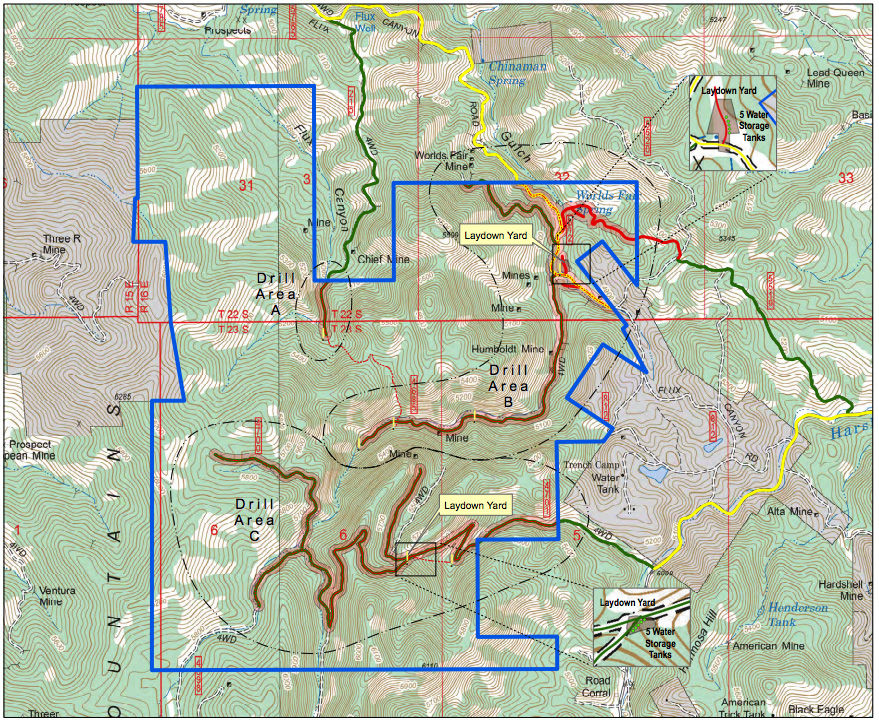 This map depicts the three proposed drill areas within the larger claim area.

The drilling would occur at three sites within the claim area outlined here in blue.

This map depicts the three proposed drill areas within the larger claim area.

Community members are invited to learn about and comment on a proposed exploratory drilling project in the Patagonia Mountains during a pair of upcoming public meetings.

The Sunnyside Exploration Drilling Project was previously stopped in its tracks when a federal judge ruled in 2015 in favor of the Defenders of Wildlife and the Patagonia Area Resource Alliance, which sued the U.S. Forest Service on the grounds that the agency had failed to conduct an appropriate environmental review, instead fast-tracking the Sunnyside project though a process called a “categorical exclusion.”

Opponents were concerned that the exploratory drill rigs would significantly impact the habitat of endangered and sensitive species of wildlife, including the yellow-billed cuckoo.

Now the project is back and being subject to public review, with two meetings scheduled as follows:

There will be brief presentations during both meetings at 5:30 and 6:30 p.m.

The current version of the project, proposed by a Nevada-based company called Arizona Standard, calls for up to 30 drill sites on Coronado National Forest land near Flux Canyon, resulting in ground surface disturbances totaling just less than 12 acres, the CNF said in an announcement.

“The proposal is for exploration work only, including drilling,” the CNF said. “No mining, milling or permanent facilities are being proposed.”

Regal Resources, Inc., of Vancouver, Canada, is the owner of the claim where the drilling would take place.

Access to the exploratory drill areas would be from Flux Canyon Road, Harshaw Road and Forest Roads 215, 812 and 4701. The proposed project is scheduled to be completed within seven years, the CNF said.

More information on the project can be found here, or at the Coronado National Forest Service Supervisor’s Office at 300 W. Congress St. in Tucson.

Written comments on the proposed project will be accepted for 45 days starting on Sept. 4.

Comments, including attachments, can be submitted electronically at cara.ecosystemmanagement.org/Public//CommentInput? Project=55719, or via mail or in person (8 a.m.-4:30 p.m., Monday-Friday) to the Sierra Vista Ranger District, c/o Rick Goshen, 4070 S. Avenida Saracino, Hereford, AZ 85615. Write “Sunnyside Exploration Drilling” in the subject line when providing electronic comments, or on the envelope when submitting comments by mail.

“Comments received in response to this solicitation, including names and addresses of those who comment, will be considered part of the public record for this project and will be available for public inspection and will be released if requested, under the Freedom of Information Act,” the CNF said.