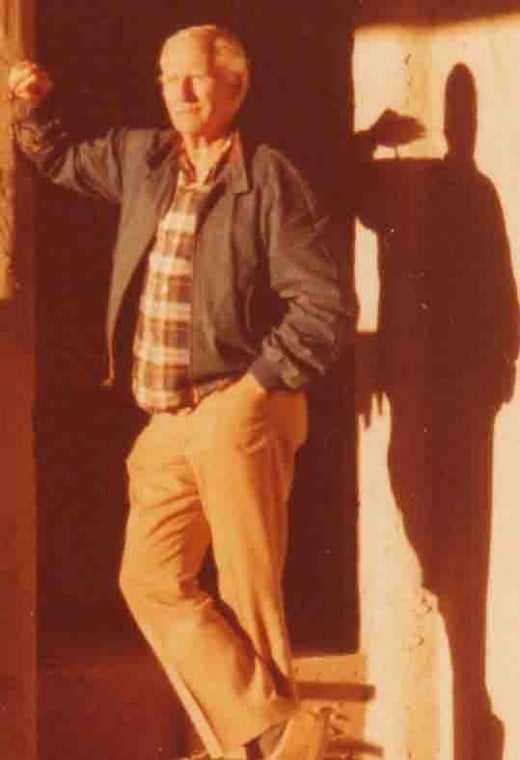 Duane Bryers is seen here in 1980 overseeing the construction of his home between Sonoita and Patagonia dubbed “The Mud Hut.” 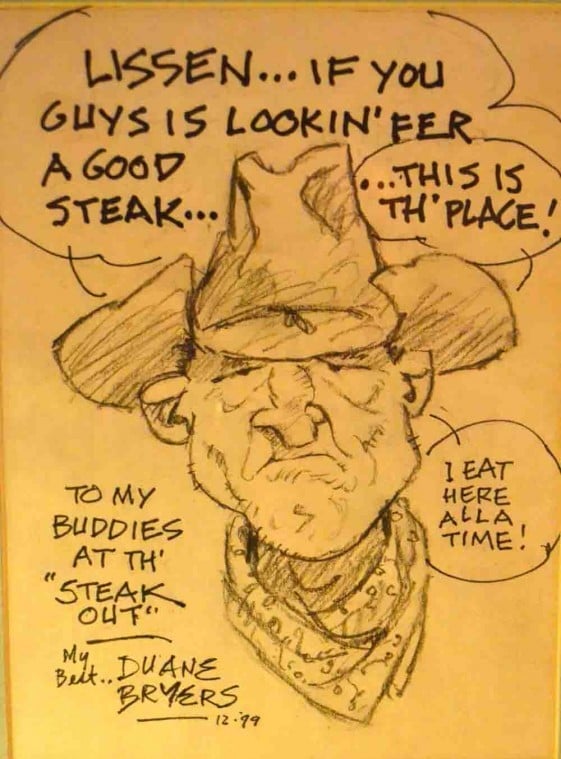 A quick draw with the brush, Bryers was known for presenting sketches to friends such as this one that still hangs in the Steakout Restaurant.

Duane Bryers is seen here in 1980 overseeing the construction of his home between Sonoita and Patagonia dubbed “The Mud Hut.”

A quick draw with the brush, Bryers was known for presenting sketches to friends such as this one that still hangs in the Steakout Restaurant.

Already remembered in the art world for his work, renowned illustrator, painter and sculptor Duane Bryers, who died May 30 in Tucson at the age of 100, will also remain in the hearts of locals for his friendship and contributions while living in the Sonoita-Patagonia area.

“He was a dear man who was loved by everyone,” said Sonoita resident Jo Anne Meyer, a friend of Bryers.

Raised in Minnesota, Bryers “discovered pencils, paper, and crayons at about age five” and never put them down, according to his bio in a of his books of illustrations, “The Bunkhouse Boys.”

Bryers initially made his name back east where, in 1942, he won a National War Poster competition in New York and then went on to illustrate the syndicated comic strip “Cokey.” He continued his colorful career as a commercial artist in Chicago, but by 1956 was back in New York creating what would become the ever-popular images of “Hilda,” a plump pin-up girl, for the Brown and Bigelow calendar company.

It was that breakthrough that eventually gave Bryers the freedom to move to Southern Arizona, where he expanded his talents as a freelance commercial artist and Western painter.

While Bryers maintained a home in Tucson, his stomping ground would also soon include the Sonoita-Patagonia area, where he built an adobe home in 1980 dubbed “The Mud Hut” with his second wife Dee. During that time Bryers made more than a few friends in the area, many of whom still recall his generosity, quick wit and salty humor.

Long-time friend Helga Bowman said Bryers once meticulously painted her up as a clown for a fundraising celebration at the Sonoita-Elgin fire station.

“It took him almost two hours, and when I walked in no one knew it was me,” she said.

Bryers also illustrated the covers of two cookbooks which were sold to raise money for the then-volunteer fire department, which in those days was often cash-strapped.

“He couldn’t talk to you without telling a funny story,” she said. “He had a jillion jokes up his sleeve.”

Elgin resident Keri Jelks recalled how she was mistakenly invited to a viewing of Bryers’ paintings that were being shipped off to the National Cowboy Hall of Fame in Oklahoma.

Upon discovering the faux pas, Bryers jokingly referred to Keri and Rukin Jelks that day as “The Gate Crashers.” The endearment would stick throughout their friendship which lasted over 30 years. During that time, Bryers traveled with the Jelks to Europe along with other artists and eventually painted what Keri Jelks described as a “candid portrait” of five of the Jelks’ grandchildren posing alongside a corral on the family’s ranch.

“I’m just thrilled to have it,” she said. “He was just such a delightful person and full of life always.”