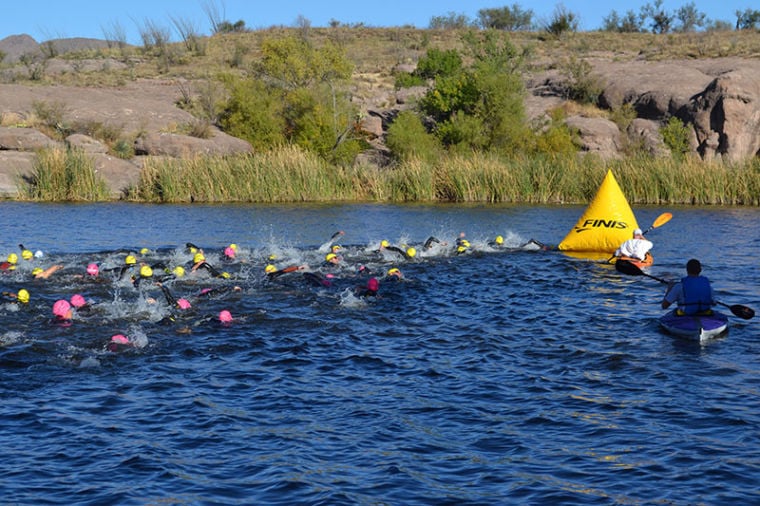 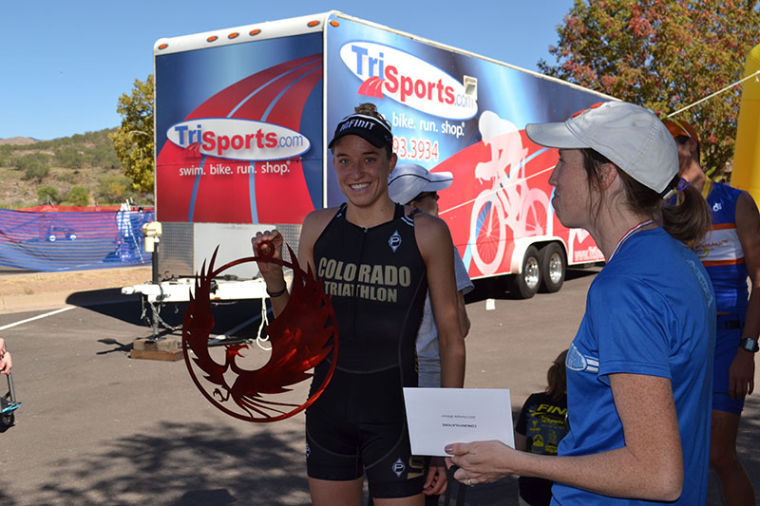 Brittany Warly, a 20-year-old University of Colorado student, was the winner of the women’s division. 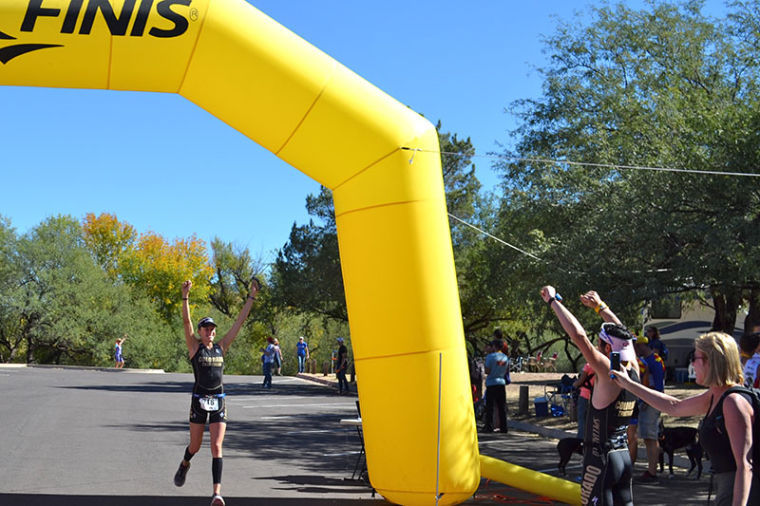 Brittany Warly is cheered as she becomes the first woman to finish Saturday’s race.

Brittany Warly, a 20-year-old University of Colorado student, was the winner of the women’s division.

Brittany Warly is cheered as she becomes the first woman to finish Saturday’s race.

After swimming 1,500 chilly meters across Patagonia Lake, biking a grueling 24.6-mile loop to the Town of Patagonia, and running a treacherous 10 kilometers across the Sonoita Creek State Natural Area, the verdict for Santa Cruz County’s newest triathlon course was: “It’s brutal.”

Nevertheless, 120 of the 123 contestants who started the competition on Saturday morning completed it.

The fastest time in the men’s division was posted by 22-year-old Ryan Petry of Tempe, who completed the course in 2:05:08.69. The leader in the women’s division, 20-year-old Brittany Warly of the University of Colorado triathlon team, finished with a time of 2:28:20.11.

“It’s a tough course,” said Warly as she caught her breath at the finish line.

The biking and running along the hilly terrain made for an especially challenging race, she said. “Lots of climbing.”

The race began at approximately 9 a.m. at Patagonia Lake State Park with swimmers easing into the lake in an attempt to get used to the temperatures that hovered around 60 degrees. Still, despite having donned wet suits, several expressed surprise at how cold the waters actually were.

The race was delayed slightly after a contestant who had dived in hit his head. But after being checked out, he joined the others as they cut the choppy surface and maneuvered around the first buoy.

The swimmers were already peeling out of their suits as they hit the beach and headed for their bicycles. Next they pedaled up a stretch of scenic State Route 82 lined with fall colors and crimson cliffs as they made their way towards the town of Patagonia. As they navigated the turnabout at Patagonia Union High School, they were greeted by a representative from the Border Patrol and young Border Patrol Explorers who handed out water.

“Holy (expletive),” said one contestant as he chugged a bottle of water at the halfway point. “Is this the end?” It wasn’t, and the cyclists continued the grind back to the lake, passing once more through town under the gaze of a few locals and visiting deer hunters who glugged their Joe, munched doughnuts and smoked cigarettes near the town market.

Cyclists were seen changing blowouts at the Telles family roadside shrine outside Patagonia and on the road to the lake, with some fellow competitors showing good sportsmanship as they slowed and offered help.

Meanwhile, the leaders were already shedding their bikes and hitting the desert trail run that took them along an undulating cactus-strewn section of the Sonoita Creek State Natural Area. The route including crossing over the archway pedestrian bridge at the lake before eventually sprinting back into the campground and around the last turn where family, friends, trainers and team members cheered and a DJ announced their finish.

Yadi Wang of the University of Arizona TriCat team described the first 4 miles of the biking portion of the race as “brutal.”

“After the swimming part you can’t feel your fingers or your toes and then you have to climb the hills – it’s really hard,” he said, adding that it was more difficult than any other course he’s done before.

Park Ranger Colt Alford said organizers did a good job making sure the event went smoothly, and fellow ranger Candy Bowen said staff at Patagonia Lake State Park ensured the race was fun and safe for everyone involved. As contestants crossed the finish line, Bowen said she was hopeful the state park would be slated for future races.

Kate Anderson, who organized the race, said a future triathlon has been tentatively scheduled for Nov. 1, 2014 at Patagonia Lake State Park.